EURO ICONIC MOMENTS: TOLDO IN PARADISE VS NETHERLANDS, ITALY IN THE EURO 2000 FINAL

Every professional footballer dreams of playing for the nation, to wear the iconic threads donned by the legends they grew up watching. Not everyone gets the opportunity in due time though.

But when the time comes, and the motivation peaks and one can even defeat the gods of the universe to achieve glory for the flag. Underdog tales are cherished for years to come, but the grit and determination along with some luck go unnoticed most of the time. Join us at FootTheBall as we reminisce one such chronicle.

It was the summer of 2000 and the Netherlands and Belgium were getting ready to host the Euros. The qualified teams were grouped and the preparations were in the final phase. A week before the opening match, Italy’s number one Gianluigi Buffon fractured a finger during a warm-up fixture and was ruled out of the tournament.

The former #Azzurri shot-stopper is 51 today 🎉

Italy’s usual second choice goalkeeper Angelo Peruzzi had disdainfully refused to be a backup and all eyes were now on Fiorentina’s 29-year old goalkeeper Francesco Toldo. He was finally getting his chance on the biggest stage, to represent his country in the Euros under the management of his idol Dino Zoff.

As difficult a keeper’s life is when he plays, it’s further difficult for those who never get a chance and live in the shadows forever. As was the case with Toldo, who watched a 20-year old Buffon take the front seat while sitting on the sidelines. Now his turn had come, rather unfortunately as a result of his compatriot getting injured.

The stage was set for him to prove his mettle, as he did. Italy went on to the quarter-finals undefeated in a group of Belgium, Sweden and Turkey while conceding just two goals in the process.

Italy started their EURO 2000 campaign in style with a 2-1 win over Turkey.#OTD | @azzurri pic.twitter.com/Mtl2caxhqR

In the quarter-finals, Italy was set to face an in-form golden generation of Romania, who had come thus far qualifying from a group of Germany, England and Portugal. The Azzuri kept the Romanians quiet that night while scoring two past them in the first half itself. Gheorghe Hagi’s sending off in the second half made the task easier for Italy as they comfortably held the scoreline.

Marching on to the semi-finals, Italy was ever confident as someone considered least likely to make it this far. They were to face the hosts the Netherlands who had thumped Yugoslavia in the last round, scoring six goals while conceding just one with a hattrick from star-man Patrick Kluivert.

The odds were stacked against Italy – a team which had come in the tournament with a third-choice goalkeeper and without favoured striker Christian Vieri. Up against the hosts, the mighty ruthless Dutch, who had beaten world champions France in the group stage. Netherlands’ squad was brimming with superstars like Dennis Bergkamp, Patrick Kluivert, Jaap Stam, Clarence Seedorf and legendary goalkeeper Edwin Van Der Sar.

Little did they know it was the day for another goalkeeper to shine.

Italy had a plan set-out, to defend as much as they can and make use of any opportunity they could fetch. Defending is native to Italian football as was attacking to the Dutch.As the match progressed the Oranje created chance after chance only for Toldo to save them all. An early Bergkamp attempt deflected off the post and Italy stayed alive.

In the 34th minute, Italy went a man down. Gianluca Zambrotta deservingly received his second yellow of the night for fouling Boudewijn Zenden. 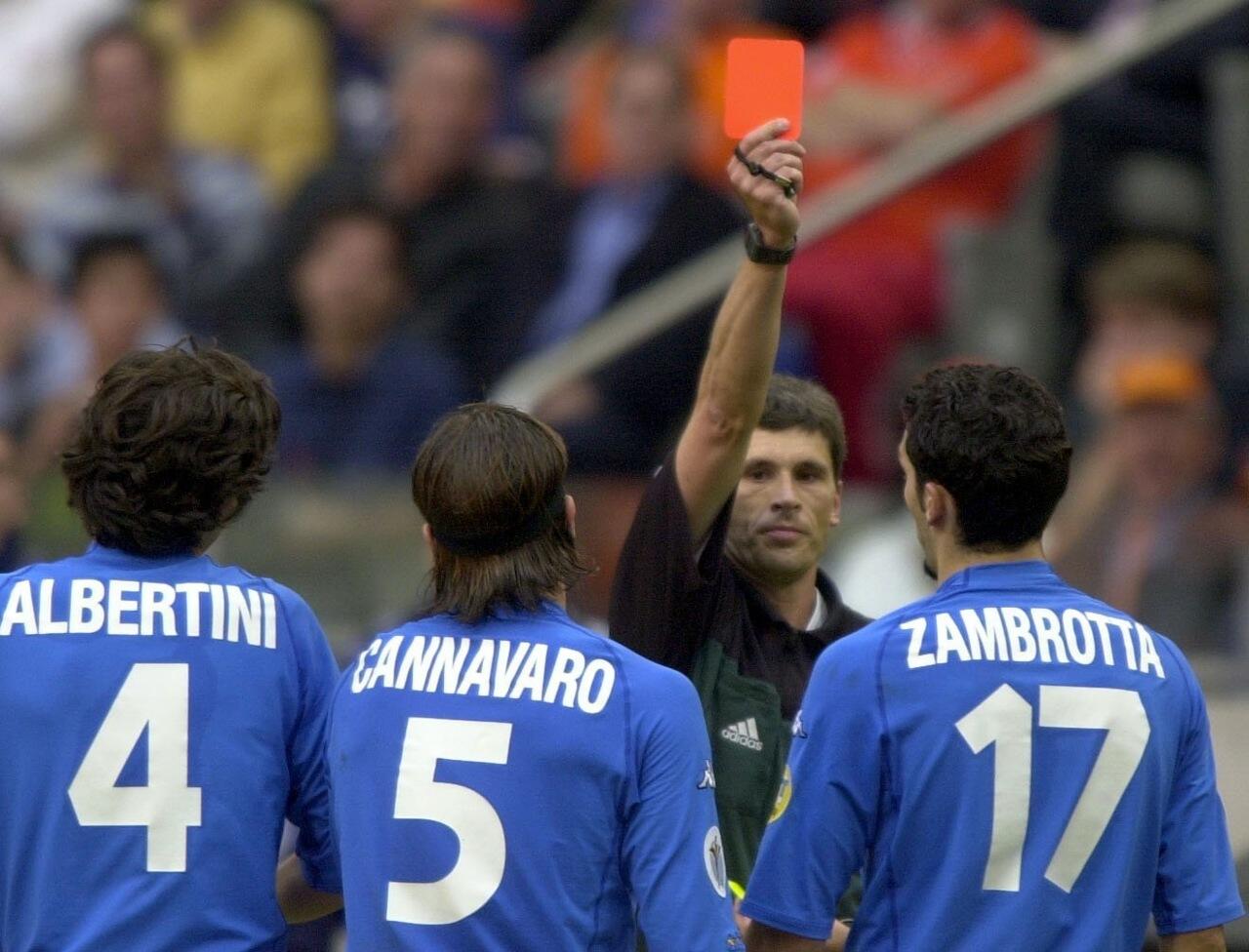 Zambrotta was shown the red card in the 34th minute (Image Courtesy: BBC/Website)

Careless from the Italian defender against a side that had scored 13 goals in 4 games in the run-up to the semis. Three minutes later, Netherlands got their best chance of the game as Nesta pulled Kluivert with his shirt and the referee pointed to the penalty spot.

In a heated argument over the decision, Toldo received a yellow card to his name.

Francesco Toldo had already made a few saves on the night but this was the moment that makes great players. Toldo stood on the goal-line as Frank De Boer took his run-up and smashed the ball with his left foot to Toldo’s left. The Italian had guessed it right as he threw his hand mid-air and punched the ball wide. A stunning diving save from Toldo kept the 10-men Italy in the match.

The half ended goal-less and the Dutch players were shaking their heads having not scored despite keeping the ball for long spells.

71% – The Netherlands had 71% possession in the Euro 2000 semi-final v Italy, the most of any team in a Euro knock-out game without progressing (since 1980). Harmless. #100DaysToGo #EURO2020 pic.twitter.com/iBmtgEnAfs

The second half saw a positive start from the Azzuri as they created a few minor threats to van der Sar’s goal and forced a couple of saves. Soon the game returned to its natural state and periods of attacks from the Oranje kept the fans on the edge.

A powerful volley from Zenden in the middle of the goal kept comfortably by Toldo among other innocuous attempts.

With 30 minutes remaining, Netherlands get their second penalty kick of the day, thanks to a late sliding challenge from Julian on Edgar Davids in the box. Kluivert stands upon the ball, gazing into Toldo’s eyes. This time Toldo is beaten, he dives the wrong way. Kluivert unfortunately though, could only find the upright and the rebound is cleared by a diving Maldini.

The Azzuri survived yet again.

The next 30 minutes saw some of the most beautiful defending from Italy’s disadvantaged side as they kept on stealing and clearing the ball back into the Dutch half.

Both sides failed to score at the full-time whistle and went the match into extra time with the golden goal rule still in play at that time. Extra time ended futile as neither side could still find the net despite getting decent chances.

Italy had successfully defended their goal against the tournament’s highest-scoring team for 90 minutes, two-thirds of it with a man-down.

Thanks to Francesco Toldo’s first-half penalty save and some magnificent defending from Maldini and Nesta. The Azzuri also had the post to thank for saving them twice. It was the end-game as both sides lined up for the penalty shoot-out that would send one of them through to the Euro 2000 final.

FEATURE | Italy at Euro 2000: How one evening in Amsterdam undid a decade of penalty failure.https://t.co/VNvlBhruZB pic.twitter.com/vDrN3MJS2j

It is Frank De Boer again, ready to take revenge and level the score for his side.

FRANCESCO TOLDO! The Italian was on fire as he saved another one from De Boer. A similar penalty and the same result. Once looked like already having a foot in the final, Netherlands were now trailing.

Jaap Stam skies one over the bar and the Amsterdam Arena is in shock. Italy now needed one goal and one save to reach the final.

Francesco Totti makes no mistakes with the Cucchiaio, famously known as the Panenka, as a diving van Der Sar embarrassingly looks at the scooped ball get in the past the goal line. 3-0 to Italy. 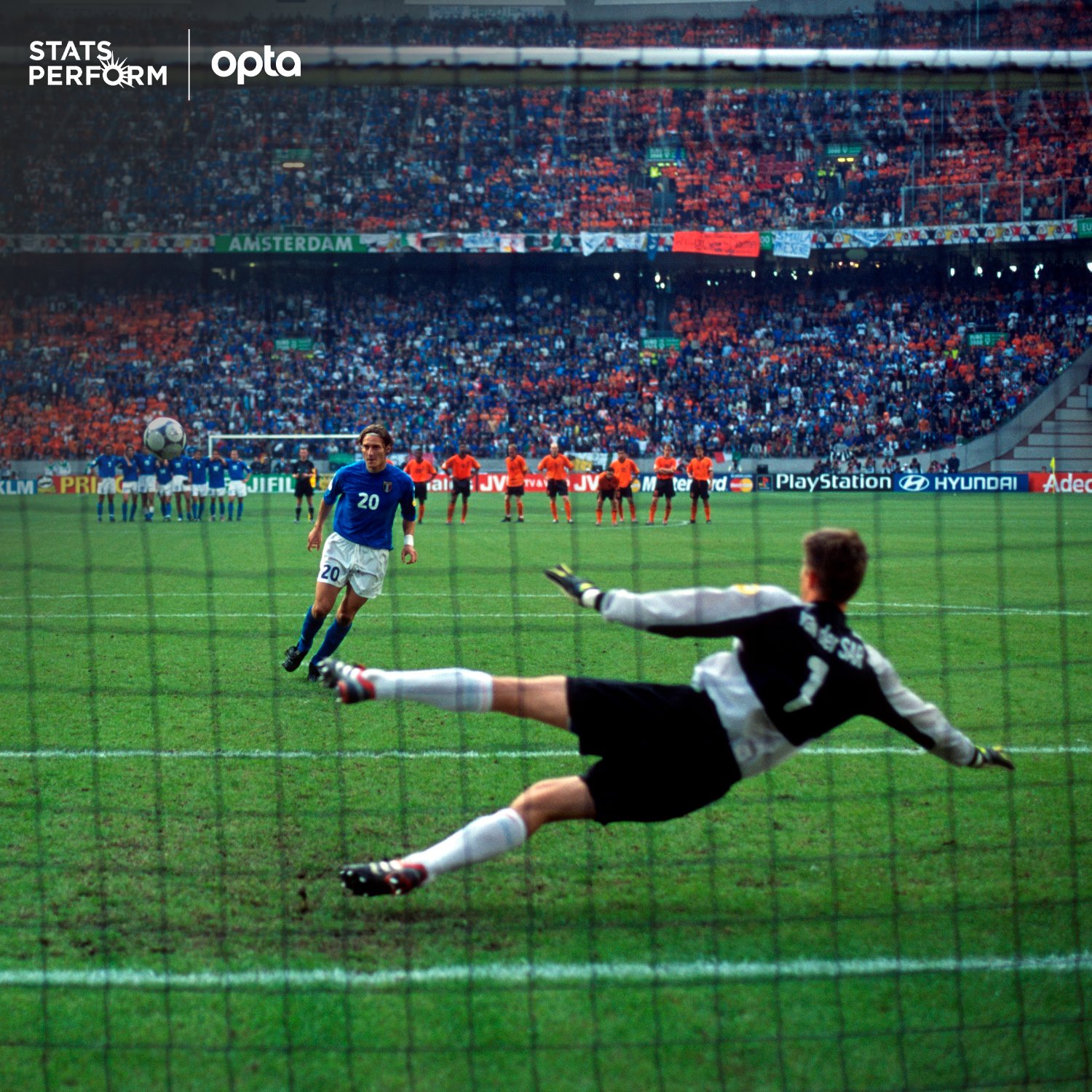 One Francesco had done his part and now it’s up to his namesake to do the remaining task and create history for his country.

It’s Patrick Kluivert, the second half missed-penalty that could have already won them the game stares right at him as he runs towards the ball and fires one past the in-form Toldo. The Netherlands finally managed to score with their fifth penalty of the game. It is Netherlands 1 – 3 Italy.

Maldini was denied from being the hero of the night as he saw his penalty getting saved by van der Sar. The captain failed to send his team through and the Netherlands just found breathing space.

It was written in the stars for Maldini to miss his penalty as how could he have taken the limelight away from their star of the night.

Paul Bosvelt aimed at his left bottom corner and shot one grounded bullet in a do-or-die penalty for the Dutch. Knock-knock! It’s him again. Francesco Toldo with another majestic save down to his right. 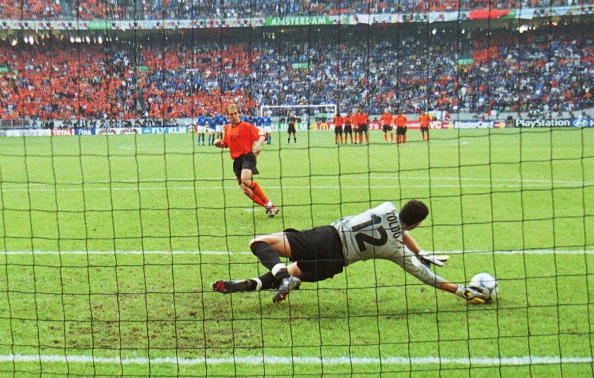 A third penalty saved by Italy’s third-choice goalkeeper. Poetic! The Blues of Italy march onto their first European final since they won it in 1968.

🇳🇱🆚🇮🇹 Toldo on EURO 2000 clash: "I really had fun that night. The more they were bombarding me, the more I was pumped to make more saves. Winning at their home after 120 minutes of assault was just beautiful."@azzurri | #NationsLeague pic.twitter.com/hUrS0qihCx

The world champions France defeated them in the final thanks to a David Trezeguet golden goal in the 103 minute. Italy might have lost the final but Francesco Toldo sealed his place in history. 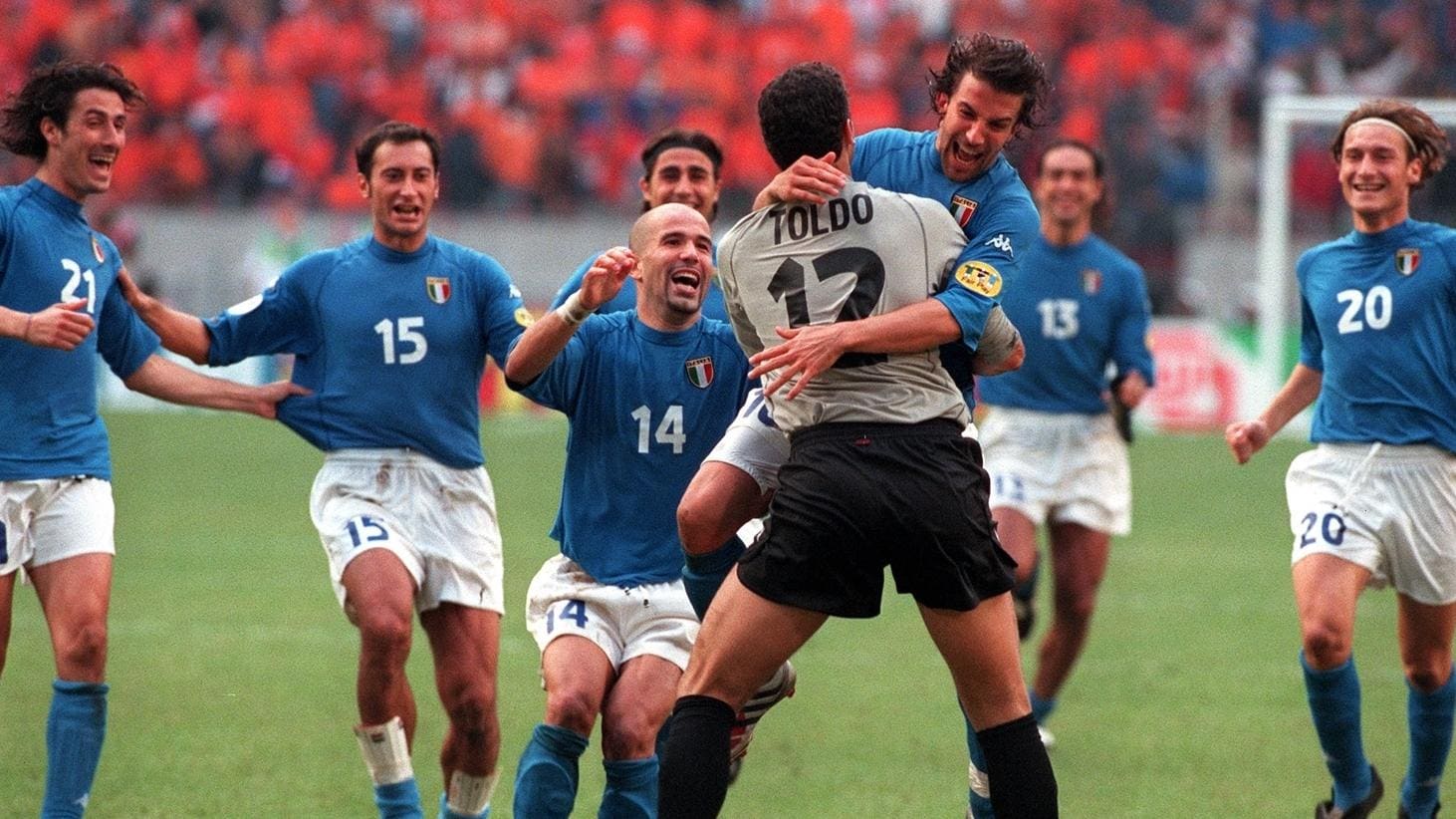 He gave football fans around the world a beautiful underdog story to remember and cherish for years to come.