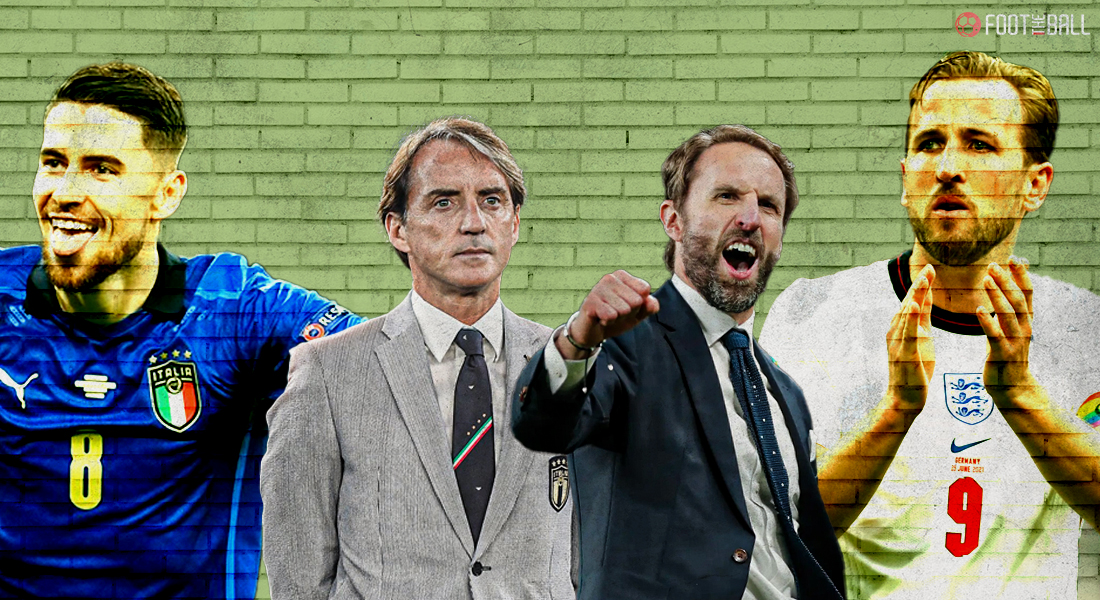 After a month of exciting international football courtesy of Euro 2020, the stage is set for one team to go all the way and take the trophy home. The Wembley Stadium in London will witness the blockbuster Euro 2020 final to be played between two of the best teams in Europe – Italy and England on Sunday, July 11.

A revitalised Italy came into the tournament on the back of 10 wins out of 10 in the qualifying rounds and stretched the winning run further by winning all six of their games at the finals. Italy convincingly defeated the World number one side Belgium 2-1 in the quarterfinal before a challenging night against Spain in the semifinal tested them to the limits. It didn’t, however, halt their progress as they prevailed over La Roja on penalties after a 120-minute stalemate and booked their place in the final.

Roberto Mancini has been hailed as one of the best coaches at the tournament and is on the verge of creating history if he takes Italy to European glory for the first time since 1968.

The boys were in the gym and on the pitch today at #Coverciano as they began their preparations for the final of #EURO2020 💪#VivoAzzurro #ITA pic.twitter.com/4CMw7lmuvU

However, it won’t be an easy task as England certainly have one of the most talented squads in the tournament and were among the favourites since the beginning. Gareth Southgate successfully realised the team’s potential and took them all the way to the final. It took a hearty win against Germany in the Round of 16, followed by a 4-0 bashing of Ukraine in the quarterfinal and a consuming semifinal tie against Denmark that needed an extra-time Harry Kane winner to send England through to their first-ever Euro final.

You won’t have missed it, but we just want to remind you…

The #ThreeLions will take on Italy in the #EURO2020 final on Sunday!pic.twitter.com/6meFsHlr0m

The English team has the hopes of the 56 million Britishers on their shoulders who dearly wait for the trophy to finally come to what they consider to be the home of football.

It is predicted to be an intense tactical battle as both teams and their coaching staffs have had ample amount of time to analyse and prepare for the opponent.

The Azzurri will be without one of their key players, Leonardo Spinazzola who got injured in the quarterfinal against Belgium. Alessandro Florenzi remains out with the injury that he suffered in the group stage. There aren’t any new additions to the troubling list for Roberto Mancini and there are no suspensions either.

Mancini is expected to go with the same 4-3-3 formation that has given them the stability in defence and dynamism in attack so far, with the midfield engine Jorginho at the heart of the team.

There aren’t any injury concerns for the Three Lions and a full-strength lineup is expected. No absentees due to suspensions either for Gareth Southgate as he prepares his team for the final.

Anyone else waking up with a huge smile on their face? 😄 pic.twitter.com/1TbFT9ZIOc

Southgate has tried a 4-2-3-1 and a 3-4-3 formation during the tournament and found success in both with the squad depth at his disposal. He is expected to field a 4-2-3-1 in the final.

The 23-year old winger scored Italy’s only goal against Spain in the semifinal that gave Italy the lead amid the constant Spanish pressure. He is a great source of energy for the Italian attack that likes to keep more of the ball and find spaces between the lines with quick one-twos and through balls. Chiesa is a natural winger who likes to dribble his way past defenders, cut in and find shooting spaces or find the final pass to set his teammates up.

He will be a big threat to Jordan Pickford’s goal that has only seen the ball go in just once in the tournament so far with his speed, skill, and finishing. He has already scored two crucial goals for the Azzurri in this tournament and he might be the difference in the final as well.

England’s captain and star marksman carries the biggest threat for the Three Lions whenever he’s on the pitch with his unmatched overall ability. A classic number 9, Kane drifts in and around the box to get into dangerous shooting positions or draw defenders for his teammates to exploit. His tall physique will be a challenge for even Bonucci and Chiellini to cope with.

🏴󠁧󠁢󠁥󠁮󠁧󠁿 Involved in the first goal, scored the all important second and made England history in the process. Harry Kane = Star of the Match 🥇

The Tottenham man has immense strength that allows him to shield the ball with his back towards the goal and set his quick teammates up. Like England, Italy too have had a great defensive record and Kane will have to be at his best to get past the tall frame of Gianluigi Donnarumma. The England captain has got on the scoresheet four times in the tournament so far and Southgate will be hoping for more in the final.

It is nearly impossible to predict finals and especially when it is as balanced as this one. Italy and England have been the most entertaining sides in the tournament in all aspects of the game. They have displayed some of the best attacking football and also shown great composure in defending close leads when needed. Both the teams stand at the cusp of success and the final will be decided on small margins and tactical duels between the two managers. England is at a slight advantage with the final being played at their home stadium and they might finally bring it home this time.

FootTheBall predicts a 2-1 win for England over Italy in the final of Euro 2020.