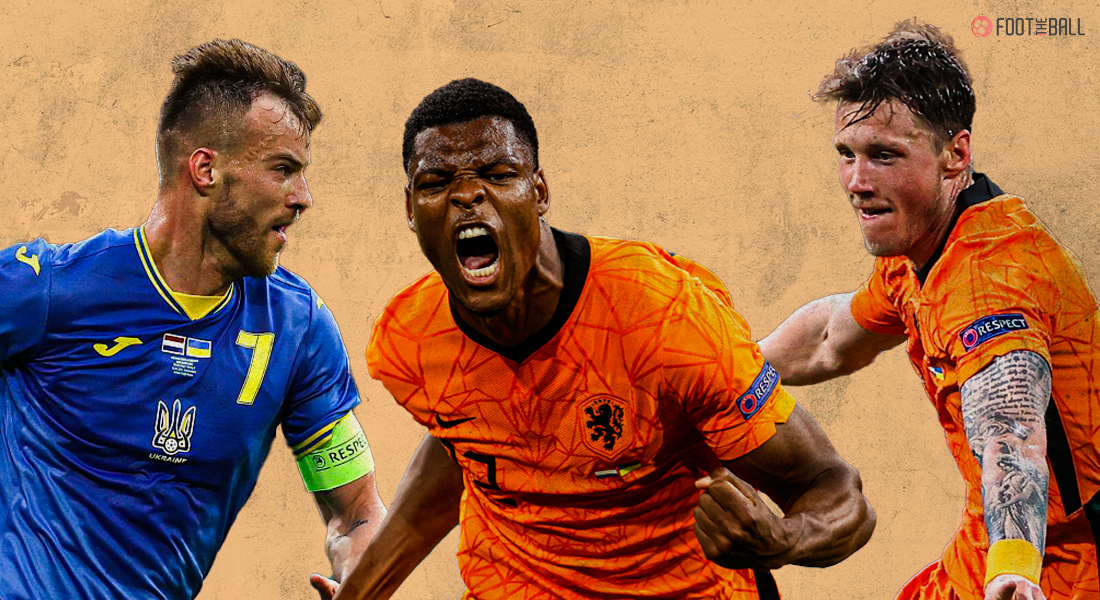 Netherlands met Ukraine in the second match of Group C in Amsterdam. This was the first such meeting between the two nations at a major tournament.

The first shot at goal came inside two minutes. An errant back pass set Depay off at the Ukranian defence and his left-footed shot was well gathered by the goalkeeper. Dumfries was the next to try his luck, his effort saved again by Bushcan with the Dutch clearly on top. Wijnaldum blazed over from inside the box with Ukraine struggling to assert themselves.

Things got worse with Ukraine forced into an early change, with Zubkov replaced by Marlos. The game got a bit more evenly balanced after that, as both teams looked to get the first goal. There was enough pace across the pitch to make it end-to-end as the game entered the first half-hour. The Dutch skipper forced another brilliant save from Bushcan near the 40th minute mark before Dumfries headed wide after being left unmarked near the goal.

Close! Dumfries fails to find the target at the back post after meeting Depay's cross 😮#EURO2020 pic.twitter.com/SK96hnwYu1

Yarmolenko forced a decent save out of Steklenburg at the other end, with both teams heading into halftime all square.

The second half got underway in a much more cagey manner with both sides wary of not conceding early. That changed quickly enough with Dumfries being set off down the right at pace and his pull back was palmed at by Bushcan. The ball went away from Depay and straight to Wijnaldum who blasted the ball home. Weghorst again worked the keeper who took a good catch.

The second goal soon arrived with Dumfries and Mykolenko getting into a tangle near the goal. The ball came to Weghorst who smashed it in to take a seemingly unassailable lead.  The game went much the same way after that with Ukraine rarely threatening till 15 minutes from time. Yaremchuk fed Yarmolenko and the West Ham man curled a supreme shot into the top corner. That was just the start though.

With Ukraine winning a free about 30 yards from goal two minutes later, Malinovski whipped the ball in and it was headed in by Yaremchuk to level the scores at 2-2. Just as the Dutch were on the backfoot, they were gifted a route back into the game. Bushcan, who had performed so well, lackadaisically gave the ball away to Wijndal. He passed it to Ake whose first time cross was headed home by Dumfries from inside the box.

There was to be no further comeback for the visitors with the Dutch able to hold on for a famous win and the best of starts to their tournament. For Shevchenko and co., they will rue the manner in which they conceded all the three goals which could have been avoided with better defensive planning.

Here are the three key takeaways from this rollercoaster of a match:

The first ten minutes of the match would have felt like an eternity for Ukraine. Netherlands had seven shots in total, and would have scored a few if not for Bushcan. Ukraine simply were unable to deal with the pace and intensity of the attack by the Dutch. Depay, Dumfries, Wijnaldum all went close with the first goal seeming destined to come. The storyline remained same for much of the half, with the wingbacks being especially adventurous. They got their goals in the second half and it was in the end, a pretty much expected result from the first whistle.

This would certainly have been what Frank de Boer wanted since he knows the attacking talents of his squad will be key if they are to go deep into the tournament. Their high pressing and tempo to break quickly will make them challenging opponents as the tournament rolls on. The defence will be one area where De Boer will be keen to plan better, as they were caught out on both goals. Dumfries’ goal ensured that the plan of hitting your opponents with speed will remain the norm in upcoming matches as well.

UKRAINE ARE NO PUNKS

Though they were hanging on for dear life at one point, Ukraine have a few aces up their sleeves when it comes to their forward line. Yaremchuk, Yarmolenko, Marlos all showed their skills in patches when they did have the ball near the penalty box. However, their main area of concern will be the lack of domination over the ball in midfield. They were unable to really assert themselves and keep possession, thereby relying on counter attacks to break open the Dutch defence throughout the first half period. However, their goalkeeper could only do so much as Shevchenko’s side did concede a quick double.

5 – Andriy Yarmolenko has scored the first goal for Ukraine at the EURO since his current manager Andriy Shevchenko in June 2012 against Sweden, ending a drought of 5 games without a goal for his country, the longest one ever in the competition. Disciple. #UKR #NEDUKR #euro2020 pic.twitter.com/WUVeVq2XwK

With the game seemingly dead, Yarmolenko struck a magnificent curler in the 75th minute to get them back into the game. The comeback was complete barely minutes later when Yaremchuk headed in a vicious free kick. The Dutch were left shell-shocked but it was a Ukrainian mistake that allowed them to snatch the win. Bushcan, arguably Ukraine’ man-of-the-match, would be unhappy with how he gave the ball away for the winner as Ukraine look to put things right next time around.

NETHERLANDS AS A DARK HORSE?

Yes, it was just the first match but the signs were all good for the Oranje. They won their first match at the Euros since 2008 and look hungry for more. The stars in their squad are some of the world’s best, with Depay and Wijnaldum at the heart of everything good tonight. The explosion of Dumfries on the right will be of much joy for De Boer, the PSV captain attacking at every opportunity. Despite conceding twice in quick succession before eventually grabbing the winner, Stekelenburg looked assured on the ball while Timber will become a mainstay for years to come. If they can perform at this level or beyond in their remaining group matches, how far they go into the tournament is anybody’s guess.