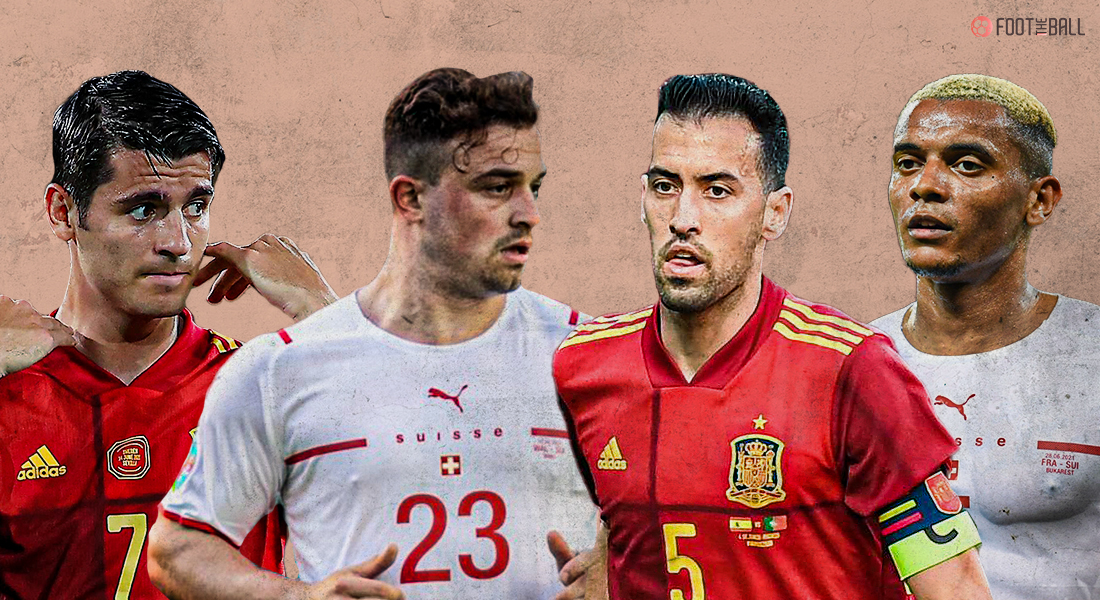 UEFA EURO 2020: SWITZERLAND VS SPAIN, THREE KEY ON-FIELD MATCHUPS TO LOOK OUT FOR

Spain and Switzerland were co-authors of what was perhaps the finest matchday in major international tournament history.

Spain were able to overcome and eliminate Croatia from Euro 2020. An eight-goal thriller was witnessed by Copenhagen as Spain won 5-3, with both the nations giving it their all till the final whistle.

While Switzerland defeated World Champions France on penalties in what was probably the tournament’s biggest upset. They fought back from a 3-1 deficit to level the game at the end of the normal time, and went on to shock the world by eliminating Les Bleus from the tournament after winning 8-7 on penalties.

Two teams that battled until the bitter end and demonstrated their grit in the most difficult of trials are placed against each other in the quarter-finals.

FootTheBall has identified three key matchups that might be crucial in deciding this encounter.

Switzerland will encounter Spain without captain Granit Xhaka, who has been banned for one match after collecting his second yellow card of the tournament against France. After delivering one of the finest performances of the tournament in the Round of 16, his absence leaves a massive void.

Fair to say, Xherdan Shaqiri will be the beacon Switzerland will turn to in the absence of their captain. The 29-year-old proved pivotal for his nation in the group stages, helping them finish third and qualifying for the knockout stages. It ain’t an international tournament if Big Shaq doesn’t score a banger at least once. He did exactly that against Turkey and took the “Dark Horses” for a ride.

He may not get ample playing time at Liverpool, but for Switzerland, number ‘23’ is exactly what Michael Jordan was for the Bulls. Spain would be a tough matchup with or without Xhaka, but it isn’t over until Shaqiri is on the pitch, since coming up clutch is what he has done for his country.

With Shaqiri being deployed behind the Swiss attacking line, him and Busquets are bound to come face to face more often than not, and it would be up to the holding midfielder to slow Shaqiri down.

Busquets delivered a masterclass in Spain’s Round of 16 victory over Croatia. Renowned for his ability to evade pressure, Busquets is also second to none when roles reverse. His expertise to exercise pressure is unmatched and that was at display in his man of the match display. Despite being the deepest midfielder, he leads the press surges and controls the timing to close the gaps.

Sergio’s football isn’t one made for highlights but as the great Johan Cruyff said: “Playing football is very simple, but playing simple football is the hardest thing there is”. This is what most distinguishes Sergio and his unique approach. La Roja has looked like itself again after Busquet’s return to the lineup.

In matches against Slovakia and Croatia, Busquets organised Spain, disorganised both the teams, and greatly increased the game’s rhythm. He twisted his ankle and controlled the possession, making it faster and less horizontal than in previous matches against Poland and Sweden without him. He offered intentionality, security, and clarity on the ball, which are his strongest suits.

The matchup between Shaqiri and Busquets is the one to monitor the most.

Alvaro Morata hasn’t been firing on all cylinders and has missed clear-cut chances more than he ever has. However, He is a proven deadly finisher of the ball who can pose a major threat to opposing defences. Despite missing chance after chance, the striker has two goals in the tournament, with his most recent goal coming in Spain’s victory over Croatia, where he netted the fourth goal and handed Spain the decisive lead in extra time.

A tireless performance capped with a goal. 👍 pic.twitter.com/mk3CwvhQNd

Morata is a predator in the opposing penalty box on his day, sensing space and opportunity and attempting to be more influential off the ball. Nonetheless, at 28 years old, his instincts for detecting a goal-scoring opportunity remain outstanding, which explains Luis Enrique’s constant confidence in him.

The challenge of limiting the attacker would be in the hands of Manuel Akanji, the Swiss defense’s commander. The Dortmund defender is a physical specimen at the base of the field. With a towering height of 6’1 and great physical strength, attackers have a hard time getting past him. Although, his superhuman-like stature and size may be deceiving since Akanji is incredibly fast. His sprint speed is quite quick, and he seldom loses a footrace.

However, he not only outruns his rivals, but he can also outmuscle and outjump them. One underappreciated trait of his repertoire is his stability and passing of the ball as he is quite adept at controlling the tempo from the defense for both Dortmund and Switzerland. That would not be the case against Spain though, since La Roja is renowned for controlling the game through possession.

As Spain has now scored 10 goals in their previous two matches, Akanji will want to keep the attackers, especially Morata, in his pockets and deny him any goal-scoring opportunities.

Whenever Switzerland have found themselves in a dug hole, Haris Seferovic was there waiting with a rope in his hand ready to rescue the Swiss out. Granit Xhaka dominated the stage, but his two goals against France were decisive. With three goals, the Benfica player has carried his outstanding club form into Euro 2020 and has been cooking the opposing defences.

He’s been a nightmare for his opponents, with destructive surges into the box and playing on the shoulders of the final man. When the attacker is in full flow, he is a hard man to slow down.

Although the Spanish defence boasts a number of players who can slow Seferovic down, one of them being Aymeric Laporte. The defender has had a decent Euro 2020 until now in his new national threads and even bagged his first goal for Spain in their 5-0 victory over Slovakia. Despite a poor performance against Croatia, the main reason being fatigued legs, Laporte is as reliable of a defender as they come.

Injuries, frustration, anger… and then one goal, and he gets a moment of pure joy. You've got to love that.

Laporte exhibits a high level of qualification when it comes to possession-based football. He wouldn’t play for City if he didn’t have that because The Citizens typically have the upper hand in possession. The scenario is similar in the Spanish national squad. The defender has excellent ball control and can even drive with the ball at his feet. Laporte is a great defender in open spaces and 1v1 scenarios and would be looking to demonstrate his defensive prowess when Spain and Switzerland encounter.