10 BEST MIDFIELDERS TO GRACE THE EUROS — WHO CLAIMS THE NUMBER ONE SPOT?

Europe has given the world’s most amazing midfielders since time immemorial and continues to do so as we approach the 16th edition of the Euros this summer. One of the biggest selling points of the competition has always been the eye-catching midfield battles and rivalries that keep fans on the edge of their seats. While at Euro 2020, we will see top midfielders like Luka Modric, Kevin De Bruyne, and Paul Pogba fight it out on the football pitch, we, at FootTheBall, will rank the greatest midfielders in Euro history.

While the role of a midfielder has been specified and divided into multiple positions in modern football, Nedved was one of those classic midfielders who can play anywhere on the pitch and never look out of place. The two-footed Czech international is widely considered one of the greatest midfielders of all time for his ability to attack, defend, cross, dribble and shoot while being all over the pitch.

The Czech Fury was an important part of the iconic 1996 Euro run when the Czech Republic finished runners up losing the final to a star-studded German side. Nedved gave a man of the match performance in the semi-final against Portugal playing a huge role in taking his team to the final.

Pavel Nedved won the Ballon d’Or in 2003 for winning the double with Juventus. 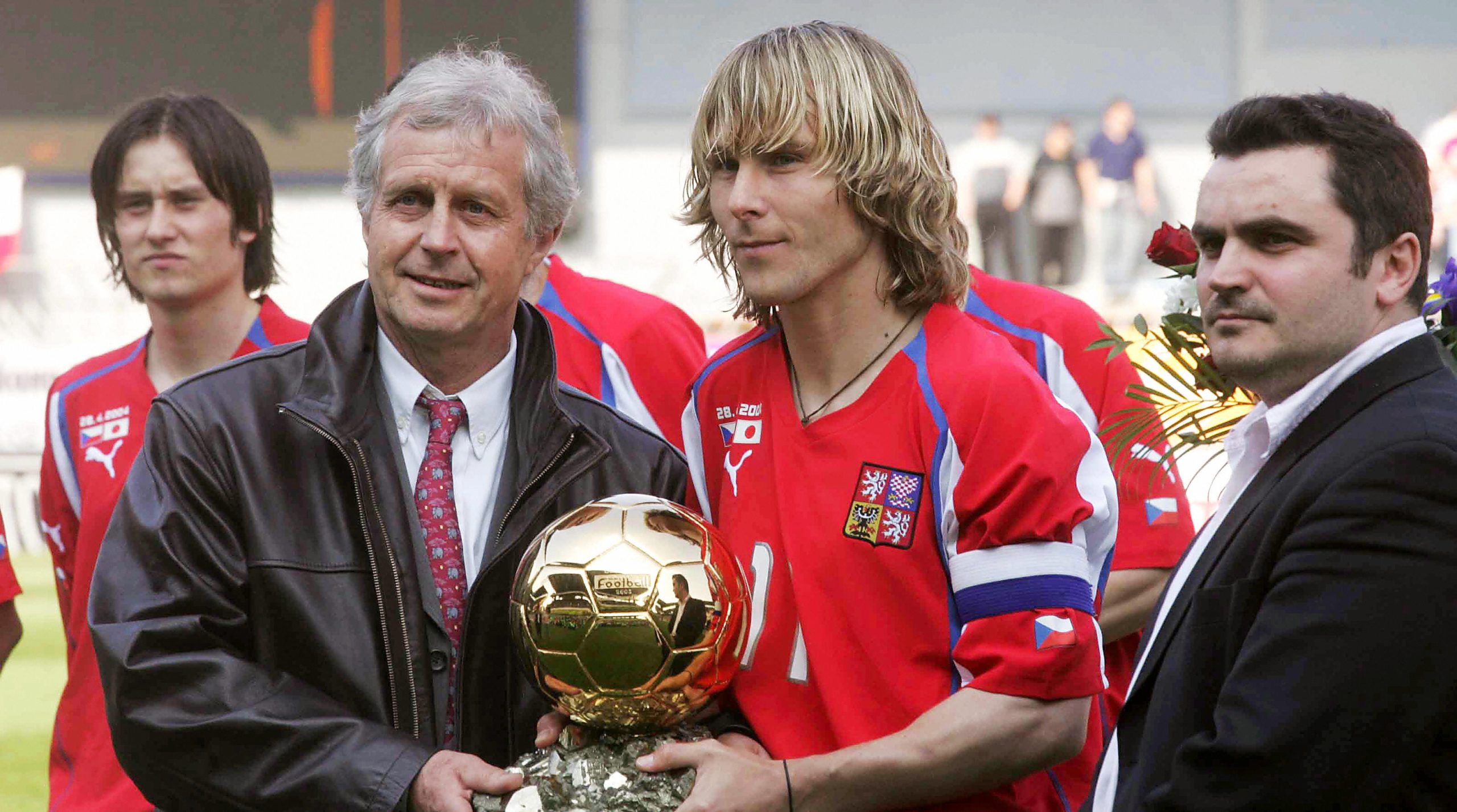 In Euro 2004, the top midfielder captained his national side and was tearing apart opponents being in the form of his life before an unfortunate knee injury forced Nedved out in the first half of the semi-final against Greece. The Czechs eventually lost the match in extra time to the eventual winners but Nedved was undoubtedly the star of the tournament and even featured in the team of the tournament.

Often overshadowed by elder brother Michael, Brian Laudrup was a character of his own. 6ft. tall, blonde hair and a majestic smile, Laudrup had a machismo to his personality which also showed on the football pitch. He is often regarded as one of the all-time greats but also someone who could never fulfil his potential. 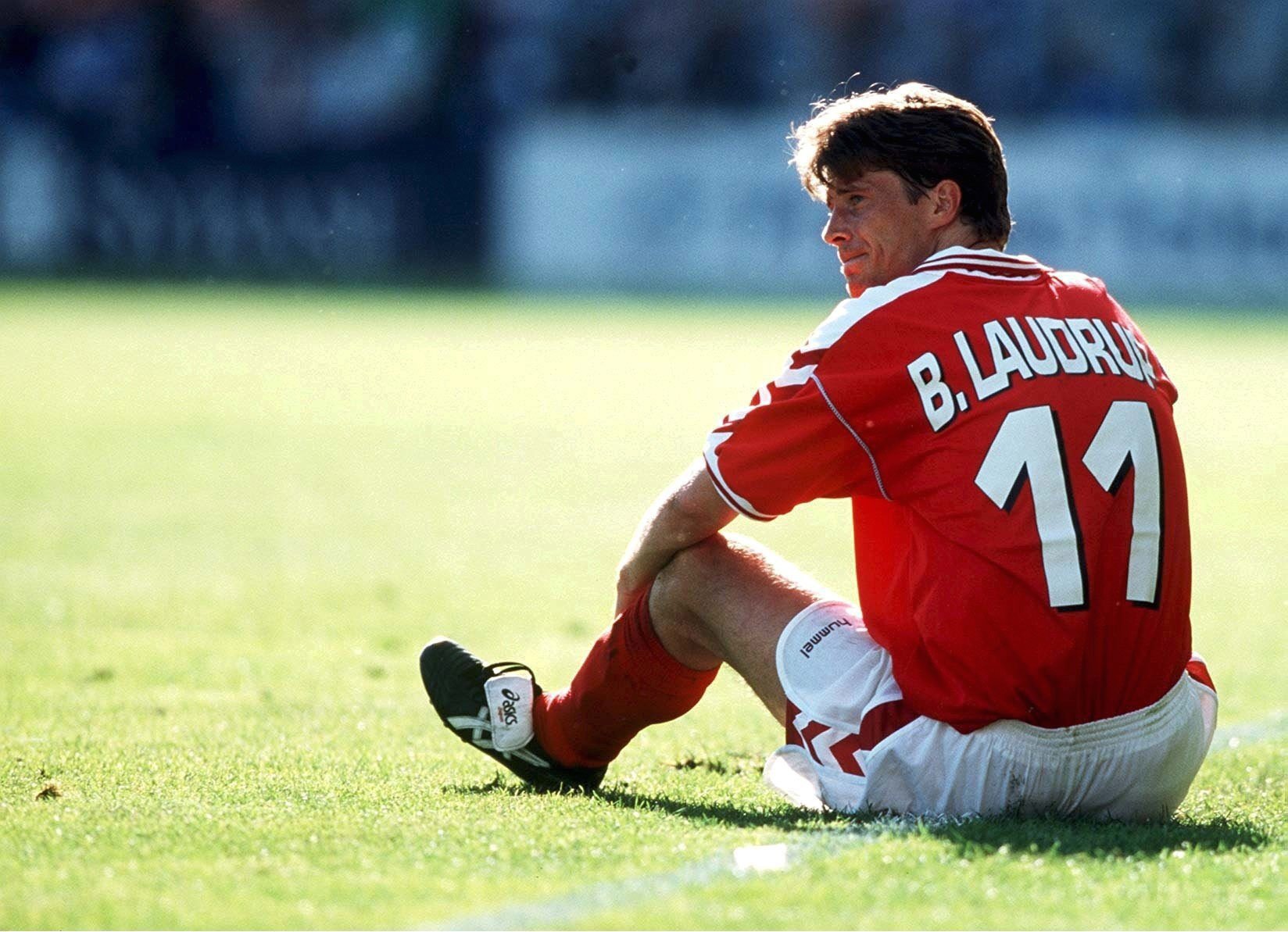 Danish fans remember him for the legendary 1992 Euro triumph which saw him become a national icon forever. It was one of the most remarkable underdog stories with Denmark getting called up a week before the tournament actually began following the disqualification of Yugoslavia. Denmark went on to defeat the defending European champions Netherlands and then world champions Germany in the semi-final and final of the tournament against all odds and Laudrup was at the heart of it. 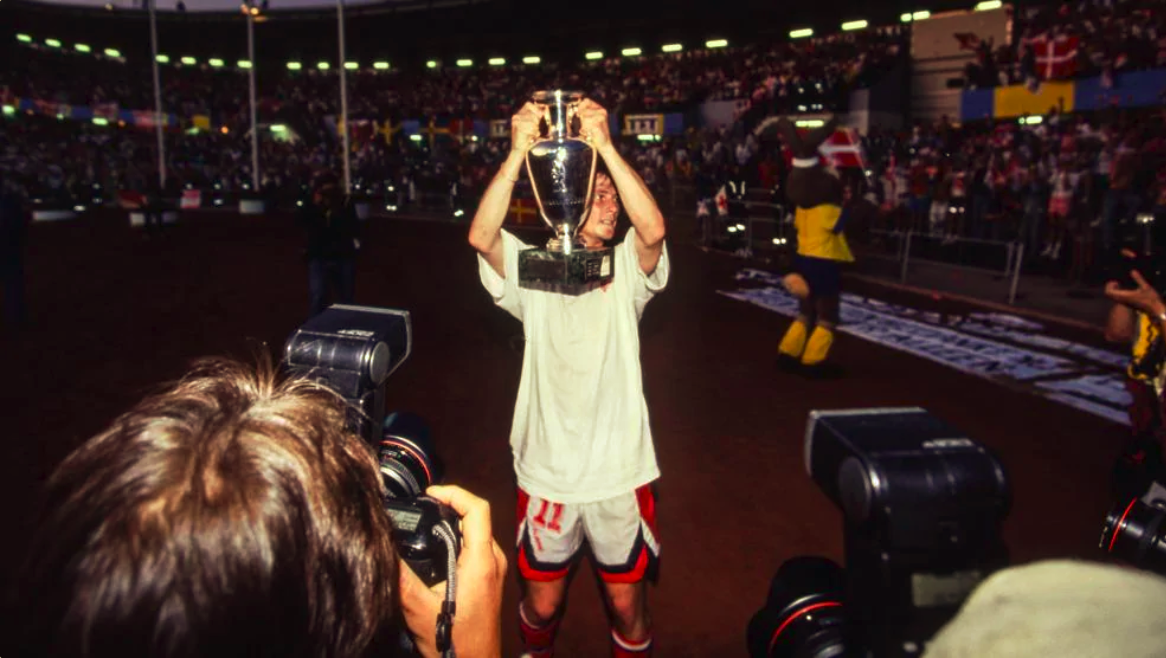 Despite being the champions, Brian Laudrup was the only outfield Danish player in the team of the tournament that year. In the following edition, Denmark went out in the group stages but Laudrup made his mark scoring three goals in as many matches.

The Scandinavian icon played a more advanced role at the 1998 World Cup and was a part of the team of the tournament alongside his brother Michael despite being knocked out in the quarter-finals.

One of the three Dutch players to win the Ballon d’Or, Ruud Gullit was a beast on the football field. He was tall, physically dominant with speed and athleticism and was the perfect product of Johan Cruyff’s total football. Mostly deployed as an attacking midfielder, Gullit could dominate the game from any position with his skills and strength. Being the captain, Gullit was a key figure in Netherland’s 1988 Euro success and even scored the opening goal in the final. The top midfielder had already won the Ballon d’Or a year prior and finished second that year on an all-Dutch podium behind Marco Van Basten and ahead of Frank Rijkaard.

One of the youngest European and World Cup champion with Germany, Bonhof made many crucial contributions in his international career. He assisted Gerd Muller’s world cup winning goal in 1974 against long-time footballing rivals the Netherlands.

He made 4 goal contributions in the semi-final and final of the 1976 Euro campaign which Germany entered as favourites but lost unfortunately on penalties. Bonhof scored the first penalty kick for his side but a miss later by Ulrich Hoeneß gave Czechoslovakia’s Antonin Panenka the opportunity to score the winner, which he did by chipping the ball into the back of the net, embarrassing the diving Sepp Maier. 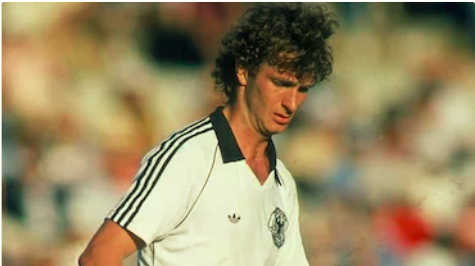 Bonhof played an important role in Germany’s qualification in the 1980 Euros but multiple injuries didn’t allow him to participate in the winning cup run.

Nevertheless, he became the only player to win the Euros twice before Spain’s golden generations won it back to back, adding 12 more players to the list.

Germany has never been deprived of complete super-star midfielders and Paul Breitner was no exception. Starting his career as a left-back, Breitner went on to score in two World Cup finals, becoming only the third player to do so.

Breitner was a powerful player, he could tackle as well as shoot with immense power which made him a fearsome figure on the pitch. Often remembered for expressing his political opinions including that of wishing America’s defeat in Vietnam, Breitner is one of the greatest footballer ever. 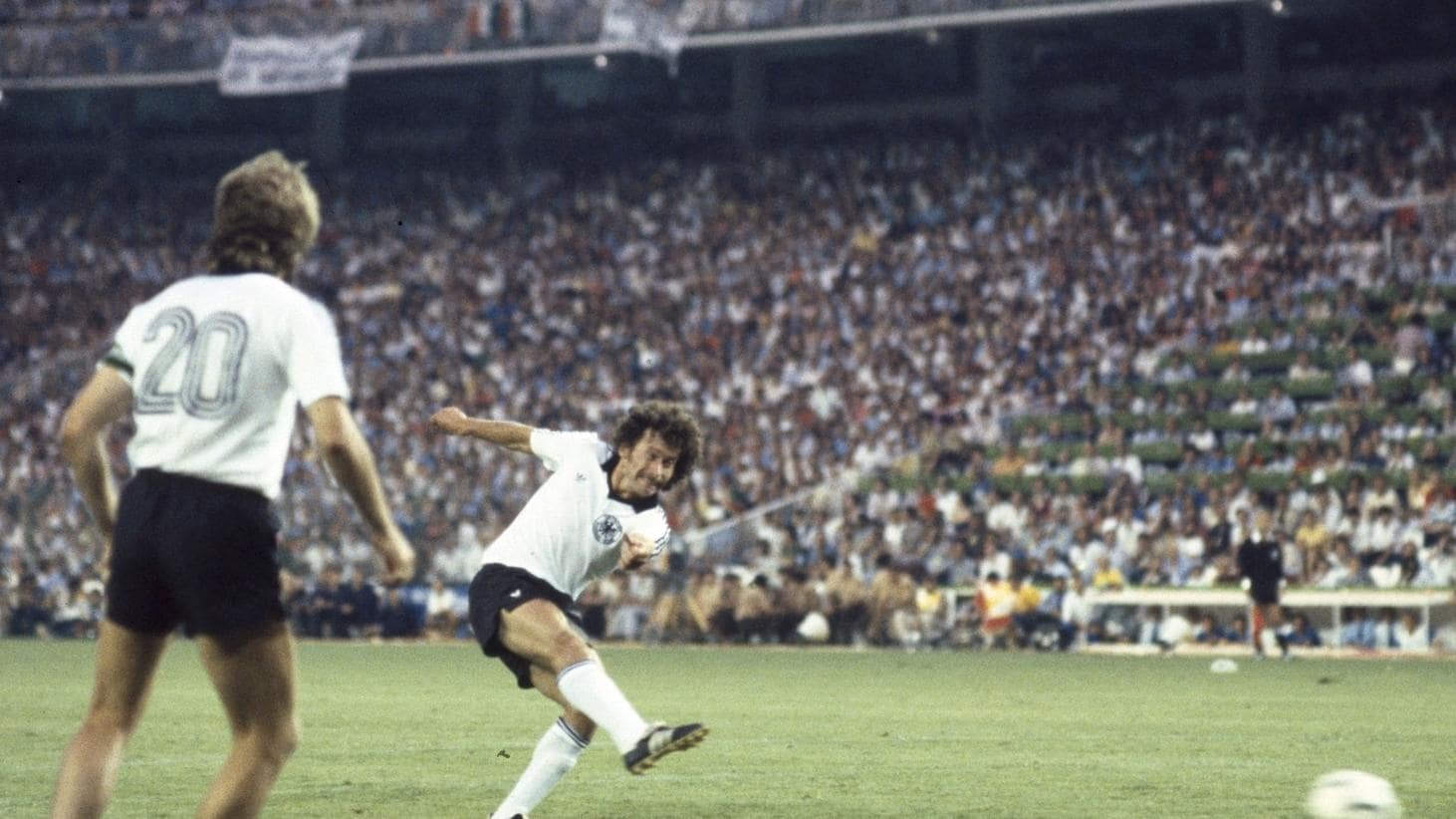 He won the Euro 1972 at the young age of 21 that featured in the team of the tournament and went on to become a German legend that won the famous 1974 World Cup at home.

Spain’s golden generation that stamped its name in the history of football winning two Euro and a World Cup in a span of four years was built around two top Barcelona midfielders who had perfected the art of tiki-taka passed their way through the opponents’ defences. Xavi was often regarded as the engine of the team with his inept passing and unmatched stamina. He outclassed his opponents with elegance and precision while keeping his side glued together. 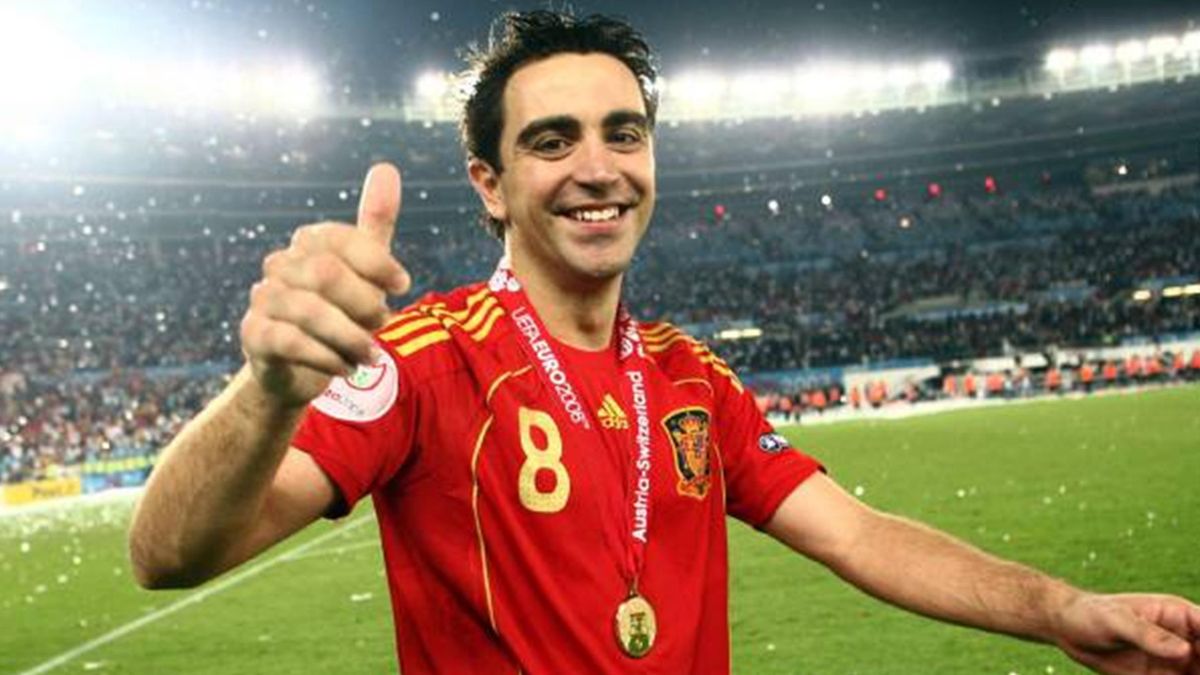 Spain won the 2008 Euro with Xavi being the player of the tournament, what followed was unprecedented domination as Spain won the 2010 World Cup and 2012 Euros as well. 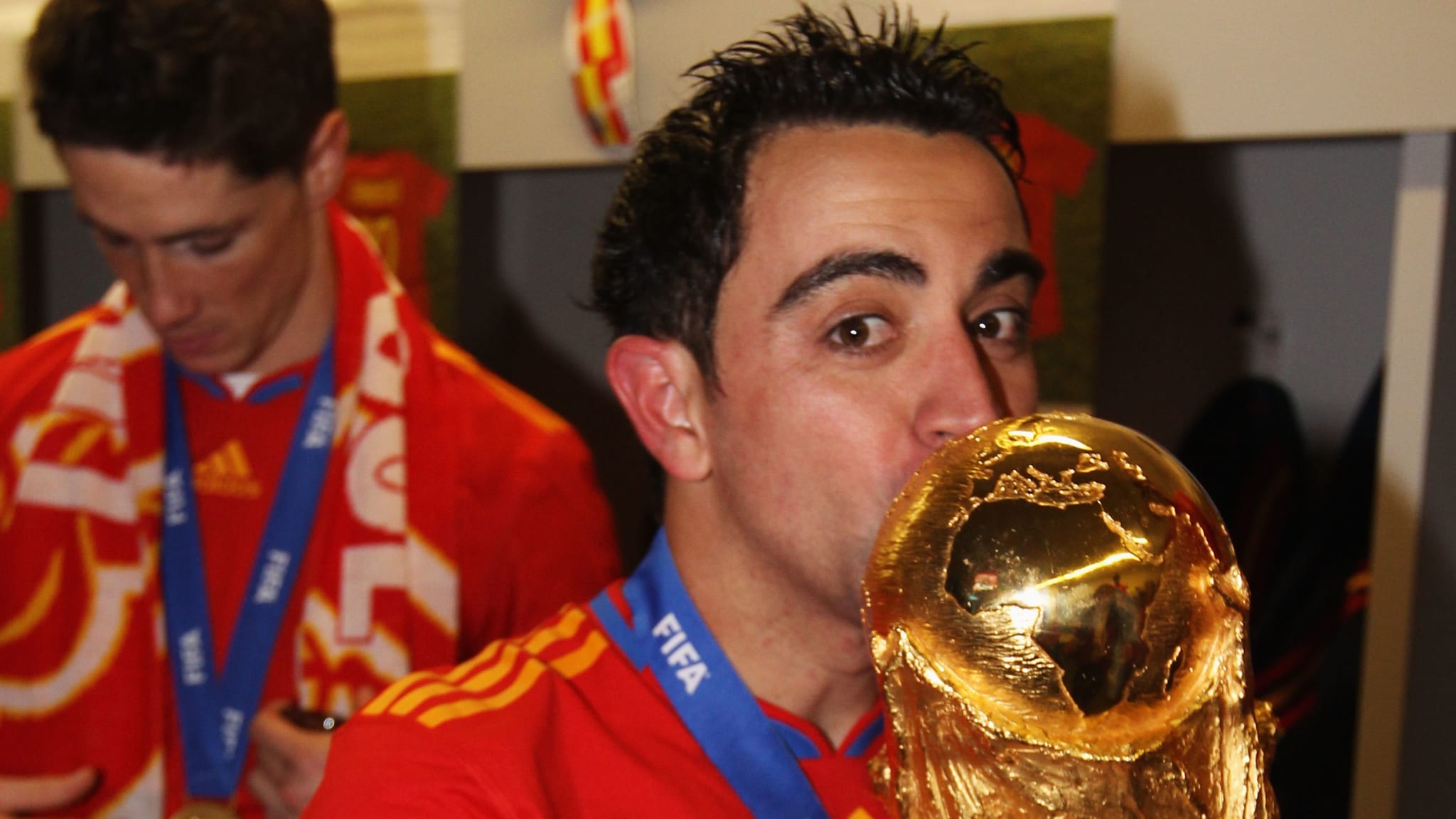 In a generation of Lionel Messi and Cristiano Ronaldo, Xavi became an inspiration for many aspiring midfielders who would dream about being as perfect as Spain’s legendary number 8.

“Zizou” as he is affectionately called by his fans, is one of the greatest footballers of all time, an icon who inspired a generation of midfielders including the likes of Mesut Ozil and Paul Pogba.

Zidane was truly one of the top attacking midfielders of the Euro championship, known for his graceful first touch, powerful shot striking, unmatched vision and elegant passing ability. 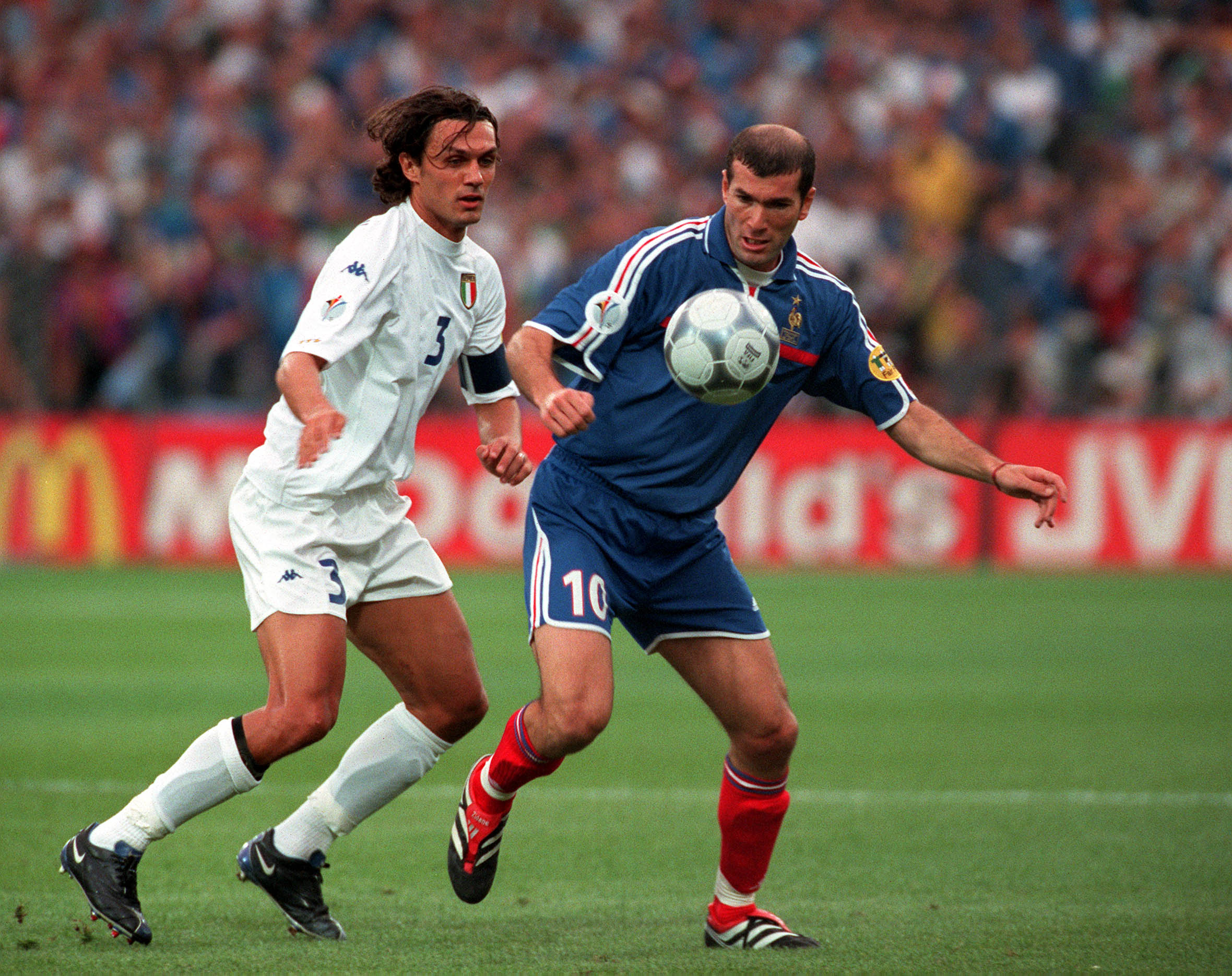 The Frenchman won his side back to back international trophies — the World Cup 1998 and the Euro 2000. He scored two goals in the 1998 world cup final and won the Ballon d’Or that year while two important goals in the knockout stages of the Euro 2000 saw him get the player of the tournament award.

Next up in our list of Euro top midfielders is an all-time great, a France legend who later went on to become the president of UEFA, Platini had a career to cherish for years to come.

The 3-time Ballon d’Or winner was widely considered the greatest attacking midfielder of his time. His versatility, elegance and footballing IQ made him outplay his opponents despite lacking physicality. A free-kick maestro of his time who could dribble, create and score a lot of goals, Platini is a legend of the game in the true sense. He single-handedly carried France to the Euro 1984 glory, scoring nine goals alone out of the 14 goals France scored on their way to win the trophy, including a last-minute winner in the extra-time of the semi-final against Portugal. 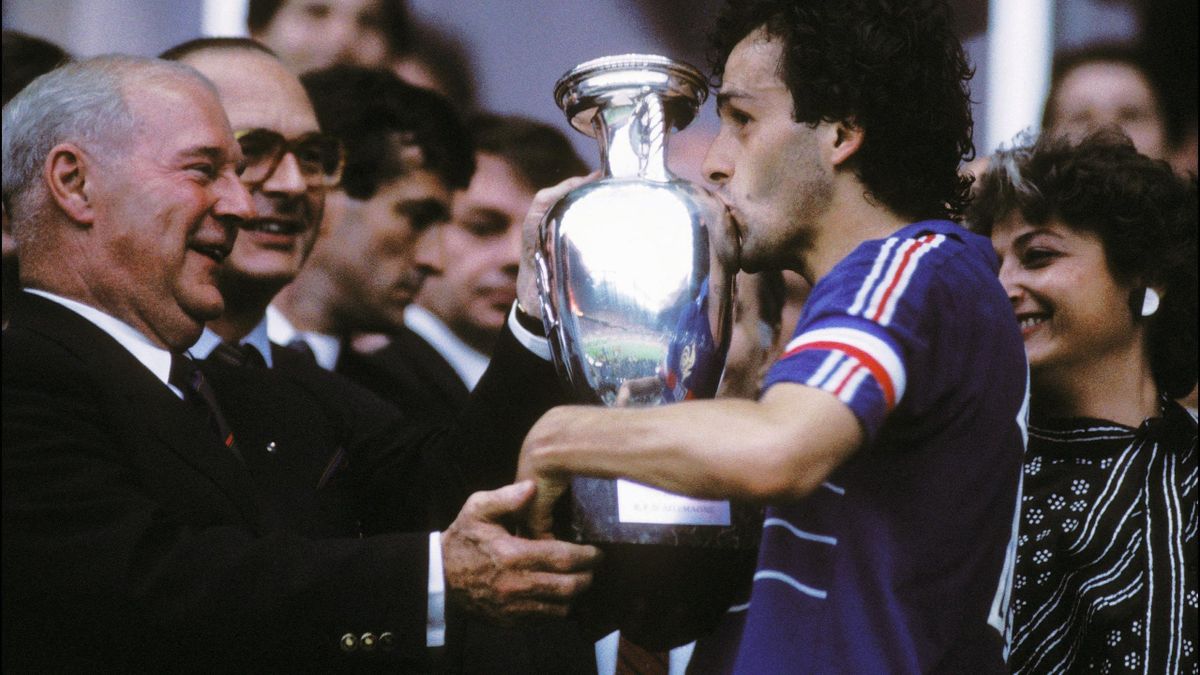 As expected, Platini opened the scoring in the final against Spain as France secured a comfortable win and won their first international trophy at home. His performance at the Euro 1984 is considered one of the best individual performances at an international competition ever.

Matthaus won his first international trophy at the age of 19 as West Germany triumphed in the 1980 Euros. While he watches his side get past teams from the sidelines, he was brewing to become one of the greatest footballers to ever step out on a football pitch.

A career that spanned long enough for him to be named alongside the likes of Johan Cruyff and George Best as well as Thierry Henry and Zinedine Zidane by the time he retired. 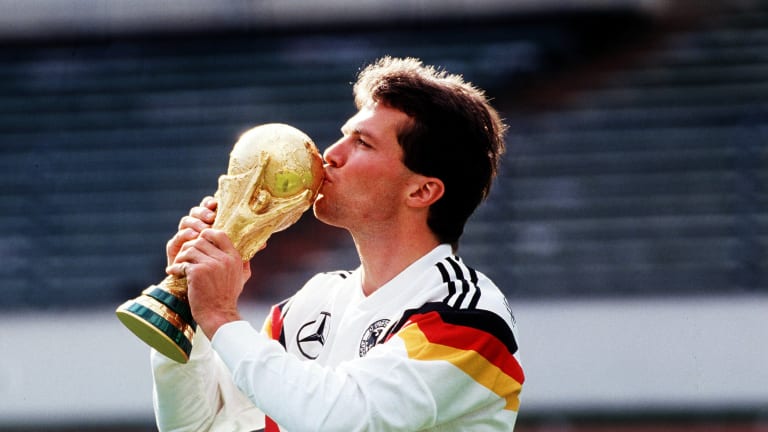 He captained his team to a World Cup glory, ten years after the Euro success, scoring 4 goals in the tournament. He was named in the tournaments best XI alongside legends like Diego Maradona and Paul Gascoigne.

He went on to win the Ballon d’Or that year, becoming only the 4th German to win the prestigious honour. A true legend for his nation, he also holds the record for most appearances (150) for Germany.

In the historic three consecutive International tournament wins by Spain, Andres Iniesta played the most important role as he won five man of the match awards across the three competitions. 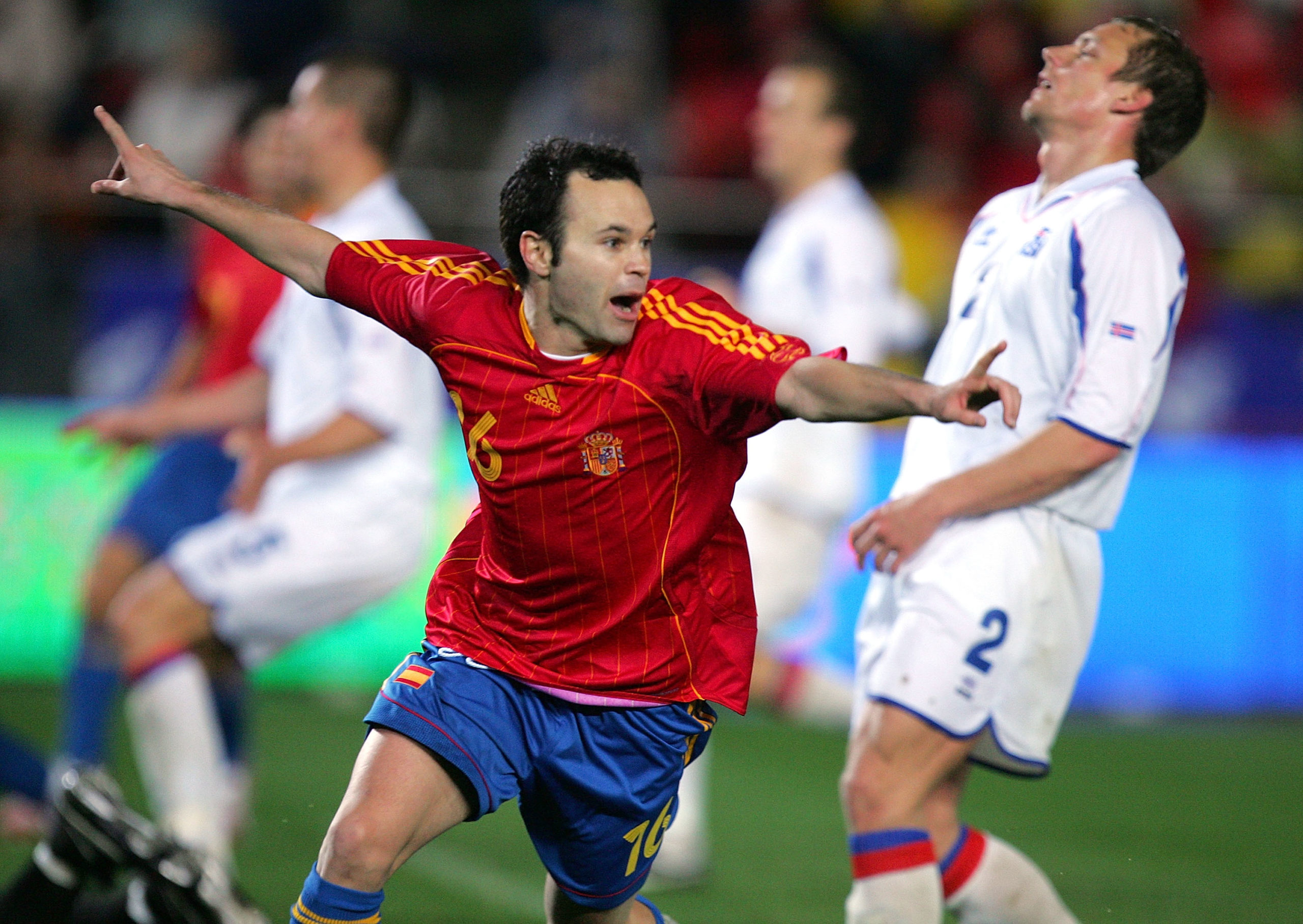 Starting his career as a defensive midfielder, Iniesta grew into a more advanced role, finding a rhythm with his Barcelona teammate Xavi as they went on to become the most iconic midfield duo of all time. They were creating magic on the pitch for both club and country winning countless trophies on course.

Don Andres, as he was later called by the fans, was known for his perfectionist behaviour. The Euro legend mastered the technical aspect of the game and is considered one of the very few top midfielders who can both create and score world-class goals while working like an engine on the pitch.

He scored the winning goal in 2010 against the Netherlands, as Spain won its first-ever World Cup. 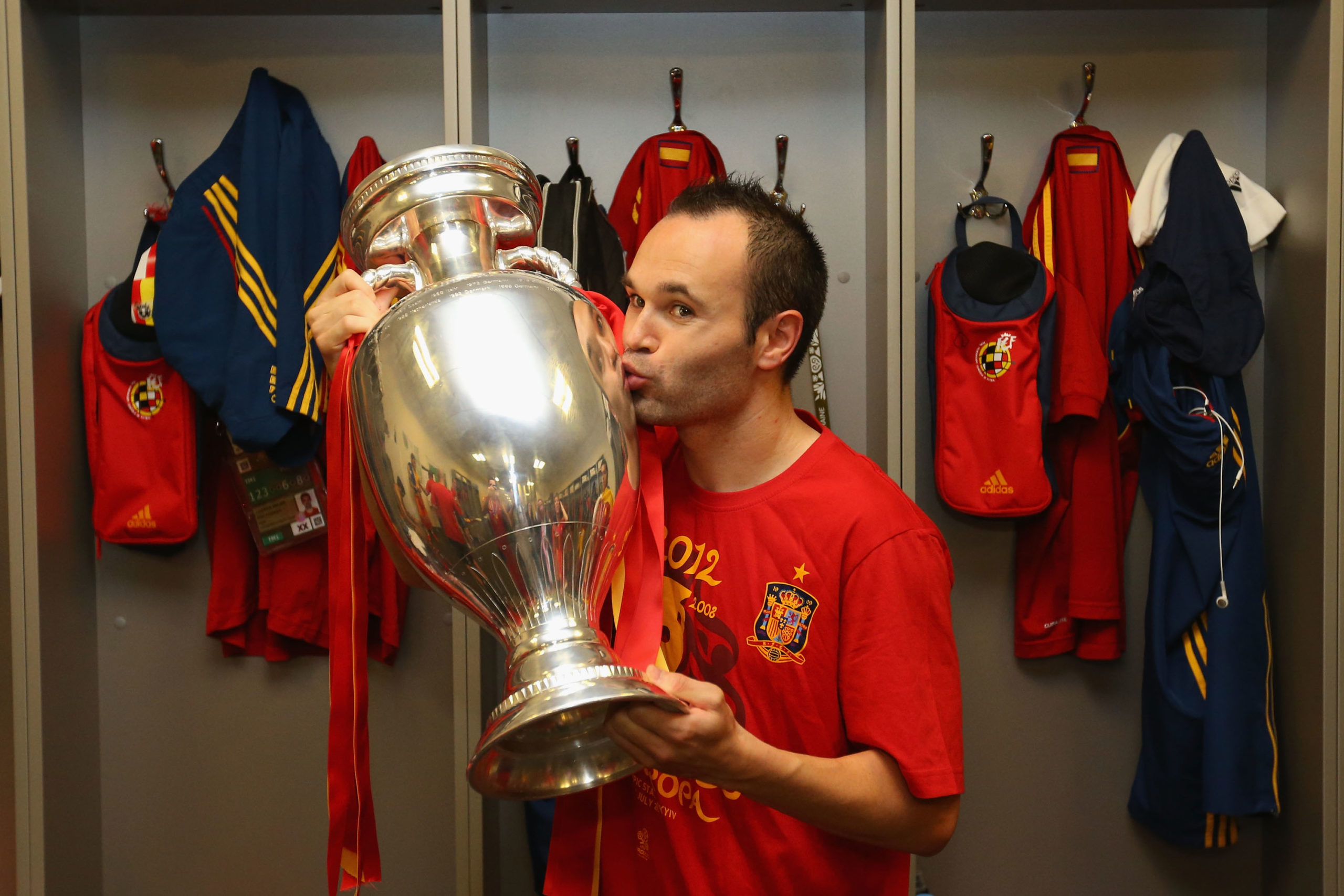 In 2012, Spain successfully defended the Euros, becoming the first-ever team to do so. Iniesta won three man of the match awards in the successful campaign, including that in the final and was named the player of the tournament as well.