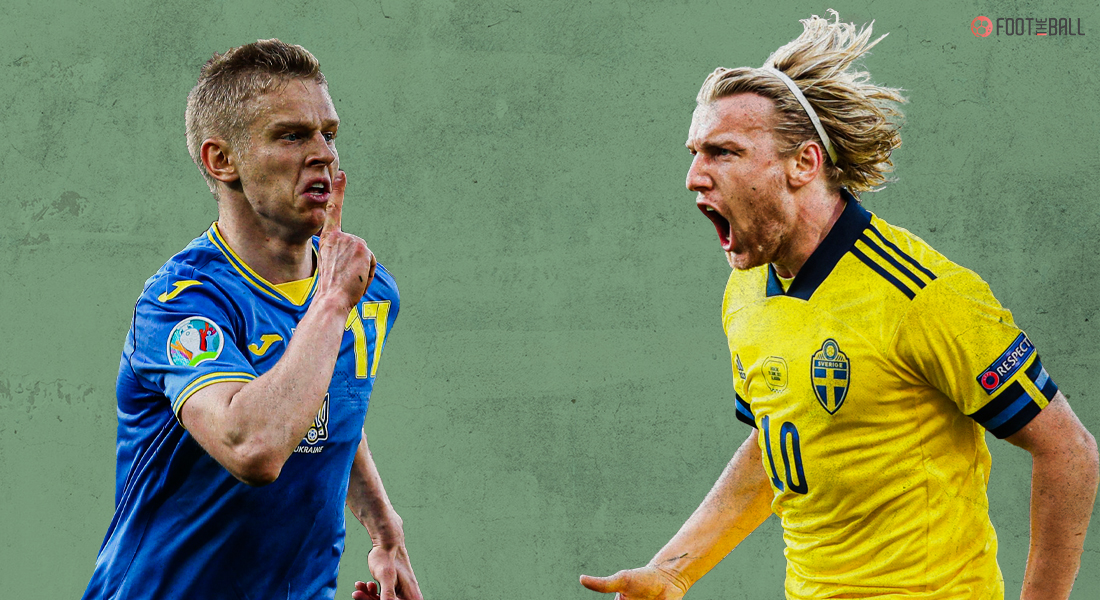 EURO 2020: 5 THINGS WE LEARNED FROM UKRAINE'S VICTORY AGAINST SWEDEN IN THE LAST ROUND-OF 16 FIXTURE

While the roars and tremors of ‘It’s Coming Home’ surrounded the football fraternity, Ukraine and Sweden locked horns in Scotland to conclude a jaw-dropping round-of-16 fixture. With the Three Lions catapulting Die Mannschaft’s Euro journey, the winner of Sweden and Ukraine was destined to cross swords with Southgate’s lions.

A galaxy of opportunities the game should have ended before the referee’s final whistle but a stalemate after the two halves resulted in extra-time with Ukraine bashing Sweden’s silverware cravings with a goal in the dying seconds of the second-half of extra-time.

🇺🇦 How to score your first goal for Ukraine, by Artem Dovbyk! ⚽️

We at FootTheBall look at 5 things we can note down from the battle of underdogs in Scotland.

Finding a story for the current generation to laugh about 10 years down the line is rare. Although this summer of football has easily presented us with chronicles that could be discussed on the Christmas dinner tables. Be it Eriksen’s unbelievable revival from jaws of death or Modric’s rocketing volley to guide Croatia to the knockouts, Euro 2020 has exceeded its expectations. The summer carnival also witnessed a handful of teams rising from their ashes to defeat their rival numbers.

🇨🇭 Granit Xhaka: “To come back like this, to show this spirit, to show this character, I'm very proud to be part of this team."@nati_sfv_asf | #EURO2020 pic.twitter.com/ii9P4DaGeQ

Switzerland’s dramatic victory against the World Champions or Denmark’s demolition of Wales, the Euros have discovered newer teams to be categorised under ‘Dark Horses.’ After the predicted underdogs, Turkey failed to reach its potential, the world thought that the humongous sharks would eat these goldfishes alive. Although with Denmark, Switzerland, the Czech Republic, and Ukraine confirming a quarter-final berth, half of the population in the Euros knockout stages consist of what football calls ‘Underdogs’.

When your talismanic striker decides to leave the national team at the eleventh hour, the tension in the roster is bound to increase. The expectations and dreams of the country change as ‘Surviving in the tournament’ conquers the ideology of ‘Lifting Silverware’. Zlatan Ibrahimovic’s absence from Sweden’s final squad opened the doors for a youngster to either fill his golden boots or for the Swedes to bow out without fabricating a fight. And in the European brawl till now Emil Forsberg has carried a billion dreams on his inexperienced but electrifying shoulders.

With a vicious spot-kick against Slovakia and a brace against a strong Polish outfit, Forsberg’s exciting talent is a feast to the eyes. Conquering the middle of the park, engineering mouth-watering moves, and constantly galloping towards the goal, Forsbergs a machine developed to dig Sweden out of adversity and net some thunderous strikes when required. Today’s magnificent equaliser against Ukraine perfectly describes how the RB Leipzig forward can unlock a defence and break the deadlock with a snap of his fingers. The Sweden international weaved his magic on the pitch rattling the Ukraine post twice or thrice in the second half.

A hard-fought 90 minutes, Scotland’s Hampden Park experienced a battle for the ages. Ukrainian captain and leader, Zinchenko gave his team a pivotal advantage in the 27th minute of the game. But Emil Forsberg’s deflected attempt had rejuvenated Sweden’s aspirations just before the break. But what the two managers injected in their players, the two outfits arrived hungry for goals. Forsberg constantly sneaked behind Ukraine’s back-line smashing the woodwork twice or thrice while the commentators screamed Andriy Yarmolenko’s name every five minutes.

The troops were presented with enough chances to find the back of the net but the lack of patience and quality in the final third cost them, two teams, a fortune. Tired legs and minds, the lack of creativity and flair seemed quite evident. The tempo never took a u-turn with the teams constantly bothering the opposition’s backline but a goal eluded them. ‘The Blagult’ belted 13 shots throughout the game while ‘The Team’ thundered 15 rockets but the scoreline never bartered itself in the battle between Sweden and Ukraine. If these many chances would have been presented to Ibrahimovic that too on a platter, he would have demolished Ukraine’s dreams in the first half itself. The missed opportunities haunted the Swedes as an extra-time red-card, the problem of chasing Ukraine’s shadows due to tiredness, and a last-second Dovbyk finished their dreams of making it to Rome.

4. THE LACK OF EXPERIENCE STEPS-IN

Sweden’s manager, Janne Andersson introduced three attacking changes as the fixture lacked a necessary pinch of flamboyance. With weary legs battling it out in the centre, a moment of foolishness is what the managers wanted to avoid. Andriy Shevchenko’s Ukrainian army understood their manager’s orders but Andersson’s battalion picked only a few words from his speech. The extra-time are nervy moments where you think of both waiting for penalties and carrying the game to penalties. Sweden’s inexperience was exposed just 10 minutes into the first session of extra-time.

Marcus Danielson is shown a red card for a horror challenge🔴

A bizarre challenge if not reckless by Dalian Professional centre-back Marcus Danielson could have easily shown the Swedes the exit door. The referee initially pulled a yellow card out of his pocket but after VAR’s advice, the official changed the card’s colour to red. With the two teams creating tons of attacks, the role of a defender increases in the dying minutes, something Danielson should be well aware of. Unfortunately, he was given the marching orders leaving Sweden stranded against a full-fledged Ukraine side.

5. THE EXTRA MAN COMES IN HANDY AS THE FAIRYTALE CONTINUES

When the referee blew his final whistle, the satisfaction on the faces of Zinchenko, Dovbyk, and Shevchenko elaborated a story. Passing on the baton but still blessing them with his managerial abilities Shevchenko’s contribution to his country is unbelievable. The outfit in Blue was bashed by pundits during the second half for slowing the momentum of the game to carry the game to penalties. Although Shevchenko’s strategy got exposed he still ensured that Ukraine’s footballing commanders never looked tired on the pitch and they didn’t commit an atrocious mistake on the pitch.

Sweden’s red card in the 99th minute gave Ukraine the perfect opportunity to utilise the one-man advantage for 20 minutes against a wrecked Swedish army. Ukraine recycled possession dictated the centre of the pitch and bashed a few strikes. But unfortunately, the majority of them failed to trouble Robin Olsen, the Swedish shot-stopper. Already limping with the red card, Sweden looked to crawl their way into penalties with just seconds left on the clock but Ukraine and Dovbyk had other ideas.

Zinchenko’s inch-perfect delivery invited Dovbyk to pounce on it and the striker’s thundering effort at goal screamed ‘lethal’ while bulging inside Sweden’s goal. The jerseys were off but the smiles were on as Ukraine earned a fairytale entry into the quarter-finals. An English challenge awaits them at Rome, but at this moment Shevchenko’s stallions can celebrate a momentous victory.