Denmark thrashed a blunt Wales side in their Round of 16 fixture of Euro 2020 in a 4-0 win. Tactical chaos in the backline and a blunt attacking performance cost the Welsh team a shot at the title.

Wales came onto the pitch after an inconsistent Group Stage as they lost their final matchday against an immature Italian side and only finished 2nd in the group on goal difference. Denmark on the other hand finished their Euro 2020 Group Stage with a bang as they crushed Russia after two unlucky defeats in the tournament.

The Danish side looked a bit stronger on paper but still, Wales shouldn’t have been defeated in such a manner. FootTheBall brings you 5 things we learned from Wales vs Denmark in the Round of 16 of Euro 2020.

Denmark played the beautiful game the way it is supposed to be played. Their main asset was their passing and attacking IQ. They maintained their defensive shape really well and built their whole game on it. Sustaining the quick counters by the Welshmen and started their link-up play from the start. Their passing was top tier and the forwards got into some mouth-watering positions to poach the ball. 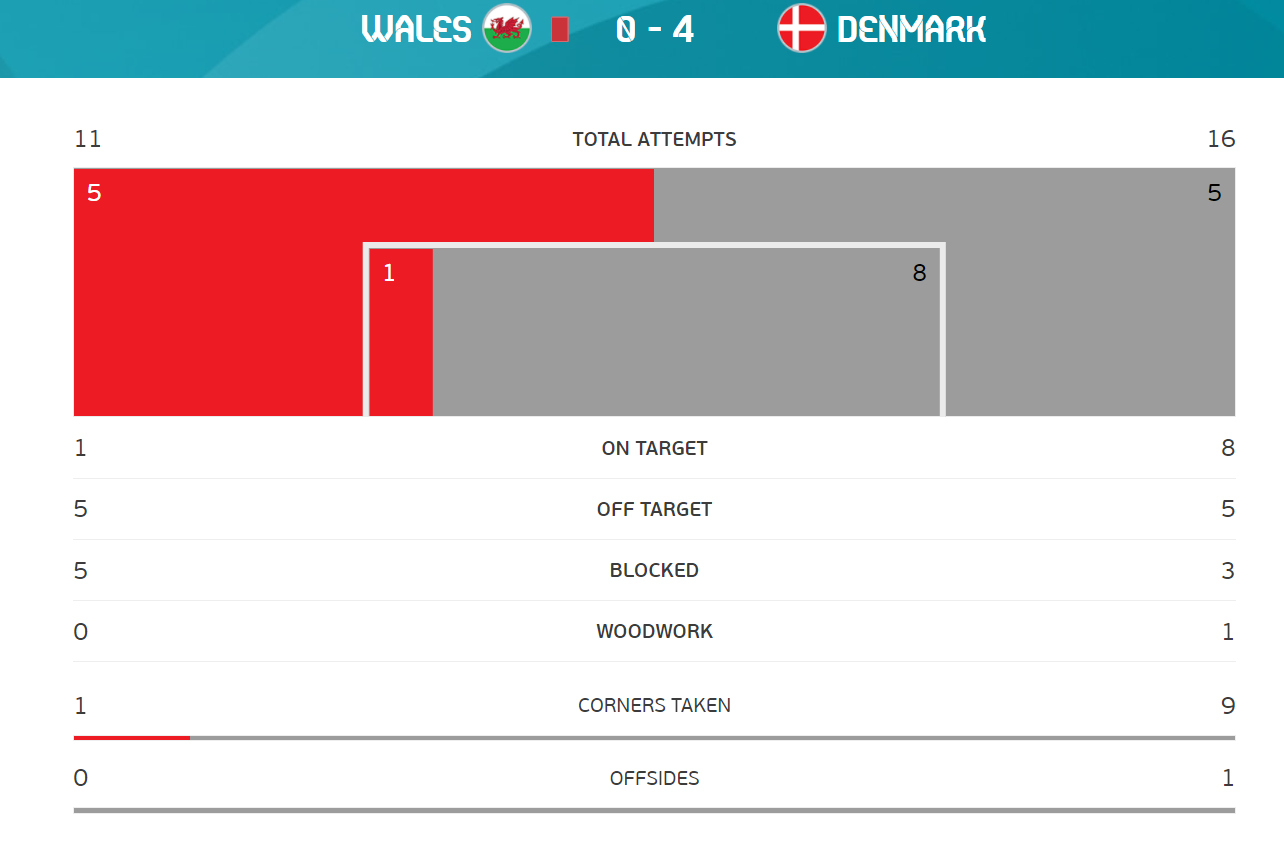 The midfielders kept the ball looking for an opening and as soon as Wales made a mistake, the Danes made sure their opponents paid for it. One thing in particular that stood out for Wales was how effectively their forwards used the half spaces to push themselves ahead. Denmark stuck with the basics and finished the job.

2) WALES WERE TOO PHYSICAL

Welsh defenders didn’t time a single tackle properly in the whole game. Joe Rodon made a nasty tackle in the first few minutes but got away with it, but the referee couldn’t give him too much leeway as he got his yellow card in the 26th minute. Keifer Moore also received a yellow card in the dying minutes of the first half.

Once a player gets booked early on, a much more cautious mindset kicks in. Booked players walk on a tight rope uncertain when they will be sent off. You don’t want that kind of baggage hanging on your back at a tournament like this. 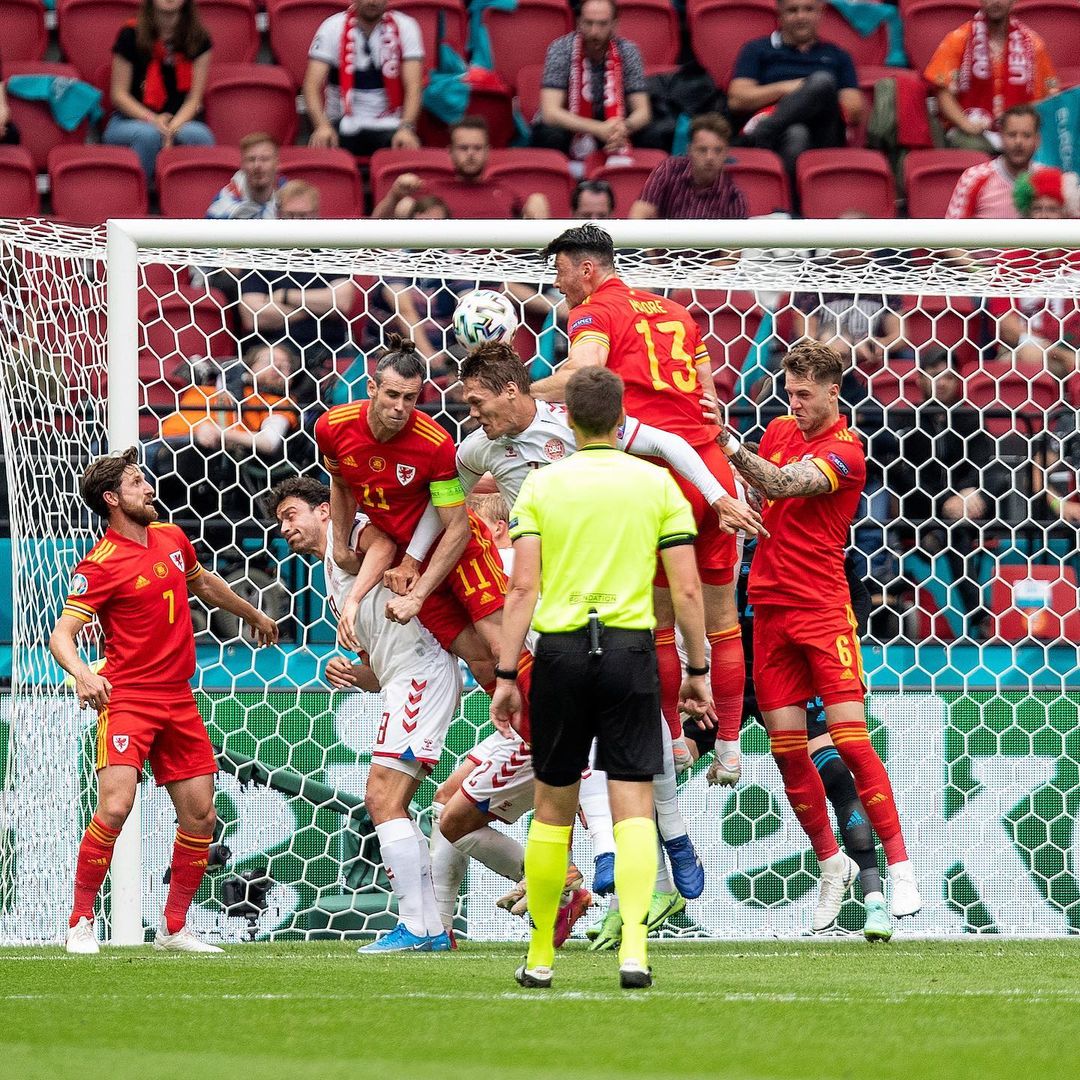 Wales got 4 yellow cards and a red card in total. Although the red card and one of the yellow cards came late in the game, the rest of the booking surely affected the team’s overall performance. The players should have been more careful in their challenges in the first half.

3) WALES CONFUSED ALL ROUND

Defensively it had been the horrendous 90 minutes for Wales. All four goals, that Wales conceded were because of their own silly mistakes at the back. Their passing at the back was really poor since they gave away the ball to the opposition one too many times.

Nobody took the responsibility upon themselves to lead the press when they were trailing in the second half. In the final third, although they created some decent chances, there was no one in the box confident enough to put the ball in the net. At times they progressed forward with pace on the flanks, only to find nobody in the box to pass to.

Denmark will play the winners of the game between the Netherlands and the Czech Republic in the Quarter Final and would be surely confident heading onto the game after a solid win tonight against Wales. Both the Dutch and the Czech are formidable opponents that might cause trouble for the Danes, but if they play like they do today, Denmark would be cruising ahead. They looked sharp, confident and determined ever since the referee blew the kick-off whistle.

Denmark would bring this momentum against strong opponents ahead in the tournament and this exciting side is actually looking like they can go all the way in Euros.

5) THINGS WENT DOWNHILL FOR WALES IN  SECOND HALF

To be honest, Wales started off well in the first half. They made a few good attempts on goal as Gareth Bale came teasingly close to netting the ball. Things started to look shaky after they conceded their first goal courtesy of Kasper Dolberg in the 27th minute.

In the second half, they were busy chasing the ball as Denmark looked confident with every stride. No one in Wales took the responsibility to get the possession and attack. They were just sitting inside the box fending off Danes when they should have been building up play and creating chances. Their sloppy defending and blunt attacking never looked like a team playing in the Round of 16 of Euro 2020 and hence they conceded 3 avoidable goals in the second half.