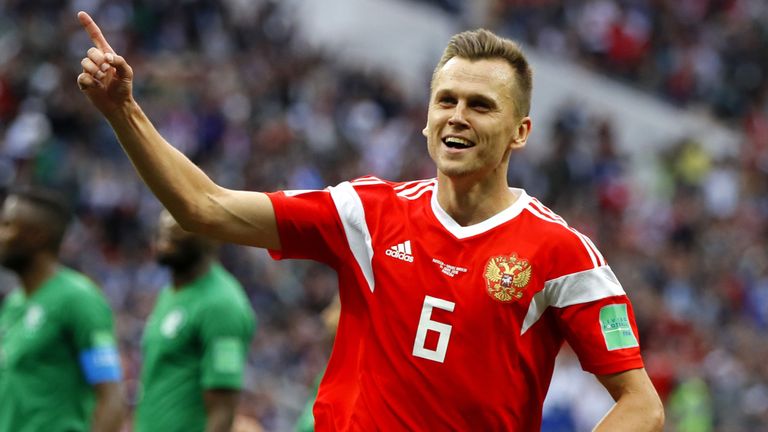 Substitute Denis Cheryshev scored twice as Russia opened their World Cup campaign by romping to a 5-0 victory over Saudi Arabia here on Thursday.

Cheryshev scored either side of halftime while Artem Dzyuba, Iuri Gazinksy and Aleksandr Golovin were also on target in front of 78,000 fans at the Luzhniki Stadium.

The result marked Russia’s first victory in football’s showpiece event since a 2-0 win over Tunisia in Japan 16 years ago.

It took just 12 minutes for the hosts to open the scoring as Golovin’s lofted cross found an unmarked Gazinsky, who headed past Abdullah Almuaiouf.

Fedor Smolov almost doubled Russia’s lead shortly after when his scuffed shot forced a finger-tip save from Almuaiouf.

Russia suffered a blow in the 24th minute when midfielder Alan Dzagoev was forced off after a heavy knock and replaced by Cheryshev.

The hosts continued to dominate possession and on the few occasions that Saudi Arabia advanced beyond the halfway line they were quickly closed down.

Cheryshev, who was causing trouble for right-back Mohammed Alburayk, made it 2-0 on the stroke of halftime. The Villarreal winger ran onto a pass from Roman Zobnin before showing fancy footwork and thumping a shot past the Saudi goalkeeper.

Russia continued to press early in the second half but, after Alexander Samedov fired over from distance, Saudi Arabia enjoyed a rare period of possession and two half-chances to score.

First, a lunging Taiseer Aljassam just failed to connect with Mohammed Alsahlawi’s cross and then Salman Alfaraj headed over from a set piece.

But Saudi Arabia’s resurgence proved fleeting. Russia retook the initiative and went close to scoring again when Almuaiouf fumbled a tame shot from Zobnin before the ball was cleared away.

Zobnin was involved once more as Russia made it 3-0. After a combination of short passes on the right, the Spartak Moscow midfielder delivered a precise cross to Dzyuba, who headed in just moments after replacing Smolov.

But the best was yet to come as far as the hosts were concerned. Cheryshev provided the highlight of the match by showing sublime control before striking the ball with the outside of his left boot and sending it into the top right corner.

Golovin completed the rout in the last minute of injury time by curling a free kick around the Saudi Arabia wall.