THE TICKET TO THE SHOWDOWN 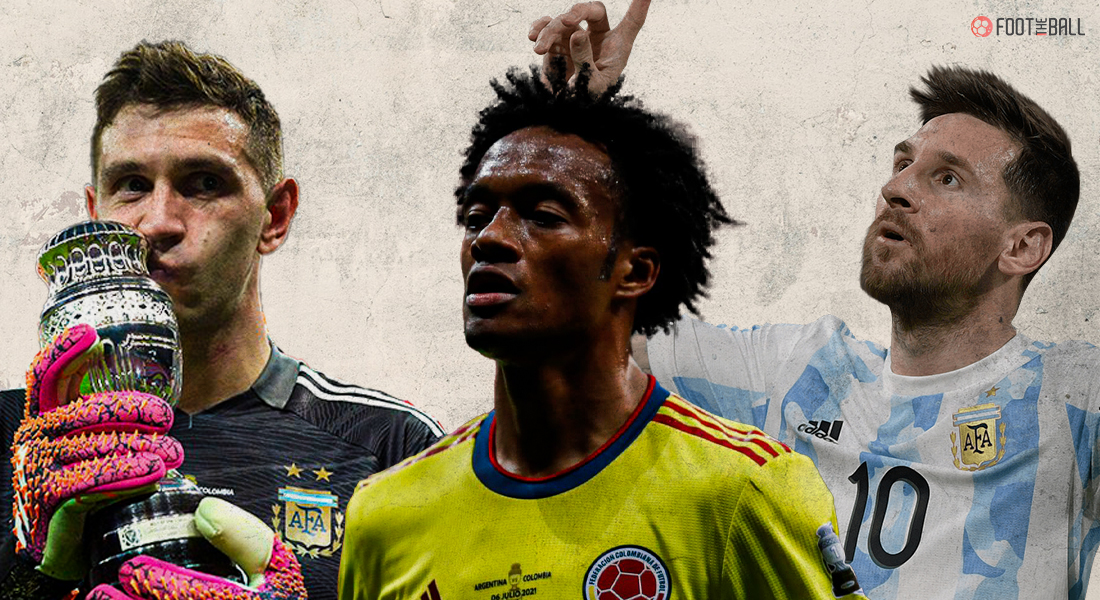 A mouth-watering semi-final in Brasil saw Lionel Messi’s Argentina cross swords with silverware hungary Colombia. Lautaro Martinez opened the scoring for La Albiceleste but Luis Diaz’s resilience and swiftness equalised the scoring as the two teams proceeded towards penalty after a stalemate in the second semi-finals of the Copa America.

Emiliano Martinez donned his superhero costume during the shoot-out as three extraordinary saves by the Aston Villa goalkeeper ended Argentina’s penalty struggles. La Albiceleste converted 3 out of the 4 penalties while their shot-stopper spectacularly saved 3 attempts from Los Cafeteros giving Argentina the ticket to the final.

We at FootTheBall dig deep to find out 5 things we learned from the encounter in Brazil and who was the star player in the game between Argentina and Colombia.

MARTINEZ’S EXCEPTIONAL FORM DURING THE BUSINESS END OF COPA  AMERICA

Lautaro Martinez opened the scoring for La Albiceleste with an early goal giving Scaloni’s army the advantage. Although Argentina marched into the semi-finals, Lionel Messi’s coruscating outings in Brazil have shrouded the fact that the other forwards have had some shambolic evenings. Scaloni’s initial choices Martinez and Gonzalez have smashed the balls into the advertising boards rather than the rivals’ goals. After enjoying a mouth-watering campaign in Italy, the world expected Martinez to be the perfect understudy for Messi.

The statistics might show a handful of goals under Martinez’s title, his questionable form in front of goal saw him being benched by Scaloni. Although two goals in the knockout stages will do Martinez’s confidence a world of good. A roller-coaster South American summer, Martinez was the man under the scanner when Argentina locked horns with Colombia. But a beautiful ball by none other than Messi into Martinez’s path who struck deliciously to find the bottom corner wrong-footing veteran David Ospina.

Although Lionel Scaloni has been on a 16-game winning streak, the South American pundits have questioned the green horse’s park-the-bus strategy. Manchester United fans would be familiar with this managerial tactic, with Jose Mourinho reducing Old Trafford’s attacking flamboyance. Argentina has been fortunate with a few sneaky 1-0 victories coming against Peru and Uruguay. When La Albiceleste earned the advantage in the 7th minute, they looked to sit back and invite pressure, a tactic rarely seen in the first half.

With swashbuckling attacking talent present at Scaloni’s disposal, the Argentines have forgotten the phrase ‘Going all guns blazing. Colombia’s constant oppression gave Pezzella and Otamendi nightmares with the two centre-backs not being able to survive Los Cafeteros’ attackers. Although the first-half scoreline favoured Argentina, Colombia did rattle their oppositions’ frame twice in a matter of seconds. The men in yellow smashed 7 shots but managed just one shot on target and their bluntness in front of Emiliano Martinez’s frame cost them an equaliser.

The 2021 South American jamboree of football has already delivered the spectators a few unimaginable moments. Lionel Messi’s free-kick to send Argentina to the semi-finals or Neymar’s exploits against a diligent Peruvian outfit, Copa America’s journey has been exceptional. Unfortunately, one thing that has been shocking in Brazil is the high-intensity games being played. With matches being converted into battlefields literally, teams are taking the ‘Do-Or-Die’ slogan quite seriously. The referee’s whistle has conquered the commentator’s voice as the official rarely gets a minute of rest throughout the two halves.

The semi-final contest between Argentina and Colombia witnessed 19 illegal challenges in the first half and 22 reckless tackles in the second 45. The first Copa America semi-final observed 28 hasty challenges, questioning the teams’ tactics. Heartbeats raising high and intensity creeping in is a common notion but the fouls tally has to be reduced to prevent some heated minutes on the pitch. Painful blocks, incautious defending, and impetus tackles have seen the officials giving out yellow and red cards like Christmas cards.

Colombia knocked on Argentina’s door more than once but their colourless forward battery faltered in front of the goal. Los Cafeteros’ dominant display in the centre earned them a galaxy of chances but they failed to convert their opportunities. But Argentina’s first-half headache Luis Diaz once again spoiled their silverware party. An early free-kick by Edwin Cardona picked out the darting Diaz who fooled Pezzella with his strength and electrifying pace. Diaz escaped Pezzella and chipped the ball past a rushing Emiliano Martinez to equalise the scoring for Colombia.

With Argentina’s questionable tactics on showcase, a Colombian goal looked inevitable. Even after the unfortunate setback, Argentina forgot to come out of their shell as the Colombian strikers were blemishing Lionel Messi’s international silverware dreams. Other than Angel Di Maria’s gallops from the left-flank none of the Argentine strikers went full throttle in the second half. The Argentine backline looked shaky as Diaz and Cuadrado whipped in cross after cross to trouble Martinez and his defence.

THE HUNT CONTINUES FOR ARGENTINA

The referee’s final whistle at Brasilia after a heated semi-final fixture opened the doors for penalties. The popcorn was cooked as Argentina’s love affair with penalties continued. With a few demons to vanquish, La Albiceleste kept their nerves when it mattered the most. Defeating Colombia 3-2 on penalties, Messi’s army booked themselves a ticket to the Copa America final. Lionel Messi silenced his haters with a smashing strike to send David Ospina the wrong way as Argentina cancelled out Colombia’s first penalty.

But Emiliano Martinez’s heroic display saved the day as Argentina’s penalty struggles were thrown out of the window. A fantastic game of football ended with Argentina conquering Colombia 3-2 on penalties and setting up the perfect date night with Brazil in the final of the Copa America. The real question that remains is if the Brazilian Samba will propel or will Lionel Messi and company quench their silverware thirst on Saturday?

STAR OF THE MATCH

A silent protagonist in Argentina’s fairytale, Aston Villa’s goalkeeper Emiliano Martinez has been Lionel Scaloni’s vigorous weapon throughout the 2021 carnival of Copa America. The watery-eyes of Martinez after he had pulled off a heroic display against Colombia’s penalty takers spoke volumes about his magnificent journey. Solving Argentina’s long-term goalkeeping conundrum, Martinez added a hint of conviction with his jaw-dropping Premier League campaign. Emiliano Martinez, like a sponge, soaked Colombia’s pressure, stamping his authority against the men in yellow’s flying forwards.

He could have easily kept a clean sheet if Colombia wouldn’t have caught Argentina napping. But to his happiness, Martinez’s mention would surely be made if Lionel Messi conquers South America this Saturday. 3 penalty saves opened the doors for Argentina as Martinez’s mind-games reaped the desired results. With Brazil being the biggest threat to the Copa America throne, Lionel Scaloni would expect the youngster to pull another rabbit out of his hat when they face the host nation in the showdown.