ARGENTINA’S JOURNEY TO THE FINAL 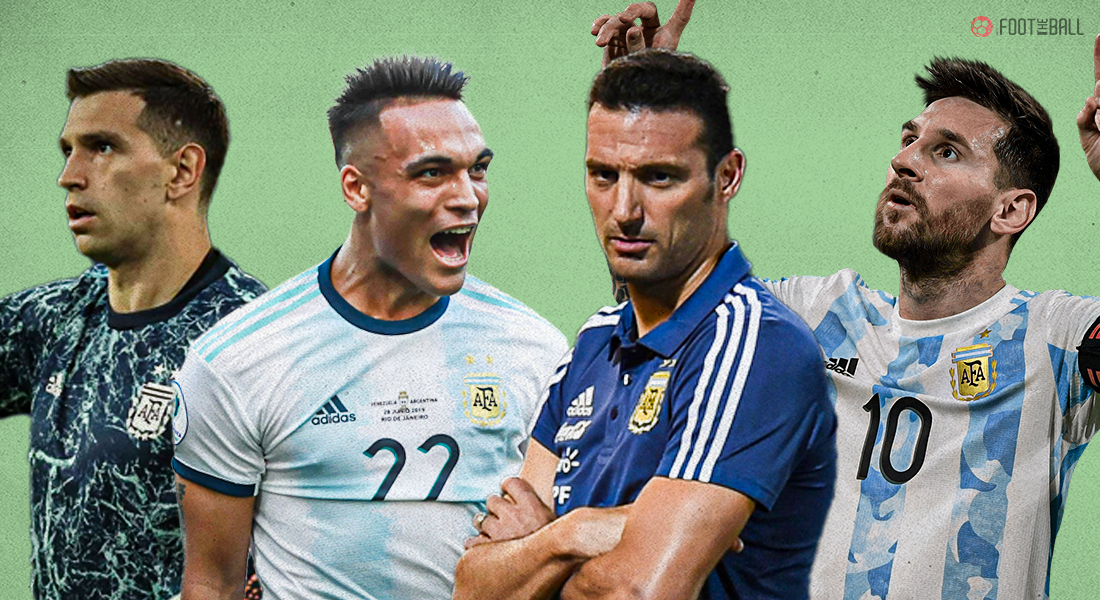 La Albiceleste has had a dream Copa America run until now and the only thing that stands in their way to glory is Brazil, another top team in domineering form. They have been one of the best-performing sides in the tournament and coach Lionel Scaloni has provided them with the tactical edge that they probably lacked before.

There have been many changes to the squad that last reached the final in 2016 and many old faces have been replaced by fresh talents. Lionel Messi, as expected, has been in top form for the country and is just one step away from achieving what he has yearned for all these years.

As Argentina prepares to take on Brazil in the final of Copa America 2021, let’s take a look at their journey to the final and how the tournament panned out for them so far –

Argentina looked shaky at the start of the tournament when they played against old foes Chile, who had defeated them in the final in 2015 and 2016. It was a 1-1 draw that saw a stupendous free-kick goal from the left-footed genius Leo Messi cancelled out by Eduardo Vargas and the teams shared points.

They have been on the rise ever since and played attractive attacking football, winning all of their remaining group games.

After passing the group stage with flying colours, they had a comparatively easier tie based on both quality and form and they made the most of it, beating Ecuador 3-0. Their next challenge was a motivated Colombian side that had knocked out Uruguay in the earlier round.

The match went into penalties despite Argentina dominating and creating many chances throughout the game. However, the result came in their favour despite Rodrigo de Paul skying his penalty and skewing their chances.

The inevitable had almost dawned upon Argentina and Lionel Messi when the semi-final against Colombia went into penalties. A delightful match that saw many good chances getting saved by either luck or the two brilliant goalkeepers ended in a stalemate. As Copa America kept the extra-time rule out of its format this year, the game went into penalties.

Cuadrado started the shootout and converted his penalty giving Colombia a head-start which was equalised by Lionel Messi’s sublime top corner finish. Then, the hero of the night, Emiliano Martinez stepped up and denied Davinson Sanchez’s low effort with a stretching save. Rodrigo De Paul had the chance to get Argentina in an advantageous position but failed to hit the target.

Then came Yerry Mina for Colombia but Emi Martinez yet again came with his heroics and made another stunning save. Leandro Paredes made no mistake and struck one past David Ospina to put Argentina ahead.

Both Miguel Borja and Lautaro Martinez scored theirs and kept the situation as-is. Edwin Cardona came to the last penalty for Colombia to keep them in the game. But the Aston Villa goalkeeper wasn’t having any of it. He kept the ball out by predicting the direction and became a national hero in his first-ever major international tournament for La Albiceleste.

Argentina didn’t had any major hiccups and successfully won five of their six games in the tournament so far. The only setback was against La Roja in the group stage where they could only manage to get a point.

The Lionel Scaloni led team was set to face Chile in their opening group stage fixture. They created a lot of chances since the beginning but couldn’t capitalise till the captain Lionel Messi stood over a dead ball and blasted it in the top corner from 25 yards. Claudio Bravo made a full stretch dive but couldn’t manage to reach the ball that was destined to go in.

However, Chile was awarded a penalty in the second half for Nicolas Tagliafico’s foul on Arturo Vidal. Vidal saw his penalty saved by Emi Martinez but Eduardo Vargas found the net on the rebound and brought the scores level. Messi couldn’t inspire the team to find another goal and they had to settle for a draw.

The 34-year old has directly contributed to nine of Argentina’s total 11 goals in the tournament so far, scoring four goals and assisting five in six games.

His four goals include two direct free-kicks as well, against Chile in the group stage and Ecuador in the quarterfinal. He has continued the scorching form in 2021 which was seen in the domestic season too while playing for Barcelona. He has made a total of 47 goal contributions since January for club and country combined.

9 goal contributions out Argentina's total 11 goals. Carried them to the Final. pic.twitter.com/GVzjbmaC0W

Apart from his brilliant on-field form, Messi has been in the headlines for his contract situation with lifelong club FC Barcelona. His contract with the Catalan club ended in June 2021 and is currently a free agent. However, he is fully focused on the national side right now and would want to end the international trophy drought on Sunday against Brazil.

The Paris Saint Germain winger and once the most sought-after forwards in the world hasn’t been at his usual best this season both in domestic and international football.

The 33-year old couldn’t retain his starting position with La Albiceleste and only got one start in this year’s Copa America. He came on as a substitute on five occasions but couldn’t make any major impact apart from an assist against Paraguay.

Angel Di Maria, once known for his brilliant playmaking and dribbling ability has lost his touch and is on a decline for the past few years.

He registered nine assists in 27 appearances in this year’s Ligue 1 could only find the net on four instances. He lost his starting spot to the upcoming 23-year old winger Nicolas Gonzalez from Fiorentina and Lionel Scaloni doesn’t look like changing his approach in the final either.

Argentina has a talented squad that has a perfect mix of youth and experience, and sufficient depth in most positions. However, they have struggled with the centre-back pairing and tried a different duo in every game in the tournament so far.

Lionel Scaloni has four options in the centre back position — Nicolas Otamendi, Cristian Romero, German Pezzella, Lucas Martinez and Lisandro Martinez. Centre-back pairings need time to build a partnership and coordination, and the constant changes can turn out to be dangerous for Argentina’s prospects in the final.

Brazil has a great attacking lineup that will constantly push at their backline with the likes of Neymar, Richarlison, Firmino having the speed and skills to test them.

Nicolas Otamendi, who is the likely candidate to start in the final considering Cristian Romero’s absence in the past three games due to injury, has been mistake-prone recently and might be the weak link that Brazil looks to exploit.