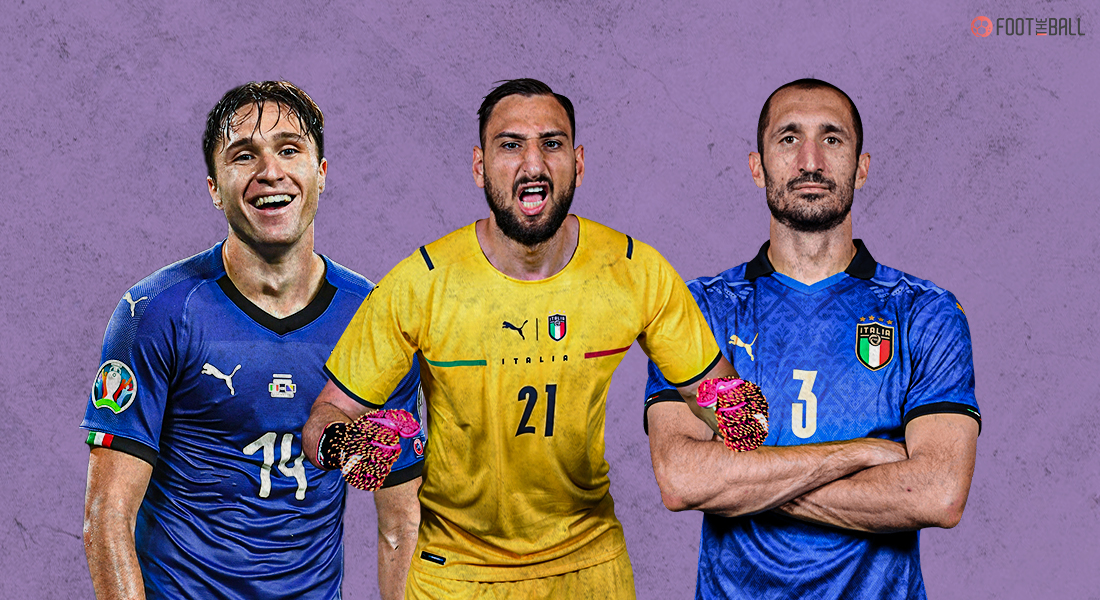 Italy are back in the limelight of the European Championships, having reached the final for the first time since 2012. The Azzurri have been a winning machine since Roberto Mancini took over in 2018, being undefeated in their last 33 matches. It comes as no surprise that they have been one of the most dominant sides at Euro 2020, and the reward for that is facing England at Wembley on Sunday.

Mancini and co. will be aiming to win the title in order to vindicate their winning form over the years. They have been one of the highest scoring teams at the tournament, paired with an extremely stingy defence. FootTheBall recounts the journey of Italy to the final.

Italy have scored 12 goals in six matches, while conceding only three. They began their campaign with a resounding 3-0 win over Turkey in the opening match of the competition. Goals from Ciro Immobile and Lorenzo Insigne supplemented Euro 2020’s first own goal to set them on their way.

That was followed up with another 3-0 win over eventual quarter-finalists Switzerland. Their final group game saw them claim a narrow 1-0 victory against Wales, which enabled them to keep three clean sheets in a row.

🔹 With two goals, 94% passing accuracy and six tackles, Manuel Locatelli's match-winning display for Italy against Switzerland was one of the standout statistical displays of Matchday 2 👏@FedExEurope | #EUROPZ | #EURO2020 pic.twitter.com/Yr88ikWJFh

The seven goals scored was also the highest by a team at this stage. However, the true test of their mettle started in the knockouts. The round-of-16 tie against Austria went goalless over the 90 minutes. Mancini introduced his substitutes towards the end of regulation time, a move which paid off spectacularly.

Federico Chiesa stroked home the opener before Matteo Pessina doubled the lead. That set up a frantic final 15 minutes of extra time, having to defend vigorously. Austria even managed to score a goal to reduce the deficit but the Azzurri held on.

That defensive nous would be on show again in the quarter-final, as they took a two goal lead before halftime. Belgium scored once and Italy were being forced back as time expired. They prevailed once more, to meet their opponents from the 2012 final.

Spain were certainly the more imposing of the two sides, but Italy held on to see the game through to penalties at 1-1. Goalkeeper Gianluigi Donnarumma made two key saves in the shootout to book their place in the showpiece fixture.

WHAT MAKE THEM SO GOOD

Italy’s performances have been based on a stout defensive shape combined with an ability to get forward in numbers quickly. Giorgio Chiellini and Leonardo Bonucci have been absolute rocks at the back, using all of their combined experience to marshall the backline.

Their midfield did look a bit overrun against Spain, but that is certain to be improved. Up front, Immobile has been floundering a bit in recent times which has led to others stepping to the fore.

That’s been a key area of joy for the Italians, as they have not had to rely on any one individual. The lack of a single, true superstar has helped them become more united as a team. Yes, there are players who are more experienced than others but that only helps in passing on the knowledge.

Some of the players who have flourished are making their major tournament bows, including Chiesa, Barella, Spinazzola, and Locatelli. They are aided by established stars like Verratti, Jorginho, Insigne and more.

The ability to play as a cousin cohesive unit has been mammoth. They lost Alessandro Florenzi early on in the tournament, before Spinazzola suffered an ACL tear leading up to the semi-final.

Both those setbacks could have detailed their momentum, but Mancini made sure they stay on track throughout. It is that kind of commitment to the cause and knowing what matters that is truly encapsulating a winning mentality.

To say that the road to the final has been too easy or too hard will be overselling both. Italy have found the reserves inside themselves to win from whatever position they were put in. The only team to win in normal time, the extra time and penalty shootout just know how to get it done.

Sunday remains the ultimate test for the Azzurri who have had to face a lot of ignominy over the years, highlighted by missing the 2018 World Cup entirely. However, they are now firmly back in amongst the best and nobody can say they do not deserve it.