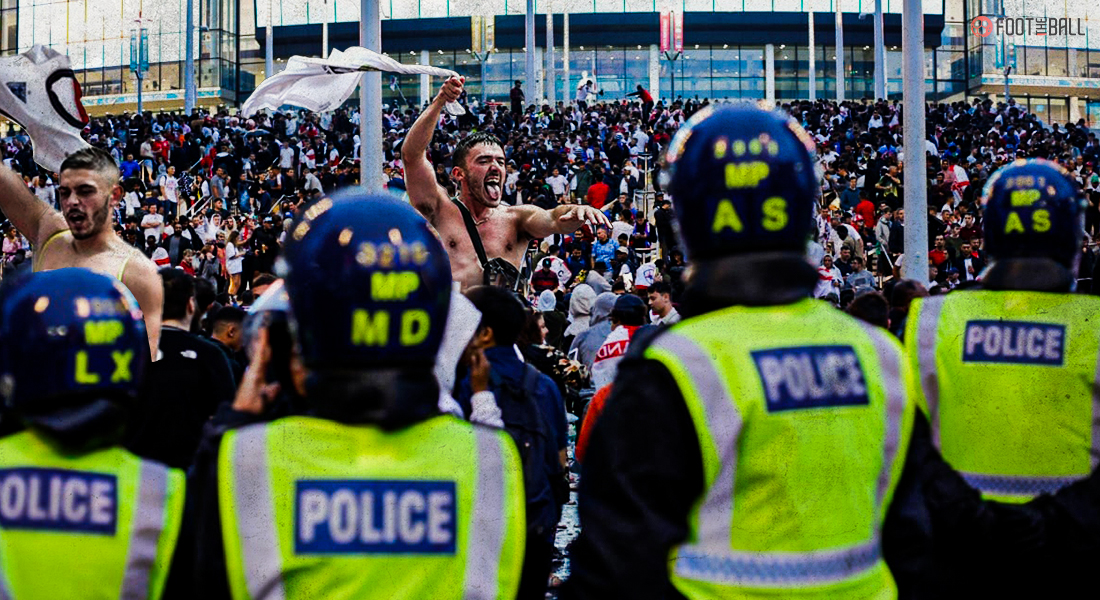 The Euro 2020 final played between England and Italy on the 11th of July was about to get canceled or postponed as ticketless English fans stormed the gates of the Wembley stadium just a few minutes before kickoff.

There was chaos everywhere as the security in Wembley couldn’t handle the overwhelming fans as they pushed their way past the security in a hopeless attempt to get into the stadium. There were even reports that the English fans were harassing Italian supporters and three people got gravely injured in the process ahead of the game. These drunk supporters are a disgrace to the English football community and the ruckus they created has put their names to shame for years to come.

How exactly did the chaos erupt and who is to blame for the mess caused by the English fans outside Wembley Stadium.

HOW CHAOS UNFOLDED OUTSIDE WEMBLEY

According to a number of Italian supporters, the road leading up to the Wembley stadium was the worst experience of their lives. There was trash everywhere, trees were being pulled down and there were violent fans in white pushing among themselves for no reason at all. The scene was no less than a battleground and all this was happening hours before the fans with the tickets were even allowed to enter the stadium.

At about 5:15, when the fans had to do their covid tests, the officials witnessed the violent nature of the English fans. The stewardesses, who were there to ensure the safety of the folk visiting the stadium, were seen running for their own safety instead. Fans were running past the covid checkpoints in huge numbers like a herd of wild animals.

At 6, a group of fans were seen pushing the barriers of the VIP zone of the stadium as the security stood there in utter confusion and hopelessness. On the other side of the venue, there fans were jumping over the barriers and even making it to the stairs to the outer concourse.

Febrile atmosphere at Wembley. This is near the main entrance to Club Wembley a few minutes ago where it looked like a group of fans broke through the security cordon. Stewards currently chasing people around. Not sure they’ll get all the way to the wine and canapés pic.twitter.com/YTIx8eQLz2

The officials stated that no one made it close to the actual stadium located at the centre, but according to some Italian supporters, there were people occupying their seats and snatching Italian flags just to stay in the stands. Outside, empty alcohol bottles were being thrown at the security guards and even flares were set off in the vicinity. It is really surprising UEFA decided to give the go-ahead for kick-off.

WHO IS TO BE BLAMED

It is obvious that the supporters are to be solely to be blamed of causing such carnage for no good reason, but we feel the authorities too could have done a lot more to reduce the damage. Fans entering one of the biggest stadiums in the world so easily is no joke.

First off, the number of people on security was extremely less. They stood no chance against the thousands of crazy British supporters. There were more than 30 people barging on towards a single security official. Any attempt made to stop this madness was going in vain but still, a few guards stood their ground. Reports suggest that the security officials were not that strong either and looked like University kids.

The barriers placed to stop people were less as well. The barriers were not even that tall as the drunk blokes stepped over them like pebbles lying on the ground. Some even used the barriers as platforms to get on top of toilet booths to jump over the walls of the establishment.

In a way, the UK government were also responsible for all this mess. Their decision to allow 60,000 fans into the stadium in a pandemic was risky, to begin with. The Wembley security officials even had the guts to say that no security breaches had taken place. Later the police admitted that ‘a small’ number of fans broke into Wembley. A total of 19 people in the police got seriously injured as they tried their best to reduce the havoc. Only 49 arrests were made as hundreds of people just fled the scene unpunished.

JUST IN – More and more security barriers are breached at Wembley as fans force their way into the stadium.

The Football Association has stated that they will conduct a full review to determine the ones among the ranks responsible for everything. But what is the point of that when the damage has already been done. English fans were also seen harassing Italian supporters celebrating their country’s win. As fellow football enthusiasts, we understand what it means to have your country play in the final of a tournament like this, but breaking the law and losing your mind simply cannot be justified.

Blue against Red at Wembley!