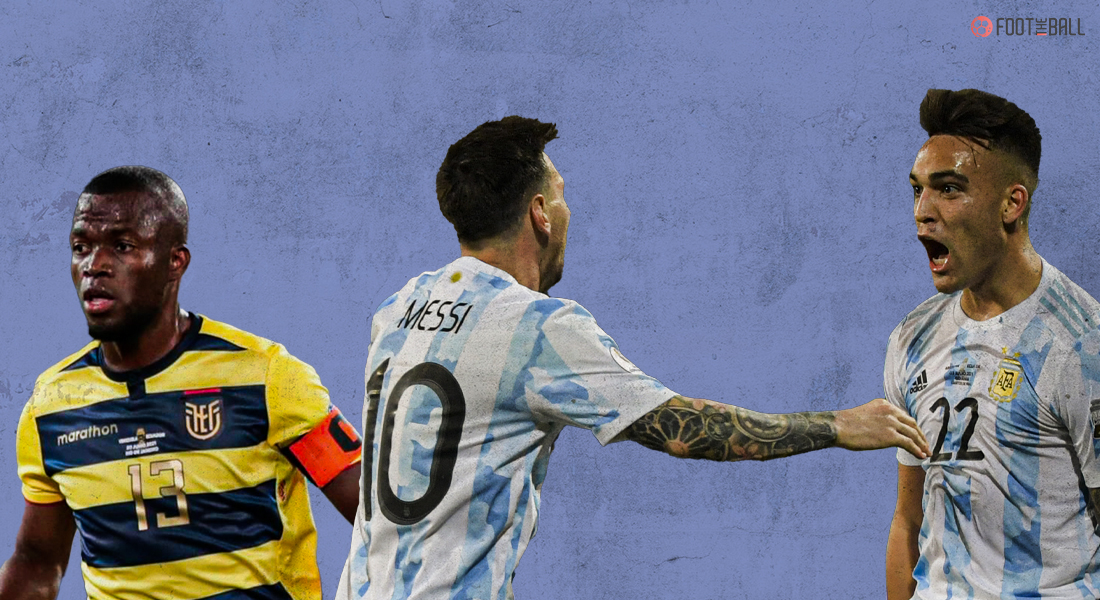 Lionel Scaloni’s troops entered the knockouts after demolishing an already diminished Bolivian army 4-1 while for Ecuador, the group stages asked them a few challenging questions.

Argentina created a flurry of chances with Lionel Messi being at the heart of it. But the questionable change information by Scaloni put immense pressure on Martinez’s shoulder who succumbed under the weights.

The favourites were battering the underdogs but the shackles never broke until the 40th minute of the game when Messi found an opening to release Rodrigo De Paul who smashed a rocket in an open Ecuador frame giving Argentina a well-deserved advantage at half-time.

Lionel Messi and Angel Di Maria pick-pocketed the Ecuador defence to find Lautaro Martinez in acres of space who smashed the ball into the roof of the net to double the advantage for Argentina. Messi added the final nail with a tremendous free-kick to sent Argentina through to the semi-finals. We at FootTheBall find out who the star player of the game was and 5 things we learned from the South American conflict between Argentina and Ecuador.

Coming into the South American brawl the footballing world knew that Argentina would be the one creating all the magic on the pitch while Ecuador would be interested in soaking pressure and hitting on counter-attacks. Unfortunately for La Tricolor, registering a single shot in Emiliano Martinez’s frame was a tough task. Mendez did sniff in an absolute banger in the 25th minute but a foul in the buildup cancelled Ecuador’s aspirations. On the other hand, La Albiceleste couldn’t stop creating chance after chance.

Martinez and Messi had two clear openings each, while the latter’s attempt rattled the post, the former’s attempt was saved by some brave last-ditch efforts. Lionel Scaloni’s men looked dazzling while fabricating a goal but faltered to convert the numerous chances they received. Fortunately for them, the defence was glued together, rarely giving La Tri an opportunity to exploit.

The deadlock finally broke just 5 minutes before half-time when Rodrigo De Paul had an empty net to finish the ball in. The goalkeeper had left his goal trying to rescue his side but the ball landed in Messi’s feet who assisted his 3rd goal of the tournament finding De Paul in acres of space who bulged the net with his thundering strike.

In the recently concluded Champions League final, the managerial grandmaster Pep Guardiola opted for a change in the information in the final battle. Choosing an attacking City team sheet, Thomas Tuchel’s Blues army exploited the holes grabbing a goal spoiling Pep’s European dreams. An overthinking Lionel Scaloni tried mirroring the veteran when his team locked horns with a fighting Ecuadorian army. La Albiceleste’s shining star in Copa America, Papu Gomez found himself sitting on the bench. A rusty and robust Lautaro Martinez once again marched into the playing XI. The formation changed from 4-2-3-1 to a 4-3-3 to fit Martinez who once again had a disappointing night. The midfield duo of De Paul and Lo Celso couldn’t exploit the chances and constantly lost possession for major parts of the half.

The midfield duo of De Paul and Lo Celso couldn’t exploit the chances and constantly lost possession for major parts of the half. The move of including Nico Gonzalez in the team sheet completely backfired. The Fiorentina striker was caught napping twice or thrice and constantly failed to pounce on the billion opportunities presented to him. Just before the break, Gonzalez had an empty net in front of him and a touch of the ball could have doubled Argentina’s advantage but Gonzalez smacked the ball above the frame from point-blank range. Lionel Scaloni’s tactics of not including in-form Aguero and Papu Gomez boomeranged until they earned a nervy 1-0 advantage. But at the end his wise substitutes in second half did make a difference. Scaloni might not get it right from the start of the game but does have the ability to come up with real time tactical solutions.

ARGENTINA LEAD BUT AFTER MISSING A SERIES OF CHANCES

La Albiceleste finally unlocked the doors in the 40th minute of the game. A tremendous shot by Rodrigo De Paul excited a labouring Argentine team who couldn’t find an opening for large parts of the first half. Although the flamboyance of Messi was on showcase in Brazil, the lacklustre strikers almost hindered his international silverware dreams. The duo of Martinez and Gonzalez were served a galaxy of chances but neither of them could grab a goal from their golden opportunities.

Martinez sneaked behind Ecuador’s defence twice or thrice but failed to find the target. While for Gonzalez, the striker was just having a disheartening outing. The one-goal advantage never gave Argentina a cushion to blindly push forward without worrying about conceding a goal, something which was visible against an exhausted Bolivian outfit.

The South American contests in Brazil this summer have been nothing less than hard-fought battles. With a physical brawl on display, ruthless tackles flying in is no shock. While the fouls committed tally increases each minute, the referee’s job becomes infeasible and unthinkable. Argentina vs Ecuador fixture drained the official as the man with the whistle failed to stamp his authority from minute one. As result players were constantly brought to the floor, reckless challenges unveiled themselves, and an injury-prone game was on the cards.

Talking about cards, the two teams committed a total of 30 fouls throughout because of which the referee had to produce 4 yellow cards in the first half and 1 yellow card and 1 red card to Piero Hincapie in the second half. The heated Brasilian atmosphere shrouded the official’s jurisdiction as both sets of players weren’t happy with the quality of referring.

A WIN FULL OF LESSONS

Argentina switching formations, Martinez and Gonzalez being blunt in front of goal, and the midfield failing to unlock Ecuador’s defence almost cost Argentina a quarter-final win against Ecuador. La Albiceleste were the opposite of their first-half exhibition. They did land the killer blow in the 85th minute but a nervy 1-0 advantage throughout the second-half could have disrupted their silverware dreams at any time. While a Colombian challenge awaits them, Lionel Scaloni’s army will look to forget what went down in Brazil today.

The galaxy of mouth-watering chances should have been converted by La Albiceleste as it would have reduced the pressure on the backline. A heroic performance by Emiliano Martinez saved the day for Scaloni otherwise we could be well prepared for a shocking result. Although the 3-0 scoreline might look magnificent, Argentina didn’t enjoy a convincing game against Ecuador who penetrated their rivals quite a few times.

PLAYER OF THE MATCH

Well whenever an Argentina eleven comes on the pitch, the commanding man for La Albiceleste mostly is Lionel Messi. La Pulga once again brought his A-game to the table in the South American quarter-finals. A jaw-dropping free-kick in the last seconds of the game and 2 perfectly delivered assists helped Argentina run riot against Ecuador. Copa America 2021’s top-scorer and top-playmaker, Messi sealed Argentina’s semi-final berth with a colossal free-kick. The magician constantly exploited a shaky Ecuadorian backline with his through-balls and off the ball darts.

Assisting Albiceleste’s opening goal, Messi galloped ahead to pick the ball catching the goalkeeper off his line before finding De Paul who could have finished with blindfolds on. Although Argentina laboured throughout the second period of the fixture, Messi diligently troubled the rival defence asking questions and not letting them off the hook. Ecuador was robbed of possession late in the game and it was a 3vs1 situation when a selfless Messi passed the ball to Martinez who nestled the ball into Ecuador’s goal.

Finally, Argentina sealed the ticket with Messi’s brilliance in stoppage time. A penalty shout was overturned in a free-kick by VAR with Messi taking the set-piece responsibility once again. A thundering strike to defeat a leaping Hernan Galindez as the Ecuador shot-stopper saw the Argentine rattle his net. Ecuador had no answers to Messi’s brilliance as La Pulga continued his international silverware hunt.