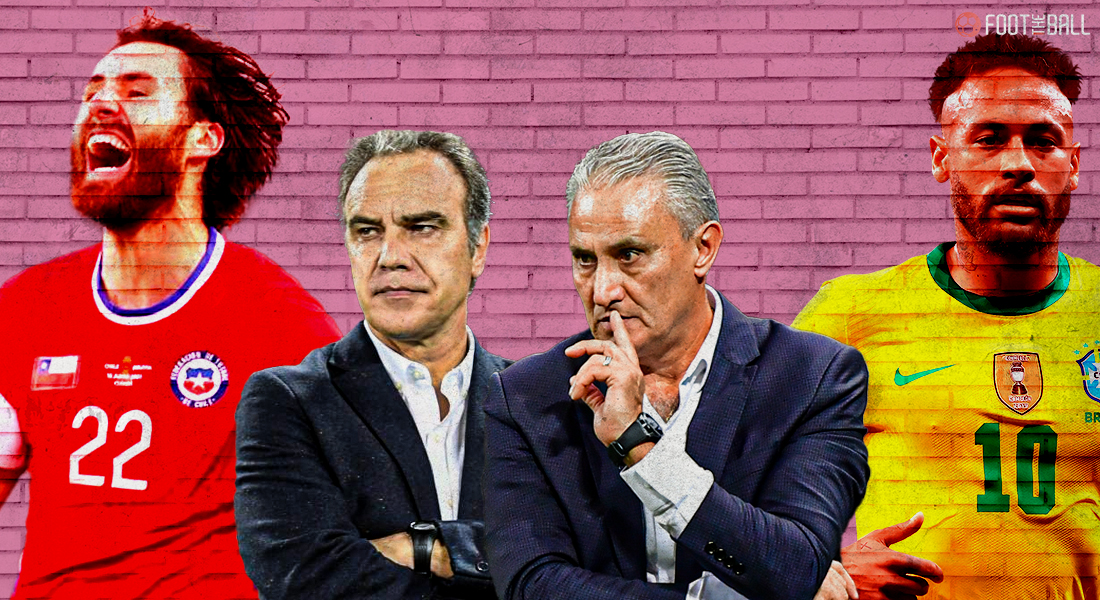 Copa America 2021 is progressing into the knockout rounds and one of the most exciting fixtures awaits us on Friday, July 3, when Brazil will host Chile in Rio de Janeiro. The quarter-final match will be a proper display of what is on the line, and how important it is for both sides.

The consecutive winners of the 2015 and 2016 edition Chile haven’t been at their best in the group stage without their highest goalscorer Alexis Sanchez. They could only manage one win in the four group games and finished fourth. On the other hand, the defending champions Brazil remained unbeaten and topped the group with 10 points from the available 12.

La Roja was handed a defeat by Paraguay in the final group game despite having nearly 70% of the ball. Martin Lasarte’s side could only manage to score three goals in the group stage and are facing a team with the best goalscoring record. The Thiago Silva-led team scored 10 goals and only conceded two goals in the four group games.

Currently ranked third in the FIFA World Rankings, Brazil are one of the clear favourites being the hosts as well. Chile have a big challenge prepared for them as they haven’t been really convincing in their performances so far.

The winner of this tie will face the winner of Peru vs Paraguay in the semi-final of this year’s Copa America.

The hosts have no injury issues in the team so far apart from Caio and Felipe and have a well-rested starting eleven ready to get back to winning ways after being held to a draw by Ecuador.

Head coach Tite is likely to field a 4-3-3 formation with the trio of Neymar and Gabriel Jesus and Roberto Firmino upfront.

Chile will have to continue without Alexis Sanchez as he is yet to join the national squad and continues his recovery in his home country. Lasarte will have a difficult job fielding a balanced team to get the better of Brazil.

Chile is likely to go with a 4-3-3 formation as well led by the veteran midfielder Arturo Vidal. England born Ben Brereton has been a great find for Chile and scored the winning goal against Bolivia in their only win and is likely to start on the left flank.

Paris Saint Germain winger Neymar Jr. will hold the key for Brazil’s attack as he has done over the years. He won’t be alone in the pursuit of scoring goals with the star-studded Brazilian attack but will definitely be the most likely candidate to seal the win with his incredible skills and ball control.

No player has provided more assists for Brazil than Neymar Jr. pic.twitter.com/TTTTod0B7p

He has scored two goals in the tournament so far and will want to contribute more in the knockouts for his side. The anguish of missing the last edition of the tournament which Brazil won without him will also be a motivating factor and the boastful striker will want to make his mark this time around.

Ben Brereton has become a fan-favourite since his first start for Chile against Bolivia where he scored the winner with a beautiful and composed bottom-corner finish. The 22-year old has a lot of expectations both from Chile and England and will need to pounce on every opportunity to get past the experienced and talented Brazilian defence.

He will be supported by the veterans Eduardo Vargas and Arturo Vidal with the aim of breaching Brazil’s goal.

Despite all the challenges including that of missing star forward Alexis, Chile has made its way to the quarterfinals and nothing is certain about knockout rounds. Brazil can’t be lenient considering they are the favourites and will have to give their all to fend off the Chilean counter-attacks. However, the stark difference in quality and approach is visible and the hosts clearly edge over La Roja.

FootTheBall predicts a 2-1 win for Brazil, sending them through to the semi-finals.