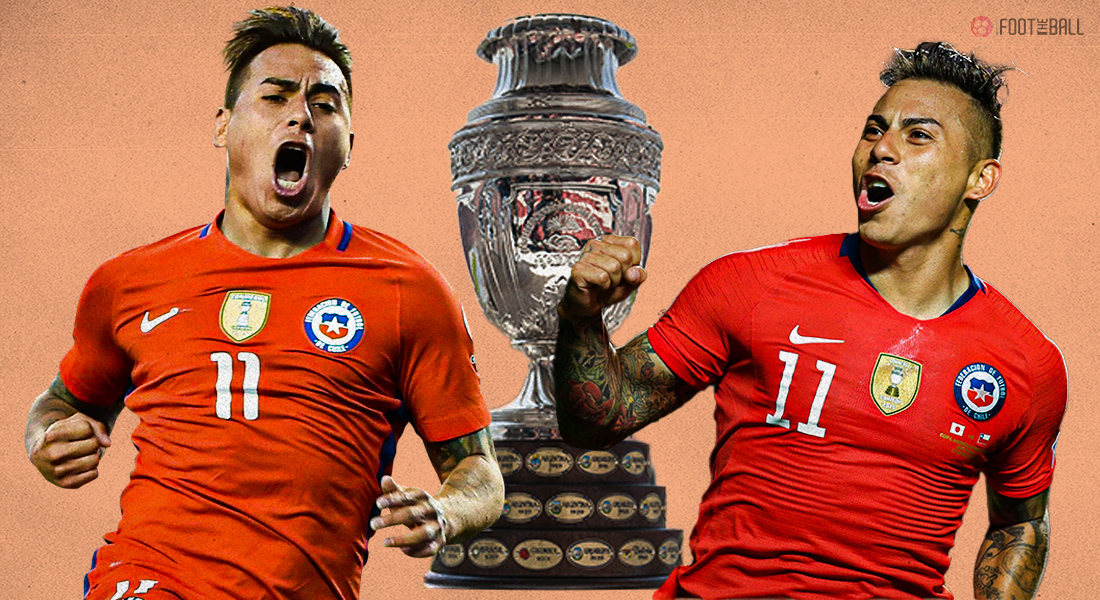 A robust Copa America conundrum has finally been answered. With reigning champions Brazil hosting South America’s oldest competition, the battle for silverware is going to be a tough one.

Lionhearted warriors looking to establish their territory, this year’s Copa America is surely gonna be a clash of the titans. A few grandmasters will look to retain their crown while some new cubs will experience the energy of the battlefield for the first time.

Although one player who could outshine his counterparts this summer is La Roja’s, Eduardo Vargas.

The two time champion of the prestigious Copa America title has once again landed in Brazil with fire in his eyes. With Chile’s golden generation almost coming to an end, this could be Varagas’ last shot at more silverware.

VARGAS – A LEGEND FOR LA ROJA

Undermined by weaker times, Chilean football faced a decline a few years back. Although a revamp followed and La Roja rose from its ashes. Players like Arturo Vidal, Eduardo Vargas, and Alexis Sanchez were some of the torch-bearers of the revolution. Knocking from time to time on Chile’s door, Vargas impressed the selectors with his impressive performances with the domestic club, Cobreloa.

His hard work paid off when Vargas was given his first international cap just 2 weeks before he turned 20. And since then Vargas has never looked back donning the red jersey 94 times. With 38 goals, Vargas just sits behind current teammate Alexis Sanchez with 43 goals on the scoring charts for Chile.

With both Sanchez and Vargas teaming upfront for Martín Lasarte’s troops, Chile’s chances of conquering South America have been bolstered.

Vargas is a straightforward talent to analyze. He’s a small-heightened striker with loads of passion and character, who depends on his speed and deception to keep Chile out of danger. A muscular physique mixed with an unstoppable speed, Vargas is the perfect foil to the flair of Sanchez. He brings relentless running and clinical finishing to this Chile side.

Copa America Centenario, a tournament celebrating 100 years of Copa America will be remembered for Vargas’ heroics. The top scorer of the competition was head and shoulders above others, guiding La Roja to their second piece of silverware in two years.

With a new summer of South American football approaching, Vargas’ role in Martín Lasarte’s setup is going to be important. Chile’s attacking colossus will once again look to turn back time and score pivotal goals for his country. With Chile seeded in a difficult Group-A, Vargas will have to bring his A-game to Brazil to make it to the group stage.

A hungry Argentinea looking for an international trophy, an Uruguayan team looking to end their quarter-final curse, and two underdogs Bolivia and Paraguay looking to prove a point, Chile’s journey could get difficult.

If the experienced pairing of Vargas and Sanchez clicks, a third Copa America title could be one the cards for the South American squad.

TOO OLD FOR THE BATTLE?

Not only Eduardo Vargas but the whole of La Roja’s roster is made up of players who can be deemed ‘on the wrong side of 30′. With Vargas himself being 31 years old, the quality of the striker has considerably declined. A challenging season has ended for most of the players and the mental and physical exhaustion could take control of the players.

Plus Vargas, a behemoth for his international squad has been a benchwarmer in Brazil this year. Playing for Atlético Mineiro, the talismanic striker has featured just once on the team-sheet this season.

A 31-year-old short on match practice, Vargas’ body might not be equipped to battle in a dynamic tournament. With just a handful of days between each game, the Number-11 will be outplayed by young defenders this summer.

Another factor is that Vargas’ dwindling career hints at an injury that could be troublesome for Chile. Managing everyone’s workload will be crucial otherwise a shock could be awaiting the red army.

A jam-packed season of football and Chile will look to dethrone the Selecao to capture their kingdom once again. Chile’s old king will look to put his game face on when he prepares for the final war.

With Vargas in their squad, Chile’s possibilities are strong but it won’t be easy for the striker. Perhaps the rest for his club could work in his favour – perhaps it is time for Sanchez to be the support to Vargas’ protagonist this summer.