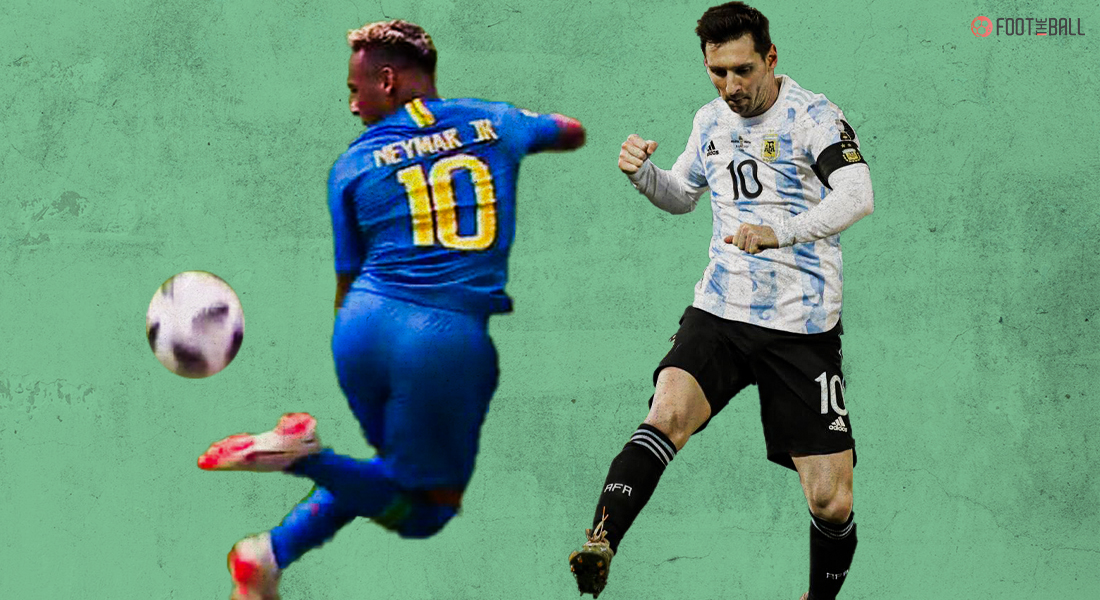 The World of football will bear witness to one of the most anticipated finals in South American history. This isn’t the first time that Brazil and Argentina meet in the finals, but like always, the gravity of the event is bettered by a few! Brazil and Argentina’s No. 10’s, Neymar and Messi, will face-off in what is expected to be one of the most-watched footballing matches of recent memory.

Words might not be enough to describe the amplitude of the mega-event. Two countries that have a colossal worldwide fan base, featuring two players who are regarded as the most talented players to ever dawn the green. The beautiful game never ceases to amaze us and this final will likely be nothing short of mesmerising.

As these two legends of the game gown their No.10 jerseys for their respective countries, the world will stand still to witness their wonder. Two players that hone the opposite flanks, one with an impeccable left-foot, one that just cannot be dispossessed, the other with otherworldly skills, beating players for will. If not for the pandemic, tickets would have been sold ten times over just to witness these two footballing phenomena in action.

La Pulga and Juninho were part of a deadly trio in Barcelona that dreaded any defence in the world. Skill, tricks, finishing, creativity, entertainment and most importantly, goals, were in abundance when they took to the field. Barcelona was simply unstoppable during their reign. Messi and Neymar developed a friendship and chemistry that continues to date. But friendship will take no precedence as they go head-to-head, vying for a chance to win their first major international trophy.

It's all on the line when Neymar faces Messi 👀 pic.twitter.com/rvukQTld1T

There’s simply too much pressure on their backs. The fight between Brazil and Argentina might be more than just these two players, but to the average fan, there’s nothing more enticing than their presence. Like Pele and Maradona before them, these two have never won the South American trophy before. This might just be Messi’s last attempt to win the coveted cup, and although Neymar has a bit more time on his hand, we do not expect him to back down one bit. One of them will have a chance to rewrite their history for the better.

CAN’T BE DEFINED BY NUMBERS

Well, ironically, let’s start off by defining them by numbers! Messi is leading both the goals and assists charts with four goals and five assists. His hunger to win his first major international trophy with Argentina is evident in his performances. Messi isn’t here to joke around; he has been exceptional in every game. Simply the best outfield player in all the matches he played. This little man, like always, has carried his country to the finals.

Neymar is not far behind his former teammate either. The Brazilian has scored two goals and assisted thrice in his five appearances. Harried and bullied Neymar never gave in, his touch is too good for the opposition to handle. While he may be trailing his idol in goals and assists, the chances the left-wing playmaker has created has been phenomenal. If his teammates had better finishing abilities, Neymar would have easily been at par with Messi on assists.

To be frank, defining these players by running their numbers is an absolute injustice to their presence on the field. Neymar may have not scored the most goals but his presence in every game was paramount. The total entertainment package did not fail to amuse us! Be it a pass with his back or a mazy run through a crowded defence, Neymar was exhilarating. None in yellow and blue commanded the ball like their No.10. The only option defences had was to bring him down. Neymar played the kind of free-flowing football that defines the Brazilian way of Ginga.

Messi on the other hand received more protection from his teammates. The 34-year-old was surrounded by his teammates but his impact was nothing short of inspirational. Messi has cast a spell on the ball and none has been able to break the spell. Impossible to disposes of, the Argentine captain was once again mesmerising to watch. Creating at least six big chances per game, the La Pulga’s effect was overwhelming in an underwhelming Argentine side.

WHO WILL COME OUT ON TOP?

Neymar may have been one of the best players in the tournament but once again he is overshadowed by the G.O.A.T. This enticing finale might well be Neymar’s chance to prove his mettle. Messi has had an unbelievable number of unlucky finals with Argentina, a record he will do well to break this time around. With a lot at stake, the wait is worthwhile.

Brazil’s defence has been excellent so far. No one has really tested Allison or Ederson in goal throughout the competition. Emiliano Martinez on the other hand has been more than impressive. Both defences will have a lot to worry about as these two teams gear up to take on each other.

Drama is brewing in the #CopaAmerica finals between Brazil and Argentina 🔥. With Messi playing some of his best football some Brazilians have started to support him. This has provoked Neymar who has dedicated whatever the Selecao will do to those against them! pic.twitter.com/c1GMIIgHyd

The battle for eternal glory is just a matter of hours away! Will Neymar shower his flicks or will Messi best his curse!