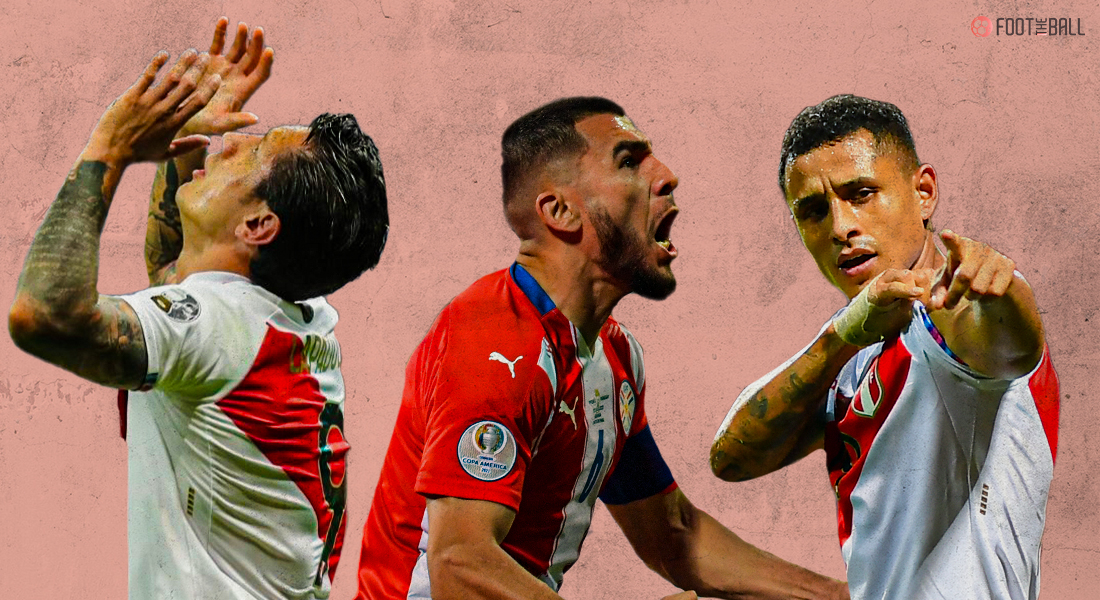 Peru earned a spot in the semi-finals of the prestigious Copa America tournament after conquering Paraguay 5-4 on penalties after a hard-fought 90 minutes of football ended 3-3.

A roller coaster event in Brazil, the battle of the underdogs was a mouth-watering affair. When one team established their footing, the other looked eager to stamp their authority and vice-versa.

Paraguay opened the scoring with a well-rehearsed set-piece in the 11th minute of the game. But Gianluca Lapadula’s heroics turned the game in Peru’s favour. An avoidable red-card to centre-back Gustavo Gomez destroyed the Dark Horse’s aspirations. But a beautifully practised corner kick equalised the scoring as the coaster took another turn. Peru netted another splendid goal courtesy of Yoshimar Yotun but Gabriel Alvalos’ first goal for his country took the game to penalties.

Peru won the penalties 4-3 as they secured a semifinal berth for the 4th time in 5 Copa America campaigns.

END TO END ACTION IN BRAZIL

A battle between the two challengers, Peru’s match-up against Paraguay earned colossal amounts of attention. While Brazil brushed aside opponents in Group-B, Peru stood strong in a windy Copa America group stage. Paraguay had been the true definition of ‘Dark Horses’. Surpassing South America’s expectations, Paraguay were second until its final group stage defeat to La Celeste. Frustrating a strong Albiceleste outfit, Eduardo Berizzo’s troops had leapt over different hurdles in Group-A.

When the two outfits locked horns on Friday a park-the-bus style of play was expected. With the two teams looking to batter each other on counter-attacks. Fortunately for the fanatics, the teams arrived with a completely different outlook. Creating waves and waves of attacks, Paraguay and Peru weren’t holding back. A poacher’s finish by Gustavo Gomez gave La Albirroja an early advantage. The ball fell kindly to Gomez who could have finished with a blindfold on. Peru accepted the setback and after a minute or two of establishment attacked the opposition’s fortress with full throttle. An equaliser 10 minutes later and another strike in the last knockings of the first half demolished the Paraguayan dream.

Although Peru was Group-B’s silver medalist, they hadn’t impressed the way Paraguay had. Participating in Copa America’s Group-of-Death, the road to the knockouts wasn’t easy for a battling Paraguayan outfit. But even after bouncing off and shrugging off difficult challenges in the earlier stages, they didn’t have an answer to Peru’s hard asked questions. The underdogs in the battle of underdogs, Peru entered the arena in Brazil with not so high expectations. Paraguay’s dominance was on display within minutes when the Los Guaranies broke the shackles earning a much-awaited lead. But Peru’s ambitions and bravery overtook the dominance of Paraguay as Los Incas equalised the scoring just 10 minutes later.

A steaming low-cross by a galloping Carillo gave Gianluca Lapadalu the perfect opportunity to increase his goal-scoring tally. With 2 goals under his belt, Lapadalu became Paraguay’s top scorer in Copa America as the fight to glory continued for Ricardo Gareca’s army. And the turning point came five minutes before half-time when the flamboyance of Peru’s midfield brought down the Paraguay defence to their knees. Another opportunity for Lapadalu and another goal for the Peru striker. The goal-scoring machine’s third goal of the tournament, as he joined the elite company of Argentina’s Lionel Messi as the top scorer of Copa America 2021.

The White and Reds had broken all records when it came to illegally bring down the rival players. Committing an unimaginable 64 fouls in the 4 matches, Paraguay’s defensive woes were the talk of the town. Flying into tackles, horrible defensive techniques, and an exasperated eleven, the Paraguayan squad seemed South America’s new hooligans. Whenever put under minuscule pressure, the backline would erupt, destroying the defensive structure of the team. The quarter-finals against Peru was another example of what the Paraguayan foul making company can fabricate. 6 unnecessary and rash tackles before the break demolished their semi-finals hopes.

But the worst moment arrived when the captain of the ship Gustavo Gomez lost his head and indulged in a fight with the official. Gomez was booked minutes before his second yellow card because of a protest filled with anger. And after Lapadalu and Gomez indulged in a one-on-one, the former brought down Gomez which the referee failed to notice, frustrating the captain. A heated exchange with the official earned Gomez his second yellow card which converted into a red giving him marching orders. But the captain didn’t leave the pitch without threatening the official, questioning the official’s authority.

THE BRAVERY OF 10-MEN

With five corners and two goals, La Albirroja were proving deadly during set-pieces. Lapadula’s first-half brace and Paraguayan leader’s childish red card had dented the latter’s semi-finals dreams. But an injection of team spirit, hard work, and determination by Eduardo Berizzo turned the tables for Paraguay. The team with 10-men on the pitch started dominating the squad with 11-men. Spain’s brawl with Switzerland had proved why facing a team with a man down could sometimes be a challenging task.

Paraguay closed the floodgates as Peru rarely saw a minute of possession. And the equalising moment arrived in the 54th minute. A looping delivery came into the box from a corner which was greeted by the head of a Paraguayan midfielder who presented the ball to centre-back Junior Alonso. A steaming Peru shot-stopper couldn’t nullify Alonso’s threat as the Atletico Mineiro defender thundered the ball into the roof of the net. The Paraguayan bench erupted as the equaliser was nothing less than a winner for the depleted army.

Cristiano Ronaldo is often subjected to criticism for scoring goals from the spot-kick. But scoring from 12-yards isn’t a cakewalk. Ronaldo and Bruno Fernandes might have mastered the art of scoring penalties, the footballing world still has to make a lot of efforts to match the Portuguese’s levels. The first quarter-final of Copa America produced a magnificent 90 minutes of football. Peru’s advantage was met by Paraguay’s constant equalisers as Gabriel Avalos’ last-ditch efforts took the game to penalties.

David Martinez, who jumped to take Paraguay’s third spot-kick, blasted the ball over the goal frame. But Santiago Ormeno couldn’t give his outfit an early advantage as his effort was saved by a diving goalkeeper. Paraguay’s nervy penalty shootouts gave Peru the perfect opportunity to seal the deal which they did. Miguel Trauco’s scintillating finish from the spot booked Peru’s semifinal berth fascinatingly.

A battle of titans, the South American carnival witnessed a few wonderful performances on Friday. Centre-back Junior Alonso’s heroic equaliser or playmaker Yoshimar Yotun’s magnificent winner, the world experienced a showcase of jaw-dropping talent in Brazil. But one player who took the quarter-final by storm was Benevento forward Gianluca Lapadula. The spectacular striker had never found the back of the net playing for his country. But since the start of the Copa America Lapadula was starving for goals. After Peru was thumped by Gustavo Gomez’s early strike, they looked at Lapadula to equalise the scoring and the striker didn’t disappoint.

A splendid finish in the bottom corner reduced Paraguay’s advantage. Soon Lapadaula caught the rival defence napping as he exploited the hint of space given to him exploring in the rival box. The magnificent endeavour produced the perfect result as Peru earned a timely advantage. The industrious forward laboured his way into the second half pouncing on every opportunity presented to him while creating a handful of chances for his teammates. After the game finished at 3-3, the fight went onto penalties where Lapadula was once again called upon. And the forward impressed the world once again with his thundering penalty kick to send Peru to the semi-finals and send Paraguay back home.