Match Report: Peru 3-3 Paraguay; Peru Win 4-3 on Penalties as Match Goes Right Down to the Wire with Paraguay

Peru hadn’t lost any of their last 5 games with Paraguay, but still were stretched by the Paraguayans to the maximum possible limit in Goiania before triumphing 4-3 on penalties.

Paraguay and Peru clashed in an entertaining match that had it all – from last-minute equalisers to red cards being shown to players of both teams.

And fittingly after an evening of high-intensity drama in Goiania in central Brazil it all came down to a penalty shootout to separate the two sides.

And it was only after sudden death had kicked in that the winner of the match was decided as the Peruvians won 4-3 on penalties after the match ended 3-3 at the end of regulation time.

Paraguay were dominant from the word go in this match as the first quarter-final of Copa America 2021 saw Los Guaranies dictating the tempo of play at the Estadio Olimpico Pedro Ludovico.

The opening exchanges saw Hector Martinez have a go from distance as he released a shot from outside the box in the 8th minute only to see it go well over the goal’s crossbar.

But the Paraguayans were duly rewarded for their opening effort as Gustavo Gomez opened the scoring from a set-piece situation in the 11th minute. Paraguay earned a corner that saw Gallese saving a header in the bottom left corner of the goal.

The ball fell kindly on the feet of Gustavo Gomez who didn’t make any mistake in giving Paraguay the lead that they deserved for all their huffing and puffing in the early stages of the match.

PERU CHANGE THE TIDE OF THE MATCH; PARAGUAY DOWN TO 10 PLAYERS

Gianluca Lapadula brought the Peruvians back into the game with a much-needed goal just 10 minutes later in the 21st minute. Once again Peru showed why they were the runners-up in the last edition of the tournament.

The Benevento forward’s goal was followed by both teams looking to find a way through, but just as the first half was coming to an end Lapadula once again got on the score sheet to seemingly turn the match on its head.

He scored his 3rd goal in Copa America 2021 to give Peru the lead from an assist by Yoshimar Yotun as Paraguay saw things worsening for them with a red card being shown to Gustavo Gomez for a horrendous foul in first-half stoppage time.

As the referee blew the half-time whistle, the Paraguayans were left wondering what went wrong for them in the first half as they fell behind after having taken the lead early on.

It was important for Paraguay to make a statement of intent right from the start of the second half, and they started the second period of the game in similar fashion to the first. 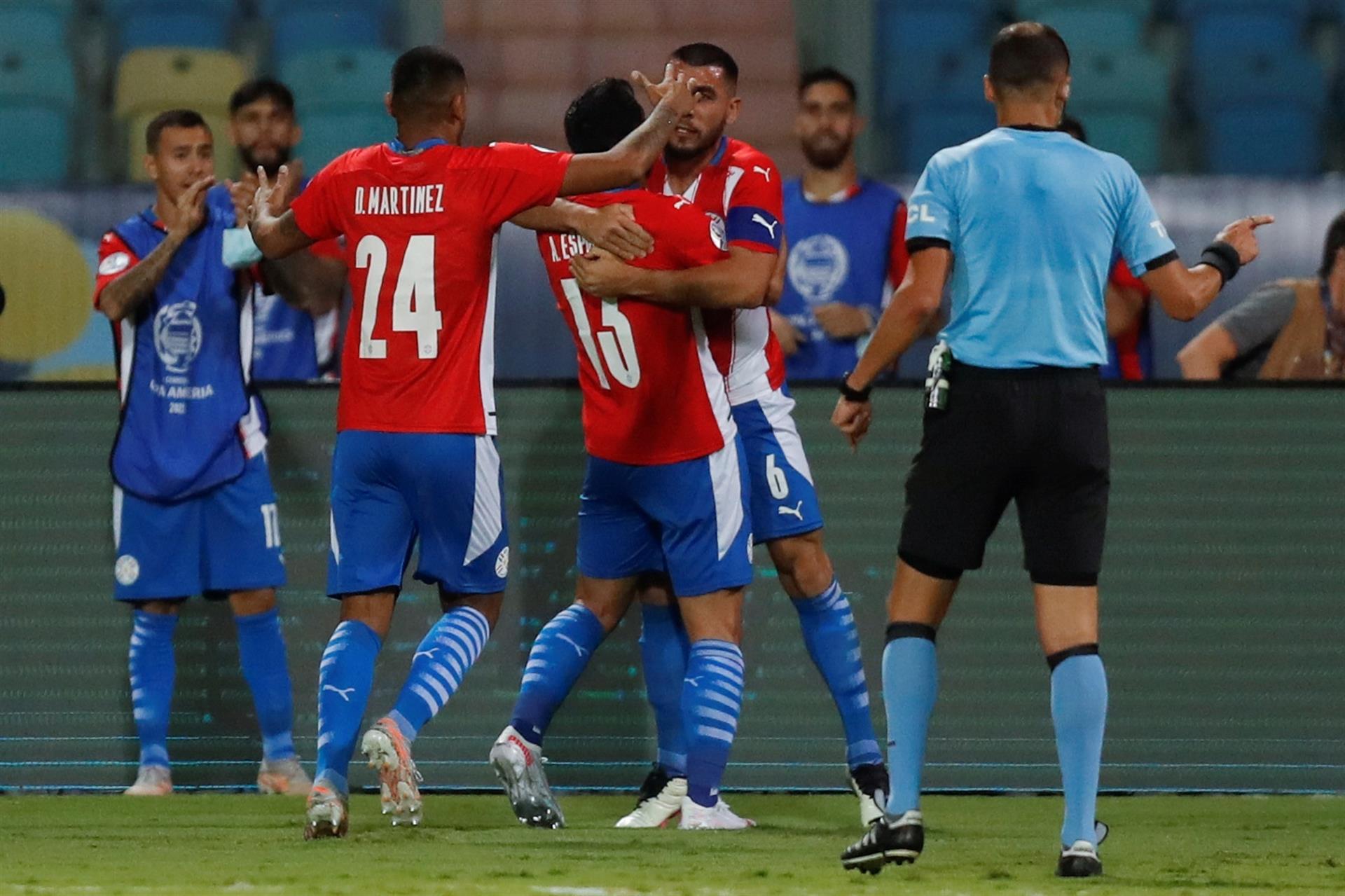 In the 54th minute, the Paraguayans earned a corner and once again they converted this set-piece situation into a goal. Junior Alonso was this time the protagonist for Paraguay, who were down to 10 players for the entirety of the second half.

The Atletico Mineiro defender took a left-footed shot from the left side of the six yard box that ended up in the top left corner to level the scores in Goiania in central Brazil.

The Peruvians were in an advantageous position after Gustavo Gomez’s sending off and it was only a matter of time before it benefitted them. Andre Carrillo’s ball found Yoshimar Yotun and the Cruz Azul player gave Peru the lead once again.

Yotun relased a shot from outside the box that took a heavy deflection on its way to the back of the net to apparently win the match for Peru.

But Andre Carrillo was given his marching orders soon after being shown a second yellow card for a cynical foul as Peru were reduced to 10 players themselves.

And Paraguay took full advantage of this situation as Gabriel Avalos fired in the equaliser from point blank range in the 90th minute of regulation time to take the match to penalties in Goiania in Copa America 2021’s first quarter-final.

The match, instead of going into extra time, went straight to a penalty-shootout between Peru and Paraguay at the Estadio Olimpico Pedro Ludovico – as is the rule in knockout matches in the world’s oldest international tournament.

Hector Martinez and Braian Samudio did not find the back of the net for Paraguay to seemingly hand over the advantage to Peru, but they didn’t capitalise on it at first.

Peru’s Santiago Ormeno and Christian Cueva saw their penalties being saved as the shootout stretched to sudden death with the score tied at 3-3 after both sides had taken 5 penalties each.

And it was here that Peru finally won it after Paraguay’s Alberto Espinola didn’t convert his chance and left Miguel Trauco with the opportunity to win it for Peru and Trauco held his nerves to see it through and win it for Peru.