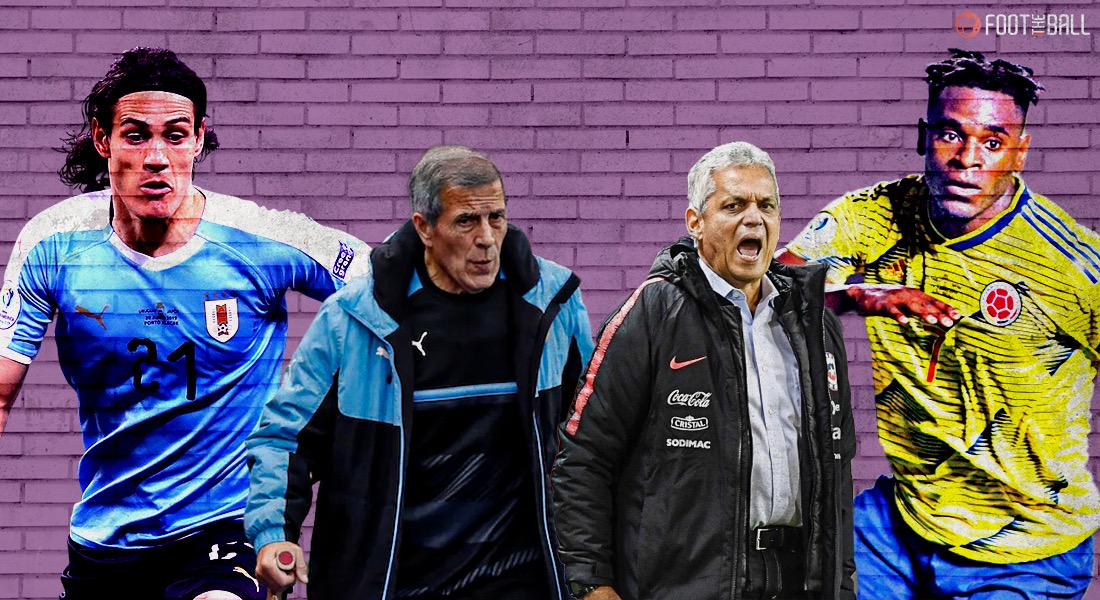 Heavyweights Uruguay are set to face a struggling Colombia in the third quarter-final fixture of the 2021 Copa America, in what looks like an interesting clash on Saturday at the Estadio Nacional Mane Garrincha in Brasilia.

La Celeste come into this game after what has been a mixed tournament for them so far. Their campaign started off on a negative note with a defeat against Argentina but they picked up their first points in a 1-1 draw against Chile, and that too with the help of an own goal from Arturo Vidal.

However, they bounced back with a 2-0 win over Bolivia on Thursday which secured them the qualification for the knockout stage and a 1-0 win against Paraguay on Monday has given them some confidence going into the quarters.

Meanwhile La Tricolor have had the opposite run of what Uruguay had in the group stage. Their tournament started off on a good note with a win over Ecuador, but soon, cracks started to appear in this Colombian side which is without their talisman James Rodriguez.

They held on to a draw after being down to 10 men in the game against Venezuela and were defeated by Peru in a 2-1 affair three days later. Needing confidence, they went into the game against Brazil with a full-strength squad and had been leading 1-0 until the 78th minute but soon succumbed to a 2-1 defeat when the Selecao scored in the 10th minute of injury time through Casemiro.

It is all good news in the Uruguayan camp as there are no new injury issues and with the squad having had a rest of five days, manager Oscar Tabarez will most probably bring back his star players into the line-up on Saturday. A full squad of 26 players is at Tabarez’s disposal which has a plethora of talent within it.

Similar to Uruguay, Reinaldo Rueda and Colombia will be happy that there are no new injury issues but are without Yairo Moreno who withdrew from the tournament after suffering a muscle injury during Colombia’s first game of the tournament. 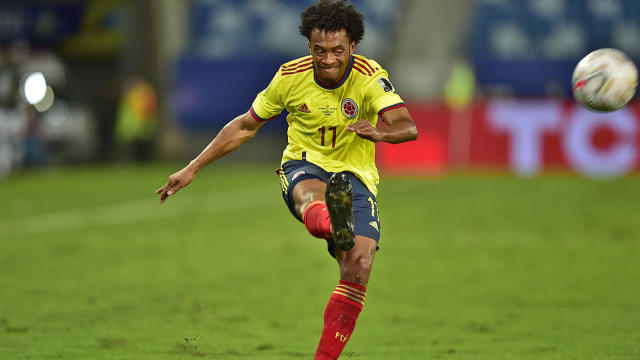 Juan Cuadrado will be a huge miss for Colombia on Saturday against Uruguay. (Image Courtesy: Copa America / Website)

However, star player Juan Cuadrado will miss out due to a one-game suspension after receiving two yellow cards in the group stage.

Uruguay are blessed with world-class centre-forwards in Luis Suarez and Edinson Cavani. After his exploits with Atletico Madrid in the La Liga, which saw them win the league title, Suarez was seen as the talisman of this Uruguayan side but after the second match against Chile, in which he scored a goal, he has been unimpressive with Cavani taking on the scoring responsibilities. 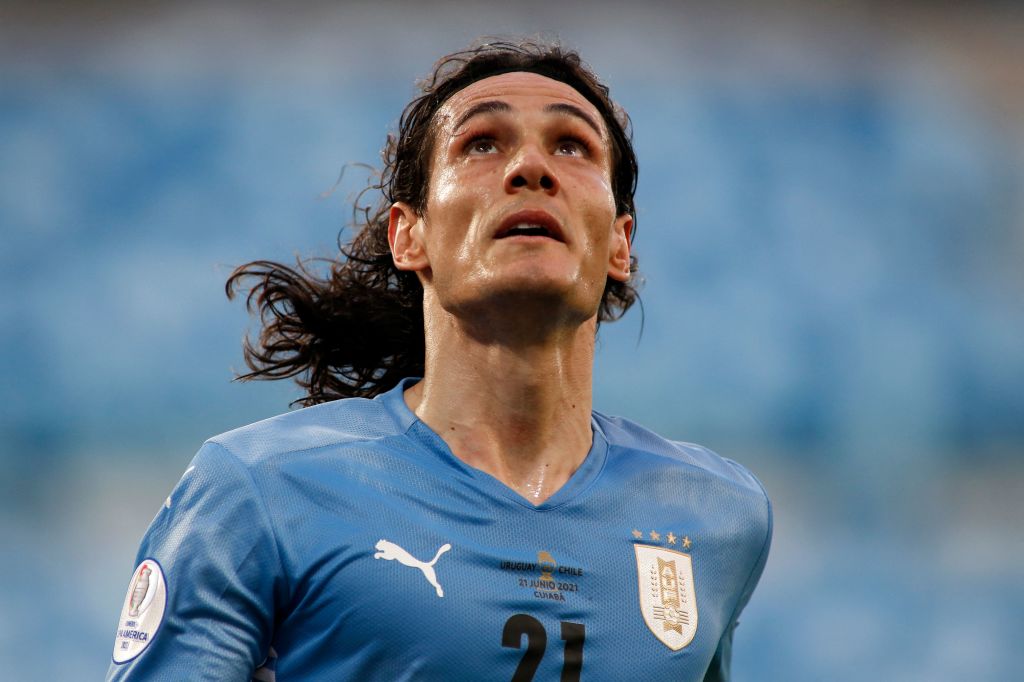 Fans will hope that Edinson Cavani will continue his rich scoring form for Uruguay on Saturday. (Image Courtesy: MARCA / Website)

In the two matches that Uruguay won in the group stage, it was the Manchester United striker who had opened the account for his side and is still bossing the green at the age of 34. Manager Oscar Tabarez will hope that this form of Cavani continues while he would also expect some support from his talented midfielders.

Until his suspension, most of Colombia’s chance creation depended upon Juan Cuadrado. With the Juventus man missing the quarterfinal, the mantle will fall on to various other attackers but the responsibility must be shouldered by Duvan Zapata who helped his Italian club Atalanta finish third in the Serie A, with 24 goal contributions under his belt. 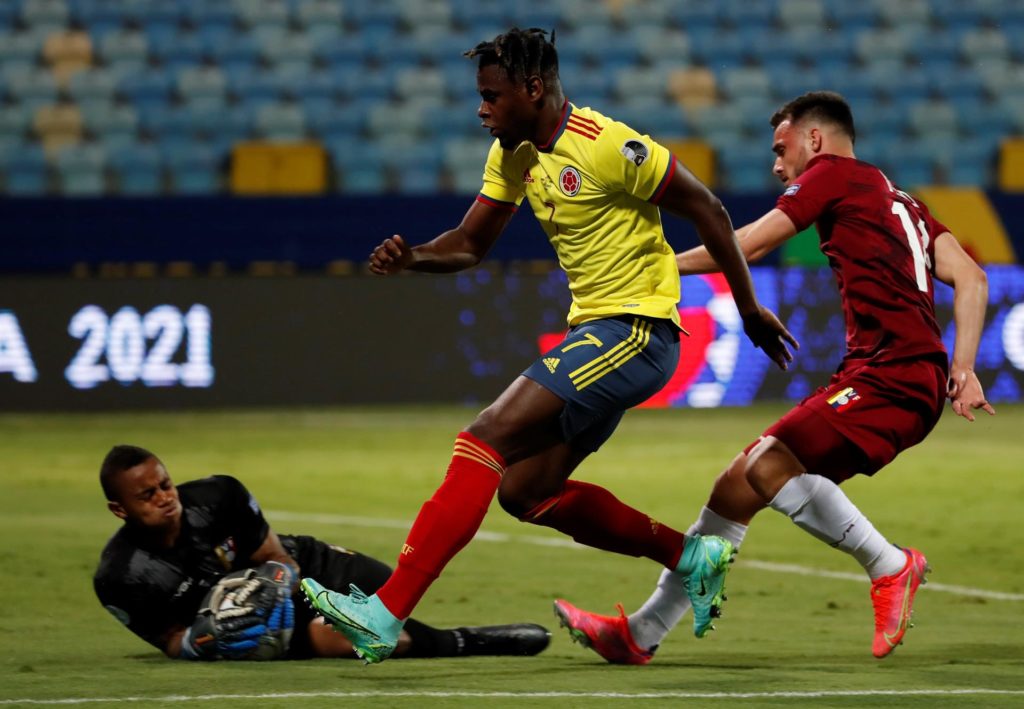 Duvan Zapata will be key for Colombia on Saturday against Uruguay. (Image Courtesy: Copa America / Website)

Apart from Zapata, Rueda will also hope that strikers Miguel Borje and Alfredo Morelos step up from the start or from the bench and help Colombia go into the semi-finals with a win-over Uruguay in the quarterfinal fixture.

Although both squads are filled with talent, Uruguay will have the upper hand for sure going into the game against Colombia as they look to bank on their winning streak.

Uruguay will want their attacking superstars to finish the job early while Colombia need to have the grit and determination and not make it easy for the La Celeste, hence, FootTheBall says, Uruguay 2-1 Colombia.