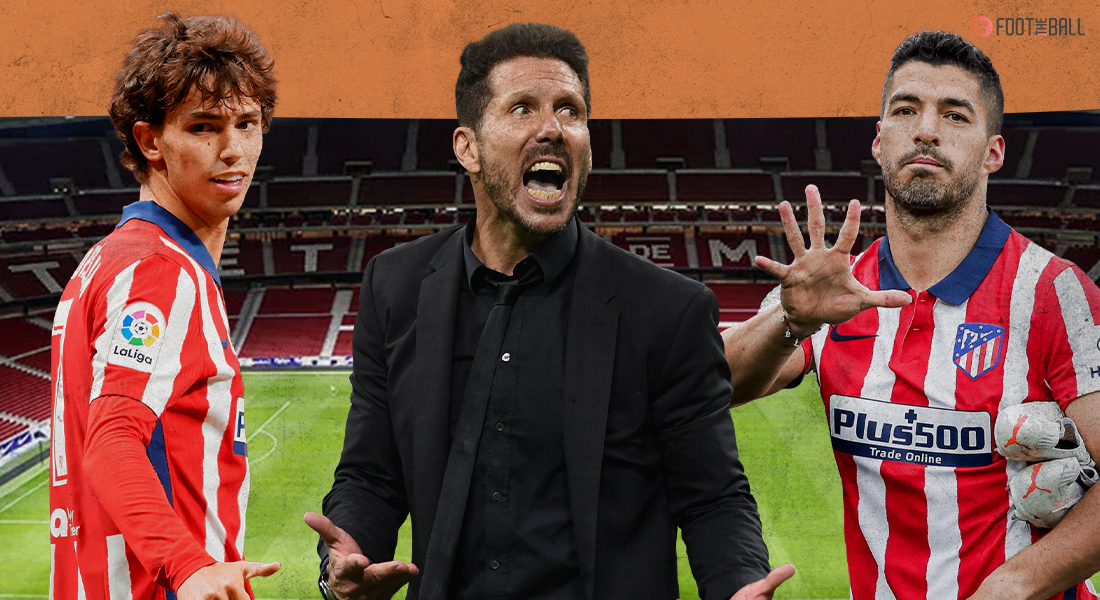 Last season, like in 2014, two wounded giants were struggling at the same time as is so unusual for them, the door was half-open for a third team to break the duopoly. But this does not mean stepping through it was easy. Atletico Madrid definitely belongs to Spain’s big three, but it is only because of Diego Pablo Simeone’s miraculous work that this is taken for granted today.

It is quite rare for Barcelona and Real Madrid to be sloppy, but one must earn merits to dethrone them. In the contest of consistency last season, Atletico were slightly less inconsistent than their rivals, but that’s what you need to claim the trophy. 86 points were the lowest a champion had needed since Madrid’s 85 in 2008, yet this also demonstrated that winning games is not as easy as it seems.

Following conquering La Liga last season, Diego Simeone and his men will attempt to do something that hasn’t been done at the club in 70 years — win back-to-back league titles. FootTheBall examines how the defending Spanish champions could fare next season, and whether Simeone and his players can achieve yet another La Liga title and cement their names in the Colchoneros’ history books.

Atletico Madrid winning LaLiga on the last matchday in excruciating but yet thrilling fashion. Simeone really is quite something, isn’t he? Coaches can only do so much at the end of the day but Cholo is a proof that there’re advantages of having a good one.⁣ ⁣

A disciplined manager known for his strategical interjects, Simeone expanded his horizons the most this season, both in tactics and educating. Recognizing the necessity to score goals, he often ditched his long-favoured 4-4-2 formation in favour of multiple back-3 variations. Fluid attacks, longer spells of possession, in-between-the-lines movements- 50 points in the first half was not only surreal but well-deserved.

Defensively, Simeone was innovative and adaptable as well. Atletico were seen utilising a range of defensive approaches, including high, medium, and low blocks, the latter especially while protecting a lead. When they applied a high press, their forwards jumped, triggering further lines of pressure.

Better offensive threat + adaptable defensive tactics, Atletico took the league so far before 2021 that even an exceptionally poor second half would only offer their rivals a mere sniff of a race, not the title. When it appeared like Cholo’s squad was running out of steam, with players getting injured or losing form, Llorente’s inventiveness, Carrasco’s rebirth, Correa’s movements, and Suarez’s clutch goals brought them closer to victory.

The two seasons before Diego Simeone joined Atletico, they finished 9th and 7th.

In his nine full seasons in charge, Atletico have never finished outside the top three, winning La Liga twice 🏆🏆👏 pic.twitter.com/JHjAFlmnNy

It is undeniable that the current Atletico Madrid side is not as good as the one from 2013/14, but Simeone appears to be an upgraded version of himself. Sharpened with time, perseverance, and consistency, and alive because of one motto- “Whatever happens in the club, you have to raise your hierarchical level”, El Cholo is a serious taskmaster day in, day out.

The defending La Liga champions already seem like a problem coming into the upcoming season with some newly added weapons, and one of them being Rodrigo De Paul.

Rodrigo De Paul didn’t need to sign with Atletico Madrid to look like a Cholo Simeone’s player. One of the best performers in Copa America and the assister for Angel Di Maria’s winner against Brazil in the final, not only is he a bargain at €35 million as the midfielder arrives at the peak of his powers at 27, the Argentinian and his new club also sound like a match made in heaven.

He looks to be most suited as both a high and deep-lying number 8, but he could be tailor-made for Atletico in a number of ways. The versatility the midfielder will bring in the middle of the park is unparalleled – whether as a very technical and forward-thinking double pivot alongside Koke, as an interior, as a playmaker behind the striker, or as a side midfielder tucking in.

He could be a significant upgrade to profiles as different as Saul and Thomas Lemar. A triangle on the right with Marcos Llorente and Kieran Trippier might also be very effective.

After all, as he demonstrated in Copa America, De Paul is capable of adapting to and enhancing all those around him. Such adaptability will surely be valued by Simeone, as undoubtedly will his perfect blend of talent and sacrifice. The addition of De Paul only adds to the talent Simeone has under his belt to work with.

The arrival of De Paul only strengthens this Atletico side, which already has some of the finest players in their positions.

History doesn’t look like history when one is living through it. Something similar to 2014 happened last season as well- Barca gifting their go-to-striker for pennies to a direct league rival. In both cases, Blaugranas gifted a goalscorer to Atletico Madrid and in both cases, they lost the league to them. If it was David Villa in 2014, it was Luis Suarez in 2021.

Atletico deserved to go to the Neptune Fountain to celebrate their title, and Josep Maria Bartomeu should have been there too. Following winning the La Liga title last season, Luis Suarez was in tears and no wonder why. No player gave a side more points in the last league campaign than him, with 21 points through 21 goals.

That triumph meant a lot to him, not just because of the evident difficulty of the feat, but also, as with any old-school striker, because of the underlying emotion of revenge. Following his bitter-sweet vengeance on his former club, the 34-year-old Uruguayan, with his predator instincts inside the box, will be aiming to do the same in the upcoming season.

Whether it’s Marcos Llorente, a versatile midfielder with 13 goals and 12 assists last season, or Koke, whose positional and technical mastery is unrivalled, or Jan Oblak, who has one of the most trustworthy sets of hands between the goalposts, The Colchoneros scream talent.

With players like Carrasco and Correa functioning as daggers on the flanks, Joao Felix serving as the connection between the midfield and attack, or the Gimenez-Hermoso-Savic defensive cover, Atletico Madrid were the team to beat last season, and will definitely be the team to beat this upcoming season.

THE OTHER SPANISH GIANTS DOWN BAD

While Atletico Madrid can easily win the award for the best-run club in La Liga, alongside Real Sociedad, Real Madrid and Barcelona have been mired in a whirlwind of financial debt and controversies.

Breaking: Lionel Messi — the highest paid athlete in pro sports history — has taken a 50% pay cut in a new 5-yr deal with @FCBarcelona.

His new ~$84M annual salary is still the highest in sports.

Both the Spanish giants are struggling financially as their wage bills spiral out of control, with both the clubs trying to offload their players. While Barcelona tries to convince its players to take pay cuts in order to register their low-cost signings and adjust the wage bill, Los Blancos have been letting players like Sergio Ramos walk, with his defensive comrade, Varane, reportedly also on his way out.

I never thought this day would come, but everything has a beginning and an end. pic.twitter.com/B4IlwQ4pBJ

With both sides attempting to find harmony in their respective locker rooms, Atletico Madrid will be aiming to capitalise on these setbacks that have engulfed the two titans and complete their quest for back-to-back La Liga crowns next season. Of course, these financial setbacks don’t make Barcelona and Real Madrid any less formidable or capable of dethroning Atletico, but the ball is in Colchoneros’ court for the time being.