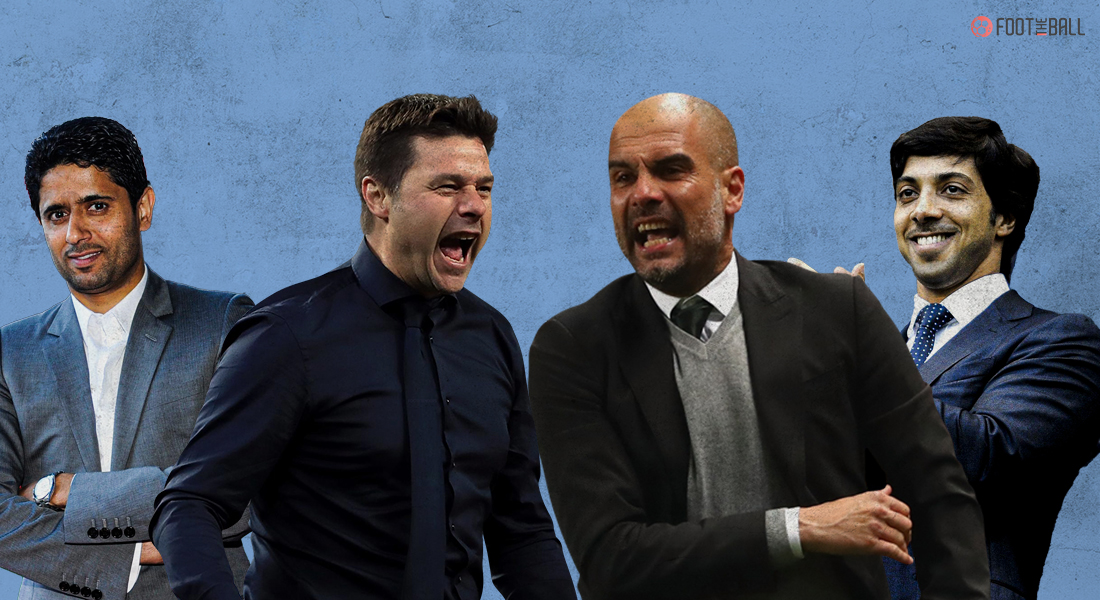 WHAT IS SPORTSWASHING? MANCHESTER CITY VS PSG CLASH RESURFACES UNCOMFORTABLE QUESTIONS IN LIGHT OF SUPER LEAGUE

In 2011-12, neither PSG nor Manchester City made the knockout phases in the Champions League. PSG in fact did not even qualify for the group stages having finished fourth in the Ligue 1 in 2011. A decade on, a semifinal berth seems like the minimum that each team should be receiving, anything less deeming the entire season a failure.

In a week where there has been much debate over what the purpose of a football club is, PSG and Manchester City have been oddly sidelined. PSG were not a part of the 12 breakaway clubs of the European Super League while City were the first team to officially pull out. It has given their owners somewhat of a higher moral ground but the semifinal clash between the two teams later today has once again brought uncomfortable questions to the fore.

The two clubs are owned not by individuals or corporates, but rather by entire states itself. PSG are owned by Qatar Sports Investments while Man City are owned by the City Football Group.

Both these organizations represent entire states – Qatar and United Arab Emirates respectively. These are two countries that have severely questionable human rights records and the charge of their investments in sports is often called sportswashing.

Sportswashing refers to insensitizing the general public to a state’s atrocities because of their connection with sports. The logic behind it is that if you associate yourself with sports, over time people will forget that you are also responsible for committing human rights crimes.

Does sportswashing work? It is difficult to assume either way. It certainly does make people associate individuals for the club, like Sheikh Mansour with Manchester City. Whether that same train of thought extends to states is a more tenuous link.

Several individuals have made statements along the lines of PSG and City’s takeovers signified an inevitable move towards the European Super League. That, again, is a bit of a stretch. It is however part of a broader conversation over what the role of football clubs is in society.

Corporate owners like the Glazers at Manchester United and Kroenkes at Arsenal, believe a club is no different from a business. It should turn as much profits as it can irrespective of performances on the field.

I see the CL semis are going to lead to another wave of petrostate sportswashing discourse, so all I'll say for now is: agree or not, it's a valid critique. Everyone saying it isn't just "jealous" or "out to get City" or whatever. People are allowed to have that conversation.

However, football clubs, especially successful ones, rarely turn a profit. Just ask Real Madrid and Barcelona whose recent success has been built on unsustainable debt and in the face of the consequences of this financial mismanagement, the Super League was a way out.

PSG and Man City understand this aspect of running a football club. Losses to the owners do not matter. The incurred loss is no more than a drop in the ocean. Their owners have pumped in money, unsustainably so, circumventing Financial Fair Play rules to make sure there is on-field success. Why? Because sportswashing does not work without trophies.

WHICH ONE IS WORSE?

There really is no right answer. There is no state in the world which is free of human rights violations. It is convenient to blame Qatar and UAE as theirs are fairly recent or ongoing. However, the same logic can also be extended to most corporate owners from America. Amazon has received broadcasting rights of some Premier League matches and it has several violations against its name, including denying their workers bathroom breaks.

"In many ways, it’s a form of sportswashing as stealthy and cynical as any nation-state could dream up. Like any large corporation trying to monetise your love of football, Amazon is not doing this for love of the game."

I'm sure we'll keep coming back to these words. Brilliant! https://t.co/b55wQ11iKK

The line to deem what level of exploitation is acceptable is arbitrary and cannot be determined by one individual or institution. What then for football and sport in general? Does it merely become a vessel for vested interests that take the game increasingly away from its origins and supporters? Is it doomed to become a cog in the capitalist machine?

Not quite. Fans, and players, showed last week that they can force clubs to go the way they want if they come together. Therein lies a big problem. If football needs to change then it must unite. However, by its nature football is rife with bipartisanship. No longer that the dust had settled on the ESL that fans were back to bickering on twitter – this time on whose owners were worse.

The hope for football is though that there are actionable solutions that have worked. The Bundesliga has maintained a high standard and remained competitive despite clubs being fan-owned in the majority. AFC Wimbledon is another fan-owned club in England, formed out-of-spite after Wimbledon decided to move to Milton Keynes and become MK Dons.

18 years after reforming in the Combined Counties league, AFC Wimbledon are home 💛💙

Last year, we spoke to the club about the merits of fan ownership and their long, hard fought journey to return to Plough Lane pic.twitter.com/j8uHfhuT7H

Moving to such a system would require action on part of administrations and leagues. It is highly unlikely that top leagues like the Premier League would want to say goodbye to the sweet corporate commercial money that flows in because of the brand building undertaken by the richer owners. It then becomes somewhat of a conflict between the local fan and the global fan.

Once more, fans pitted against each other.

There is no straight solution but it is beyond debate that football is being used for purposes it wasn’t meant to be. PSG and City were showpieces of this argument until Florentino Perez chose to take on the role of Prima Donna. However, just because a bigger problem emerged does not mean that the old one has been solved. When the two sides clash on Wednesday night, there are bigger roles at play and we must not forget them irrespective of how fancy Neymar’s flicks are or the accuracy of Kevin de Bruyne’s crosses.