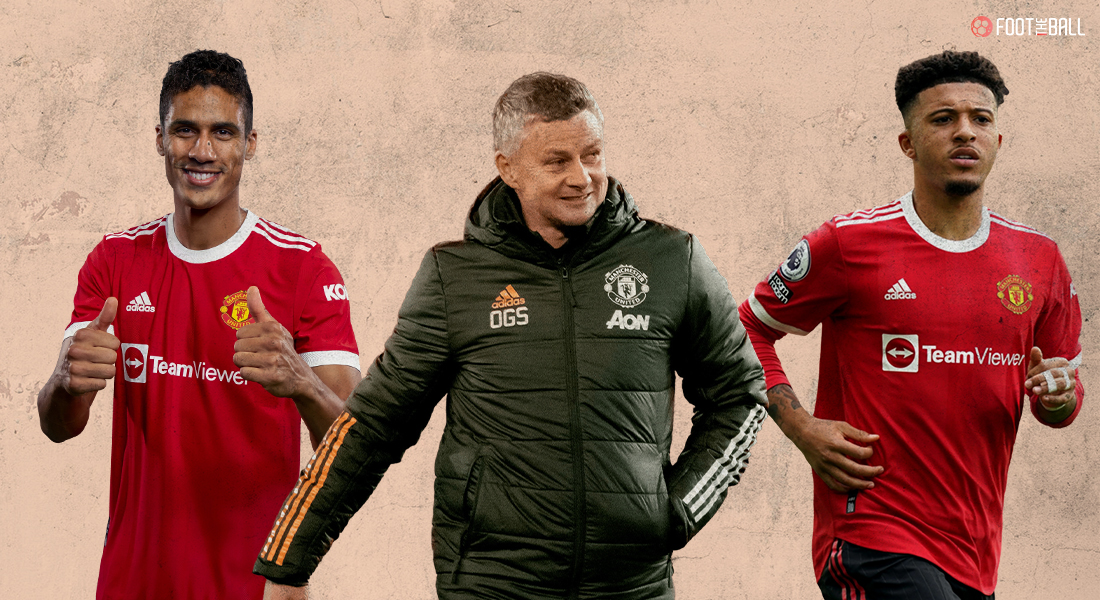 Manchester United picked up a much needed win over an abject Spurs side last night. They moved up to fifth in the standings but that is not the most striking part of yesterday. It is the fact that Ole Gunnar Solskjaer started with a back three of Harry Maguire, Victor Lindelof and Raphael Varane with Luke Shaw and Aaron Wan-Bissaka as the wingbacks.

Back three switch understandable to counter last week's result but also an admission of defeat and regression. Solskjaer reserved that formation for the elite in his first full season and then PSG and Leipzig last season. Now he's returned to it at Spurs. #mufc

This meant that Edinson Cavani and Cristiano Ronaldo featured together in attack for the first time. The switch in tactics, coming on the back of the embarrassing defeat against Liverpool, was seen in many quarters as reactionary and possibly influenced by Antonio Conte’s name being strongly linked to the Old Trafford job.

I remember Conte changed formation at #CFC and it worked for him. I think 3-5-2 needs to stay for Solskjaer. Apologies to the likes of Rashford, Sancho and Greenwood. #MUFC

Nevertheless, the job was done, three points in the bag and Solskjaer will likely implement the system more as the season goes on. However, the success against Spurs throws up more questions than answers especially given who all were left out and who all played.

MILLIONS ON THE BENCH

The most obvious criticism of the 3-5-2 or the 3-4-1-2 is the suitability of players in the squad with the ones who played in the specific positions. Shaw and Wan-Bissaka’s roles as wingbacks are pretty much self-explanatory, given they provide expert defensive protection even when going forward.

Of course, they do not offer too much explosiveness in attack while Wan-Bissaka’s crossing leaves a lot to be desired at times. Shaw, on the other hand, was caught out a couple of times by Lucas Moura and Harry Kane, needing the help of the centre-backs to clear the danger. This is where the complications come in, when one considers who all will be missing out in this formation.

Rashford, Sancho, Martial, Greenwood and Cavani all fighting for just ONE starting spot alongside Ronaldo. What happens to £75m new signing Sancho?

Going to be difficult for Solskjaer to stick with this 3-5-2 formation as it'll leave many players frustrated. #mufc

Jadon Sancho, signed for 74m pounds this summer after a chase of two years, has spent the entirety of the past two games on the bench. The supremely talented winger who has had a tough start to life back in England, now faces the prospect of even fewer starts in the future. Should then United have gone after a player who will not have a defined role in the lineup?

Sancho’s role in tracking back and doing the defensive work is of course not the same as the current fullbacks’. This is one of the key problems with success using different tactics, what happens to the others? There are legitimate fears that if Solskjaer sticks with this system, Sancho’s career might be stalled considerably.

Nine potential players for just three places which is a really tough call for OGS to make. I can't see this lasting even if he wins with it.

Speaking of stalled careers, what does Donny Van de Beek have to do to get minutes out there? The Dutchman has had almost no action since the start of the season, and even in games where his need has been felt, Solskjaer has gone to Jesse Lingard first. That makes Van de Beek’s acquisition even more curious, and with Bruno Fernandes locking down the attacking midfield spot while the partnership of Fred-Scott McTominay are the pivot, where will he play?

I'm sorry but you cannot spend over a year desperately chasing Jadon Sancho and then get to this point so quickly. That's just basic failure of recruitment and management. https://t.co/yaPbkM8rbW

The fact that United have an overload of superstars in the same position might just force him to leave the club in January.

IS THIS THE WAY FORWARD?

Both Cavani and Ronaldo scored, but the thing is- there are no more genuine forwards in the team. Marcus Rashford and Mason Greenwood are wide attackers who like to come inside before shooting. That is why using either of them will most likely leave the man furthest up top isolated once again. Incidentally, neither Rashford or Greenwood will be able to play regularly in the new system as due to the same problem with Sancho- reduced protection for the backline.

Only one man left doing his runs with a coach – poor Donny van de Beek. 🇳🇱

Penny for the thoughts of the £35m signing that can’t get into a midfield that played like that today… pic.twitter.com/ey7asv55ZL

That is why sticking with this system is more problematic and solution-based. Victor Lindelof was obviously happy with the back three, given how he was being left out as the third centre back in 4-2-3-1. However, Solskjaer simply does not have the adequate number of players to continue this for too long.

Unless he converts all three of the wide attackers mentioned above into full backs and instill in them a lot of defensive nous to upseat Shaw/Wan-Bissaka. Again, a distinct improbability given how much faith Solskjaer has in the current duo.

🗣 "Leaving Sancho, Greenwood and Rashford on the bench is not the plan."@GNev2 says the current Man United selection and formation was not initially Ole's plan pic.twitter.com/VzxhVBADXV

The exact changes to them will be Alex Telles and Diogo Dalot who have been less than impressive this season, combined with their less minutes. The fact that Solskjaer was forced to do something he would not have in the first place just goes to show the amount of pressure he is under.

Paul Pogba is another name who can expect to miss out for some time in this new setup. He has been most effective from the left when Rashford was out injured and for France, he plays in behind the striker as the creative hub.

Real Madrid are looking closely at Paul Pogba and are far more confident of securing his services than they were a couple of months ago. Mino Raiola is no longer seen as a potential issue in a deal being done. [@jfelixdiaz, @marca] #mufc

Both those places are filled and he has been proven less than effective as a holding midfielder. With his future up in the air, it is looking more and more likely that Pogba will be leaving for free next year.

Spurs were extremely disappointing last night, and the backline was not adequately tested. A few times they were caught napping by the runners in behind while during set-pieces, the defenders did lose out on a few duels. There will be far tougher opponents on the horizon (Atalanta and Manchester City are the immediate opponents) who will no doubt raise more questions of this new setting.

How many points will they pick up out of 15? pic.twitter.com/hpFZx5IRsF

The noise from inside the squad itself though, maybe the loudest of the lot.