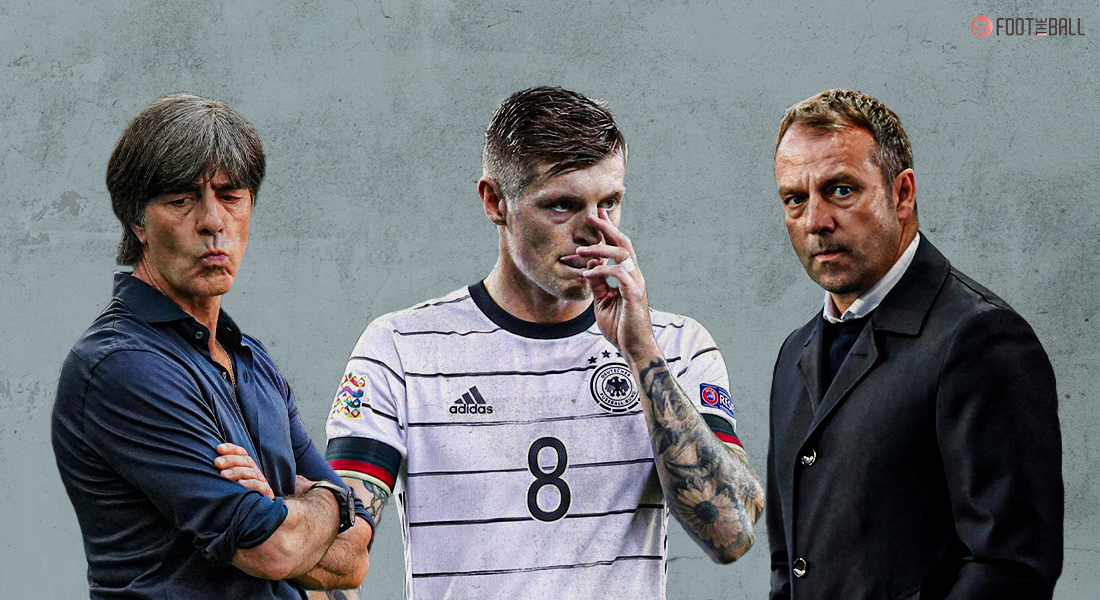 It was being heavily speculated ever since Germany’s exit, but it still comes as a shock. More so because the World Cup qualifiers get underway later this year with the 2022 World Cup in Qatar 18 months away. This news is a real head scratcher for football fans.

FALLING FOR A WHILE

There is no getting around one simple fact- Germany have been performing terribly for some time now. Fans point out to the 2018 World Cup, from where their downfall started. The defending champions failed to make it out of their group, comprising Mexico, Sweden, and South Korea. Only a magical free-kick from Kroos against the Swedes saved imminent disaster on match-day two after an opening day loss to the Mexicans.

But after missing a bucket load of chances and letting in two late goals, their second loss against the Koreans sealed a very premature exit. Two losses to the Netherlands and France in the inaugural UEFA Nations League had relegated them to League B. Only a format change saved them that ignominy. However, more draws and a 6-0 thumping at the hands of Spain towards the end of 2020 pretty much made sure that Germany was no longer a top team.

That fact was further solidified as they lost a World Cup qualifying match to minnows North Macedonia in March, the same month Loew’s decision to leave was announced. With no outward hope of big performances expected at Euro 2020, Germany slumped through their group with poor performances against France and Hungary. That did not improve in their knockout tie, with recalled veteran Thomas Muller missing a gilt-edge chance to equalise when down 1-0.

Another of the recalled players, Mats Hummels had already scored an own goal in the defeat to Les Bleus. New manager Hansi Flick is set to take charge of the national team soon, and Kroos saw his chance to jump ship rather than wait for the push.

Former Bayern Munich boss Flick is likely to bring in his own players, and give younger players more game-time. 18-year-old Leverkusen midfielder Florian Wirtz is one of the first names that comes to mind as he had a fine U-21 Euros which Germany won.

Florian Wirtz now has 7 Bundesliga goal involvements (3 ⚽️ & 4 🅰️) this season – that's more than all other players aged 17 or younger across the top 5 European leagues combined (6).

Others like Julian Brandt, Nadiem Amiri, Mahmoud Dahoud are players in the mold of Kroos who will feature regularly after the retirement of Kroos. Furthermore, Kroos’ relationship with Loew was well-known as he only stayed with the team after the debacle of 2018 due to his affection for the boss.

The Bayern Munich boss will take over the national team after #EURO2020. pic.twitter.com/QH8OFdWDRZ

How he might have gelled with a new coach whom he had never worked with before, and in the background of the recent poor performances is anybody’s guess. When you play your entire international career under one man, it is hard to adjust to somebody else, and Kroos might just have taken this decision in order to focus on his club performances. Even though Flick’s style of play does seem to promise a lot more winning and quick attacks, Kroos clearly felt that this was the right time to go.

On the flip side of all that is the undercurrent of emotions that concur that he should have stayed till the World Cup. Indeed, Kroos, with 106 caps, is one of the most elite passers in the game and a chances creator who is renowned for controlling the tempo of the game.

🗣️ "Real Madrid games always follow Toni Kroos' rhythm. If he wants the team to slow down, we slow down. If he wants us to speed up, we speed up. He decides everything."

His ability to influence the creativity of a team cannot be questioned, and at just 31-years-old, he is still at the peak of his powers.

Did he see the writing on the wall? After the 2018 World Cup, Loew banished Muller, Hummels, and Jerome Boateng while Mesut Ozil retired in the most acrimonious of circumstances. It is hard to see Flick doing the same with Kroos, but his minutes would have surely seen a reduction.

🇩🇪 @ToniKroos has announced his retirement from international football

💫 The 2014 #WorldCup winner produced some special moments on the biggest stage for @DFB_Team_EN pic.twitter.com/ikeejAhrkl

Nevertheless, his presence with the squad would have been a big influence on the youngsters coming through and strengthening a weak German team before Qatar. Kroos’ numbers suggest he had himself a fine tournament this time around as well. He completed the most passes (100) by a player against France, being the best passer (96%) against Portugal, and creating the most chances (4) against Hungary.

There is nothing to suggest that those numbers would have suddenly dropped if he continued playing. Another reason for his early retirement could be the lack of faith in Germany’s strikers, who are having a tough time scoring. His professionalism and commitment to the team cannot be questioned but this decision, while respected worldwide could just have easily not come so soon.