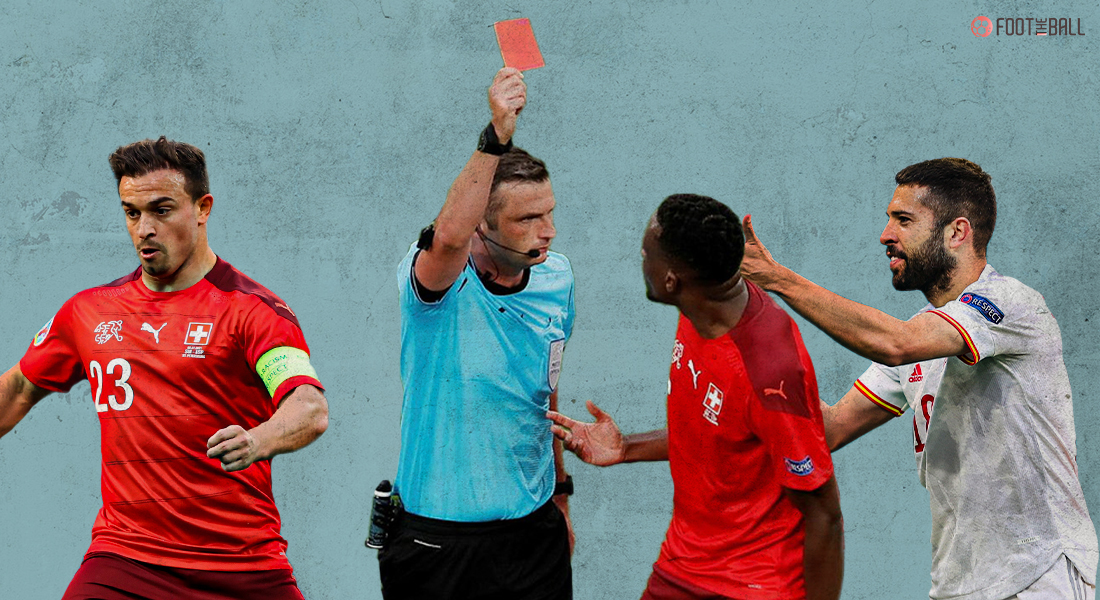 Switzerland and Spain locked horns at the Gazprom Arena in Saint Petersburg, Russia with a ticket to the semi-final awaiting the winners of this encounter.

The opening exchanges saw Spain dominate possession as the Swiss players played on the backfoot, hoping to capitalise on any misplaced pass. And that’s exactly what was taking place as Switzerland launched some early counter attacks but with no success.

The first breakthrough came early in favour of La Roja, when the ball from a Spanish corner fell to Jordi Alba outside the Swiss box, who smashed it the first time. . The off-target shot was deflected by Zakaria, who was replacing a suspended Granit Xhaka, leaving Sommer wrong-footed with the ball ending in the back of the net.

Following the opening goal, Spain continued to play with a high backline, dominating possession and looking threatening heading forward, exploiting spaces with exquisite passing and movement. The Swiss suffered another unfortunate setback when Breel Embolo was injured and replaced by Ruben Vargas.

From the set pieces, Luis Enrique’s side were looking menacing, as another corner found Azpilicueta unmarked in the Swiss penalty box, with him heading right into Sommer’s gloves. Switzerland had no real chances to equalise, but they were defending valiantly, winning back the ball on several occasions, as Spain looked sluggish in possession as halftime approached. As the half-time whistle blew, the score remained 1-0 in favour of Luis Enrique’s men.

🇨🇭 🇪🇸 Zakaria's own goal separates the teams at the break…

Spain introduced Dani Olmo, who replaced Pablo Sarabia before the start of the second half, in what appeared to be a tactical switch by Luis Enrique. And Spain almost capitalised on that tactical change in the opening minute of the second half, when a cross from Morata found Olmo in acres of space, only to disappoint with a feeble effort right into Sommer’s hands.

Switzerland appeared to be an entirely different side in the first ten minutes of the second period, attacking with ferocity. Zakaria nearly made amends as his weak header from a Swiss corner went just past the post. The Swiss looked dangerous surging forward, and nearly equalised when Vargas did well  on the left, poking it through to Zuber at an angle who stretched for it under pressure from two Spain defenders,

Switzerland eventually found their equalizer after a defensive blunder by the two Spanish centre-backs found Freuler, whose slide-pass was rolled in by Shaqiri into the bottom left corner for 1-1.

🇨🇭 Shaqiri slides the ball into the corner and Switzerland are back in the game! 👊#EURO2020 https://t.co/dhQ5fakspx pic.twitter.com/MTfZjiX45A

As things appeared to be moving in the Swiss’ favour, they rapidly deteriorated. Freuler was shown the red card for his rough tackle on Gerard Moreno. VAR had a quick look, but the referee’s decision was irrevocable. Switzerland appeared demoralised following the major decision, whilst Spain appeared to capitulate. They got dangerously near after Gerard Moreno’s attempt from outside the box went straight into Sommer’s clutches as the full time neared.

A slew of substitutions in the second half from Luis Enrique didn’t help Spain in the regular period, as the referee blew for the end of the second half, sending both sides into extra time.

Spain looked threatening going forward as the first half of extra time commenced, trying to capitalise on their man advantage. They came dangerously near when Alba sent a beautiful cross from the left to Moreno, who was six yards out, but he got too much on it and deflected it wide. Jordi Alba was trying to do it all as his venomous shot minutes later from outside the box was tipped by Sommer over the bar.

Spain truly looked like they were a man up as they were dominating the possession, surging forward with all their mite to find that one decisive goal. But the Swiss wall stood in their way, as Moreno’s point-blank shot was brilliantly stopped by Sommer. The goalie appeared to be having the game of his career as a minute later he produced another spectacular save from a left-footed effort by Oyarzabal, keeping his country in the game.

There were 11 shots from Spain in that first half of extra time, but Sommer didn’t let any of them go past him. As the second half began, it was the same storyline, with Switzerland on the back foot, defending with all their strength, and Spain attempting to find a winner.

Alba’s yet another excellent cross found Llorente, whose left-footed effort was superbly stopped by Rodriguez, keeping his country in the game. As the conclusion of the extra time period approached, the Spanish offensive onslaught persisted but with no end results.

Sommer added another save to his stellar performance, as Gerard Moreno’s effort was easily saved by him with the game set to be decided on penalties as a nerve-wracking 120 minutes came to an end.

Switzerland gave it their best until the last whistle, but couldn’t recreate their exploits from the quarter-finals, losing 3-1 in the penalty shootout to Spain, who are heading to the Euro 2020 semi-finals.

THE SWISS WIN THE HEARTS

A nation divided by culture, customs and language was brought together by the universal joy that Vladimir Petkovic’s men brought to the country. For the first time since 1954, Switzerland qualified for the QFs of a major tournament and they did it in some fashion, after knocking off world champions France in penalties. ⁣

They might have lost today, but they gave it their all till the final whistle, being one man down. Brilliant individual displays combined with defensive tenacity at the back saw them take the game to extra time. They impressed the whole footballing world with their incredible performance throughout the tournament. It’s beyond belief to see such a small country with 8.5M people producing so many heroes at the same time at the biggest stage of all.

Despite the Spanish win, Yann Sommer was the man who stole all the spotlights with his brilliant display today. Pulling out saves from the top drawer and keeping his nation in the game till the last breath. The match was dominated by Spain, but his heroics overshadowed Luis Enrique’s men.

🇨🇭 A tournament to remember for Sommer & Switzerland. They can be immensely proud 👏👏👏#EURO2020 pic.twitter.com/tuuUjqkiSN

He carried his superpowers into this game after a spectacular performance against France, putting on a show for the spectators in the stadium. Tonight, the 32-year-old made 10 saves, and it wasn’t his fault that Switzerland lost on penalties, as they only converted one of the four taken. With Switzerland and him heading home, they can check out with their head held high.

Spain are headed to the semi-finals of Euro 2020, but they didn’t really impress today. A very lateral squad. There appears to be a clear directive to circulate the ball via the wings while avoiding passing into the inside zones. It’s as if there’s a fear of being evicted in the centre, so Spain ends up moving in a U shape.

🇪🇸 Spain will play Belgium or Italy for a place in the #EURO2020 final!

They may be heading to the semifinals but for how long can they rely on their good fortune? They live and breathe possession football, yet they have been sluggish and lethargic in keeping possession and controlling matches through it. They will now play a strong team in either Belgium or Italy, so there will be no room for error for the Spaniards.