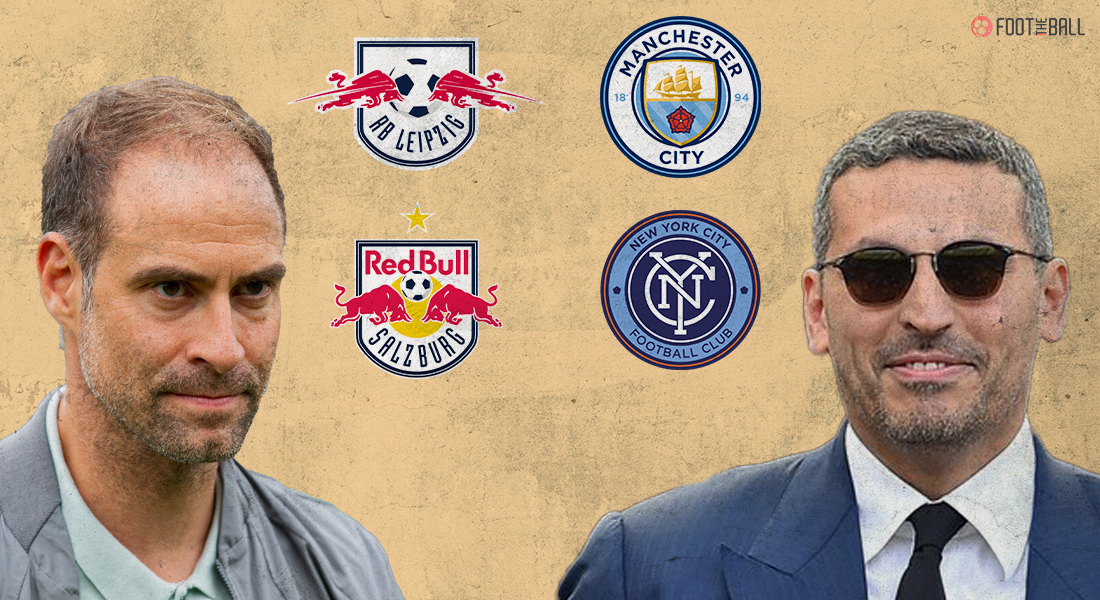 Most football fans around the world are familiar with the term “farmers league.” It is where there are one or at most two top-tier clubs who win everything on offer and are almost indomitable. This phenomenon keeps repeating every season as the smaller clubs do not have the means to challenge.

As opposed to this, there is something else which fans may not be too aware of. The concept of “farm teams.” It is not where your local club grows poultry or helps out in agriculture, but rather when one giant corporation/group of investors control many clubs across the globe. FootTheBall brings to you the lowdown on farm teams and why they are not all good.

First things first, let’s look at all the good that farm teams do or are aiming to achieve. Take the examples of the two biggest in the business right now: the Red Bull GmBH and the Abu Dhabi-led City Football Group (CFG). Both have one main team which represents their most valuable investment: RB Leipzig and Manchester City respectively.

🔟 players have moved from Red Bull Salzburg to RB Leipzig since 2015. pic.twitter.com/t7I1G5sCOi

Furthermore, they also have ‘sister clubs’ or “farm teams” which have the same backers. Immediately, the most important benefit is obvious: there is no fear of bankruptcy or liquidation for the smaller teams. The stability this ensures helps in formulating future direction in a much more consolidated manner.

Moving on to the footballing aspects of it all, it is no big secret that the farm teams serve as feeder clubs to the big fish. RB Salzburg has given as many as 18 first-team players to Leipzig, and by “given,” we mean the transfer fee is at an extremely discounted rate. Benjamin Sesko recently added his name to the list.

Manchester City do not need players from their farm teams but they have often loaned out players. Girona in La Liga and Melbourne City in Australian league have benefitted greatly from such an arrangement.

That is where the second benefit comes in: game time and professional experience. Youth graduates and teenage talents can ply their trade in a less competitive environment which helps them develop in an all-round manner. They can also play regularly which helps in the short and long-term. Even coaches communicate on a regular basis to remain updated on the progress of players and even gauge out future talents.

They have also developed world-class facilities for scouting, training, and identifying the next generation of players. Their widespread network helps in recruiting from an early age and gaining loyalty which ensures that other teams cannot compete. That sets them up nicely for building up a good base which provides a long line of players that can grow up to be even better.

CFG have also invested in the ‘Right To Dream Academy’ in Ghana which is one of the most famous names on the continent for budding footballers. This kind of planning is crucial in today’s day and age of global football.

However, what this expansion also means is that a lot of the “pipeline” upcoming players are controlled by a select few. Never mind the members of Manchester City who are beyond the reach of most, the rest of the clubs under CFG can be fair targets.

Due to the nature of farm teams, CFG will have a controlling say with regards to what price they want to sell or even to whom they want to. The same goes for Red Bull. Their strategy of Salzburg players going to Leipzig is something that is very much a fabric of both the clubs. Since the transaction is between two teams with the same parent company, the price is really not a factor. By now, the “RB Chain” is pretty much settled. The cream of the crop at FC Liefering, another RB-affiliated team in the Austrian 2nd division, goes to RB Salzburg. The cream of Salzburg then goes to RB Leipzig and so on.

CFG already held talks with one Russian club in February.

The main income is the profit Leipzig, and RB as a whole, make after selling the finished product to a new club at a much higher rate. Furthermore, the fact that these groups have plans to buy more traditional teams and turn them into farm teams reduces the competition in those respective leagues. The other big and small teams cannot get access to the emerging players if they are already contracted to an academy overseen by Red Bull or CFG.

The future of football?

The chances of an underdog springing up a surprise are diminishing rapidly nowadays. Without the involvement of national associations, it does not look that this kind of expansion will be stoppable. It is not only about the competition that has been reduced but also the chances of more clubs getting their hands on prospects.

That eschews future plans as the big corporations will continue to enjoy the monopoly. The Glazers or the Kroenkes or individual owners cannot go on buying multiple teams. That is why it is imperative that the governing bodies and federations come together in order to make a more level playing field.