THE OLYMPIANS TO WATCH🥇 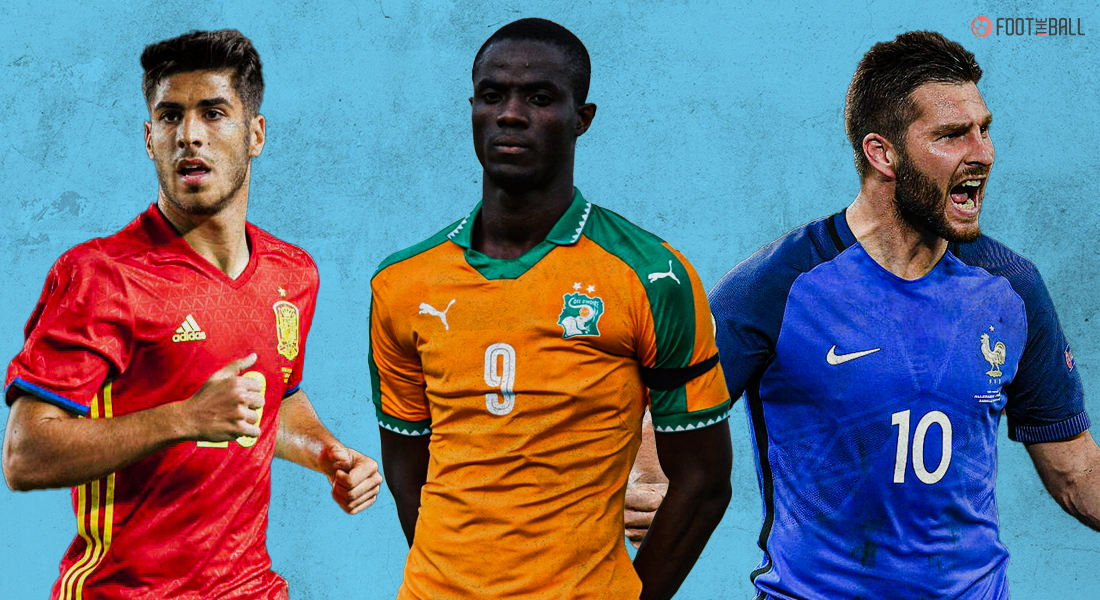 The perfect closing ceremony for a jam-packed season of football, the 2021 Tokyo Olympics will prove to be the perfect dessert for football fans.

A place for youngsters to showcase their talent and experienced campaigners to revamp their careers, the Tokyo Olympics is a jaw-dropping event. We at FootTheBall take a look at the 10 players who could change the scenario for their teams in the Tokyo Olympics and the players on whom the world will have eyes this summer.

A name synonymous with magnificent World Cup outings, Ochoa has given nightmares to the best of world football’s striking battery. Ochoa quickly cemented himself as his club’s No. 1, but it took a series of miracles versus Brazil to garner a way into the hearts of the Mexican spectators. Mexico’s spiderman in goal, people started believing Ochoa had 6 fingers because of some unknown rumours.

But surely the Mexican does have 6 invisible hands that help him replicate his goalkeeping idol, Peter Schmeichel’s heroics every time he plays for El Tri. When the shot-stopper guards Mexico’s post this summer a frustrating evening for the strikers is inevitable. Knocking on the category of “The Greatest South American keeper of all time”, an Olympic medal for Mexico could surely seal the deal for Ochoa.

His leadership abilities were on display, as he did not hesitate to command the team’s backline and was loud throughout the operation. He also made use of the opportunity when the Catalans stormed ahead, penetrating the opponent’s goalmouth on multiple stages. His self-assurance is constant, and his attacking prowess hid Gerard Pique’s absence whenever Lionel Messi and company prepared for set-pieces. He isn’t the fastest player, but his excellent placement, power, and toughness more than compensate for it while going past the defender without being eaten up seems a challenging task for Mingueza’s rivals.

Los Blanco’s bench-warmer, Marco Asensio could be licking his lips when he dons the Spanish jersey in Tokyo this summer. A left-footed sensation Asensio burst onto the scene after a handful of jaw-dropping strikes to leave the opposition’s keepers rooted to their spots. But a sudden decline in form saw Asensio starting on the bench rather than in the eleven.

Although the Tokyo Olympics could be a minute of fortune Asensio would have been praying for. The leading-lady in La Furia Roja’s eleven, Asensio’s knack of shuffling inside and whipping rockets for fun could rattle oppositions’ this summer. 2021 Renato Sanches’ barter with the 2016 Renato Sanches, helped the Portuguese midfielder earn a few acknowledgements in this Euro. For Asensio, the storyline is already written; he just needs to understand the role of the protagonist in his chronicle.

A name that needs no introduction, Dani Alves sits at the pinnacle of world football. Boasting of a jaw-dropping trophy cabinet, Alves’ hunger for silverware hasn’t ended. The last trophy with the Selecao came in 2018 when the veteran defender conquered South America. While Brazil awaits La Albiceleste’s challenge this weekend, Alves will be gearing up for an Olympic hurdle. Ask a Barcelona fan about Alves’ contribution at Nou Camp and he’ll slowly whisper the word “Greatest Right-Back ever.”

When Selecao began their throne retention in Tokyo, Alves would be solitary Selecao leading the Brazilian hunt. The pack of youngsters require an experienced number to glue them together, something which Alves is capable of. He could pinch the rivals with his dynamic defending and the knack of scoring crucial and ravishing goals. And there’s no word to describe his vision which Lionel Messi is well aware of. The Greatest Brazilian full-back must be enthralling for the Tokyo task lying in front of him.

Arnold is a midfielder that does not necessarily get his due portion of attention yet he is one of The Wolve’s top and consistent performers. The primary role of the German playmaker is controlling and commanding the centre of the pitch while sometimes drifting on the left flank. Arnold is in charge of driving his team ahead into the Tokyo Olympics with his capacity to accomplish critical flicks and accurate free kicks.

Arnold’s capacity to identify openings to collect and gallop ahead must not be overlooked, despite his reputation as a serving maestro and dead ball wizard. Arnold’s awareness, which he has before grabbing the ball, seems to be crucial for the veteran’s passing success. He acknowledges that he is in a hint of room and glances his head around to look for options or find a running room. Arnold has a penchant for altering strategy to eliminate opponents. The perfect midfielder, Germany’s Olympics’ dreams will lie heavily on the virtuoso’s shoulders.

The Clarets marksmen, New Zealand born Chris Wood has been an exemplary servant of the Premier League. A goal tally that has already reached a half-century, the lanky striker is a formidable assist for any outfit. The ‘All Blacks’ will bank on their talismanic striker to mirror his club performances when he dons the august black outfit.

New Zealand’s manager Anthony Hudson, considers his mindset to be one of his greatest assets. “Woodsy is a top professional and great to have in the team,” he explained to Sky Sports. “He’s incredibly single-minded and focused on what he wants.
“I’m not surprised one bit at how well he’s doing right now, it’s certainly not by accident. And he loves playing for his country. He’ll be back in the Premier League soon.”

While replicating the winning mentality would be crucial for Wood, writing an underdog story for the future fans would be clouding his thoughts.

With the strength of a wrestler and the mindset of a perfectionist, Eric Bailly defensive masterclass’ sometimes gets lost in the Red Devils’ attacking creativity. A leader on the pitch, Ivory Coast’s dreams lie heavily on Bailly’s muscular shoulders. Massive, swift, powerful, energetic, and adaptable. Five phrases will exhilarate his international supporters whenever he’ll don the prestigious outfit.

Another winning comeback this season. 🔴🔥 pic.twitter.com/ZSGMruIk6Q

What’s particularly remarkable about his glittering career is his ability to manage his team’s defensive line on big occasions. While there is no bigger occasion than the Olympics, the Red Devils’ centre-back will leave no stone unturned in Tokyo.

He demonstrated his sceptics with 44 goals in his first 18 months at Tigres, featuring numerous spectacular cannons and camera balls that few other players wouldn’t imagine risking. When rosters are revealed at Tigres’ rustic Estadio Universitario, Gignac, affectionately known as “El Bombón” for his charming personality, gets the greatest screams.

The Benzema of France’s Olympic squad, Pierre Gignac has earned himself a place in the Olympics squad. With Les Bleues faltering in Europe this campaign, the French supporters would back their youngsters combined with Gignac’s extraordinary experience to bring the gold medal to France.

After excelling in Germany for the past year or so, Amiri is considered as one of the Bundesliga’s finest talents. The talented midfielder covers every inch of the grass in his Bundesliga expeditions. And the 24-year-old will look to showcase his talent and earn a place in Hansi Flick’s Die Mannschaft senior roster.

2 goals this campaign shroud his commitment for Bayer Leverkusen who were soaring high because of Amiri’s heroics. A German team looking to create history in Tokyo will expect Nadiem Amiri to leap across every hurdle that comes their way. A difficult group will be the leading challenge for Amiri and the company in Tokyo.

Thauvin is an incredibly quick mid-fielder who will rarely let you down if you send the Frenchman darting forward. Having watched him multiple times this season, he appears to be all over the place. He is an extremely dynamic player that goes all over the centre. If seeded in front of the goal,

Thauvin with his laser precision will more or less strike the back of the net. An aerial threat in France’s arsenal, Thauvin attracts fouls from his opposition like a magnet. He rarely commits an unnecessary foul and his temperament is quite exceptional