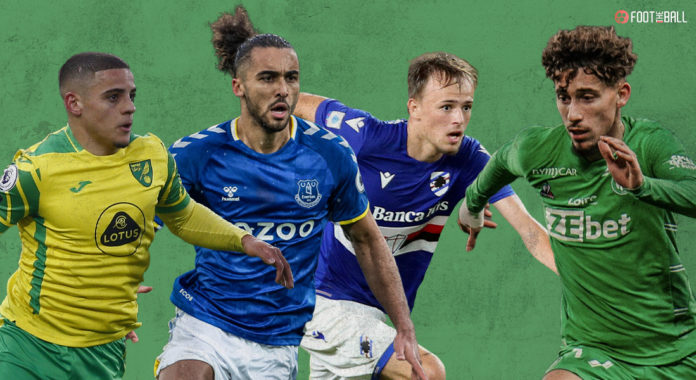 The business of leagues around Europe is fast approaching. Teams across both ends of table are gearing up for their respective goals. As always, there are more than than three teams across each league’s relegation picture. At least four to five clubs will be involved in an almighty scrap to stay in the top-flight.

Each team has some players who are of far greater quality than to be playing for a bottom-tier team. FootTheBall looks at 10 players from Europe’s top-five leagues who deserve a move to a much better team.

Burnley have really started embracing the foreign market in order to remain in the Premier League. Cornet was a regular for Lyon for six years, playing mostly left wingback or left winger, and scoring over 50 times. Sean Dyche sprang a surprise by signing the Ivory Coast international and playing him as an attacker. The results have been great so far, with Cornet already netting six times to become the Clarets’ leading scorer.

However, the situation is not great for Burnley, sitting one point from safety. Dyche knows that keeping young, foreign attackers will not be easy if they go down. Though Burnley have two games in hand, the relegation battle is not looking easy. They will be hoping that Leeds or Everton slip up and hand them a boost.

The 19-year-old extremely talented attacking midfielder is one of Europe’s hottest prospects. However, Saint-Etienne are having a terrible season, sitting just two points above the relegation zone in Ligue 1. Les Verts appointed Pascal Dupraz in December and results have picked up a bit. They have lost only four of their 11 games across all competitions this year.

Nevertheless, Saint-Etienne will need to win at least half of their 10 remaining matches in order to survive. Meanwhile, Aouchiche is putting up some solid numbers, being used mostly from the bench this season. Though he is yet to score, Aouchiche has proved four assists. One of the brightest young ballers in the game could surely be on the move before next season.

Everton are in a right old crisis. Frank Lampard is having a really tough time turning the Toffees’ form. Having been one of the biggest spenders in Europe over recent years, meaning their squad is stacked with big names. One of the most talented in that lot is the English frontman. Calvert-Lewin got injured just three games in the season and only made his return in January.

Dominic Calvert-Lewin’s goal vs. Southampton saw him become the 7th player to reach 30+ PL goals since the beginning of 19/20:

How much is he worth right now? 💰 pic.twitter.com/1kDwkUHiBJ

The impact has been clear, with Everton being amongst the lowest scorers in the league. All three of Calver-Lewin’s goals came back in August and he is yet to find the net this year. Moreover, as Everton struggle, Calvert-Lewin’s sharpness has taken a huge hit. This after scoring 16 times last season. No doubt there will be several clubs circling around for the striker with a lethal finish if Everton are indeed relegated.

The Danish winger gained international fame with his exploits at Euro 2020. Two goals and one assist made him a hot talent at 21-years-old. However, Damsgaard would only be able to play in seven league matches this season. He picked up a hamstring injury on international duty in October and has not featured since. Sampdoria have struggled in Damsgaard’s absence and are currently in 16th-place.

Only four points separate them from the Venezia in 18th-place. Marco Giampaolo was appointed in January, but the losses continue. Sampdoria have lost four of their six matches since February, with no good news in sight. They will be desperate for Damsgaard to return soon, with the player expected to play some games before season’s end.

England’s run to the final of Euro 2020 gave the nation many young heroes. One of the most loved amongst them has been the Leeds defensive midfielder. However, this season has been a very frustrating one for both parties. Phillips has only featured 12 times, the last of those coming back in early December.

In his absence, Leeds have leaked goals like anything, conceding a league-high 64 times already. Jesse Marsch has been brought in to steady the ship but lost both of his first two matches.

Phillips is an expert protector before the defensive line, winning the ball back and intercepting heavily. Furthermore, he can also start attacks from midfield and can fill in as a centre-back. Leeds are teetering on the edge of the relegation zone and Phillips will be in high demand if that happens. Several teams are in need of a great screener in midfield so there will be no short of offers.

The North Macedonian midfielder is one of the most vital cogs for club and country. Bardhi has featured 21 times in La Liga this season, scoring thrice and assisting twice. Levante have not played up to the mark so far despite some strong results. He was the star of the show with a brace against Atletico back in October. The team has also secured superb draws against both Barcelona and Real Madrid.

Furthermore, they defeated Los Rojiblancos just last month itself. Manager Alessio Lisci is in his first senior managerial role, and it has not been easy. They are six points adrift of safety, sitting dead last with just 19 points. Bardhi have been one of the few shining lights in a dreary season and could well leave the club if they are relegated.

The American winger was one of the rising stars from Schalke’s academy. Hoppe played 25 times for Schalke’s senior team, scoring six times in 2020-21. Therefore, it was a bit of a surprise when he left for Mallorca after the club got relegated. The fresh start that he had been hoping for has not materialized yet. Hoppe has only managed to appear four times in the league, assisting once.

Thanks to all the fans that came yesterday. Focus turns to Sunday 🔋 pic.twitter.com/a2ZrYrvDpv

Mallorca have not been in great form recently that has deepened their relegation woes. They have lost four consecutive games on the trot and are just two points above 18th-place Cadiz. Hoppe can still make an impact on the team’s performances to close out the season.

Mallorca will be hoping to end their rut and get back to winning ways soon. The 20-year-old should getting regular game time to fully unlock his potential for a mid-table team at the least.

One of the rising full-backs in England, Aarons has been a terrific player for Norwich City. His speed, agility and able to carry the ball upfield make him a real asset down the right flank. He has started 26 out of the 27 matches but the goal contributions have been lacking. Only one assist so far highlight the Canaries’ woes, stuck to the foot of the Premier League with 17 points.

⭐ STAR MAN ⭐@maxaarons2 is in line to make his 100th appearance for Norwich City tonight! 👏 pic.twitter.com/7RsU1CeAoF

They have lost all five of their most recent league games, and a great escape looks unlikely. Aarons will be heavily in demand if Norwich do go down with suitors on hand. The 22-year-old has created 14 big chances and won 67% of his tackles, showing both sides of his game. Furthermore, with age on his side, Aarons will be the perfect starter or understudy for any team.

Borussia Monchengladbach’s demolition of Bayern Munich made great news this season. In all other aspects, the season is going terribly. One of the players who is having a strong individual campaign is 19-year-old Netz. Having come through the Hertha Berlin academy, Netz’ first season with the first team is going well. He has assisted twice and his overall game speaks highly of a promising future.

17 – At age 17 years and 274 days Luca #Netz is the youngest Bundesliga scorer of @HerthaBSC_EN . Diamond. pic.twitter.com/tZbYdEnE6T

Meanwhile, the Foals are just four points above the relegation playoff place and five above automatic relegation. Netz can stay with the team in the second-division, given he has just started his career. However, the more likelier possibility is he will be snapped by a better team who can continue his development further.

Another player who has stayed with his club through some tough times. Sarr joined Watford in 2019 and got relegated in his first season. He was on song last year, scoring 13 times and assisting four times as the Hornets gained promotion. Sarr has continued his good form in an injury-hit campaign this time. Five goals and an assist from 16 games is a decent return but it may not be enough to save Watford from relegation.

Celebrate Ismaïla Sarr's birthday with all of his strikes for Watford so far! 🇸🇳⚽️ pic.twitter.com/BiG41Hy1IY

Roy Hodgson is the third manager in just 28 matches with his side losing three of their last four matches. Sarr has shown decent loyalty for a player of his quality but this maybe the time to move on. Any top-eight side will be much better with him and Sarr can bamboozle any defence to score on his day.

Frank-ly running out of time!