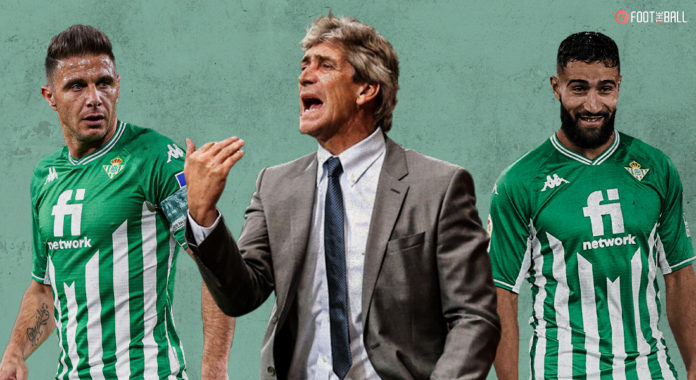 A lot has changed in the time elapsed since their last ‘golden age.’ Betis have spent three seasons in the ignominy of the Segunda. They ‘won’ in court against their owners to give the operational responsibility to a former legend in Rafael Gordillo. They’ve even seen a change in the name of the stadium – returning to its original identity of Estadio Benito Villamarín following 10 years as the Ruiz de Lopera Estadio, after the egoistic businessman owner they fought to remove had named the stadium after himself, as egoistic businessmen tend to do.

The most pinching change though is in the success of their rivals, Sevilla, who have won two Copa del Reys and six Europa Leagues since 2005. Unai Emery’s legendary spell at Sevilla is responsible for the majority of those.

It marked a departure from the days when the two clubs would celebrate each other’s relegation even if it comes at the cost of a defeat of their own team.  2021-22 is thus Betis’ chance to cover up lost ground and even out the bragging rights a bit.

The Old Man of Betis

Despite all that has changed, a few things remain the same. Most obvious of which is the monolith that is 40-year old Joaquin. He was there for their last successful period near the top and after his own adventures in Malaga, Valencia and Fiorentina, he returned in 2015 – heralding the coming of good times like 12 grapes on New Year’s Eve.

Joaquin has now featured in more Seville derbies in #LaLigaSantander than any other player! 💚#LaLigaHistory pic.twitter.com/I6J5XdbXB6

It is fitting that the best season of the club in recent memory is also going to be Joaquin’s last. The winger announced back in November his intention to retire at the end of the season and it almost clicked Betis into place, a good farewell seemingly being the impetus they needed to step it up a notch.

Fighting on all Fronts

Since the turn of the year, they managed to reach the final of the Copa del Rey, sweetly knocking out rivals Sevilla in the process. Betis also sneaked their way into the Europa League Round of 16, knocking out Celtic in the group stage and saving UEFA bureaucratic trouble by overcoming Zenit St. Petersburg in the previous round. They have further managed to keep pace with the top four, currently lying in fifth, just four points behind Atletico Madrid in fourth.

Now with Copa del Rey win in the bag after an unforgettable victory against Valencia, Real Betis’ season has already exceeded expectations. However, the job is not done yet. They were beaten by Eintracht Frankfurt in the Round-of-16 but greater things could be on the horizon for Betis.

There’s a real chance to qualify for next year’s Champions League. Atletico Madrid have never looked more vulnerable and a four-point gap to them in fourth would give Atletico serious nerves. Buoyed by the Copa del Rey win, fight for fourth could go down the wire.

But this season will still go down as a success for Los Verdiblancos. It has been a long way back up for them and this upturn in results over the past couple of years has been a validation of their operating style. Even if UCL is not secured, Betis will continue to rehabilitate and fight, as they have done for so long.

It’s also clear that this spirit extends onto the pitch via their signings and appointments. The Estadio Benito Villamarin has become a safe place for players to build and rebuild their careers, a shrewd modus operandi for everyone involved. A quick look at the current roster throws up many familiar names, some of whom have struggled at the very top and dropped down a touch and some of whom are on their way up, taking the slower more scenic route.

The squad, led by Joaquin, includes the likes of Claudio Bravo, Hector Bellerin, Marc Bartra, Martin Montoya, William Carvalho, Cristian Tello, Borja Iglesias and Segio Canales. There are also promising young players in Diego Lainez, Juan Miranda and Rober Gonzalez. It is a rag-tag bunch of has-beens, almost-theres and upstarts, fittingly managed by Manuel Pellegrini who has been in those three categories at some point over the past couple of decades on his own.

The Chilean coach is perhaps a coach who has been hard done by fortune. His achievements have often been overshadowed by those of his opponents, even when he has triumphed. He was the one who oversaw the building of Madrid’s modern-day galacticos with the signings of Kaka, Cristiano Ronaldo, Karim Benzema and Xabi Alonso in one transfer window. He laid the foundations of Jose Mourinho’s swashbuckling 2011-12 side – something he does not get sufficient credit for.

Pellegrini’s time at Manchester City is also usually an afternote, sandwiched between Mancini and Guardiola. City’s 2013-14 title win under him is written off down to Liverpool’s self-combustion. Their Champions League failures were attributed to the manager, ignoring the fact that he reached the quarterfinals in the competition with Malaga and the semifinals with Villarreal.

Thus, in many ways, Real Betis have already achieved what they set out to do – prove people wrong. It is not so by accident. They have developed a comprehensive playing style and made moves that are conducive to this style. The club has developed an identity to be proud of, and a story to be told. Whatever comes next is a bonus.