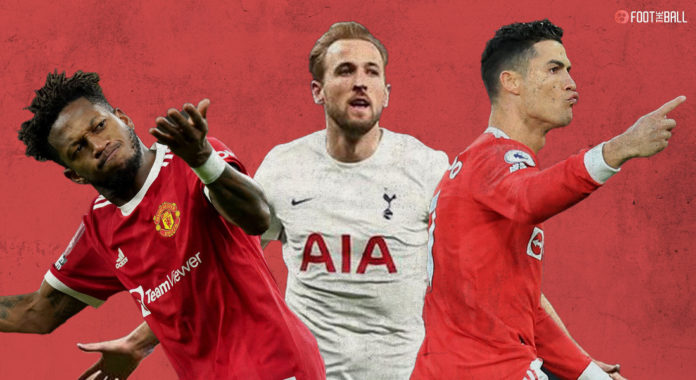 Two teams vying for the final Champions League spot. Manchester United have slipped down to fifth-place after last week’s defeat to Manchester City. Meanwhile, Spurs thumped Everton to close the gap to the top-four.

It was an even start to the game, both teams patiently working the ball around. Then Cristiano Ronaldo produced a moment of magic. Fred’s flick to him found him more than 25 yards away from goal. He took a touch to set himself up before shooting a beautifully curling strike that evaded Hugo Lloris’ desperate dive.

Spurs had the ball in the net within minutes but Ben Davies’ finish was ruled out for offside. They were controlling possession and having chances. Eric Dier’s header was cleared off the line by Diogo Dalot. United were struggling to keep ahold of the ball for more than a few seconds, preferring to sit back. That pressure paid off as Dejan Kulusevski’s attempted cross was struck Alex Telles’ left hand inside the penalty box. Harry Kane stepped up and made no mistake, even though David De Gea went the right way to his right.

Some magic work from Deki won the penalty and H made no mistake! Get in!

United immediately retook the lead. Jadon Sancho’s run in behind the defence was not tracked and he crossed for Ronaldo who finished from close range. Spurs players were calling for offside but Sergio Reguilon had played the attackers on. Spurs tried hard once again to get level before halftime but it was not to be. The score remained 2-1, though the feeling was that there could be more goals.

Harry Kane's penalty brought Spurs back into the game but Man Utd finish the half ahead thanks to two goals from Cristiano Ronaldo#MUNTOT pic.twitter.com/mjhGhpJr2S

The second half was more of the same with Spurs seeing more of the ball. Their best chance fell to Son Heung-Min whose first time shot from just inside the box went wide. United were mostly relying on the counter attack as the game entered the final 20 minutes. That proved to be a bad move. Spurs kept going forward and Reguilon’s fizzed cross from the left was knocked into his own net by Maguire.

GET IN. Reggy puts in a dangerous ball and Maguire turns it in to his own net.

Ronaldo tried to get his team back in front again, with his toe-poked effort well saved by Lloris. The resulting corner was the game clincher, Ronaldo powering a header past a static Lloris to put United back in front. That was that with United getting back to winning ways on a record breaking night.

They called him the “problem,” they said he was “finished” and hiding from defeats. Well, Ronaldo answered as only he can. Three goals to take him to 807 official goals and the highest scorer in football ever. The first was a marvelous strike from distance while the second was a trademark striker’s run and finish. The third was a bullet header from a corner. The rest of the team was middling and bright in patches.

49 – Cristiano Ronaldo (37y & 35d) has scored the 49th hat-trick of his club career, while he becomes the second oldest player in Premier League history to net a treble after Teddy Sheringham in August 2003 (37y & 146d). Speechless. pic.twitter.com/FUwWb6Axet

Fred had a great game, running with the ball quickly and starting attacks but Marcus Rashford disappointed once again. Harry Maguire’s own goal was unfortunate and the win feels like a deserved result, given how little possession they had overall.

They dominated the ball, they attacked almost every two minutes but Spurs could not get the job done. Antonio Conte’s side twice came back to level things up and deservedly so. Kane’s penalty was the correct decision while Maguire’s own goal was lucky. However, their play in the final third left a lot to be desired. Spurs were finding their attackers but they could not test De Gea enough. Rodrigo Bentancur had a very poor game, giving the ball away cheaply a number of times. Matt Doherty too could not live up to last week’s standards. A good chance to grab a point lost.

United regain the fourth spot from Arsenal, though the Gunners have four games in hand. Meanwhile, Spurs are now five points adrift of United with two games in hand. West Ham are also firmly in the mix and who gets the final position is anybody’s guess currently.