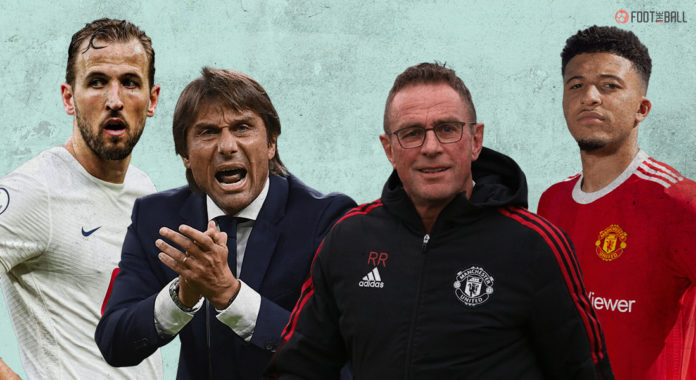 United were listless against their neighbours who completed the double over them. Despite Jadon Sancho’s wonderful solo goal, the defence capitulated in the second half. They have slipped down to fifth-place with Arsenal above them having three games in hand. Ralf Rangnick is having a tough time trying to implement his ideas with such an unsteady backline.

The loss in form of Marcus Rashford and the lack of attacking alternatives has left them immensely goal shy. The form of Sancho is the only good thing going for them while Paul Pogba is showing sparks of old form. United will need to be at their best as this Spurs side is a different beast from the last time out.

Spurs have doing very spursy things of late. Victory over City was followed by defeat to Burnley. A hammering of Leeds buoyed hopes but an FA Cup exit to Middlesbrough dampened them. Antonio Conte has kept his goal at getting into the top-four which can get a fresh boost with a win over another contender. The partnership between Harry Kane and Son Heung-Min is blossoming again.

Next up: @ManUtd (A) pic.twitter.com/Lve1cmKe3X

The defence has improved with the return to form of Cristiano Romero. Dejan Kulusevski is showing supreme early promise with his passing and running. The team is capable of pushing for more with two games in hand over United. The defeat for Spurs in the reverse fixture spelled the end for Nuno Espirito Santo and arrival of Conte. He will be gunning to pick up a key win here.

Cristiano Ronaldo’s issue with his hip flexor has been causing problems. Edinson Cavani has not trained much in recent weeks. It remains to be seen who starts as the forward option. Raphael Varane has returned to training but Luke Shaw has not been seen yet.

🚨 Get the latest update on @RaphaelVarane, plus two more key Reds ahead of #MUNTOT…#MUFC | #PL

Sessegnon picked up an injury in the win over Everton. Japhet Tanganga and Oliver Skipp remain out.

Sancho getting back to his Borussia Dortmund levels has been one of the highlights of the recent weeks. Having played him across both flanks since arriving, it does seem like Sancho fits best on the left side. That allows him to cut inside onto his right foot and either shoot or cross for teammates inside the box. This was exactly how he scored against City. Furthermore, his extreme pace and bag full of skills can leave any defence befuddled.

Jadon Sancho has directly contributed to 4 goals in his last 5 Premier League games.

⚽️ vs Southampton
🅰️🅰️ vs Leeds
⚽️ vs Man City

A wonderful goal vs his previous club. 👀🔴 pic.twitter.com/k7pVQBSQjT

Spurs do not have the best defensive line which can panic if he runs at them. He can also switch sides as it becomes necessary like his bursting run and cross for Bruno Fernandes from the right side against Leeds United. Rangnick knows that Sancho can get the better of centre-backs on most days and with world-class attackers around him, he has the chance to make a real impact.

Heung-Min Son has scored 11 and assisted five goals in the league, and always looks the likeliest to score for Spurs. Cutting in from the left side, his favourite thing is to shoot from distance, curling the ball away from the goalkeeper. Son is also an adept runner with the goal and has scored some amazing solo goals, illustrated by 8.99 progressive passes received per 90.

While only team-mate Harry Kane (8) and Man Utd’s Bruno Fernandes (7) have been involved in more goals in the competition in 2022 (6 – 3 goals, 3 assists) pic.twitter.com/X7R0yrLJIm

His mobility is greater than Kane’s, meaning the latter’s linkup play and superb passing will set Son free. Both of United’s right-backs are not in great form at the moment. Aaron Wan-Bissaka was given the run around by Phil Foden while Diogo Dalot is not great defensively. Though he may not win many aerial duels, his greatest asset is charging at defenders with the ball that can worry the backline.

Given the recent form of both sides, a winner is hard to call. It may come down to the key moments and which team seizes them better. FootTheBall predicts a 2-1 win for Spurs.