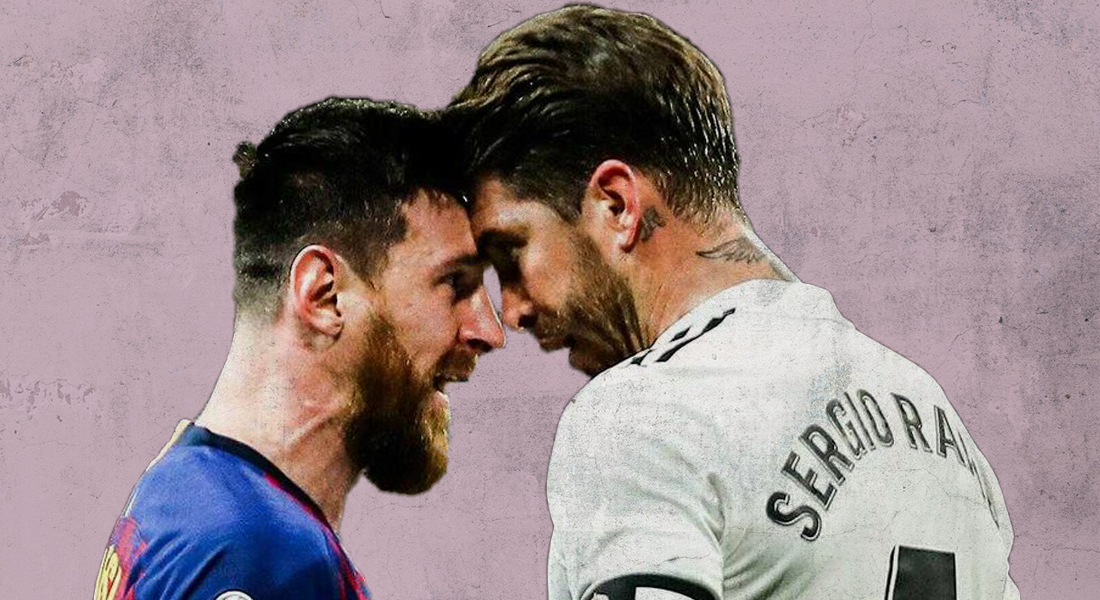 El Clasico – perhaps the biggest and grandest game in the realm of club football save the UEFA Champions League Final. More often than not, such matches bring out the best in every player who plays on the pitch, captivating the imagination of the audience, earning plaudits from fans and pundits alike and writing one’s name in football folklore for posterity to remember. But games of such intensity and passion also bring out the worst in some players, who in their fury and anger cross lines that should never be crossed.

Barcelona’s Rivaldo was in breath-taking form that night in Madrid, scoring two goals in the match. As time ran out, both teams looked to deliver the sucker punch with the score evenly balanced at 2-2. In the dying moments of the game, the Brazilian unleashed a powerful shot that ended up in the bottom right corner of Real Madrid’s goal. He had scored the perfect Hat-trick to win El Clasico for the Catalans…or so it seemed.

The referee deemed the goal to have been scored from an offside position, triggering incensed reactions from the Barcelona camp. Pep Guardiola was visibly furious at having been denied a clear goal. Meanwhile, Rivaldo met the referee’s decision calmly, but on his website he expressed his disappointment in relation to the incident, adding that referees always wanted Real Madrid to win the league.

Barcelona were desperately driving forward in search of a goal to level the scoreline, with players on the lookout for a stray ball or a deflected attempt that would end up in the back of the net and earn Barcelona at least a point for all their huffing and puffing in Real Madrid’s half. As the minutes started drying up, Barcelona committed players forward with urgency and Ramos couldn’t handle the pressure and ended up fouling Adriano inside the penalty box.

But, to everyone’s surprise the referee didn’t penalise Ramos and this led Barcelona’s goalkeeper to lose his cool at being treated unfairly by the match officials and he ended up using abusive language when expressing his discontent at not being awarded a penalty kick which ultimately led the referee to give him a red card. In the end, Barcelona players felt they had been cheated as they walked off the pitch.

The pair came face-to-face as managers during the 2016-17 season, but they had had a more publicised and brutal run-in in April 2003 in the Spanish capital.

Zinedine Zidane had the ball when Carles Puyol attempted to regain the possession of the ball with a tackle on the Frenchman. Zidane got infuriated and hit the Spanish defender with his arm, with Enrique coming to confront the former Juventus midfielder as both of them got engaged in a brawl. Zidane screamed right in Luis Enrique’s face and attempted to shove him in the face, only receiving a lowly booking for such a grave offence.

During Barcelona’s clash with Real Madrid in the Copa Del Rey quarterfinals, Messi was as usual wreaking havoc on the Real Madrid defence, something that didn’t go down too well with Real Madrid’s Portuguese defender, Pepe. The current Porto player sensed an opportunity to slow down Messi on the pitch when he stamped on the Argentine’s hand while he was laying down on the ground.

Lucky for the Portuguese that the referee didn’t see the incident and therefore Pepe didn’t attract any trouble and surprisingly was not even subject to retrospective action. The defender later apologised for the incident and termed it as an ‘unintentional’ act.

In this match, Barcelona outclassed their arch-rivals by some distance, winning 5-0 as Messi and company ran riot through the Los Blancos’ defence. In terms of the scales of power, dominance effectively shifted from the Spanish capital to the Catalan capital. But in the 30th minute of the match as the ball went out of play, then Barcelona manager Pep Guardiola picked it up, but looked hesitant about handing it to the Portuguese.

Visibly frustrated with the score line, Ronaldo pushed Guardiola without giving it a second thought and earned himself a booking in the process. Barcelona players including Pedro came near the touchline in defence of Guardiola. Ronaldo mockingly asked Pedro who he was, with the Spaniard replying cheekily by asking the current Juventus talisman if he knew he was talking to a World Cup champion.

In the traditional curtain raiser of the Spanish football season – the Spanish Super Cup – Marcelo was sent off for a reckless tackle on Cesc Fabregas. The Barcelona bench got up and got in a heated brawl with their Real Madrid counterparts. The match officials tried in vain to restore patience and order amongst the players, but to no avail.

In the midst of all the chaos, something that even exceeded the preposterous levels of indiscipline in these matches was when Jose Mourinho poked his fingers in Tito Vilanova’s eyes. This has come to symbolise the bitter resentment the two sides have for each other. Vilanova wasn’t able to do much in terms of retaliation to the then Real Madrid manager, but this incident has marred Spanish football’s reputation and image on the global level.

In the run up to Barcelona’s semi-final clash against Real Madrid, Pep Guardiola – seldom prone to heated outbursts or displays of passion – let his emotions get the better of him as he used expletives for Jose Mourinho in the pre-match press conference ahead of the all-important tie.

Mourinho had earlier accused Guardiola of criticising referees whenever they made correct decisions and took the right calls. Guardiola took offence to Mourinho calling him by his first name and in the subsequent rant the Spaniard hit out at the Portuguese for stooping so low in order to express his displeasure at Guardiola lambasting refereeing decisions.

Luis Figo, a revered player at Barcelona who was loved by fans who saw him as a saviour. He betrayed the Camp Nou faithful by joining El CLasico rivals as he made a switch to  Real Madrid in the summer of 2000, thus beginning the Galactico era at Real Madrid. When the Portuguese came back to the Camp Nou the following season, he was received by fans with vitriol that until then had been unheard of in footballing history.

His symbolic betrayal had left a deep wound in the fans’ hearts in Barcelona and some say that to this day it has not healed entirely. Today, Figo, even though he is one of the best players of his generation, is regarded as a fraud and a traitor in the Catalan capital.

In the quarterfinal second leg of the Copa Del Rey an El Clasico was drawn up, Barcelona were leading 1-0 courtesy of a Carles Rexach goal and were hopeful of overturning a first leg deficit and eventually win silverware at the end of the season. But inexperienced referee Guruceta awarded a penalty to Los Blancos even though the foul had been committed well outside the penalty box.

The resulting penalty was converted by Real Madrid which led to a pitch invasion by fans seated in the stands. The Barcelona players decided to walk off, but were later convinced to carry on with the match. Nevertheless, they all were rebellious and tumultuous at having been meted out unfair treatment at the hands of the rookie referee.

Barcelona had won comfortably in the first leg of the Copa Del Rey semifinals by a 3-0 score line and were confident coming into this match of progressing to the final. But what happened in the second leg couldn’t have been imagined by any player or spectator.

In what is seen as the most controversial El Clasico of all time, Spanish dictator Francisco Franco “reminded” Barcelona players that they were able to play since the regime tolerated their lack of patriotism.

This sent shivers down the spines of all Barcelona players as they chose between playing to win or playing for their life. Understandably, they all caved in after the ominous warning and ended up losing the match 11-1 against Los Blancos.