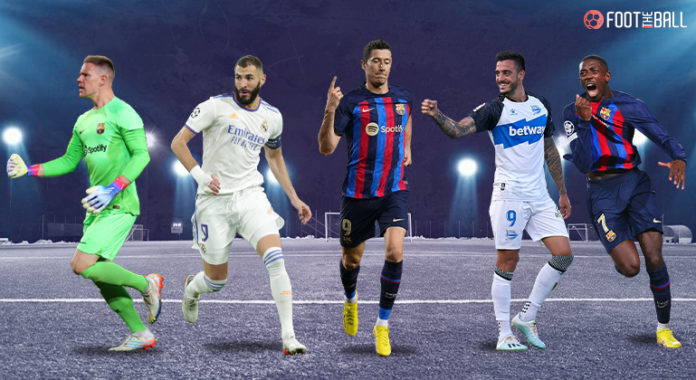 The La Liga is currently having the most intense title race of all major leagues in Europe, with Barcelona and Real Madrid level on points. However, while Barcelona are ahead owing to their superior goal difference, it looks like the title race is going all the way down the wire.

La Liga was one of the worst affected leagues due to Covid-19 and, combined with the departure of Lionel Messi, which financially affected it. However, since then, Real Madrid have won the Champions League. In addition, the league has seen brilliant players such as Robert Lewandowski, Raphinha, Ferran Torres, Aurelien Tchouameni, and Antonio Rudiger, which has raised its profile.

However, among all the transfers, none have been more successful than Lewandowski, who has been the target man Barcelona have sorely missed since Luis Suarez’s departure.

And we bring you the stats from an incredible La Liga season.

Robert Lewandowski: He may be 34 years old, but Robert Lewandowski shows no signs of slowing down. After signing for Barcelona, there were concerns about whether Lewandowski would be able to adapt to the league. However, 13 goals in the league prove the Pole has been a wise investment. His goals have been the reason why Barcelona are top of the league despite getting knocked out in the Champions League group stages. The club have been so dependent on him that their second-highest scorer is Ousmane Dembele, with only four goals to his name.

Joselu: Espanyol are experiencing a nightmare season in La Liga, with the team just three points above the relegation zone. However, one player who can hold his head high is Joselu. The striker, who joined over the summer, has been the lone spark for Espanyol, scoring ten out of the total 22 goals scored by the team. And if Espanyol want to stay in La Liga, Joselu will have to do most of the heavy lifting.

Karim Benzema: The current Ballon d’Or winner was having an underwhelming season before the World Cup, having scored only five goals. However, missing the tournament in Qatar has been a blessing in disguise for him as he has been in form since the league restarted, scoring four goals in three matches in the league, taking his tally to nine.

Vedat Muriqi: Ever since returning to the top league, Mallorca have been a mid-table club in La Liga. This season has been the same as they currently find themselves in 11th. Vedat Muriqi has been a primary reason for that, as his eight goals have ensured the team are far above the relegation zone. The Kosovan joined the club in January 2022, having scored one goal in 38 matches for Lazio. However, since then, he has scored 13 goals and provided four assists in 29 games across two seasons.

Borja Iglesias: After finishing fifth in La Liga last season, Real Betis are again going strong, currently in sixth. And their primary source of goals this season has been striker Borja Iglesias who has scored eight goals till now. Iglesias has been part of the team since 2019. However, this season has been his finest, and he is only three goals away from equalling his best season tally for Real Betis.

Mikel Merino: Real Sociedad are flying high in the La Liga. The team are currently in third place and have positioned themselves firmly to qualify for the Champions League. And one of the men having a stellar season is Mikel Merino, who has provided seven assists, the most by any player in the league.

Ousmane Dembele: At one point, it was almost certain Ousmane Dembele would leave Barcelona. However, the Frenchman has not only stayed but has also become their best creative player. Dembele has scored five goals and provided five assists helping Barcelona climb all the way to the top of the La Liga table.

Rodrygo: Real Madrid’s charge at the La Liga title has been a team affair, with no particular player dominating the goal-scoring or goals-creating department. Rodrygo has been their best man, creatively creating five assists for his teammates.

Brian Olivan: If Joselu is scoring the goals for Espanyol, then Brian Olivan is the man creating most of them. The 26-year-old has been a menace for the opposition down the left flank and has made five assists which have won Esapnayol crucial points in the season.

Unai Simon: Unai Simon was the starting goalkeeper for Spain at the 2022 World Cup. That came after some impressive displays season after season, and the current one has not been any different. The Athletic Club Bilbao man has kept eight clean sheets so far in the season.

Alex Remiro: Real Sociedad have been one of the most improved sides in La Liga as they sit in third, just behind Barcelona and Real Madrid. And one of their stars has been Alex Remiro, a man with seven clean sheets to his name.

Rui Silva: Real Betis have the third-best defence in La Liga after Barcelona and Villareal. This proves how influential Rui Silva is in goal for his team. Silva has kept six clean sheets so far in the league while playing 14 matches helping his team to remain in the Champions League spots.