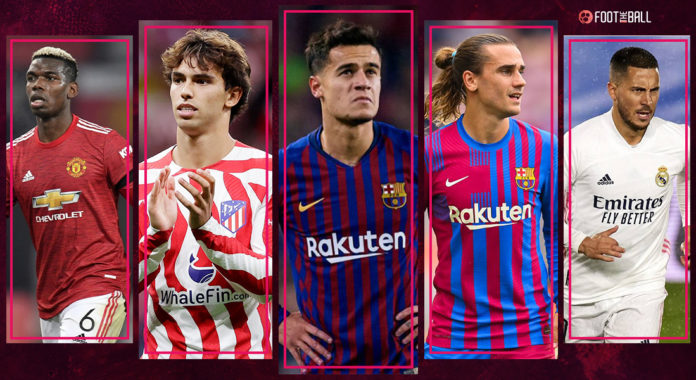 Money spent in football is not always money spent well. Big-money signings have become a norm in modern-day football and for the elite European teams to compete for the biggest prize. But what clubs do not understand is that not every time splashing the cash works and guarantees you silverware in football.

Ever since the likes of Neymar and Kylian Mbappe moved to PSG for record sums of $222m and $180m respectively, cash flow has increased among clubs substantially. Like a domino effect, clubs have used the money earned by selling their star assets and reinvested through big-money signings of their own. Although what the clubs haven’t realised is buying star footballers does not always work. Keeping that in mind, FootTheBall assesses the most expensive transfer flops of all time.

The most unplanned and illogical transfer in the history of football has to be this one. It was in the same season when Neymar earned his big money move to PSG and left a gaping hole in the attacking trio of Barcelona.

Barcelona had attempted to sign Coutinho to replace Neymar in the same summer, but Liverpool were adamant not to sell one of their key assets. In the end when Barcelona once again came calling in the winter transfer window of the same season, Coutinho had his head turned by then.

The Brazilian attacking midfielder eventually got his move to the Catalan giants and has since made a permanent switch to Aston Villa after 4 abysmal years at the Camp Nou.

Antoine Griezmann was at the peak of his powers in his first spell at Atletico Madrid before making that dreaded switch from Madrid to Catalunya. Josep Maria Bartomeu failed in his attempts to fill the Neymar void with Coutinho signing and decided to go and sign Griezmann from Atletico Madrid for another record fee.

Griezmann not only failed to justify the price tag but his performances were nowhere near his former self. In the end, Barcelona decided to send the World Cup winner back to Wanda Metropolitana where he has since stamped his mark there.

He might still have age on his side but time is surely running out for the once Portugal wonderkid. Joao Felix recently completed a loan move to Premier League giants Chelsea, where he impressed in his first 55 minutes on the pitch, before being sent off.

Atletico Madrid will hope that Felix gains some much-needed game time in the physical Premier League and be the talisman they needed and bought a few years back.

The only player that would have been able or will be able to pull off such a cycle of transfers. Paul Pogba came through the Manchester United academy before leaving for free in 2012 and join Juventus.

The Red Devils came calling again and eventually paid a club record fee to bring their once academy graduate to the Theatre of Dreams. Paul Pogba did not live up to the hype and expectations and did not suit Mourinho’s pragmatic style of football. This led to him running down his contract once again and leave as a free agent, only to join Juventus, AGAIN!

G.O.A.T. without reason? No, he's one of the most influential personalities on the planet💪#Messi #Ronaldo #CR7𓃵بث pic.twitter.com/E3RIc7GTwb

The player who once had the most Premier League Man of the Match awards. Eden Hazard was the shining light for both Chelsea and the English league and did so on a consistent basis for 7 years.

Real Madrid had been around the corner waiting to sign the Belgian superstar and they got their chance. Hazard had just 1 year remaining on his Chelsea contract and made it clear to Chelsea that he wanted to join his dream club. Although, what was shocking was Real Madrid and Florentino Perez baulked at Chelsea’s humungous asking price for the player who had less than 11 months on his contract.

Little to say, Hazard’s career took a downhill road from there and injuries haven’t helped his cause. For Chelsea, this was their best bit of business in recent history, not so much for Los Blancos.

The man who had “unfinished” business from his first stint at Chelsea. Romelu Lukaku made a blockbuster return to his dream club as a kid for a record fee for Chelsea. Chelsea fans couldn’t have been more excited about the signing of Lukaku who had a point to prove, after failing to score a single goal in his first spell at Stamford Bridge.

Lukaku began his second spell firing on all cylinders, but little did he know what was about to come. Injuries hit him at the wrong time and the controversial interview with Sky Sport Italia did not help matters. He ended up playing just one season at Chelsea on his return after which he returned on loan to Inter for 2022/23 season – the club where Chelsea bought him from.

Social media became unbearable the day Arsenal unveiled Nicolas Pepe as their new record signing. It was even worse a few weeks later when he dribbled past Virgil van Dijk and fooled people into thinking he was going to be a superstar.

In the red of Arsenal, Pepe has looked a lot like an annoying five-a-side teammate, endlessly dribbling down dead ends, never knowing when to release the ball and barely contributing anything tangible to games.

He has since been loaned back to Ligue 1 at OGC Nice but has very few chances to really make the cut at the Emirates at this point.

The most expensive goalkeeper in the world, and yet nowhere near the best.

While the £72m signing may have finally reclaimed his starting spot from Edouard Mendy, it would not be a surprise to see Chelsea try to sell the Spaniard at the end of the season – particularly after his latest gaffe.

There might not be many takers, of course. Kepa is clearly not a top-level goalkeeper. Indeed, he will probably forever be associated with the Carabao Cup.

Firstly, for shamefully refusing to be substituted in the 2019 final, and, secondly, for failing to make a single save and then skying the decisive spot-kick after being brought on solely for the shoot-out in the 2022 tournament decider against Liverpool.

They went on to install him as club captain so prematurely that it now looks as if he might lose it, while more clips of Bad Harry Maguire Defending than you can count have circulated on social media with the caption “What £80m gets you nowadays”.

It’s hard to not feel sorry for Maguire, really. He’s a better player than he’s shown in recent months but £80m heaped a bunch of pressure on him that he just hasn’t been able to handle.