Carli Lloyd, one of the stalwarts of the beautiful game and an icon for women in sports brought an end to her trailblazing career yesterday as she decided to hang up her boots. The versatile forward has multiple honours to her name, both on the club and international level. 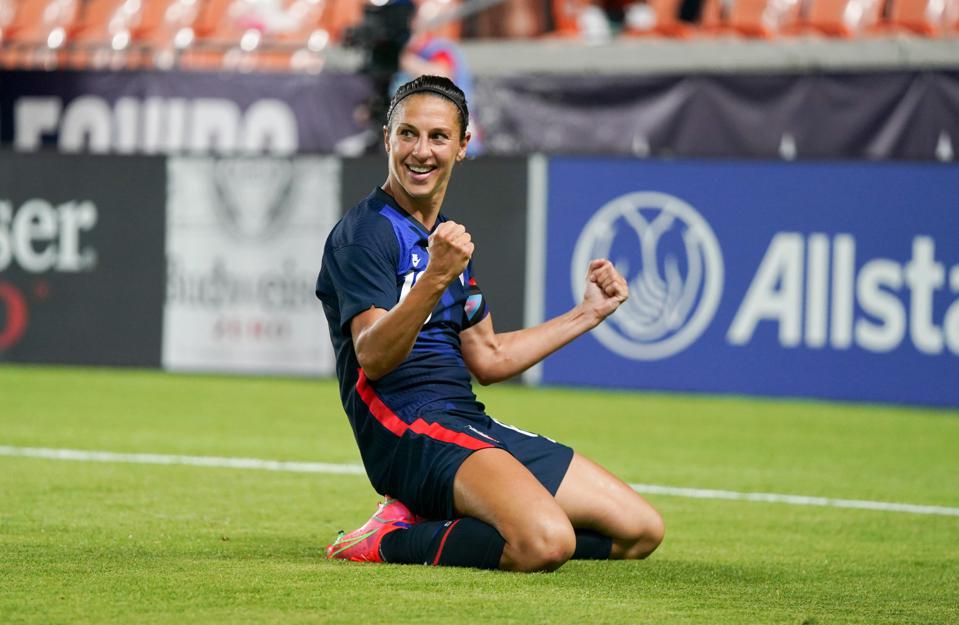 From scoring a hat-trick in a World Cup final to winning back-to-back Olympic gold medals in 2008 and 2012, Carli Lloyd has traversed a long way from when she began her career in football in 1999.

A legendary career comes to a close 🇺🇸🐐 @CarliLloyd has announced her retirement. The soon-to-be announced four #USWNT fall friendlies will be her final matches in a U.S. uniform, closing out a remarkable career. She will finish the @NWSL season with @GothamFC.

As the curtain draws on a glorious and glittering career spanning more than two decades, FootTheBall looks at and focuses on some of the iconic and defining moments of the American pioneer in football for women.

Not many people can say that they have represented their country more than 300 times in international football across tournaments and competitions at the highest level.

But, Carli Lloyd can say that she has worn the American colours on the pitch for USWNT more than 300 times across her decorated and glittering 22-year long career in football.

She reached this milestone earlier this year in a friendly with Sweden and became only the third American woman to achieve such a feat, following the likes of Kristine lily and Christine Pearce.

Her first ever match with the USWNT was in 2005, 15 years ago and ever since she has never looked back, going on to achieve hitherto unheard of success and glory with her national team on the pitch.

As new signings continue to occur in the landscape of women’s football, they will be weighed against Lloyd’s achievement of becoming the highest paid female football player in a landscape where not so long ago money wasn’t playing an important enough role.

Carli Lloyd became only the second football player ever since the inception of the beautiful game to score a hat-trick in a World Cup final. She achieved this feat when she scored a trio of goals in the 2015 World Cup final.

Only Geoff Hurst in the 1966 World Cup final has managed this feat. Lloyd scored two of the three goals in the opening five minutes against Japan as the USWNT triumphed 5-2 in Canada.

She deservingly was named as the player of the match and also collected the Golden Ball and the Silver Boot for her performances in the marquee tournament in North America.

For many players, just the prospect of representing their nation at the prestigious FIFA World Cup is an achievement to be proud of. But imagine winning two consecutive World Cup titles for your country.

Carli Lloyd achieved this unique feat after triumphs in the 2015 and 2019 World Cups staged in Canada and France respectively.

She took part in four World Cup tournaments in total and won four of them as the USWNT scripted history by becoming only the second women’s national football team to successfully defend its World Cup title.

And the dominance didn’t just stop there, as the US women’s national football team went on a winning spree in the Olympic Games too with Carli Lloyd leading the charge alongside Megan Rapinoe for the Americans.

She was the one who was decisive for the United States in both the Olympic gold medal matches in the Beijing 2008 and London 2012 Olympic Games as she scored the winners in both of these matches to lead the women’s team to glory.

Carli Lloyd also holds the distinguished record of being the U.S. women’s national team’s all-time top scorer in the Olympic Games. She has had a total of 10 goals at the Olympic Games for the United States over the years.

In the recently concluded Tokyo Olympic Games she scored a brace against Australia in the group stage that led her to the top of the scoring charts for the United States as the women’s team won the bronze medal in Japan.

Carli Lloyd also holds the record for scoring goals in the most number of consecutive matches at the FIFA World Cup matches across the span of her acclaimed career in football.

She became the first ever woman football player who scored in six straight Women’s World Cup matches when she scored goals against Thailand and Chile (x2) in the 2019 World Cup held in France in Western Europe.

8) OLDEST PLAYER TO REPRESENT THE USWNT

Carli Lloyd also holds the distinction of being the oldest player ever until now to represent the U.S. women’s national football team at the prestigious Olympic Games.

She recorded this amazing feat when she stepped on the pitch during the recently concluded Tokyo Olympics for the United States at the age of 39.

She ended up capping her spell with the United States women’s national football team in the Olympics with a bronze medal in the 2020 edition (staged this year in Japan).

After her exploits with the USWNT in 2015 in the World Cup in Canada, she was rightly adjudged the best female football player in the world as she led the United States to World Cup glory in Canada.

But, once more in the year 2016, she was adjudged the best female football player on the planet by FIFA as they handed it out the inaugural ‘The Best FIFA Women’s Player’ to the celebrated veteran player.

She also won the FA Women’s Cup with English club Manchester City, once again scoring for the Sky Blues as she led them to glory on the soil that is revered as the birthplace of football.

The match was played in front of a record sold-out crowd at the Wembley Stadium in London as the Cityzens triumphed and she added another feather in her cap.