With the Euro cup 2016 finally coming to a conclusion with Portugal taken redemption following their 2004 heartbreak against Greece in Lisbon, it’s France who have been left heartbroken this time round. But who were the top 10 performers of the competition. It’s time to look back in descending order and find out.

An integral part of the Polish lineup, his consistent involvement and solid performances must have been unfortunate for any fellow writers who would have had to write and check his spelling whilst covering Poland’s games. Despite not having been fit for the first game, no other player in the tournament made more tackles (20) than Blaszczykowski, along with creating a further nine chances, assisting one and scoring two himself. Essential to the team, statistics show that whenever he has scored, Poland have never lost a game.

Constantly moving, initiator of the Welsh attack, starting passing moves, always on the look out to receive the ball and providing cover for his defence, Allen showed such quality throughout the tournament that he was compared to the likes of Xavi and Pirlo. Manager Coleman also stated that he was one of the most reliable players on the pitch. With such performances, Liverpool will be now hoping that he can replicate the same in their upcoming Premier League campaign.

Being an all-round attacking midfielder, the fact that he was able to glide past challenges, have the vision to constantly provide clear through balls and possess the finishing ability to find the back of the net from range, De Bruyne was the key creative outlet for Belgium at Euro 2016. He created more chances than anyone else for his teammates (23) and provided 3 assists with one goal,making him the most efficient player in the final third. Manchester city will be pleased.

If the semi final defeat against eventual winners Portugal had to summed up, one thing that would definitely be mentioned is the fact that how badly Wales missed not having Ramsey in their starting 11. On so many occasions in the competition, he would bring the ball forward and have the awareness to bring others into play. Ramsey was eventually the tournament’s top assister with 4, created 15 chances and also scored a goal. Arsenal just like how Liverpool hopes on Allen, will be believing that Ramsey can produce the same quality throughout next season helping them do well in the Barclays Premier League and Uefa Champions League.

Having grabbed the award for the best single pass in the tournament while providing the stunning assist for Emanuelle Giaacherini’s goal against Belgium, Bonucci was the highlight performance in The Azzuri’s Euro campaign. Along with being firm as a rock in defence, his calm head also helped smash a penalty past Germany in the quarter-finals to give the Italians a chance. Sadly, it was not to be, but through the center backs performances, one got a very clear indication why Pep Guardiola is willing to pay a premium to get him to Manchester City.

After having been named as PSG’s new manager, Unai Emery didn’t waste time in snapping up Krychowiak as one of his first signings at the club. Such has been the impact that the Polish international had on Sevilla last season before continuing the performances at the Euro’s. Keeping everything organised and marshalling the Polish midfield whilst sitting just in front of the back four, Krychowiak provided a solid defensive shield and also scored the winning penalty to send Poland past Switzerland in the Round of 16. Defensively one of the strongest teams in the competition, Poland also had one of the best midfielders in the tournament in the form of Grzegorz Krychowiak.

Termed as the best player of the Group stages, Payet scored a cracking late winner against Romania in a nervy first match for France and followed it up with another late goal against Albania. Being able to drift inside from the left flank, the Frenchman was able create 21 chances throughout the tournament. His clever positioning and neat trickery allowed him to be at the heart of most French attacks and West ham will now be looking to prepare themselves for transfer offers from other clubs as they try and prevent their star player from leaving the club. 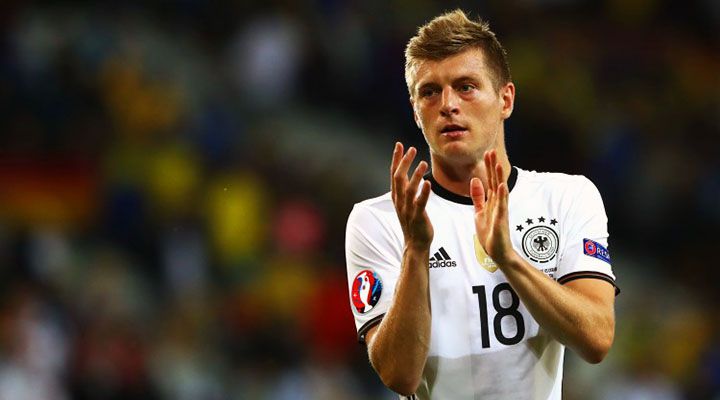 Termed as the most complete midfielder in the world, Kroos managed to live up to his expectations as he was the heartbeat of the German side that made it to the semi-finals of the tournament. Having made 642 passes at an average of 107 per game, with an accuracy of 92%, nobody was even close in terms of making passes or creating them. Throughout the completion, both his and Mesut Ozil’s dead balls allowed Germany to be a constant aerial threat to their opponents. His range of passing hasn’t been bettered by any other player in Euro 2016.

World most expensive player, can he perform for his country at the big stage? That was the doubt in everyone’s mind as Bale prepared with Wales ahead of the European championships. A month later, and every doubter has been proved wrong. A man who played for his team, scoring two brilliant free kicks whose unpredictable swerve and power got the better of both Matus Kuzacik and Joe Hart followed by a man of the match performance against Russia where he poked in the third goal of the night. The Madrid man also set up the devilish cross that forced Northern Ireland defender Gareth McAuley to put the ball in the back of his own net in the Round of 16 clash between the two neighbours. An influential performance against Belgium, helped Bale guide Wales into the semi-finals and record their best ever finish in football history.

Top scorer at Euro 2016 finishing with 6 goals, Griezmann fired France into the final of the competition and just couldn’t quite replicate the form when it mattered the most. Playing behind Olivier Giroud, he became the deadliest forward in the tournament, influencing others as well when not on the ball and that is why he is quite rightly ranked Number 1 in this list. His 2 assists and 1 goal against Iceland remains in his stand out performance with his double against Germany not far behind. Overall, he was unstoppable and it’s a great shame that his country could not go all the way and lift the trophy on their home turf in Paris.