With Uefa Euro 2016 having come to an end last month, FTB took time out to take you back through the roller coaster ride and remind you of 10 goals which must have left you astonished as they flew into the back of the net. It’s time to countdown the top ten goals of the tournament.

A striker who came into this tournament, representing his national team without having a football club to play for, has become hot property in the list of available free agents following his Euro 2016 performances. One such example can be of his striking ability skills, through which he sealed a semi-final spot for Wales, shattering all Belgian hearts with a decisive third goal.


After holding up the ball, Kanu did a 180 degree turn with the ball leaving all three Belgian defenders: Marouane Fellaini, Jason Denayer and Thomas Meunier wrong-footed before calmly slotting the ball past Thibaut Courtois. A goal worthy enough to start off this list.

Leading from the front as the captain and the country’s most valuable player, there were plenty of responsibilities lying on Hamsik’s shoulder heading into Euro 2016. After an opening defeat at the hands of a Gareth Bale inspired Wales, Slovakia headed into their second game with a must win situation. With the score poised at 1-1 with less than half an hour to play, Hamsik stunned Russia with a shot at such an acute angle to the left of the goal, that Akinfeev was left standing as the ball rebounded from the far post and went into the back of the net. The pace on the ball was measured to have been more than 60mph, such was the force with which the shot was taken. An absolute “blinder” in footballing terms. 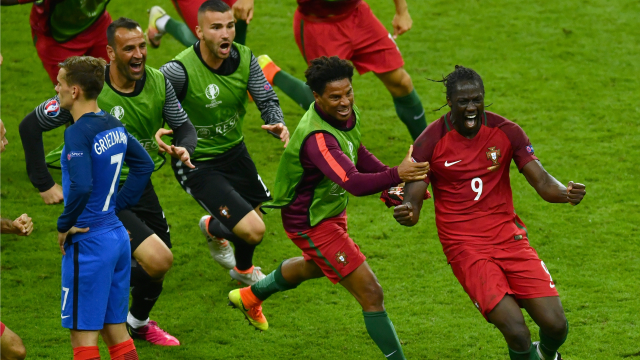 With Ronaldo ruled out within the first 20 minutes of the final, Portugal seemed on the back foot all throughout the game without creating many chances. As the game progressed into extra game, there was nothing much to choose from with both teams playing it safe and keeping their defence completely organised. But for one man on the pitch, who seemed like an unlikely hero, destiny had other plans.


With less than five minutes to go, Ederzito Antonio Macedo Lopes stepped up and made his name written down in history with a low shot from 27 yards out, that was so accurate and precise that even a goalkeeper of Hugo Lloris’s calibre could not stop it from finding the back of the net. 1-0 win and more importantly, the cup was Portugal’s.

Although the outcome of the tournament marked the end of Spain’s eight year reign as Europe’s champion, they definitely had a memorable final group stage game against Turkey thanks to their classic Tiki-Taka passing. 2-0 up and yet hungry for more, an Andres Iniesta initiated orchestra began with the ball going on to be passed to more than 7 different Spanish players on the pitch. The outcome, a goal to Morata’s name. Ranked 7th on the list, the goal defines how teamwork and confidence between each and every player can result in football seeming to be very simple with the outcome of a goal making it seem like icing on top of a cake.

Another goal which defines a result of quality teamwork, this specific goal marked the 100th of the tournament and helped France take a 5-2 victory over the hardworking Irish. In the buildup to the goal, Griezmann showed clear signs of opportunism which were equally matched by the visionary skills of a certain Paul Pogba. A long lob from the halfway line, found the feet of Olivier Giroud whose strength helped shield off the ball from Irish defenders before setting up Griezmann whose sublime run saw him clear in front of the goal splitting the final two defenders. Match this with a cool, cheeky street flick over the goalkeeper and accurate teamwork of passing was finally rounded off by a born finisher. At the end, yet another Griezmann moment of the tournament was defined.

With this match being the first of the tournament, France were not on the full throttle when it came to finishing off attacks. With nerves of playing on home turf getting to them, the French team and their blue army of fans needed a moment of brilliance to lift up their spirits against the Romanians. Late into the second half and the call was answered by none other than their in-form player Dimitri Payet. With magic in his mind, and perfect application being a quality of his left foot, he struck the ball from 25 yards out which curled into the top left corner sending the majority of the stadium into a revelation and the rest, into depression. With the timing and the quality of the goal contributing to a climax worthy for every French to remember long into the future, this goal deserves to be ranked within the Top 5 of the tournament. 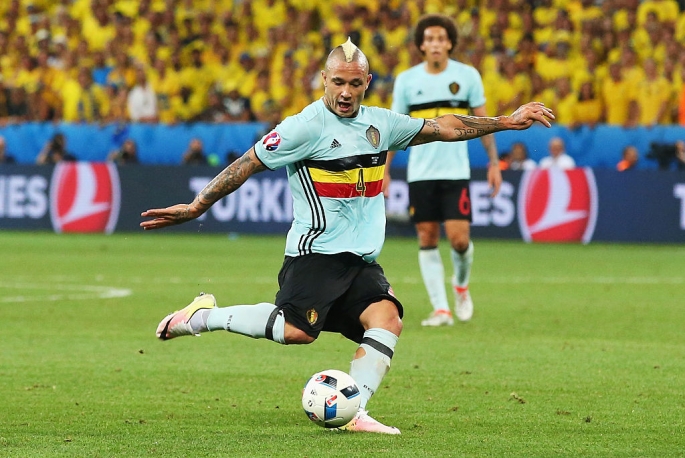 With his distinctive yet uniqueness of Tattoos and overall appearance matched with the uniqueness of the quality he possesses both on as well as off the ball during the game, it’s not very surprising that a Nianggolan Screamer has made it to the top 4. Known for his long range shooting abilities, the Belgian saw an opportunity early on in the quarter final clash against Wales, after the Welsh defence dropped back into the box allowing him acres of free space. 25 yards out, Radja set himself up and put his laces through the ball.

This might be the best goal of Euro 2016 so far. Radja Nainggolan with a laser! #EURO2016 pic.twitter.com/Ywi17EMdM7

The outcome, a goal put into the top right corner leaving everyone stunned. Such was the power behind the shot that even a 6 feet 6 inches Wayne Hennessey could not get his outstretched hand to the ball in time. The goalkeeper was beaten hands down, and everyone present was reminded of just what the “Ninja” is capable off. 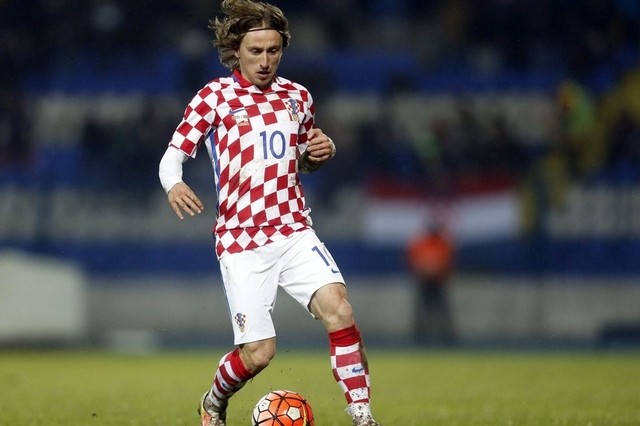 Considered as the dark horses of the tournament before being knocked out by eventual winners Portugal in their quarter final clash, the Croatians started off the campaign against a solid Turkish side. Such was the deployment from Fatih Terim, that his men seemed impossible to break down. But as they say, “Cometh the moment, Cometh the man”, the “little magician” who has established himself as one of the best midfielders in the world, had to be the one who changed the outcome of the game. With flawless technical quality, Modric struck the ball in the form of a volley from the outside of his right foot just outside the box. Such was the connection, that the ball flew into the bottom left corner and left the red and white chequered army electrified.


What made this goal even more special was the fact that Modric did not have a clear sight in front of goal as he went on to take the shot. Yet, he managed to be so precise in terms of both connection as well as placement of the ball. In the end, a deserved third in the list.

The tournament began and both Portugal and its skipper seemed to be off colour. Scrappy finishing with a missed penalty against Austria didn’t seem to make things any easy for one of the world’s best players. But with the world class quality that he possesses, it seemed like only a matter of time before his name would be in the score sheet. Bring on the final group stage clash against Hungary and that was Cristiano’s moment of rejuvenation. In a game best remembered to be a defensive shamble with goals leaking in from sides of the field, Portugal found themselves trailing 3-1. The goal which restored a one goal deficit was the one which is second in this list. A break from Portugal found Quaresma, whose cross seemed to be behind the sprinting Ronaldo as it came in. But that is when true class was shown. Sighting it to be behind him, Ronaldo adjusted himself to flick the ball from the heel of his right foot to guide it into the back of the net.


A goal to remember, and more importantly rediscovery of form for the skipper, who from then on guided Portugal to the crown of Uefa Euro 2016. 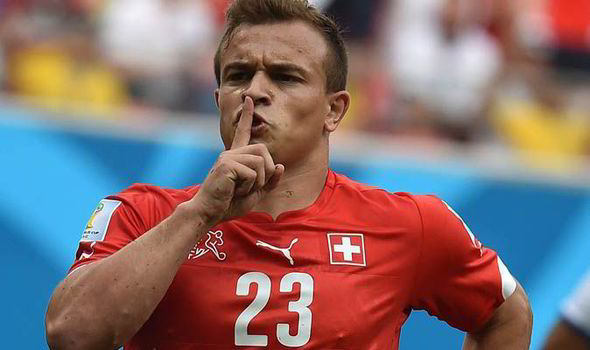 The title of the goal of the tournament had to be something different. In this case, it was an acrobatic leap which restored the score to 1-1 and gave Switzerland hope before they were eventually knocked out by the Polish during the penalties. But what a goal it was. As time was running out, the Swiss started throwing the kitchen sink at the Polish in order to draw level. In the midst of it all, a cross which came in from the right hand side, was met by a overhead scissor kick from the edge of the 18 yard box. The result, a goal into the roof of the net. Shaqiri had stated in the media, that they didn’t know him and what he had up his sleeve. After that goal, nobody seemed to question him. Neither will anyone question why this goal is Number 1 on the list, especially once they have watched it again.