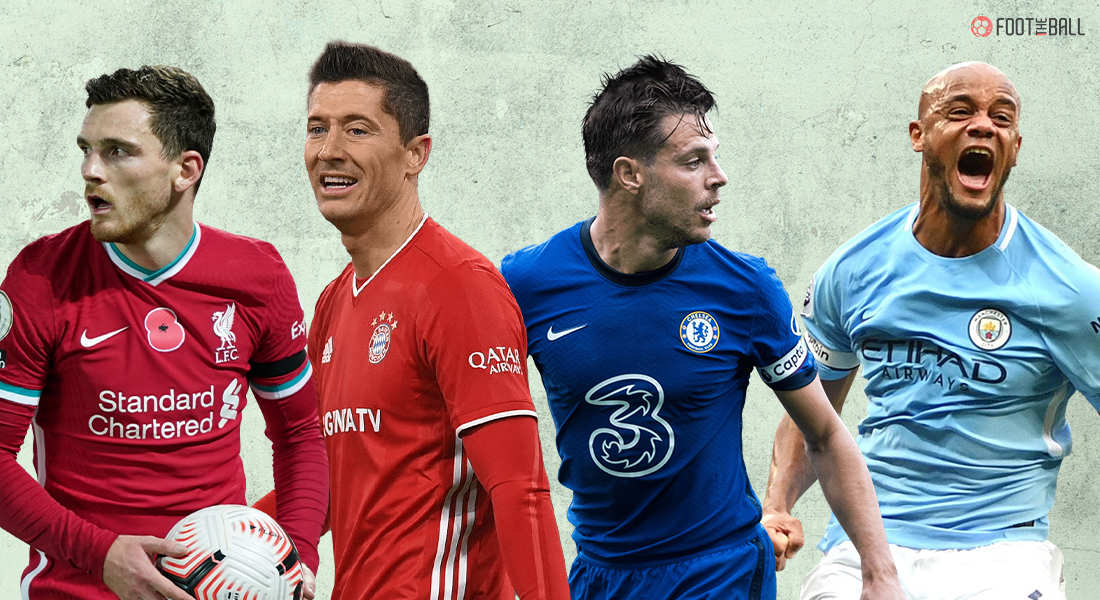 In recent times we have seen how teams are splashing big bucks for a lot of players to get their hands on silverware. Spending billions to acquire galacticos so that they can win trophies. But the transfer market is not just about having deep pockets. It’s about spending your pounds wisely and that’s what a lot of teams have done.

FootTheBall takes a look at the top-10 players who turned out dirt cheap for teams and how they were pivotal for their club’s success. From Bayern’s talismanic striker Robert Lewandowski to Chelsea’s Mr Reliable – Cesar Azpilicueta we have a look at the top-10 bargains in European football.

Buying a centre-back today might cost you nothing less than 80 or 90 million, ask Manchester United. But in the summer transfer window of 2008, Manchester City decided to bring in a tall, lanky, and towering defender from Hamburg. Vincent Kompany cost the Manchester club just 6 million pounds. And since the veterans’ arrival, Manchester City has turned into a reckoning force.

The 4-time Premier League-winning captain hung his boots a year ago. But his presence in City’s backline helped them land silverware at the Etihad stadium. And surely Vincent Kompany is synonymous with Manchester City’s name, a true leader on the pitch was surely a bargain for Citizens.

N’golo Kante, a name everyone is rooting for to conquer the Ballon d’Or. A household name all over the world, Kante has established himself to be the world’s best midfielder. But the Frenchman’s Premier League journey started with Leicester City. Winning the Premier League with the Foxes, Kante rose to fame as he was Leicester’s fulcrum in the center of the pitch.

Bought for a mere fee of 5.6 million pounds from Caen, Kante adopted himself to become a mouth-watering midfielder. And Leicester City’s roster was full of players who didn’t cost them a fortune and Kante was one of them. A versatile player, the young-smiling Frenchman is never tired of running on the football field.

Kante must be the best Premier League signing since Leicester signed Kante. #UCLFinal

A threat while defending, Kante can drive at rivals and score crucial goals for his team. And the current Champions League holder is nothing short of a warrior if his team is stuck in a tense situation.

Also termed as the Flying- Dutchman, Robin Van Persie had a glittering career in the Premier League. But his PL stint started at the Emirates stadium when he was bought by the Gunners for just 2.75 million pounds. The Dutchman’s career started at Feyenoord but unfortunately, he fell out with his manager at that time.

And then RVP decided to pack his bags and move to Arsenal. With 144 goals in the Premier League, Robin Van Persie established himself as one of the best players to have ever graced the PL.

Flamboyant skills and a kung-fu-kick is what describes Eric Cantona most prolifically. The French striker decided to find a new home in Manchester and played a pivotal role donning the famous red jersey. Cantona’s graceful role in the centre of the park ignited United’s career.

And with jaw-dropping performances week in and week out, Leeds did lose a legend in Cantona. Leeds United sold the Frenchman to the Red Devils for just 1.2 million pounds, surely a bargain. And Cantona soon turned out to be the King at the Theatre of Dreams.

Hull City fans were left in tears when they were unfortunately relegated in 2017. But one player who had attracted attention from all over the world was Andy Robertson. But the current leader of the Scottish team, Robertson has outperformed everyone in his left-back position. Robertson was purchased by Liverpool for just 8 million pounds and he’s called this century’s biggest bargain.

But at a point, Klopp’s army wasn’t fully ready for battle as they were looking for someone to replace Moreno. And then came in Robertson who led a revamp at Anfield. Since joining Liverpool, the Scottish has won a Premier League and a Champions League trophy.

Borussia Dortmund has served as an academy to German giants Bayern Munich. And one player that they swept in from BVB was talismanic striker Robert Lewandowski. The Polish striker first came to Dortmund for just 4 million pounds and was then sent to the Bavarians for free. Who would have known that he’ll turn into a total beast at Allianz Arena?

Lewandowski currently broke Gerd Muller’s record when he scored 41 goals in one Bundesliga season. He has netted an unbelievable 294 goals for Bayern Munich picking up 9 Bundesliga titles on his way. And Robert Lewandowski’s every campaign proves why Dortmund letting him for free was a foolish decision.

The Brazilian left his boyhood club Fluminese in 2006 to move to Spain. And since his arrival, Marcelo has captured trophies left and right. Playing a crucial role at left-back for Los Blancos, Marcelo turned out to be a legendary figure at Santiago Bernabeu.

He started becoming a regular at Real Madrid under Mourinho and soon started growing in structure. With some extraordinary skills, Marcelo helped Real Madrid win 20 titles. A reckoning force, Marcelo was the reason for Real Madrid winning so many UCL titles in the modern era.

Vieira was signed by the Gunners in 1996 after struggling to get into the main squad in Italy. He was an overnight sensation in the Premier League, and he proceeded to command Arsenal’s central game for decades.

Vieira, a major component of ‘The Invincibles,’ departed from Gunners with a huge amount of silverware. Under Arsene Wenger’s management and Vieira’s leadership, Arsenal lifted the FA Cup and the EPL trophy thrice. And the Gunners got all his services for just 3.5 million pounds. Endless goals, beautiful assists, prestigious trophies, and guiding leader for that price is too good of a deal.

Leicester City’s chariot needed a few wheels to lead them to glory. And one of the important wheels for the Foxes was Algerian winger Riyad Mahrez. His capability of cutting in and netting in swinging curlers didn’t go unnoticed as he was picked up by the eventual PL winners for just 400,000 pounds.

The 2015/16 PFA Player of the Year netted 17 goals while providing 10 crucial assists. His influence on the right-wing helped Vardy get more freedom who smashed in bangers day in and day out. Riyad Mahrez’s form has never dipped since his arrival as he went on to win a few more titles in England. And Mahrez is still an important part of Man City’s attacking roster.

After arriving in 2012 as an inexperienced defender, Azpilicueta has turned out to be an icon at Stamford Bridge. The captain just led his squad to the UEFA Champions League title yesterday. Not to forget that he has been crowned Champion of England twice with Chelsea and is a wall in Chelsea’s backline.

The Spaniard has missed very few games since his arrival to the Bridge and still remains to be the heart and soul of Chelsea’s and Tuchel’s roadmap. With more than 400 appearances for the Blues, Azpilicueta will go down as one of the best right-backs in business. Strong with both feet, Azpilicueta rarely loses possession or a tackle and is as dependable as a bank in defence.