One thing that makes ‘Football’ all the more exciting is undoubtedly the fans. From time to time players have insisted that they would be nothing without their fans. The amount of passion and devotion that the fans bring into the game is worth a round of thunderous applause.

And when talking about female fans – the atmosphere in the stands becomes all the more exciting with their electrifying presence – adding glamour to the sport with their customised outfits and most importantly their charismatic beauty.

Here are the Top 10 countries with the sexiest international football fans. 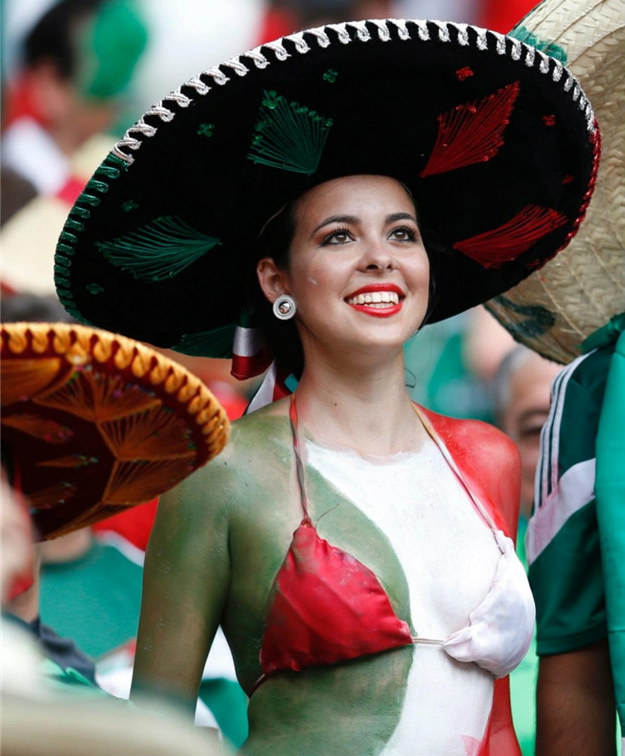 Mexico is not only known for the diversified cuisine which is hot and spicy. The nation has also documented their name among the top countries with the most enthusiastic football fans.

When talking about female fans, Mexico can pose stiff completion to any other football playing nations. 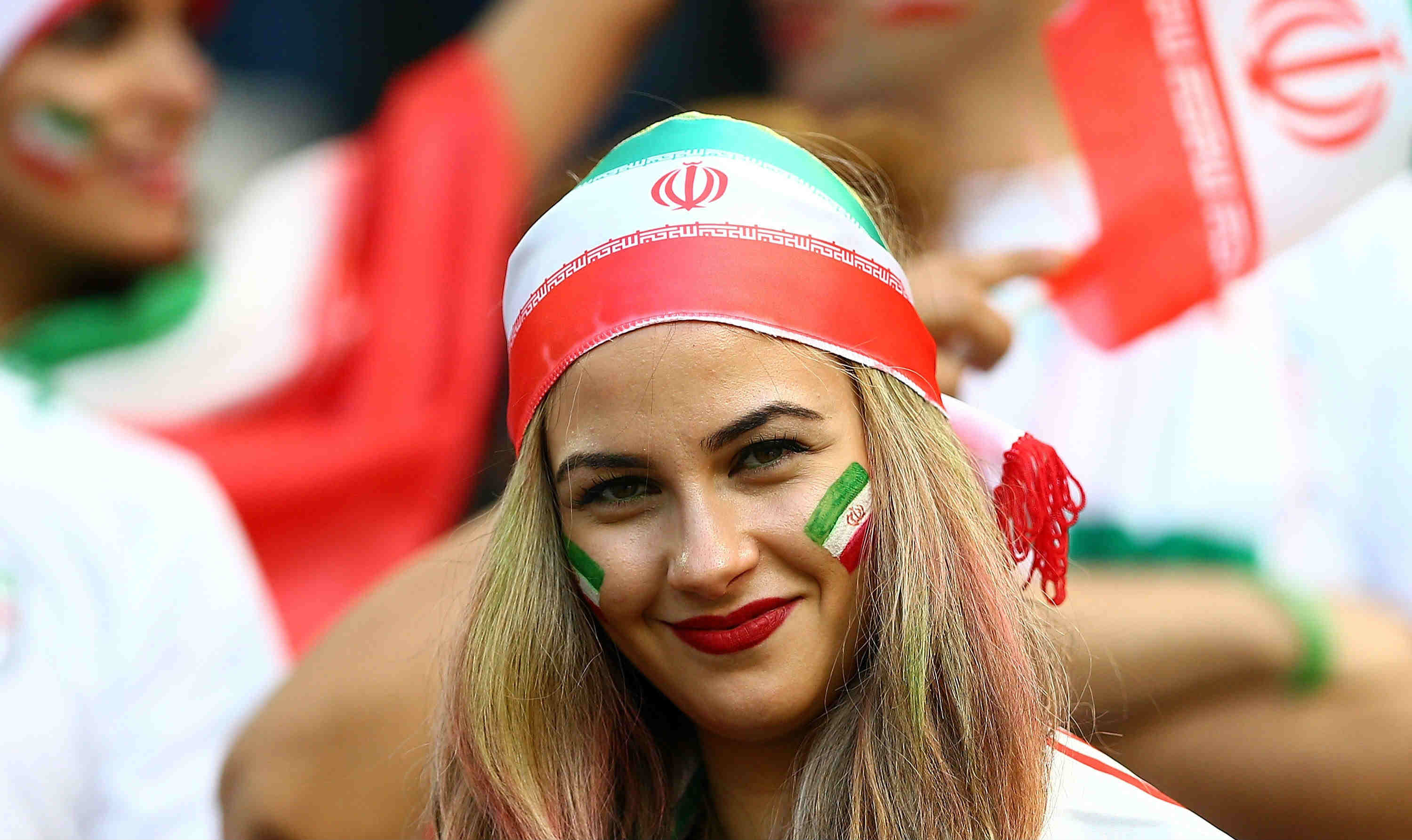 Always vocal about their opinion about players and from time to time they have surprised the footballing fraternity with their unique ways to show love for their team and players. 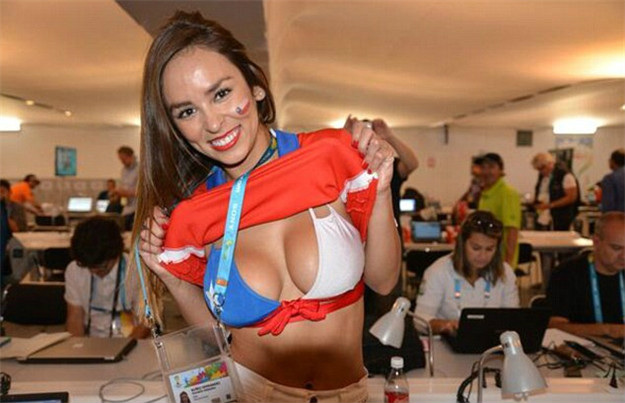 Chile brings a lot of aggression and passion on the field and are one of the most powerful South American side after clinching two consecutive Copa America titles – outplaying star-studded Argentina on both occasions in the final clash.

Chile has gifted the world with top-notch stars like Alexis Sanchez and Arturo Vidal, who are now at the top of their game. 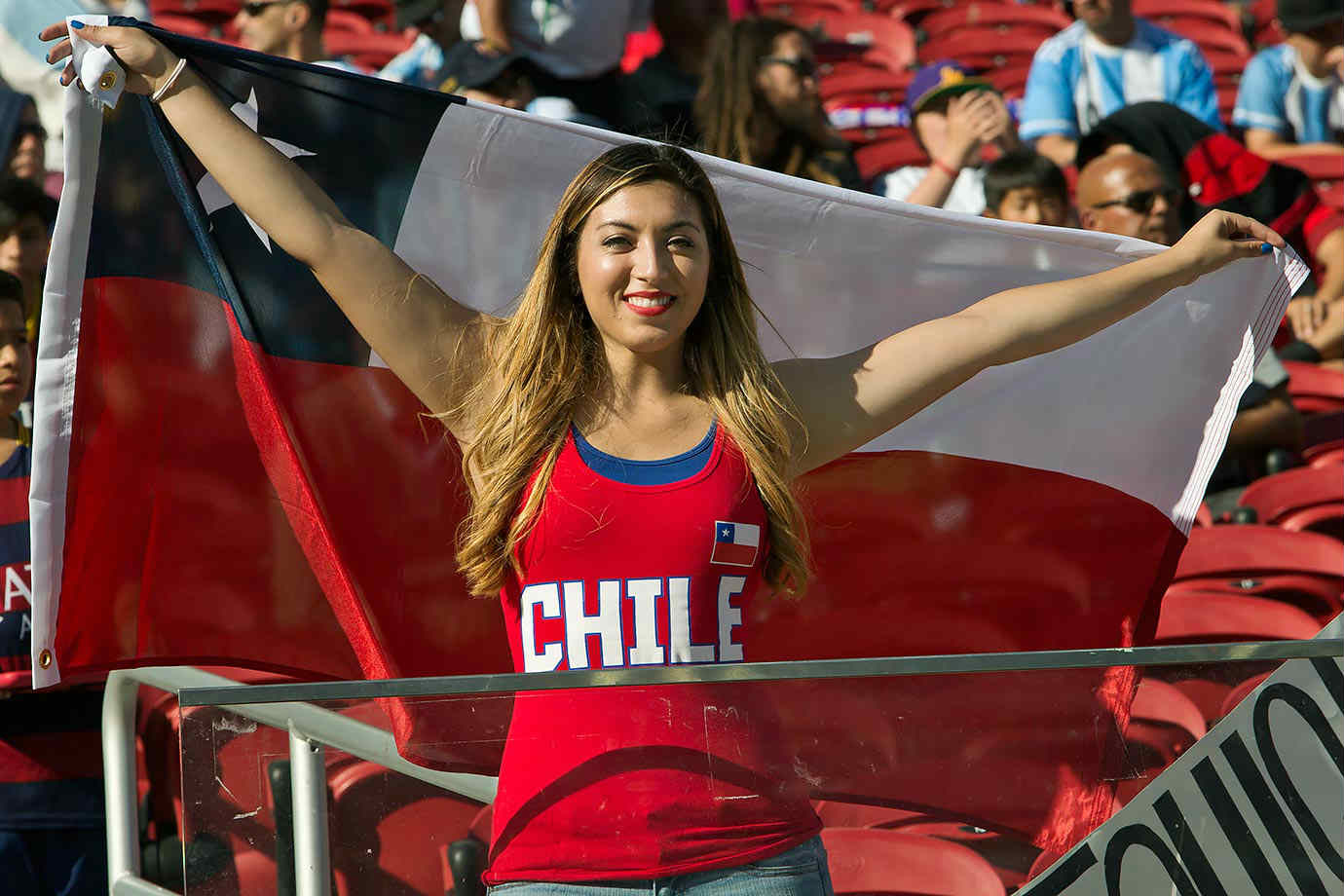 And Chilean female fans are never shy about showing their love for their stars – always rowdy, sizzling, exotic and truly stunning. 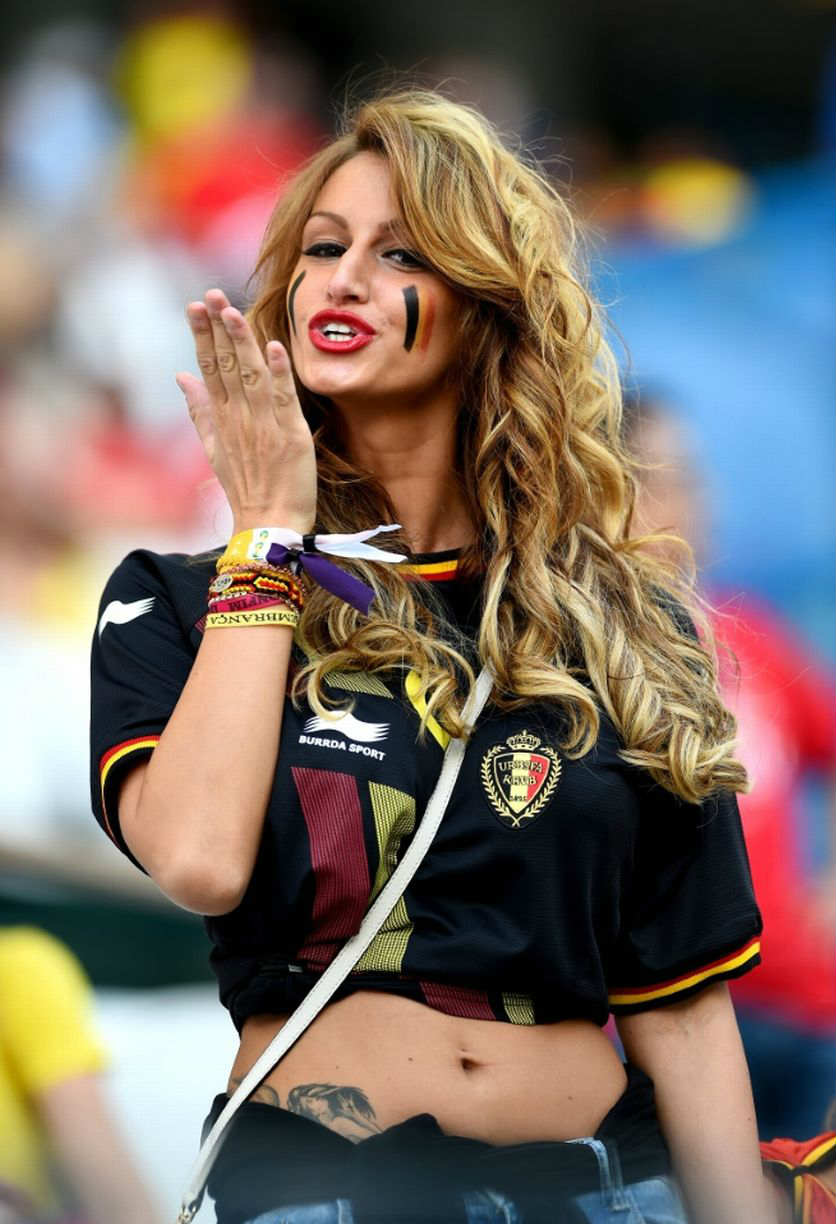 Currently ranked fifth in the FIFA World Rankings, Belgium are a side loaded with huge potential. Any top-flight team would have nightmares before facing the red, yellow and black brigade of Belgium – with stars like Eden Hazard, Romelu Lukaku, Benteke, Bathshuayi, Kevin De Bruyne, Fellaini, Witsel, Vermaelen, Thibaut Courtois, Kompany, Toby Alderweireld and others in the squad.

As if the players and their breathtaking skills weren’t enough to capture your attention, the Belgium ladies are truly stunning and one word to describe them would be ‘sexy’. 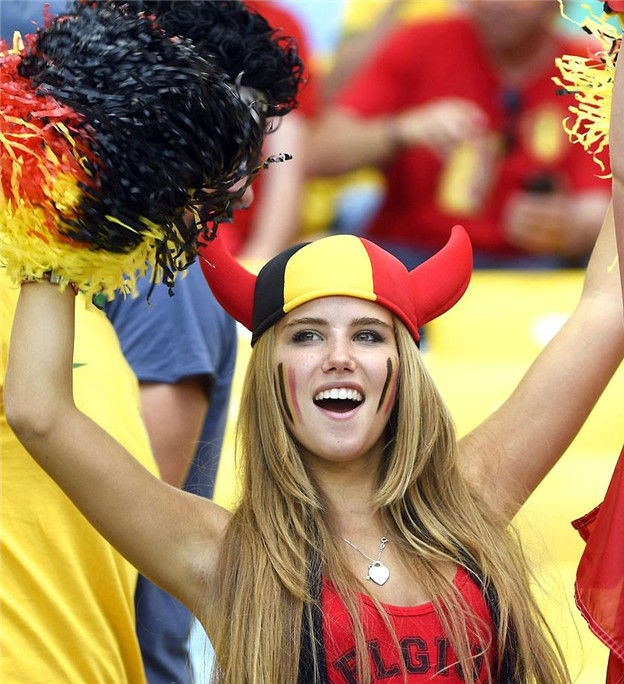 The Belgian female fans have always grabbed eyeballs for being the most colourful, vibrant and their witty ways of expressing love for their stars. They are one of the most exuberant fans in the world – always smiling a having a lot of fun. 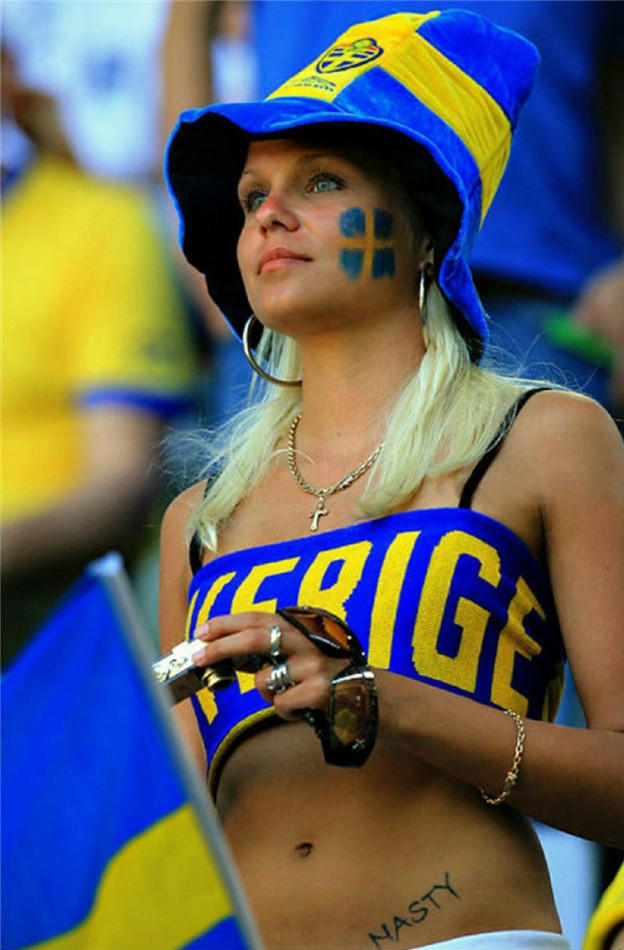 The nation that produced the ‘God Of Football’ – Zlatan Ibrahimovic, also boast about having the most beautiful and elegant female fans in the world. 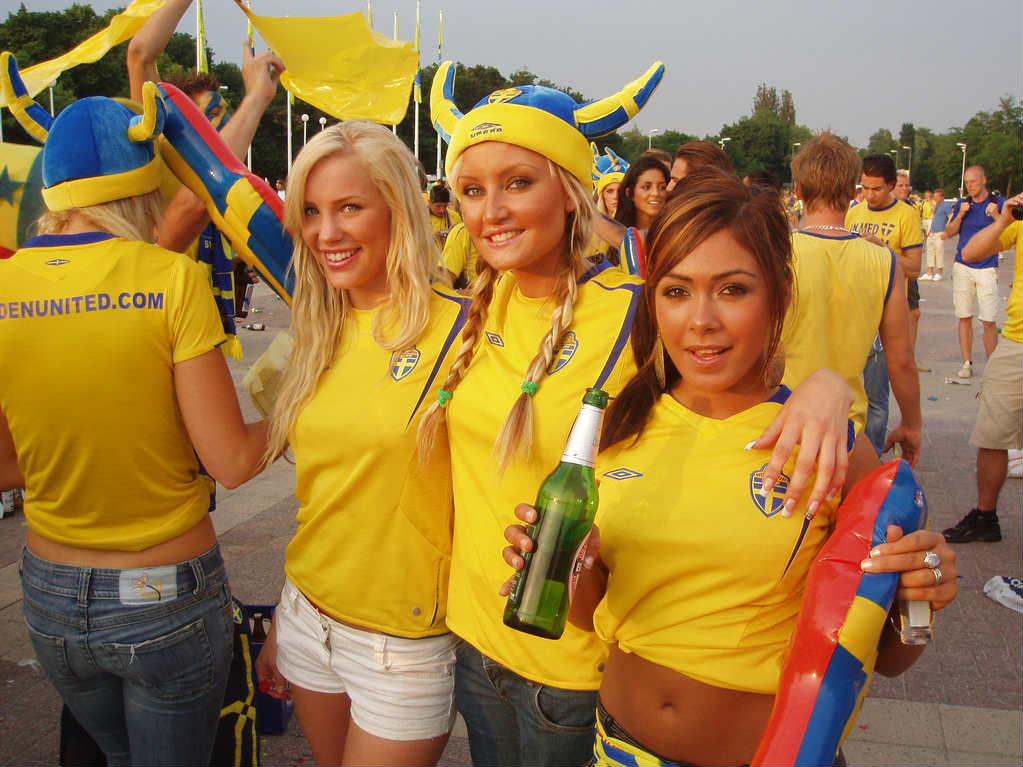 When you are watching Sweden in action on the field, one thing that will definitely catch your attention is the brigade of predominantly blonde beauties out in the stands – decked in the colour of their flag, shouting their lungs out to cheer their players – the perfect combination of beauty with brains. 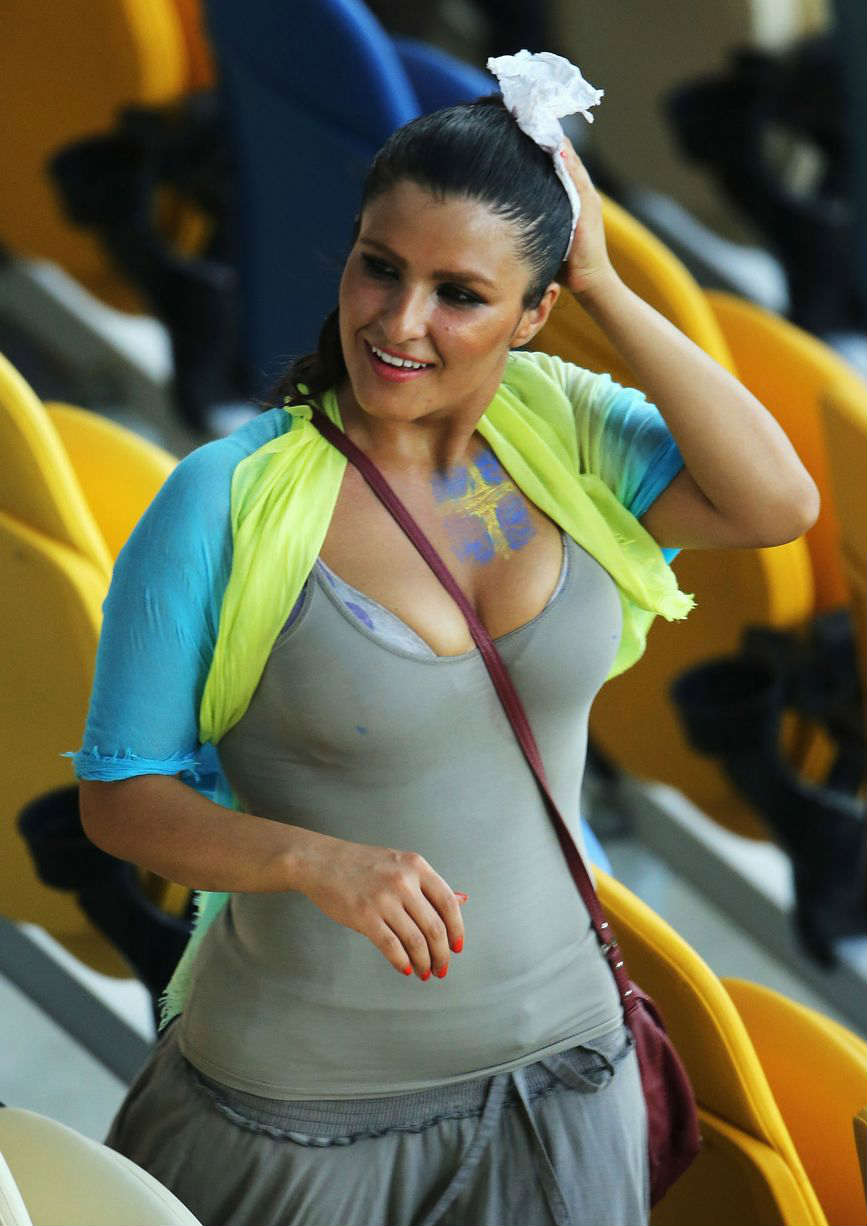 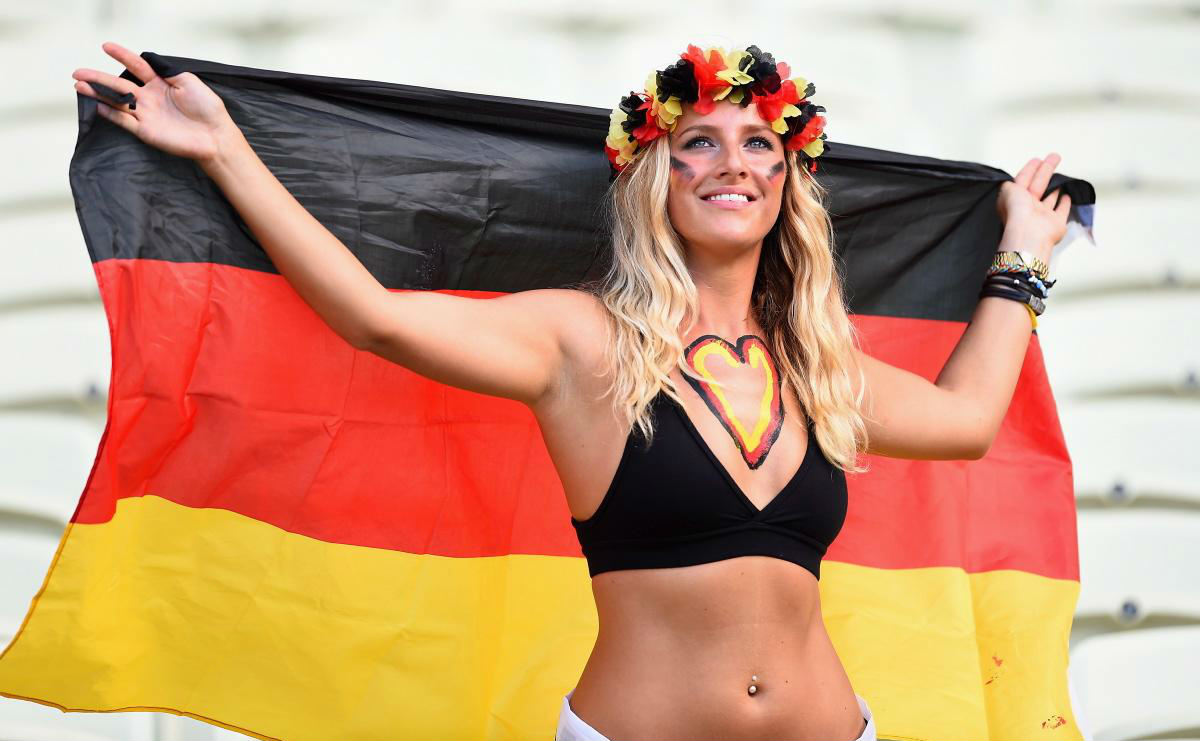 German female fans are known to be the most outspoken and stylish ones.

The current world Champions are considered to be one of the most powerful football playing nations in the history of the game. They have gifted the world with legendary footballers in the last six or seven decades and have uncountable records and titles to their name. And doing their part brilliantly are the brigade of female fans who have done well to keep up with the on-field achievements – always a step ahead with their indomitable passion for the game. 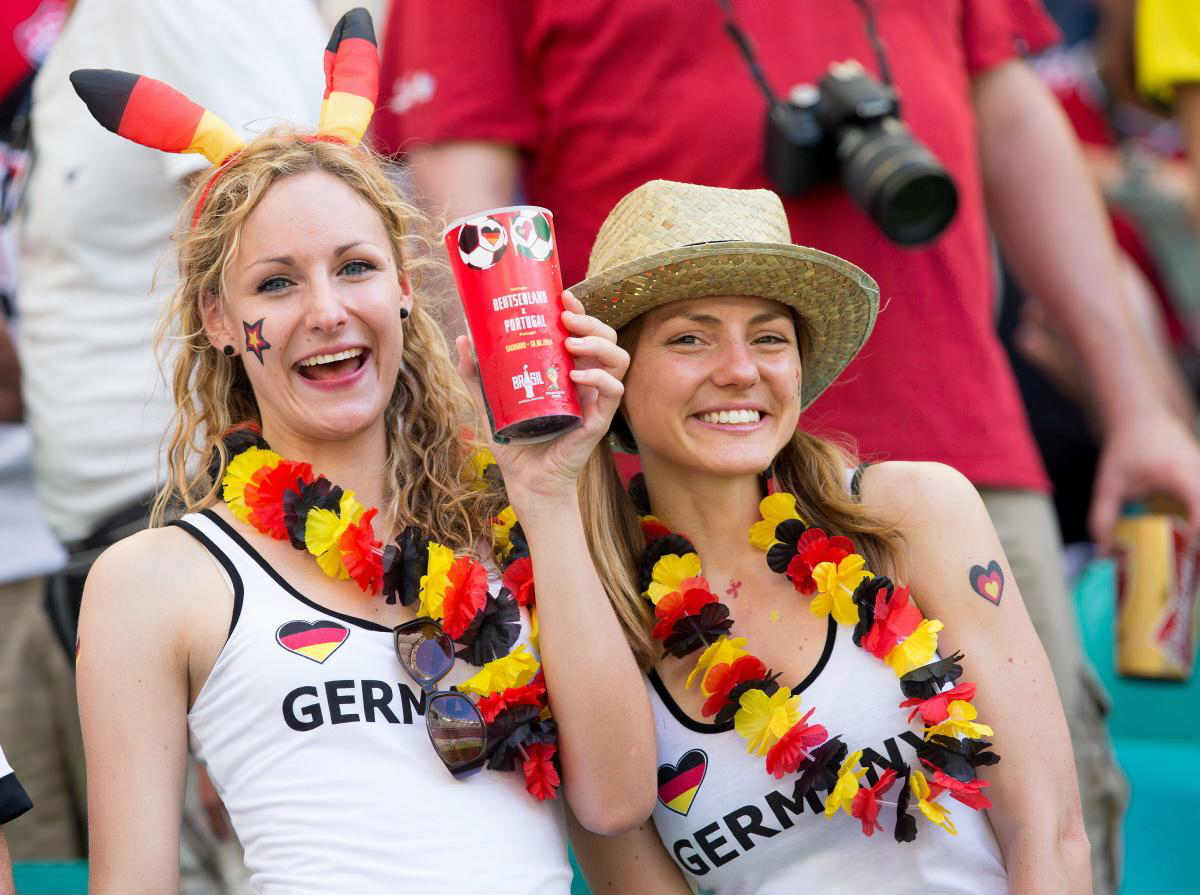 When it comes to dressing sense – no one can beat the German females who have a notorious reputation of sporting the most sexy and extraordinary outfits. 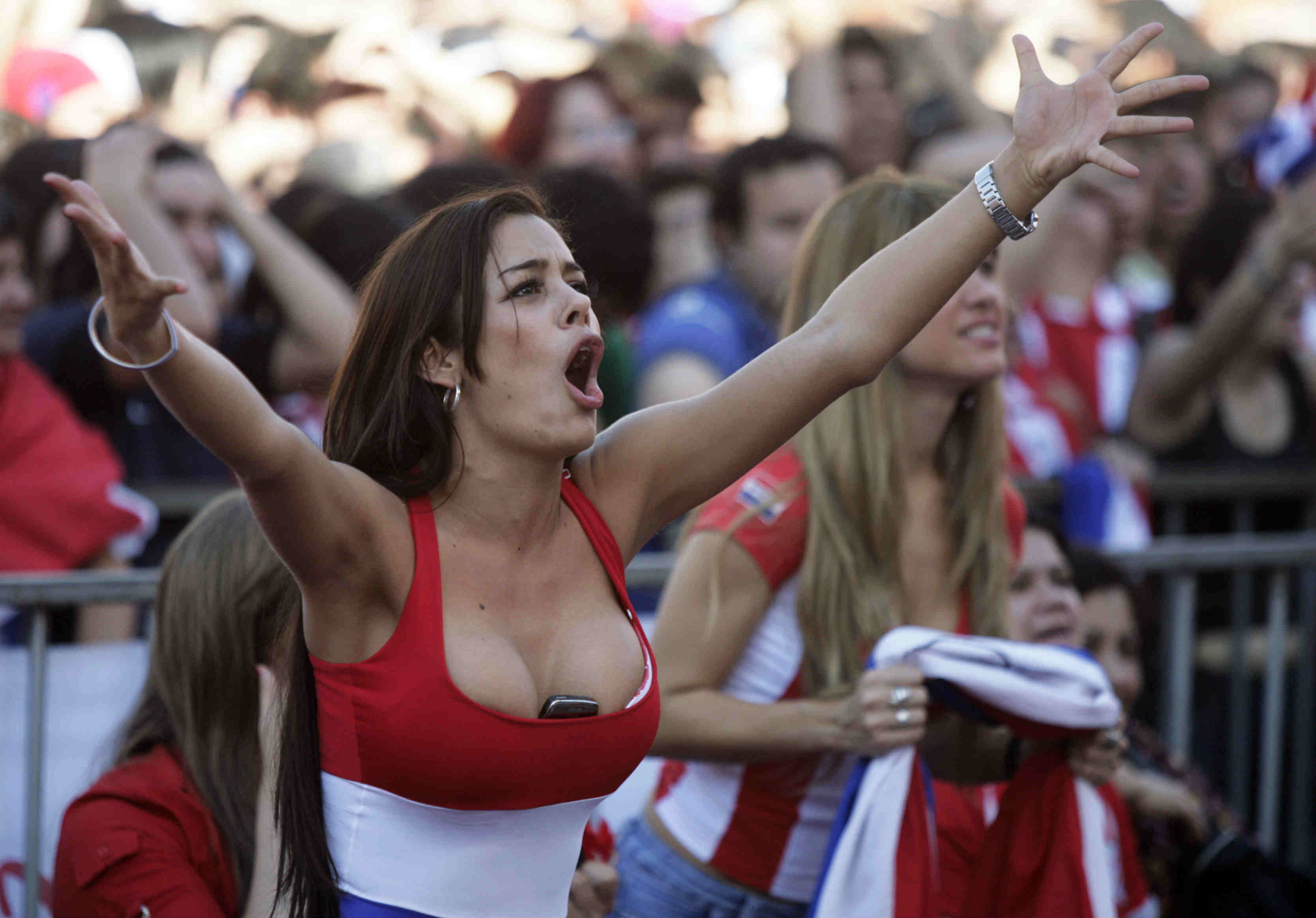 The nation with a never-say-die and fearless attitude both on and off the field, it is obvious that female fans here are the most bold and beautiful ones. The amount of glamour and oomph factor that they add to the sport with their perfectly toned bodies and their extremely attractive outfits is unquantifiable. 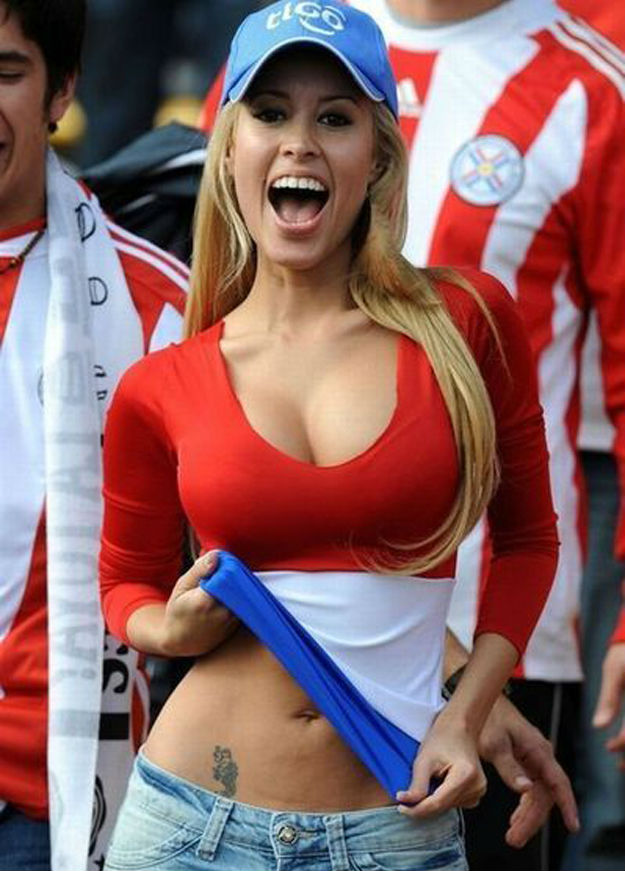 And leading the fan brigade is the extremely beautiful and the one with the perfect curves – Larissa Riquelme. 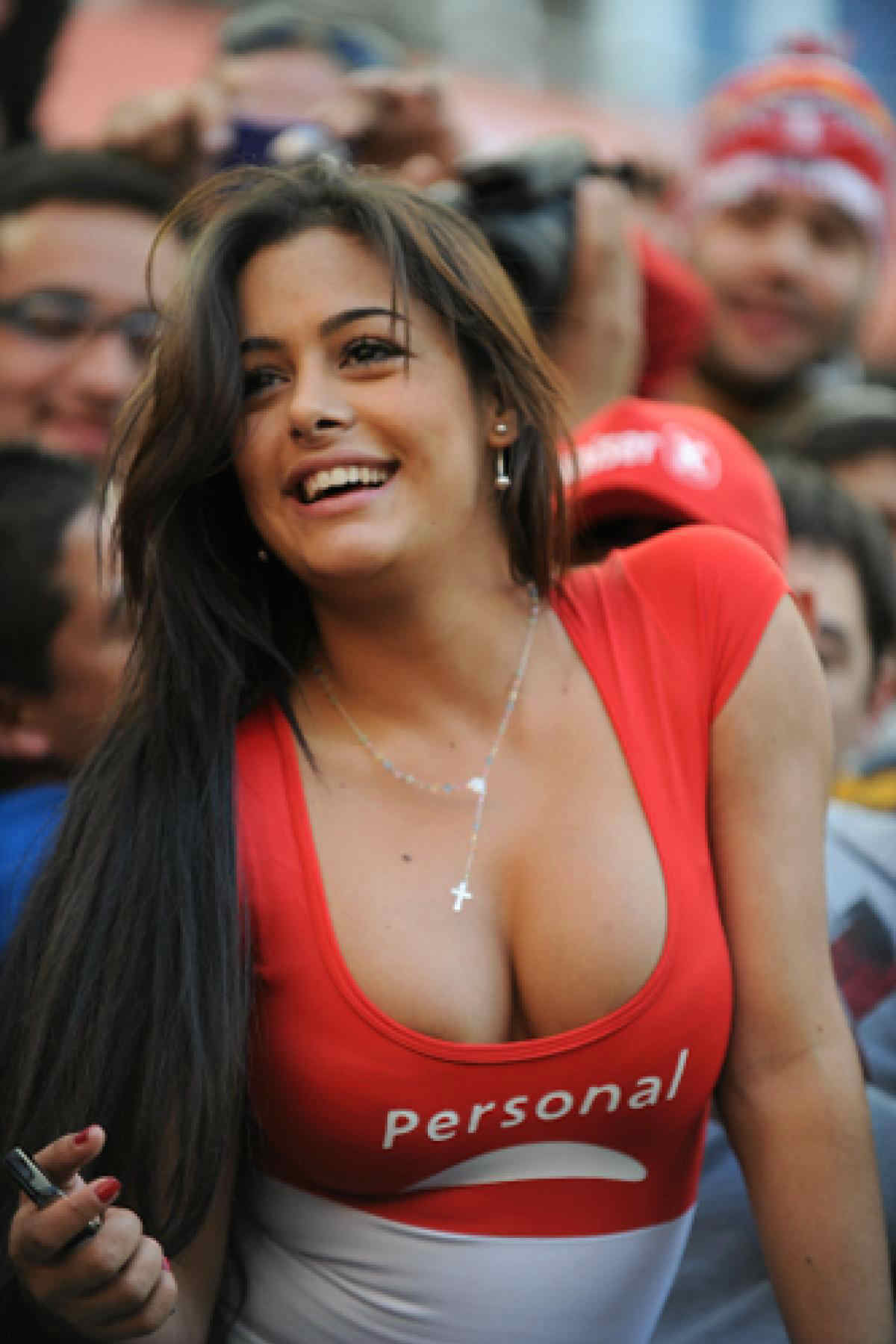 Larissa alone can divert your attention to the stands but she is just one of the many enthusiastic female fans from Paraguay, who can blow your mind and leave you screaming at the TV for taking the camera off the fans. They are currently ranked 40th in the FIFA World Rankings, but nothing can subdue the free-spirit, bold nature and the indomitable passion of their female fans. When you have footballing Legend Lionel Messi in your side, you cannot ask more entertainment but on rare occasions when the Barcelona star fails to fire, you can always keep you spirits high with a good show coming from the stands. 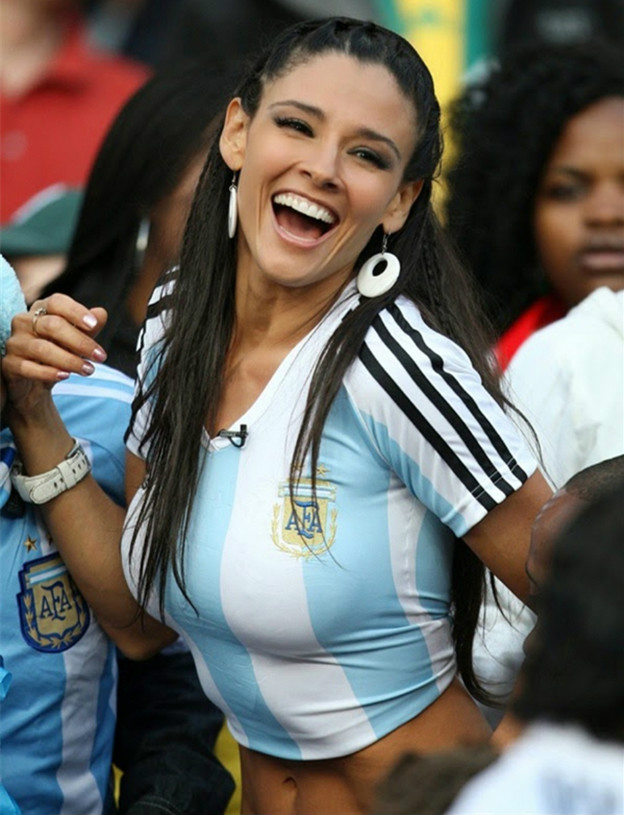 Argentine female fans are the perfect ‘Happy Go Lucky’ ones – always in a festive mood and will make you feel that you are at a carnival. Nothing can be more exciting to watch the five-time Ballon d’Or winner in action but it gets all the more exciting to see the ladies draped in blue and white, who are always outspoken and  exuberant. 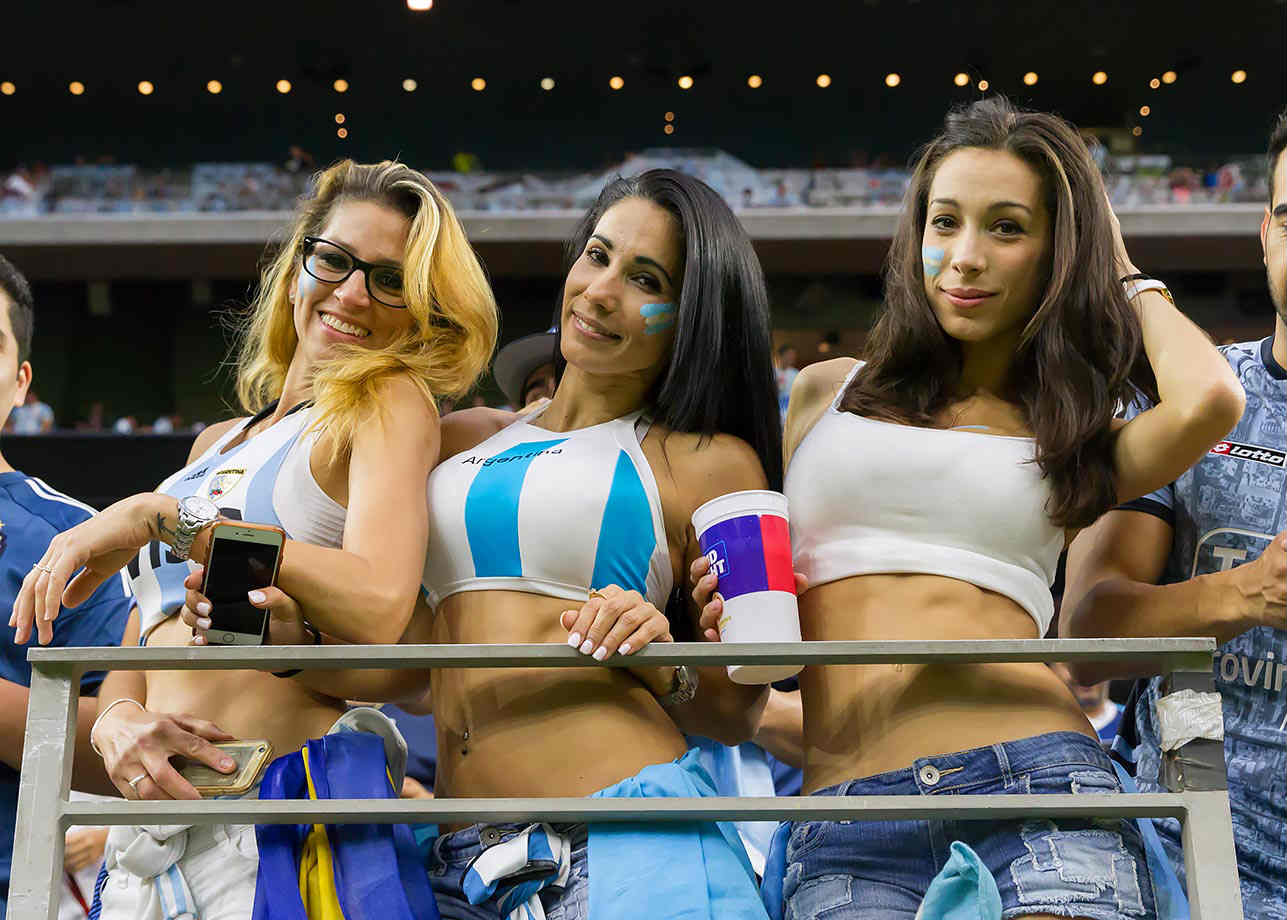 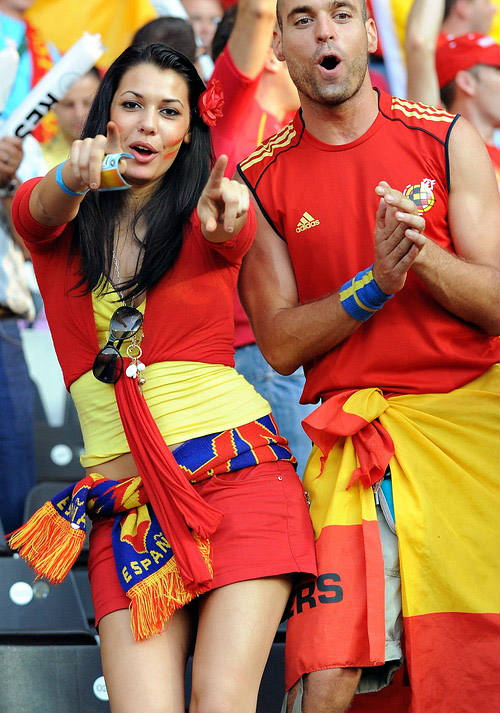 Female fans from a nation that has taken the footballing fraternity by storm in the last few decades are truly the epitome of beauty. Undoubtedly the brunette beauties have won a million hearts all over the world. From time to time they have struck the headlines for their bold outfits and wardrobe malfunctions during the international fixtures. 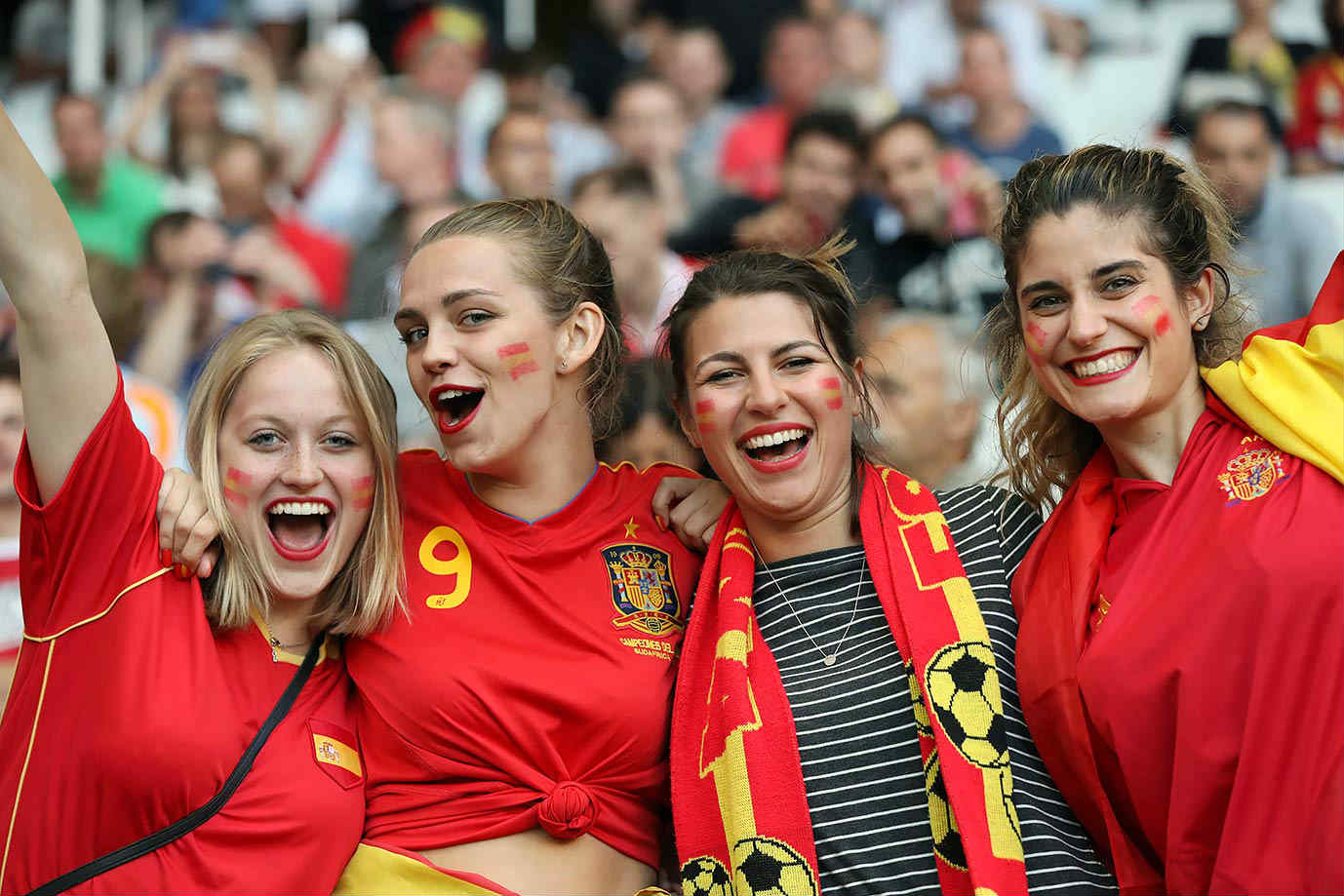 Despite their humiliating exit from the 2014 World Cup, these beautiful Spanish bombshells had a lot to cheer about in the recent past with back-to-back Euro Cup titles in 2008 and 2012 along with the World Cup title in 2010. Beautiful smiles, Dark Hair, Perfect curves and Full Cheeks… One cannot ask for more. Colombia have the reputation of being the dark horses on the international stage, but when it comes to entertainment – you are always guaranteed a festive mood in the stands, surrounded by female fans, who are the main attraction of any  match that feature Colombia. 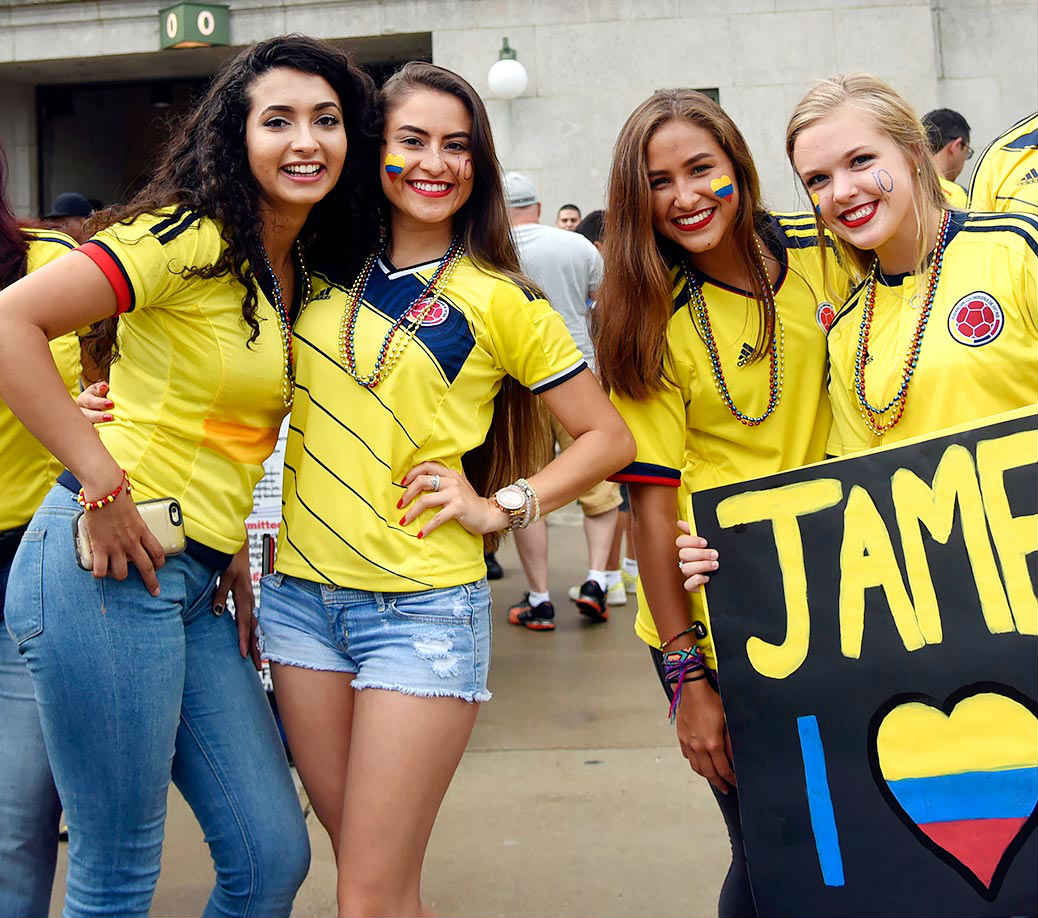 Always in their bright and sexy outfits, enough to knock any guy off their feet. They worship the sport and are always loud and vibrant while expressing their love for their players. 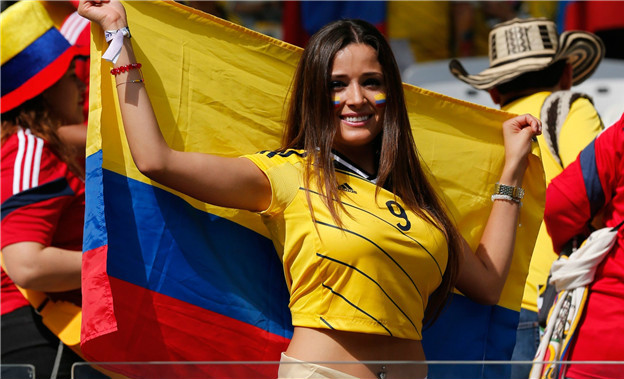 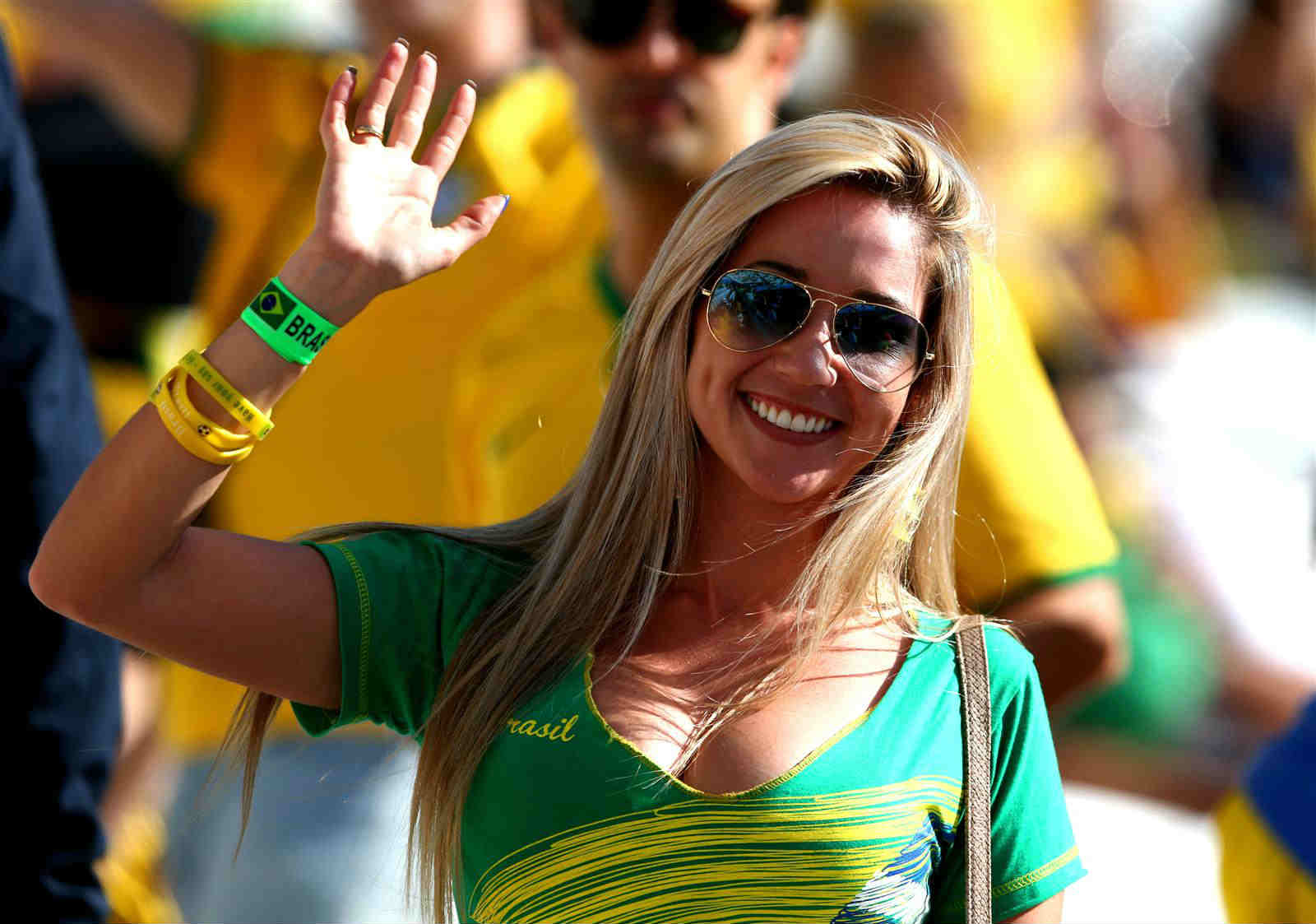 You just cannot take your eyes off the ‘Samba’ girls from nation where football is an integral part of their culture. The only country to have won the World Cup five times, and they are the only team to have played in every edition of the tournament. In Brazil you just do not head towards the stadium to witness your favourite football stars in action but to celebrate the game – with all the drum banging and booty shaking, that creates an atmosphere of never ending fun, irrespective of the fact whether they end up on the winning or the losing side.