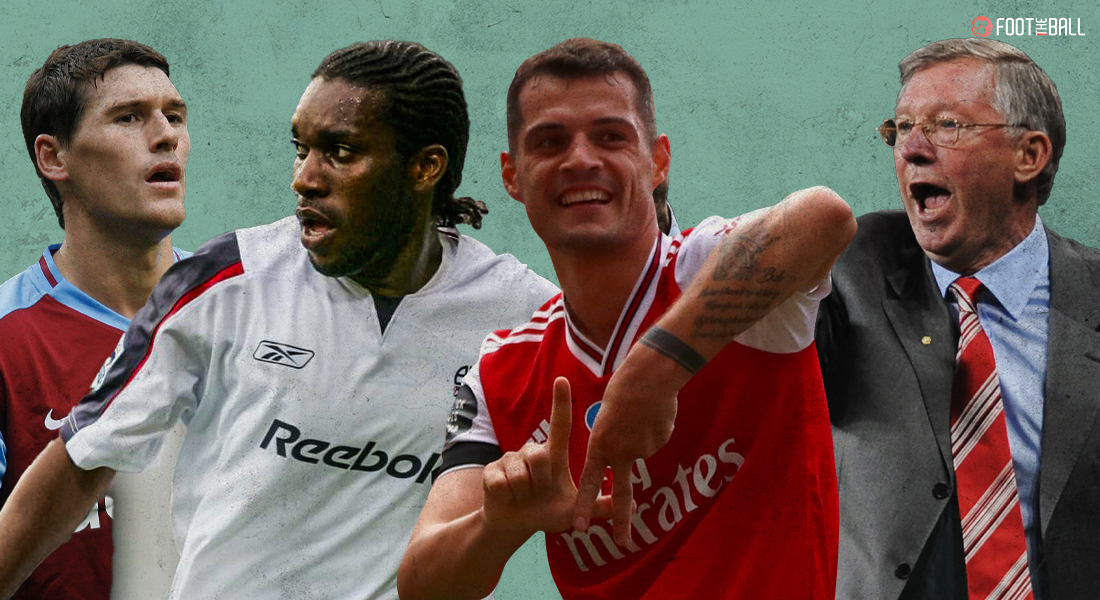 Christmas time is around the corner, and for the Premier League, it can only mean one thing. Yes, the absolute ludicrous results of the games held on Boxing Day, 1963. It has become a staple of the English game whenever the fixtures list moves into December.

But leaving that day and year aside for a minute, one may wonder what have been some of the less heralded but equally entertaining matches to be held on this auspicious day? Worry not, because FootTheBall has you covered. Here we present the top 10 Premier League games to be held on Boxing Day over the years and none of them are from 1963.

A game noteworthy, not for the result too much, but for what transpired at halftime. Hull were a top six side coming into the fixture while the Cityzens languished in the relegation zone. But the home side flew into a 4-0 lead before the break, with a brace each from Felipe Caicedo and Robinho, which led to one of the most spectacular scenes in Premier League history.

Hull’s manager Phil Brown gave a dressing down to his players on the pitch, in front of the away support, pointing and shouting vociferously. If the crowd that it would motivate the team, it did not happen as they fell to a very demoralizing defeat.

If the previous entry was chaos at the middle stage, this one had it right at the end. The Cherries reversed an early Hammers goal to lead 2-1 heading into the final 10 minutes. But striker Marko Arnautovic scored a quick brace to all but make sure of the three points for the away side. Then, with the clock into injury time, Callum Wilson bundled a cross into the net before he was pulled up for offside by the linesman.

However, referee Bobby Madley, after chatting with his assistant, overturned the original decision and allowed the goal to stand. Replays showed that Wilson was indeed off and also possibly used his arm to guide the ball into the net.

Yes, you read it right. The same Coventry who had years of struggle and mismanagement in recent times before now battling to get promoted to the top flight. Back in the late 90s, they were a really dominant force as is evident here. Nevertheless, this result was still a huge surprise with Arsenal being the defending champions and Arsene Wenger well on his way to become a top manager of his time.

The striker scored the winner against Arsenal, in a 3-2 win at Highfield Road! #PUSB #CCFCGOTD pic.twitter.com/w9wqbZix8J

But the Sky Blues ran amok with goals from Mustapha Hadji, Gary McAllister and a young Robbie Keane sealing the victory for Gordon Strachan’s side. One of the biggest surprises in Boxing Day history, especially given how the future trajectories of the pair panned out.

Not the first time the Red Devils would feature on this list or the circumstances in which they would win. The maiden Premier League season was well on its way to be a cracker and certainly the hosts were buoyed at halftime. A 3-0 lead for the home side, with Chris Waddle in terrific form, left United destined for certain defeat.

However, the moniker of the ‘comeback kings’ would write one of its very first chapters in the second half as a double from Brian McClair brought the away side close to leveling. With time running out, it was Eric Cantona who rescued a point and proved that United were no fluke in the title race. Indeed, they would go onto lift their first league crown in 26 years at season’s end.

A game the home side nearly threw away before clinging on at the end. Jay-Jay Okocha gave Bolton the lead but Alan Shearer equalised almost immediately. But the Magpies proceeded to concede three on the bounce highlighted by Ricardo Gardner’s supreme free-kick.

However, the comeback seemed to be on as first Shola Ameobi and then Shearer again chipped away at the deficit. The away side could not manage to find a fourth though as the curtains came down on another thrilling encounter for the Boxing Day lovers around.

The second time the Gunners find themselves on the list, and again, not the best of afternoons. The Villans were a top team back then under Martin O’Neill, known for giving the better sides a strong fight. But they were 2-0 down after less than five minutes of the second half and looked to be heading for a loss.

Perhaps Arsenal got too comfortable for their own good as they conspired to throw the game away. A penalty from Gareth Barry halved the deficit before centre-back Zat Knight rifled the ball home in the final minute of the game to earn a share of the spoils for the home side.

David Moyes’ only Boxing Day fixture with United and it could not have started off worse. The lowly Tigers took a 2-0 lead within 15 minutes, thanks to James Chester and David Meyler. The joy was short lived for the hosts as the Red Devils were level within the next 15 minutes.

Chris Smalling and a thunderous volley from Wayne Rooney coming to the fore. The second half was a cagey affair that was settled through the misfortune of the opening goalscorer. Chester headed a cross from Antonio Valencia into his own net to seal the result in an entertaining if uneven game.

Fortune finally shined brightly on Gunners and made it sweeter as it came on the first anniversary of Mikel Arteta’s reign. Arsenal were hovering above the relegation places while Chelsea looked to break into the top three. Frank Lampard’s hopes were dashed past the half hour mark when Alexandre Lacazette converted from the spot, though the awarding looked harsh.

However, there was no doubt about the second goal which was a thing of beauty from a Granit Xhaka free-kick to give the hosts a 2-0 lead at halftime. Bukayo Saka added a freaky third when his cross evaded everyone and landed directly into the net. Tammy Abraham’s late goal was only a consolation for the away side who underperformed on expectations massively.

Some familiar storylines emerged for both sides. The Red Devils ushered the final Boxing Day fixture of Sir Alex Ferguson with a classic rendition of Fergie Time. Newcastle, meanwhile, endured yet another loss in this fixture. The match saw the visitors go ahead through James Perch before Johnny Evans equalised, who later deflected a shot into his own net for a surprise 2-1 lead at halftime for the Magpies.

Patrice Evra got the score to 2-2 but Papiss Cisse restored the lead again. Robin van Persie, the savior in so many games that season, scored his side’s third with 12 minutes remaining. Just when it looked like a draw was on the cards, up stepped Javier ‘Chicharito’ Hernandez, a man known for his winning exploits. The Mexican struck a winner for the ages to snatch yet another three points.

The second time for each of these sides on the list, who served up an instant classic for the ages. Shaun Maloney scored a quickfire brace to put Villa 2-0 up, the second goal aided by poor goalkeeping from Petr Cech. Andriy Shevchenko got one back from a penalty before halftime and struck again after the break to restore parity. The Ukrainian striker got the assist for the game’s fifth goal for Blues defender Alex.

The lead was short lived as Martin Laursen equalised again. A peach of a free-kick from Michael Ballack just two minutes from time looked to have sealed the victory for Avram Grant’s side. However, left-back Ashley Cole became the villain of Stamford Bridge as he handled a ball inside the box. Gareth Barry made no mistake to bring a topsy turvy game to a fitting conclusion.