One of the most underrated strikers in world football, Olivier Giroud is set to leave Chelsea this transfer window, as the Frenchman moves to Italian giants AC Milan in a deal worth £1.7 million.

Although his contract was extended by another year after their Champions League victory, it was evident that he had to move on from Stamford Bridge for more game time and has chosen the Rossoneri as his next destination.

It has been a roller coaster ride for the former Arsenal striker in the Premier League after first joining the Gunners in 2012 from Ligue 1 side Montpellier. He managed to score 105 goals in 253 appearances for the club before moving South-west to join rivals, Chelsea, in the winter of 2018 in a deal worth £18 million.

With the Blues, he has managed to find the net 39 times in 119 appearances and has gone on to lift the FA Cup, the Champions League, and the Europa League, under three different managers.

To all the Blues, to my teammates, to all my coaches, to the whole club, a huge thank you for these special moments 🙏🏼

I'm starting a new journey with a light and happy heart. Our victories in Fa Cup, Europa League and Champions league have been magnificent. 🤩

As he leaves England after nine years, FootTheBall is here to look back at ten of his best moments that had lit up the Premier League.

Known for his acrobatic as well as aerial ability, on the evidence of this goal, Giroud could have an alternative career as a dancer after his footballing days.

A floated ball in by Mesut Ozil was slightly too far behind Giroud, who managed to re-adjust his body position as the cross arrived at pace and connect with a left-footed scissor kick, leaving Palace keeper Wayne Hennessey with no chance to save it.

In what was one of the Premier League blockbuster opening fixtures, the Gunners defeated the Foxes in a 4-3 comeback win in which the Frenchman had the last laugh.

Arsenal took an early lead through Alexandre Lacazette in the 2nd minute, but Leicester struck back to take a 3-2 lead at half-time. The game looked like going in favour of the Foxes, but it was the substitutes, Aaron Ramsey and Olivier Giroud, who were the heroes at the Emirates after both of them scored in the space of two minutes to give the Gunners a memorable win.

Although Giroud and Arsenal went on to lose against Manchester United in a 2-1 affair, the goal scored by the Frenchman was a spectacular finish, a half-volley from outside the box into the top left corner.

It was partly helped by David de Gea; however, it was still a goal that displayed magnificent technique and could have been a winner if Giroud’s fellow attackers could have somehow scored from the previous 22 shots on goal as they were so wasteful in front of goal on that rainy night.

It might sound unremarkable, but Giroud’s double, which were his first Premier League goals for Chelsea, either side of an Eden Hazard strike hauled the Blues to a late 3-2 victory at St Mary’s in the final days of Antonio Conte’s reign at Stamford Bridge. Giroud and the team celebrating with the fans after completing the comeback against the Saints. (Image Courtesy: Guardian / Website)

It was a sumptuous header for his first goal that brought back Chelsea into the game before Hazard equalised after being 2-0 down until the 70th minute. Giroud won it for the Blues with a fine winner on the half-volley, snatching away the three points from the Saints in an eight-minute blitz.

Eight days after his heroics in the league, Olivier Giroud continued to haunt Southampton, now in the FA Cup semi-final as Chelsea went on to book a place in the final after defeating the Saints in a 2-0 affair.

But it was the Frenchman’s goal that took everyone by surprise as Giroud skipped past the opposition defenders with ease as if they were just training cones, leaving them with broken ankles before calmly chipping past the Saints keeper.

Although it was only the Europa League, the match against Dynamo Kyiv was a testament to the Frenchman’s all-round ability as he went on to score with his left foot, with his right foot, and finished off with a header in a 5-0 victory, in which he also had an assist. 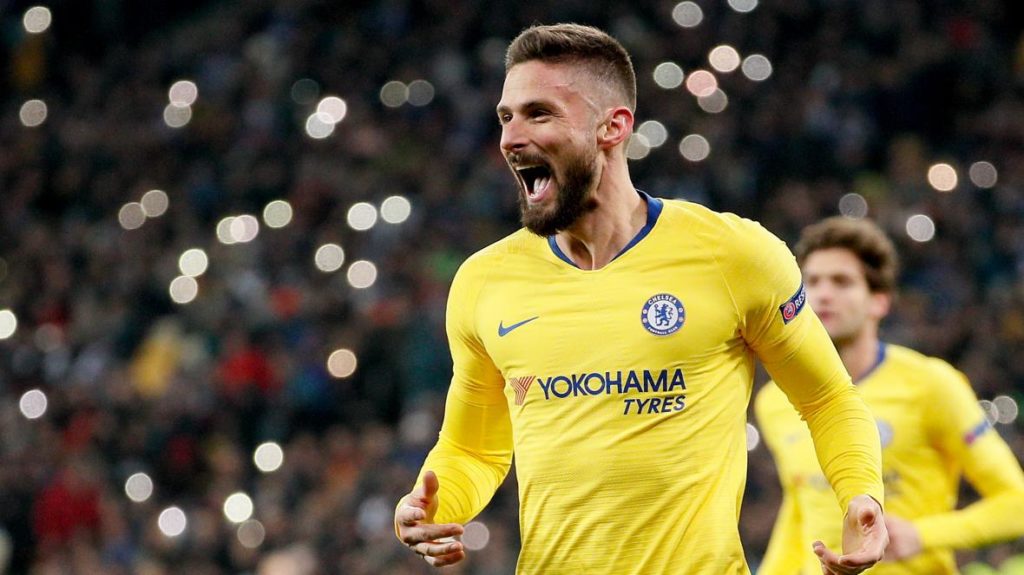 The perfect hattrick, a first in his career certainly helped him finish as the tournament’s top scorer as Chelsea won the Europa League that year, for the second time in their history.

It was a match that epitomised what Arsenal had lost 18 months earlier and what Chelsea gained from their city rivals for a modest fee of £18 million. 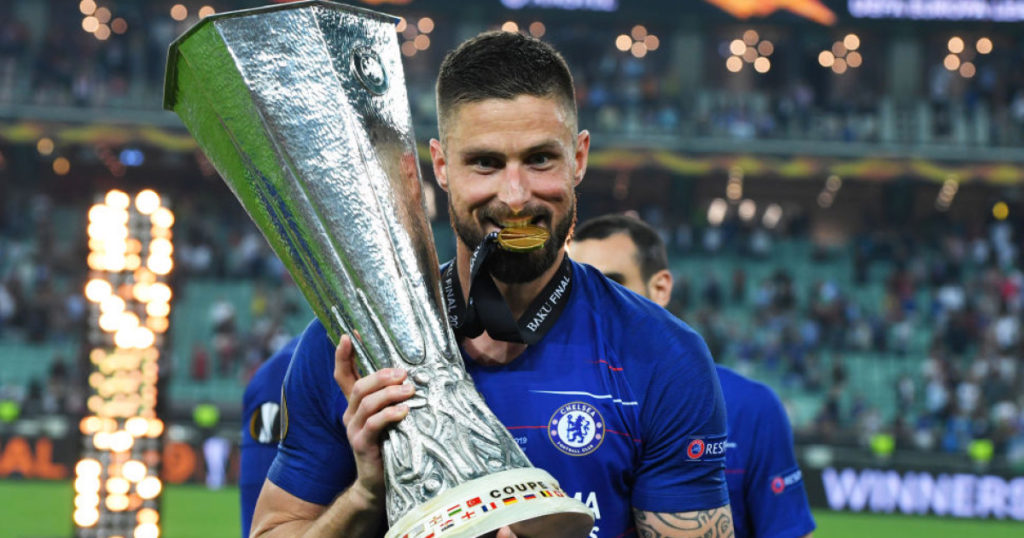 Giroud posing with the Europa League trophy in 2019 after defeating Arsenal in the final. (Image Courtesy: Chelsea / Website)

On perhaps the second biggest stage of continental football in a city that is geographically close to Asia than Europe, the Frenchman opened the scoring against his former side in the 4-1 romp with a wonderful diving header and turned provider with a no-look dinked cross for Eden Hazard’s final goal for the Blues.

He must have made some new year resolutions to score some breath-taking goals that he went on to do against Crystal Palace on New Year’s Day in 2017.

The world had seen a scorpion kick just five days before when Manchester United’s Henrikh Mkhitaryan had scored sumptuously on Boxing Day against Sunderland, but Olivier Giroud went on to score a better scorpion kick against the Eagles from a difficult position.

Alexis Sanchez‘s cross seemed to be going nowhere and the weight of the delivery all wrong, there was no chance a goal could come from this. But Giroud unleased his inner scorpion to score off the underside of the bar, which won him the Puskas Award that year.

If an injury-time winner in the previous group stage fixture was not enough for Olivier Giroud, he went on to score another four in the next against Sevilla, which included a perfect hattrick. 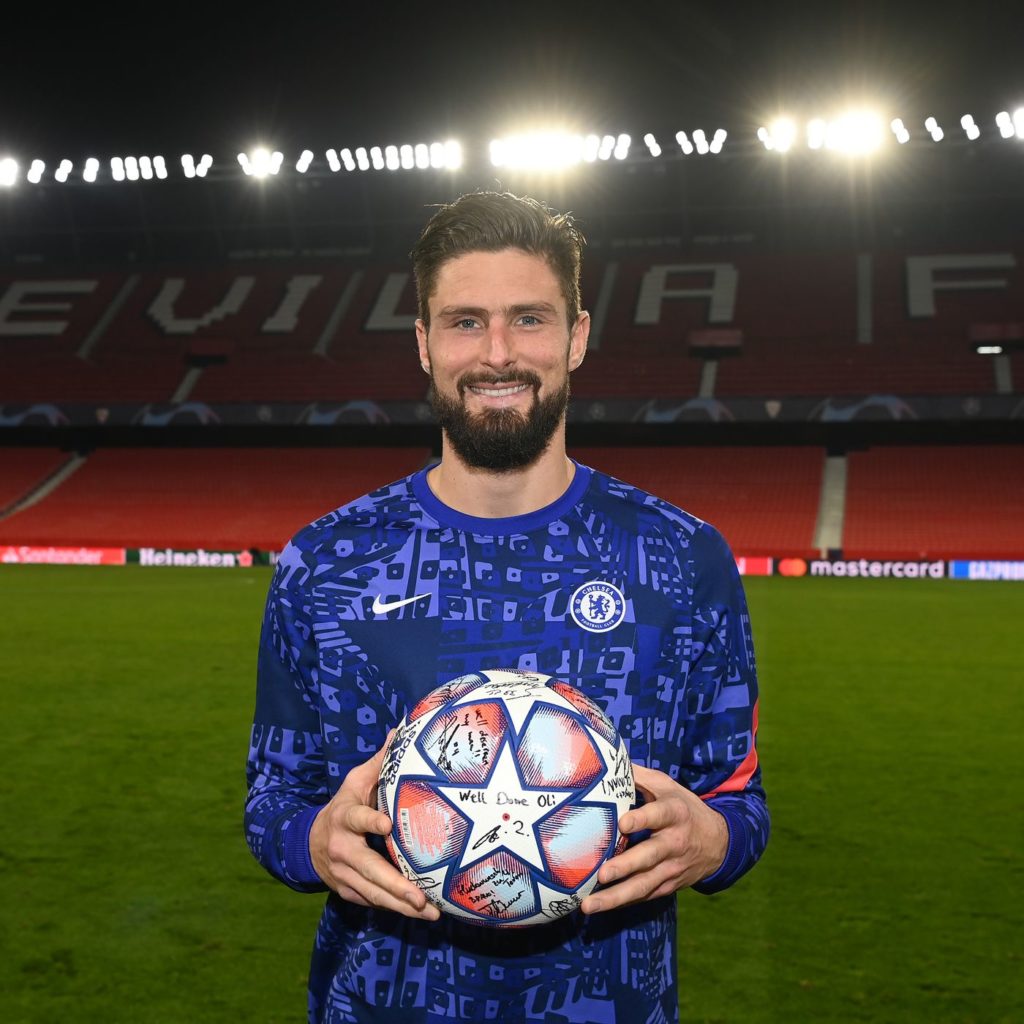 In their fourth group stage fixture, the Frenchman had scored in added time to give the Blues a 2-1 victory over Rennes and bettered that a week later when he put four past Sevilla’s reserve keeper Alfonso Pastor. Those four included a perfect hattrick, the second of his career, and served as a timely reminder of his quality in front of goal.

After finishing unbeaten in the group stage, Chelsea went on to face Atletico Madrid in the Round of 16 of the UEFA Champions League.

And with the first leg away at the Wanda Metropolitano, nobody thought, except for the fans of the Blues, that they would come back from Spain with a point, let alone three points. That was because the Rojiblancos were at the top of La Liga, with a rampant Luis Suarez and a stingy defence, and until the 68th minute, it was 0-0, which was looking good for the side from London.

Giroud’s last goal for Chelsea was a bicycle kick against Atletico on the 23rd February. I don’t think anyone is going to forget it 🔥
pic.twitter.com/n59ZEPksTi

However, the Frenchman had different ideas. Mason Mount was on the break but as the play broke the ball ballooned in the air and Giroud pounced and scored from a bicycle kick that even Jan Oblak, one of the best keepers in the world, could not help but just see it go into the goal.

Maybe it was because of that goal that Chelsea went on to win the whole thing. Just maybe.