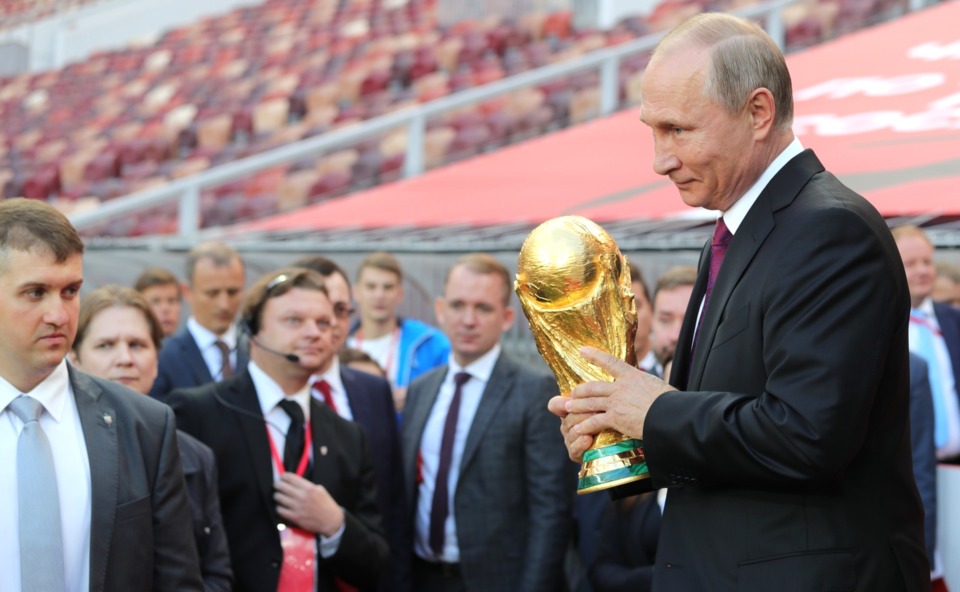 Russia’s World Cup Widely Hailed As Success, But Will The Good Vibes Last For Putin?

The author, Alexey D Muraviev is the Associate Professor of National Security and Strategic Studies, Curtin University. This article was originally published in The Conversation, an independent source of news and views from the academic and research community.

Even before the final whistle had been blown at the 2018 World Cup, the world media were already proclaiming it a huge success. The New York Times asked whether Russia 2018 was the “greatest of all World Cups”, while The Independent gushed the World Cup helped Russia put on its best face, and “the world smiled back”.

There’s little doubt the World Cup has been a massive victory for Russia, and a double win for President Vladimir Putin. For starters, the tournament has imbued Russians with an immense sense of pride. Even though the Russian team lost in the quarterfinals to Croatia, its unexpected success gave the nation a rare reason to celebrate.

This is a big positive for Putin. Despite his overwhelming victory in March’s presidential election – not a surprise considering the main opposition leader was prevented from running – Putin realises he cannot maintain the loyalty of the Russian people forever.

At a time when Russia faces heightened geopolitical tensions, including the indictment of 12 Russian intelligence officers in the US over Moscow’s interference in the 2016 presidential election, Putin is under enormous pressure to show that he can still be an effective leader and deliver results for the Russian people.

For now, Putin is managing to keep his promises to Russians. In May, he opened the Crimea Bridge – one of Russia’s most ambitious and expensive infrastructure projects in decades.

Despite the sanctions imposed by the West, the Russian economy has continued its recoveryand is growing again. A hike in oil prices has led to projections of a budget surplus of 1 trillion rubles (about US$15.86 billion) this year, with another surplus forecast for 2019.

Now, Putin has delivered a successful World Cup that has impressed the world. More than 5 million fans attended the matches, including 2.9 million foreign visitors, which is an impressive figure given all the political controversy that preceded the tournament.

Russia had faced travel warnings, boycotts by some foreign leaders and even radical calls to strip the country of the privilege of hosting the event. There were fears of a politically-motivated backlash against Western tourists, and possible terrorist attacks due to Russia’s involvement in Syria and Ukraine.

However, the tournament came off without a hitch. All the negative publicity before the event kicked off gave way to stories about the football itself and the positive experiences of foreign visitors. French President Emmanuel Macron congratulated Putin on a successful tournament and was captured in a memorable photo wildly celebrating his team’s victory.

With relations between the UK and Russia at a low point over the nerve agent poisoningsearlier this year on English soil, there was even a moving wreath-laying ceremony involving England football fans to mark the 75th anniversary of the battle of Stalingrad, the bloodiest fighting of the second world war.

By and large, the World Cup did what Putin hoped it would – it changed many people’s perceptions of the country. It may prove to be the most significant soft power success for the country in years – even outshining the 2014 Winter Olympics in Sochi.

Back from 2 weeks in Russia alive.
I wasn’t attacked by blood thirsty hooligans, I wasn’t eaten by a bear & I haven’t been poisoned or killed.
The British media should be ashamed of themselves for their clear propaganda against the Russian people. Absolutely class country ?? pic.twitter.com/83sZwjp8Kn

The timing could not have been more perfect for Putin’s highly anticipated meeting with US President Donald Trump in Helsinki on Monday. Even if it fails to produce any positive material outcomes for the Russians, the mere fact that Putin is sitting down with Trump will be seen as another strategic victory for the Russian leader.

This isn’t to say that Putin has nothing to worry about now the World Cup is over. If history is any guide, the gains that Russia managed to score during the tournament may prove to be short-lived.

For one, the government is facing harsh criticism over its recently announced pension reform plan, which will raise the retirement age to 65 for men and 63 for women in 2019. Putin’s United Russia party faces pressure to convince Russians the plan is going to benefit the economy, or else risk voter discontent heading into local elections later in the year.

Putin also has a small window of opportunity to capitalise on the World Cup soft power coup and improve relations with the West. But in this regard, the Russian leader has plenty of doubters.

One only need look at the country’s history of stoking tensions with its neighbours during previous major sporting events to see why the international community has so little faith in Putin. Back in August 2008, while the world was watching the opening ceremony of the Beijing Summer Olympics, a simmering conflict between Russia and Georgia broke out into a full-blown war and led to Russia’s eventual recognition of two breakaway regions in Georgia.

And shortly after the 2014 Sochi Winter Olympics, Russia responded to the ouster of Ukraine’s president by annexing the Crimea peninsula and fomenting an armed rebellion in the eastern part of the country.

The world will no doubt continue to watch Russia’s behaviour closely in the coming months. As investigations continue into its actions in the US elections and the UK nerve agent poisonings, it’s clear the West has no intention of easing its pressure on Putin anytime soon.