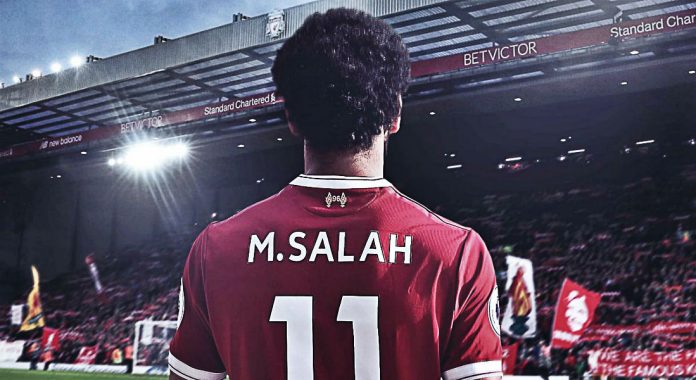 The author, Solava Ibrahim, is a Senior Lecturer in International Relations, Anglia Ruskin University. This article was originally published in The Conversation, an independent source of news and views from the academic and research community.

This is how fans of Liverpool FC cheer Mohamed Salah; record breaking star striker, and winner of the Premier League’s Golden Boot in 2018. For young people in Egypt, though, Salah is more than just a footballer. In a country with growing unemployment and political unrest, Salah is an icon and a role model – he embodies the ideal of a young person who has achieved his dreams.

Salah comes from a small village, Nagrig, in the Gharbia district, where as many as 10% of people live in poverty. Salah’s journey began in the El Mokawloon club in Tanta; from there, he joined the same club in Cairo. Coming from one of Egypt’s rural villages, at the age of 14, Salah had to take at least five different buses every day to train in Cairo.

In 2012, he was spotted by Swiss club Basel, and his successful spell in the Swiss Super League attracted the attention of José Mourinho, who was manager of Chelsea Football Club at the time. But Salah’s time at Stamford Bridge was not very successful; he spent much of his time on the bench. Salah had spells in Italy, with Fiorentina (on loan) and AS Roma, before his triumphant return to the English Premier League, with Liverpool Football Club. In October 2017, Salah scored the penalty that sent Egypt to their first World Cup finals in 28 years.

Over the past ten years, as I have been tracking the aspirations of young people in Egypt, I noted how the same unfulfilled aspirations – to find a job, start a family, get a good education – persisted over time. I have also witnessed how Salah’s journey to success, as well as his hard work and determination, have inspired Egypt’s frustrated youth to overcome the obstacles that they face, and achieve their goals.

Despite his fame, Salah has maintained a close relationship with his family, neighbours and friends in Nagrig. He nurtures this relationship by supporting various development projects in his village, ranging from youth centres to schools and hospitals; and more recently a water and sewage station.

At the national level, Salah donated £210,000 to Tahya Misr (“Long live Egypt”) – a fund established to support developmental efforts following the January 2011 uprising . For Egyptian youth, Salah’s gratitude and humbleness are the traits they admire the most. In the age of brain drain, when as many as 10m Egyptians live abroad, Salah conveys a lesson to Egypt’s migrant youth that they can serve their country – even from abroad.

At a time when Egyptian society is divided, Salah unites not only Egyptian, but also Arab and Muslim youth, too. For years, young people in the Middle East have been stereotyped as either terrorists or refugees. So although they mobilised at an unprecedented level during the Arab Spring uprisings, these days frustrated young Egyptians are more likely to become depoliticised, pragmatic or radicalised.

“Mo Salah put Egypt back on the map,” said one young man on a recent Egyptian TV programme. The display of his boots in the British Museum and his nickname as the “Egyptian King” are evidence that Salah has become an icon for all Egyptians. Improving Egypt’s image internationally is crucial, given its stagnating tourism industry and its negative global image, after the ousting of Muslim Brotherhood’s president Mohamed Morsi in 2013.

What’s more, as a moderate Muslim, Salah provides a new path for frustrated young people to follow. He performs prostration after each goal, fasts in Ramadan, regularly reads the Koran and named his daughter, Makka, after Islam’s holiest city. The image he conveys of a moderate, tolerant Muslim not only challenges the dominant stereotypes about Arab youth, but encourages them to accept each other’s differences and unite behind a single Muslim identity – evident in chants sung by Liverpool fans, such as “I’ll be Muslim too” and “Mohamed Salah, a Gift from Allah”.

The relationship between Salah and his young supporters is reciprocal. He inspires them, and in turn they support him. Salah regularly communicates with his young fans via Facebook, Twitter and Instagram, while they rally to his defence when he needs it. For instance, in a recent row with the Egyptian football association over advertising rights, Salah complained on Twitter about the way he has been treated, and asked for more respect.

In fewer than 12 hours, the hashtag #SupportSalah was trending in Egypt, the president of the football association intervened and Salah thanked his young fans for their support. Former Egypt captain Ahmed Hassan said of the incident: “Salah is not only stronger than drugs – he is stronger than everyone else!” – a reference to Salah’s support of a prominent anti-drug campaign. Following his recent ad, which went viral, the rehabilitation hotline witnessed a 400% rise in calls.

Young people’s dedication to Salah is evident in everyday life in Egypt: from dates and cakes named after him, to Ramadan lanterns, graffiti and portraits of him – not to mention the crowded cafes every time he plays, and the dedicated digital army that votes for him every time he competes for an online award. With their support, Salah was even voted runner up in Egypt’s recent presidential elections.

Salah’s relationship with Egyptian youth is a unique one; he represents their hopes and aspirations and is a model they seek to emulate. As one supporter commented on Facebook: “Search for Salah inside you; you will find him in all domains.”

In a recent TV interview, Salah’s message to Egyptian youth was simple:

You can. Believe in your dream and follow it, no matter what.

This message lives in the minds and hearts of millions of Egyptian youths who see him as their brother, their friend and their role model. When I recently met Mo Salah, I told him: “Mo, you are my inspiration.” Clearly, I am not the only one to feel this way.