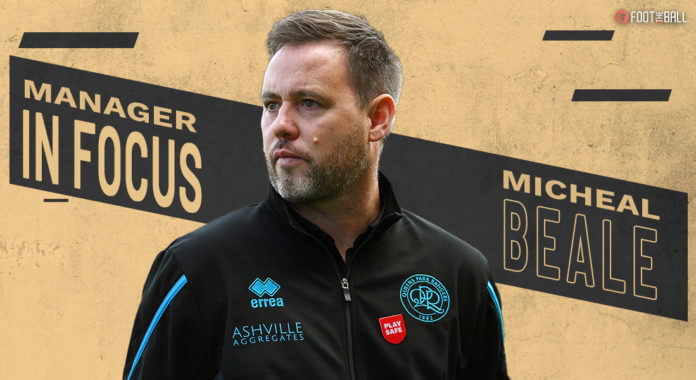 When a new manager or management team arrives at a new club, they are likely to come with a strong idea of how they like their football to be played. However, their own opinion and beliefs are far from the only consideration when implementing a playing style. The culture and history of a club are always going to play a part.

Michael Beale has had the privilege of coaching some of the best young talent in England from the very beginning of their developmental journey. A UEFA A license holder with 10 years experience at Chelsea FC before making the move to Liverpool FC.

He then made the famous move to Rangers as an assistant to a Liverpool legend – Steven Gerrard, before getting hired as the head coach at QPR and now plying his trade at Rangers.

Making up the senior coaching staff in his previous role at Rangers alongside former Liverpool midfielders Steven Gerrard and Gary McAllister, Beale helped guide the Scottish giants to their 55th league title in 2020/21, and their first in a decade. Having led Rangers to second place in his first two seasons at Ibrox, Gerrard and co denied Celtic a record tenth successive title by winning the league in his third campaign there.

Who is Michael Beale?

His playing career only lasted until the age of 21, beginning at Charlton Athletic, he was released in 2021 and trialled at FC Twente along with clubs in the USA before calling it a day. Beale had always been fascinated by the idea of development, and shortly set up a futsal club in his hometown of Bromley, using some of the money he earnt as a youth player.

Beale came through the coach education pathway at a very young age, securing his FA Level 2 and UEFA B through the Kent FA in 2004. He said that it was probably “a bit early” to do his UEFA A license as a 23-year-old but credits the course for helping him “grow up”. Since completing the course in 2006, he believes he has completely changed as a coach.

The transition from London to Liverpool was clearly a big one for Michael. He speaks fondly of his time at Chelsea but appears to be a real Liverpool man. Beale had a ten-year spell at Chelsea, the club where he really learnt his trade.

Beale joined the Rangers first team with Gerrard in 2018 and followed him south to Aston Villa in November 2021, before making the moving in management with QPR in June 2022. He is an ideal coach to turn to for first-hand experience of successfully implementing a playing style with a new team, having played a key role in Rangers’ transformation from also-rans into title winners.

Beale had always been a long-time admirer of South American football and the street football culture it developed specifically, hence his futsal club back in Bromley. Working as an assistant to first-team manager and Tricolor Paulista legend Rogerio Ceni, Beale learnt Portuguese and gained the invaluable skill of being able to coach in a second language.

Beale says that, when it comes to an out-of-possession approach – defending, counter-defending and defensive restarts – he wants his team to “own the pitch”. Defensive success is intrinsically linked to attacking.

He strongly believes that better defensive organisation will mean more possession of the ball. If your team is organised, you will run less, there will be less stress on the players, and they will be more ready to attack when the chance arises.

Whatever the out-of-possession approach – be it a high press, a mid-press or a low press – teams must have the ability to “turn the dial to maximum”. By this, Beale means there must be a collectively known approach through which the team can crank up the pressure on the opposition. This would be most important if the team is a goal down and chasing an equaliser, for example.

Most importantly, a clear defensive approach and commitment to playing that way will create more opportunities to do the things players and fans love most: attacking.

Beale has a long track record of football in his family. He explained how he got into the industry: “Football was always a part of my life. Raymond Harford was my Nan’s cousin and he was an assistant to Kenny Dalglish at Blackburn and had his own successful career coaching at Wimbledon and Luton before that. My Godfather was a guy called Billy Gilbert and he was at Crystal Palace in the team of the 1980s. So, as a young child, I was getting taken to games from the age of two years old to watch Crystal Palace with my Godmother and Godfather”.

Beale has worked at two major clubs in different areas of England – one in London, the other in the North West. He believes that these geographical differences are often displayed in the ways players express themselves on the pitch. “London has a great variety in terms of the type of person you will find,” he says.

“Boys from Surrey are different from boys in inner London so you get a nice mix. You get a lovely style in London, there is a lot of talent in the area and it creates an interesting range of players and playing styles between clubs. In the North, there are fewer people moving into the area, so you have to be a lot more patient – and perhaps we persist better with players who come in at young ages. Jordan Ibe and Raheem Sterling are two players that Liverpool has persisted with from the age of 14.”