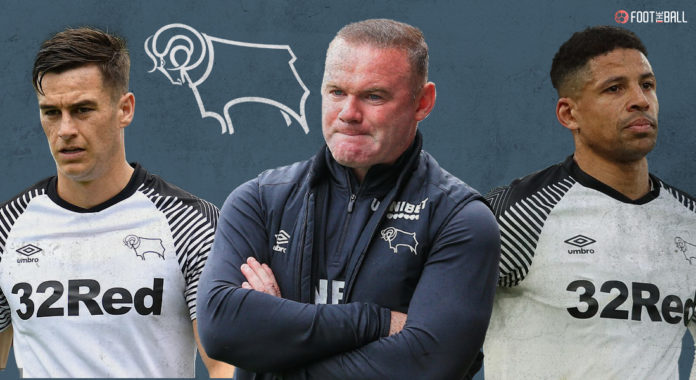 Wayne Rooney is nothing if not a fighter. The Manchester United and England stalwart with Evertonian roots represented all three teams with great distinction during a record-breaking playing career. The Three Lions’ top-scorer in history, who has also spent time in the MLS, began his managerial career in a part-time capacity in November 2020 with Derby County.

One year of @WayneRooney in charge 🖤🤍

Good results gave way to a permanent offer in January 2021 and the work he has achieved since then has been nothing short of tremendous given the circumstances. After narrowly avoiding relegation on the last day of last season with a battling draw against Sheffield Wednesday and results elsewhere going in their favour, the new season was supposed to herald a new beginning.

Wayne Rooney's Derby County have AVOIDED relegation from the Championship and sent down Sheffield Wednesday after that 3-3 draw! 👏

Look what it means to the players! 💪 pic.twitter.com/VAH7bGqxiR

What has transpired instead has been a first-time manager battling a mountain of odds in order to keep his team afloat in the Championship.

Former owner Mel Morris and the club was found to have breached financial rules over the last two seasons and not giving full disclosure of their accounts. The EFL was quick to step in, handing them a nine-point penalty at the beginning of the 2021-22 campaign. Furthermore, the Rams were also forbidden to sign any players on long-term contracts, meaning they can only get loan deals and free agents. A threadbare squad already battling with injuries and an exodus of former regulars had to cobble together from scratch once again.

BREAKING | Derby County have been placed under a fresh transfer embargo ❌ pic.twitter.com/GTGtK48eJu

Rooney signed Richard Stearman, Ravel Morrison, Ryan Allsop, Sam Baldock and Phil Jagielka to provide the much needed experience and veteran mentality. However, the worst news was yet to come. Morris, having failed to sell off his stake in the club or provide the adequate financial backing to EFL was outcast as owner. With no immediate takers, Derby fell into administration that automatically triggered a further 12 points deduction in September. They had taken 10 points from eight games back then but this left them alone at the foot of the table.

A message from the club's administrators to our supporters 🐏#DCFC #dcfcfans pic.twitter.com/89jcWAsvFs

This cast major doubts on whether Rooney would stick around, given the almost impossible task of saving the Rams from relegation. To his credit, he reiterated time and again he was fully committed to see the club through these difficult times and go through the season together.

SOLDIERING ON BUT END IS FAR

35 points, 11th place. That is where Derby would have ideally been right now if not for their financial woes. The reality is the Rams are in 23rd position and eight points from safety. But the job Rooney has done cannot be understated by anyone. Derby have let in the fourth-fewest goals in the Championship, with the top-two and West Brom only ahead of them. Their 11 draws is the most in the division while their seven defeats are the joint-fewest in the bottom half of the table.

Delighted to get our first win of the season last night. Thanks to all the travelling for the fantastic support, never goes unnoticed 👏🏼🙌🏼🐑 #dcfc pic.twitter.com/RWIguwm3Lx

By all standards, Rooney has been trying his best and to their credit, the players have really looked up to the task. The manager has used a variety of formations including 4-3-3, 3-5-2, 4-4-1-1 and the 4-5-1, depending on the kind of opponents they have faced. Their finest hour undisputedly was coming down from 2-1 to win 3-2 over Bournemouth back in November. Derby’s best month was December, picking up three victories from four games but January has been a mixed bag.

AFC Bournemouth had only lost once all season before they visited Pride Park.

Fulham had won seven games in a row, scoring 25 goals in the process.

The spirit from Wayne Rooney's Rams.

Four points from two matches is good yield but exit in the FA Cup at the hands of fellow rivals Coventry had to be deflating. The worry for Derby regarding on-field issues is the fact that they have played two matches more than the teams directly above and below them. Certainly a lot more wins are required to pull off the impossible dream and with the Rams still under a transfer embargo, bringing in reinforcements remains a pipe-dream.

WHO CAN BE THE DIFFERENCE MAKERS?

First time captain Tom Lawrence is the major offensive spark for Derby, whose appointment was rumoured to have caused a minor stir in the camp give his eccentricities of the recent past. His two goals secured the team’s latest win against Sheffield United and Lawrence also scored a brace in that famous win over Bournemouth. Seven goals and three assists is a middling start and Derby will be needing more from their talisman in order to win more.

And this is just perfection 💯

From the finish, to the look on his face 😁

Yet another @TomLawrence99 goal in front of the South Stand 🐏#DCFC pic.twitter.com/182X1P2EAr

Their second-highest scorer in the Championship is surprisingly 36-year-old central defender Curtis Davies with four goals. He has played every match so far, having a passing accuracy of 84%, completing all five of his dribbles attempted and a team high 152 clearances. However, given their solid backline capabilities, creativity up front has been more of a slog.

Tough game today, so it was a really good point! Swansea dominated the ball throughout the game but that being said I think we had the better chances! Another point and clean sheet ⛔️
A welcomed rest now, see you all at Deepdale 👍🏽#DCFC #DCFCFans 🐏 pic.twitter.com/D8PyN3dCrD

Rooney’s side have averaged just 3.2 shots-on-target per match (22nd rank) and have created just 18 clear cut chances so far (23rd rank). Max Bird, Graeme Shinnie, and the other free agents have to step up more if they are to realise Rooney’s vision of staying up.

Former Newcastle United owner Mike Ashley has emerged as the surprising frontrunner to take over the club but a deal is far from being done. A further wrinkle might arise from the fact that Everton have just sacked Rafa Benitez and no doubt Rooney will be linked with the vacant position.

🚨 BREAKING: Roberto Martinez, Rudi Garcia, Frank Lampard, Wayne Rooney or Duncan Ferguson (until the end of the season) are the candidates to succeed Rafael Benitez at Everton. pic.twitter.com/Bv5ZxAdQY0

Though it looks extremely unlikely that he will leave Derby like this in the middle of the season, the extra noise is certainly something they can do without. It has been a very commendable first half of the season and the target of safety is looking just a bit more achievable right now.