Milan derby in the Coppa Italia🔥 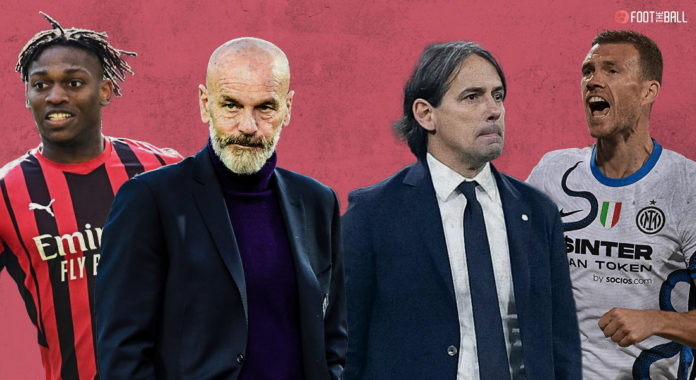 The Coppa Italia is back in action with the semi-final round and the Milan derby is up first on Tuesday. The two teams are locked in a title fight and are looking to add the cup crown to their storied cabinet once again.

Milan hammered Lazio 4-0 in the last round but have fallen off the pace a bit since then. One win and two draws in their last three games, including a 2-2 outing against bottom-placed Salernitana is too great. Stefano Pioli’s side have been the joint second-highest scorers in Serie A with 53 goals with Rafael Leao carrying the mantle from the injured Zlatan Ibrahimovic superbly well.

Milan are aiming to have another standout showing against their bitter rivals, whom they defeated back at the start of February. Milan have won the competition five times in their history, but the last triumph came way back in 2003 when the manager in the opposing dugout was still a player.

Inter have had a very rocky time of late with two draws and two losses in all competitions over the last four games. They have only scored once during this period, and are goalless in the past two league matches against sides who are currently 10th (Sassuolo) and 19th (Genoa). Simone Inzaghi’s fast start to the season has certainly been halted now with Inter slipping up in consecutive weeks to reclaim top spot.

🗣️ #Inzaghi: "We're not getting the rub of the green at the moment" 👇https://t.co/GQz0nTOTMm

Inter are two points behind Milan in second place with a game in hand but know that a lot of hard work is required to stave off the contenders in order to retain their crown. They are the top scoring team with 55 goals and have the second-meanest defence that has been breached just 22 times. It’s been more than a decade that the Nerrazurri were champions of Coppa Italia and they will look to end their drought this time.

Milan have no new injuries to report with Ibrahimovic still nursing his way back from injury and should be back soon.

Robin Gosens is back in training and should be able to finally make his debut for Inter. Joaquin Correa remains out.

Robin Gosens is expected to be in Inter's squad for their upcoming Milan derby in the Coppa Italia semi-final. The German will not start but could make a substitute appearance.https://t.co/reIlBN4Q4J

Milan have several creative players up their sleeves and none a better dribbler than Leao. The Portuguese attacker primarily plays on the left flank but can also double up as a striker through the middle. His eight goals have already equalled his best ever tally, with three goals and an assist coming in just the past four games. Leao looks well set to make a new personal record by the end of the current campaign.

He will be up against Denzel Dumfries who is not too adept on the defensive end of things. Given how Inter have a three man defence, Leao should have spaces once he can isolate the centre backs. That will allow the other attackers to take up their positions and open up chances of scoring more regularly. Leao’s pace will also be key in putting the fear into defenders and giving shooting opportunities.

One of the most exciting additions last season apart from Dzeko has been the free agent from Milan against his former club. Calhanoglu is one of the most creative playmakers in football and has been on fire since joining Inter. The attacking playmaker can operate brilliantly as a box-to-box midfielder who can also drift wide when necessary. Calhanoglu’s accurate passing and set-piece expertise is an added bonus as Roma found out when he scored direct from a corner.

The Turkish international will look to target Alessandro Romagnoli, given he is not the fastest and can be clumsy at times, and his track record proves he has been a menace against most other teams. If he can get a little bit of space to play his natural game and deliver some fantastic crosses, Inter will be in a good position to score which they desperately need to do.

Both the teams head into this epic clash with no wins in their past two matches respectively. So the team wanting to win will need to play exceptionally well and defend even better. FootTheBall predicts a 2-1 win for Milan.