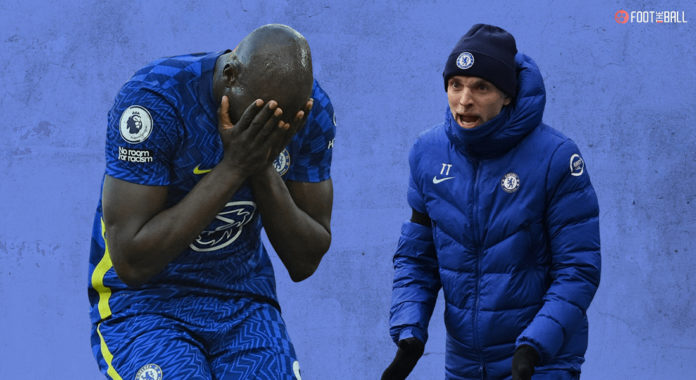 “Physically, I am fine. But I’m not happy with the situation at Chelsea. Tuchel has chosen to play with another system”. These were the words of Romelu Lukaku in an interview with Sky Sports Italia. As expected, it attracted rage from the Chelsea fans as they questioned the Belgian’s commitment to the club.

The Belgian, brought for £97.5 million from Inter Milan, was expected to be the final piece for the Chelsea team. They were dubbed as one of the favourites for the EPL title and Manchester City and Liverpool.

However, now they find themselves 13 points behind league leaders City, albeit with a game in hand. And Lukaku has been one of the critical reasons for that.

The 28-year-old has scored five goals in the league, the 45th best, a disturbing stat for the seventh most expensive transfer in football history.

According to Soccermnt analytics, Lukaku has been rated 47 for attacking capabilities which is good enough for only the 30th position in the league. He also fares poorly regarding common threats (309th in the league) expected goals (40th).

So, how did Lukaku go from Serie A’s second-highest scorer to struggling to start for Chelsea?

The dangerous Lukaku at Inter Milan

When Romelu Lukaku arrived in Inter Milan, he was far from one of the best players in the world. At Manchester United, he scored 12 goals in the league, an average return but not good enough for a player acquired after £75 million.

And United lost patience selling him to Inter Milan, who were looking for a target man. Inter had finished the previous season in fourth but were only the sixth-highest scoring side in the league and needed someone to bring in the goals.

Lukaku didn’t disappoint as he scored 23 goals in his debut season, the third-highest in Serie A behind Ciro Immobile and Cristiano Ronaldo.

Inter Milan scored 81 goals that season, 24 more than their previous season, one more than Lukaku’s tally for the season. It helped them finish second in the league, their best-ever finish since the 2010-11 season.

Despite having one of his best seasons, Inter could not end their 11-year-drought for a Serie A title, and hopes were high for the next season.

Inter did win the league, and Lukaku was at the centre of their attack that season. He scored 24 goals, but what him dangerous was his shot accuracy, as 50 per cent of his shots on target were on goal.

Lukaku formed a dangerous partnership with Lautaro Martinez, which helped them win the Scudetto.

2 – Lautaro Martínez and Romelu Lukaku are the first duo to score 20+ goals each in a single season for Inter Milan since Adriano and Obafemi Martins in the 2004-05 campaign. Partnership. pic.twitter.com/Uj0H1vqmGj

So, what prompted his decline at Chelsea.

The timid Lukaku at Chelsea?

His scoring spree attracted the eyes of various clubs. Chelsea had tried Timo Werner, Tammy Abraham, Olivier Giroud, but none failed to nail a starting role. Lukau fitted the bill as he had been part of the team between 2011-14 and had been their priority target in the 2017 summer transfer window before he was snapped up by rivals Manchester United.

And he immediately hit the ground running at Stamford Bridge with three goals in his opening three matches, including a brace against Aston Villa. He also opened his account in the Champions League against Zenit St. Petersburg.

1.41 – Romelu Lukaku posted a non-penalty expected goals figure of 1.41 against Arsenal, the highest return of any player in the Premier League so far this season. He has put up a higher figure only eight times in 325 games in Europe's top five leagues. Feast. pic.twitter.com/MB5FODjr2c

However, injuries and lack of form derailed his season as he went scoreless in the next eight matches. This also included two spells of injuries and Covid-19 infection.

After scoring in consecutive matches against Aston Villa and Brighton, he briefly managed to find some form but has since gone another five games without a goal.

His performance against Crystal Place broke a record. However, it is a record that no one would like to hold as he touched the ball just seven times against Crystal Palace. This is the fewest touches since data was introduced in the league.

🗣 "If I played last week against Crystal Palace, I'm touching the ball more than seven times."

Paul Merson backs himself to have more of an impact on a game than Romelu Lukaku did last weekend pic.twitter.com/skgvnyf70k

And only one of his touches was not a first-time pass which shows how little time he spent with the ball.

The Crystal Palace ball boy (8) had more touches of the ball than Romelu Lukaku (7) yesterday pic.twitter.com/Lbkkv62kcS

Going back to his infamous interview with Sky Italia, where he said Tuchel had changed the system that was affecting his performances.

So what’s the difference between Inter Milan and Chelsea.

We have to remember that Inter Milan used to play Lukaku and Lautaro Martinez, which they continue to do with Edin Dzeko replacing Lukaku. A system designed to play with two strikes is bound to have a system where the burden of scouring will be left to the two strikers.

They will be expected to be on the end of the ball, and the midfielders and the creative force of the team’s main task will be to feed the ball in dangerous areas.

However, Chelsea plays with a one-man striker who is also expected to participate in the build-up play. In addition, there are players like Mason Mount, Christian Pulisic, Hakim Ziyech and Kai Havertz on the team who are adept at both creating and finishing chances.

This means that Lukaku is no more the focal point of the attack but rather is a part of it and thus is expected to chip in other areas too, which he has failed to do. However, despite his struggles he was the first Chelsea player to score 10 goals in all competition for Chelsea.

This means not only Romelu Lukaku but his teammates have failed to contribute in the attack. Lukaku is an elite attacker in the box and has struggled with being involved in the build-up play, a weakness that has followed him throughout his career.

Of course, he could still turn it around at the cub, but it will take a monumental effort from Romelu Lukaku to do so.