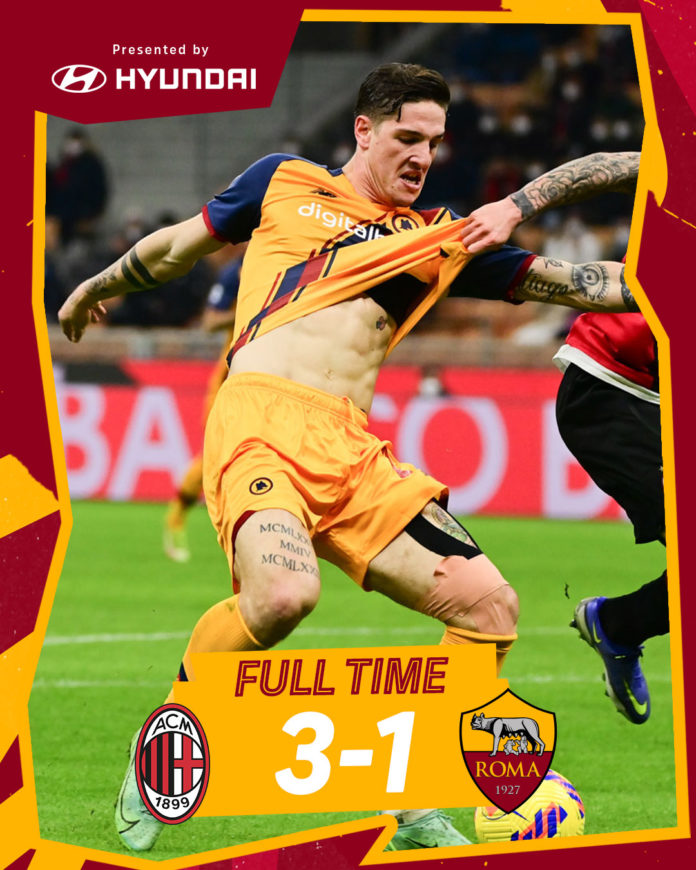 The San Siro was the venue for Roma’s first game of the new year, with the Rossoneri  their opponents.

Milan had the first chance of the match within four minutes, Theo Hernandez’s shot from a half-cleared corner saved by a diving Rui Patricio. However, VAR got involved soon after as Tammy Abraham was adjudged to have flung out an arm inside the box which might have deflected the ball. The referee consulted the pitch side monitor and agreed, with Olivier Giroud tucking home the penalty.

Starting the year with a bang 💥#MilanRoma 1-0 #SempreMilan pic.twitter.com/fim87E6JBy

Roma responded well, seeing more of the ball and getting forward more frequently. However, they were undone by a piece of poor play from Roger Ibanez. The centre-back’s back pass to Patricio was pounced upon by Giroud, whose shot hit the post but the ball came out to Junior Messias who made no mistake, curling his shot into the net.

Roma had their first chance through Nicolo Zaniolo, whose strike from a tight angle was kept out by Mike Maignan. The Italian was looking dangerous, his next strike taking a deflection off Abraham which needed Maignan to produce a superb save. But he was not to be denied a second time, Lorenzo Pellegrini’s low shot brilliantly flicked into the net to halve the deficit. The game devolved into a ruckus towards the final minutes of the first half, but the referee did well to keep ahold of things.

Milan immediately started on the front foot in the second half, Brahim Diaz cracking the crossbar with a fierce strike from just outside the box. At the other end, Abraham was the biggest threat, drawing a solid low stop from Maignan. That was followed by a yet another good save from Henrik Mkhitaryan’s strike following a corner.

Maignan gets down well to deny Tammy. His low shot appeared to be just creeping in.

Things got worse for Roma with Rick Karsdorp picking up a second yellow card with 15 minutes left, hacking down Hernandez. Alessandro Florenzi struck the crossbar from the ensuing free-kick before a third eventually arrived. The two substitutes Zlatan Ibrahimovic and Rafael Leao combined, with the former laying the ball for the latter to run onto and rifle a finish home.

⏱️ 82'
GET IN THERE! A blistering burst from Leão, who keeps his cool and restores our two-goal lead ⚡#MilanRoma 3-1 #SempreMilan @EASPORTSFIFA pic.twitter.com/TUDfnSP6oz

Incredibly, Milan were awarded yet another penalty deep into injury time, as Mancini hauled down Leao inside the box, leading to another sending off. Ibrahimovic missed from the spot but the win was already secured.

They were hungrier, pressing more intently and had the creative things going right from the off. Stefano Pioli’s side were helped by Roma for the opening two goals but the chances did have to be put away. Hernandez’s crisp shot brought about the penalty while the second was a combination of concerted pressure and accurate finishing.

Just six years ago, Junior Messias was playing in Italy's amateur leagues and working as a delivery driver.

In the last two months, he's netted the winner against Atlético Madrid at the Wanda Metropolitano and has scored his first Serie A goal for AC Milan at the San Siro. pic.twitter.com/EBsrviGkh6

Milan had more chances to extend their lead but were uncharacteristically wasteful. At the back, they had Maignan to thank who was in inspired form to protect a shaky defence that did not have the best of nights. Messias and Sandro Tonali were brilliant, helping the home side win well.

On any other day, against any other goalkeeper, Roma would have surely won the match. Even after being extremely vulnerable defensively in the first half, their attackers were causing the Milanese defence plenty of problems. Abraham, Zaniolo and Mkhitaryan were all denied by Maignan time and again, who definitely helped in keeping the visitors ahead.

Tenth Serie A goal involvement of the season for Tammy Abraham ✨ pic.twitter.com/aR5Hwjivsg

Jose Mourinho has complained before of a gulf in class between his starters and reserves which was evident given how reluctant he was in order to change the backline. Karsdorp’s sending off did not help matters as it extinguished all hopes of a comeback before Mancini was saw the red mist too.

There is still no definite lead for the title chasers yet, with Milan now just a point behind Inter. Atalanta had their game postponed while Juventus will be meeting Roma next week after facing against Napoli later tonight.