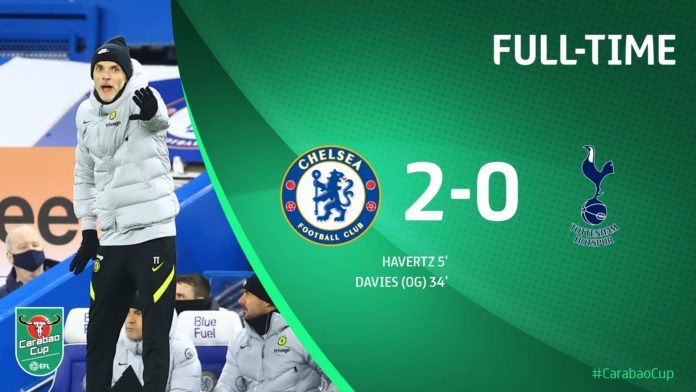 Chelsea welcomed Spurs for the first-leg of the Carabao Cup semi final, in a week riddled with storylines. Romelu Lukaku’s public apology overshadowed the return of former Blues boss Antonio Conte for the first time since leaving.

The home side, having started brightly, took the lead within five minutes. Marcos Alonso robbed Emerson Royal of the ball near his penalty box before slipping in Kai Havertz. The German did well to hold off Japhet Tanganga and his shot deflected off the boot of Davinson Sanchez which rifled it into the net.

Havertz almost added a second minutes later but his strike this lacked the necessary power to beat Hugo Lloris at his near post after a botched clearance from Pierre-Emile Hojbjerg. The game settled down after that but Spurs were still hardly having a decent spell of possession as Chelsea played the game at their own pace.

After a frantic start, the game has settled slightly. Kai Havertz's effort is the difference so far. 👊

It got even worse for Spurs and in more heartbreaking fashion. A curling free-kick from Hakim Ziyech looked easy enough to be cleared by the Spurs defence. However, Tanganga made a real hash of it, heading his clearance against Ben Davies’ face which took the ball past Lloris and into the net. Just over 30 minutes played and two own goals.

Ziyech's dangerous free-kick is headed against his own man Davies by Tanganga and the ball bounces into the net! 😁

Lukaku had a great chance to make it 3-0 but his free header bounced just wide of the goal just before halftime. The Blues were very much on top and looked every bit likely to score again, with Spurs not even registering a shot at the break.

Harry Kane changed that at least within five minutes of the restart, his free-kick producing a solid save out of Kepa. At the other end, Ziyech struck a low strike comfortably held by Lloris.

A much better start to this second half.

Timo Werner, on as a halftime substitute, was playing in terrific fashion and had a glorious chance foiled by Lloris. Ziyech’s delicious through ball found the German near the edge of the box and he tried to lift his shot over the Spurs goalkeeper who was just tall enough.

Saul has been superb for @ChelseaFC tonight 👏 #EFL | #CarabaoCup pic.twitter.com/ak1cFNkUQJ

Bryan Gil had Spurs’ chance of the match as the match was winding down, shooting from a tight angle which had Kepa pull off a strong low save to preserve his cleansheet. There was to be no more late drama as Chelsea picked up a solid win.

Here are the three key takeaways from an entertaining first-leg:

It was pretty evident after a couple of minutes regarding which direction the game was more or less heading. The Blues were on top in all the departments across the pitch, keeping hold of the ball expertly in order to nullify Spurs completely.

If only he could replicate that league cup form in the PL… 😬🇩🇪 pic.twitter.com/u4sFHnd2rE

There were frequent forays of attacking play, resulting in both the own goals and there definitely should have been more. Lukaku had a great chance, Werner made some strong runs, and even Saul had a pop. The defence was hardly ever troubled by Spurs’ front three and Thomas Tuchel can celebrate a deserved win.

POOR, POOR DISPLAY ALL ROUND FOR SPURS

“It’s the history of Tottenham?” Surely tonight must have felt just like that. The first 45 minutes was utterly shambolic, especially in the defensive third. Never mind the two own goals, the defenders themselves were given the run around by Chelsea. Tanganga had a horror show, being mostly at fault for both of those goals while Hojbjerg was also far below his usual sturdy self.

There was little to no service to the front line who were having to drop deeper and deeper in order to pick up the ball. Antonio Conte, to his credit, did change the formation at halftime and Tanguy Ndombele did inject some vitality into the side but to no avail. They now have a moutain to climb if they are to make a second consecutive final.

BLUES PUT A DISAPPOINTING MONTH BEHIND

December was tough for the Chelsea faithful, given a mixture of illnesses, COVID positive players, barrage of draws and of course, Lukaku’s interview. Those issues seem to have subsided quite a bit though N’Golo Kante and Thiago Silva are latest to be stung by the virus. Nevertheless, Tuchel will feel good regarding the upcoming fixtures and how to best go about them.