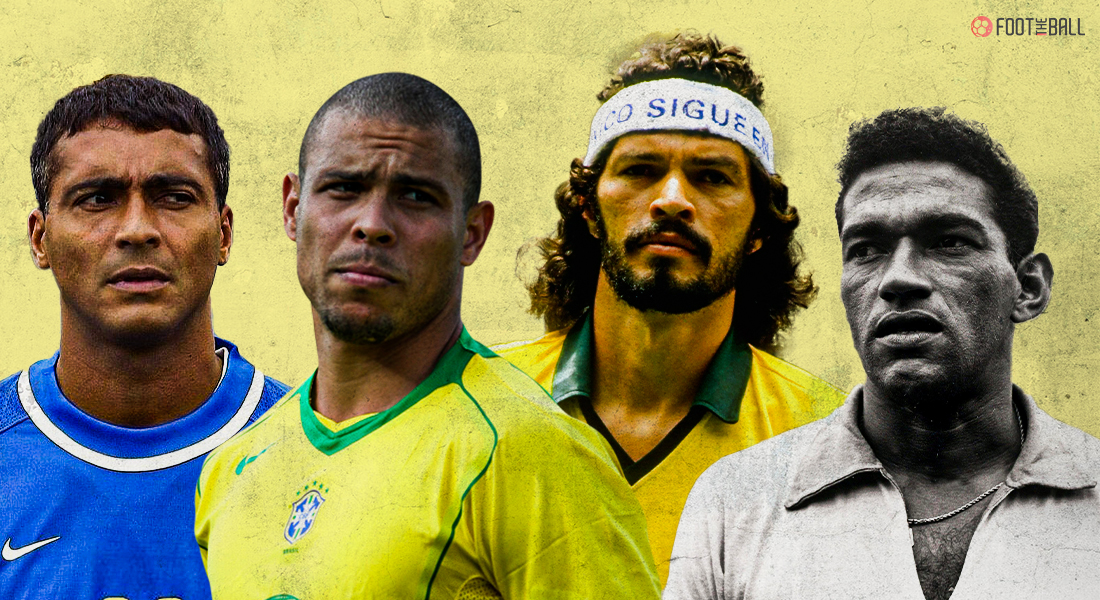 Brazil have been the greatest footballing nation in history. The Samba Boys have a record five World Cups and nine Copa America titles, along with numerous other international honours. They have also produced the most talented and dazzling players to have played the game, for each position on the pitch. With so many record-breakers and legends to choose from, FootTheBall presents the extremely hard-to-compile, Brazil’s all-time greatest XI.

CLAUDIO TAFFAREL- With 104 caps for the national team, the most for a goalkeeper of Brazil, Taffarel has firmly established himself as a national icon in his homeland. He won the 1994 World Cup and two Copa Americas in 1989 and 1997. He was known for his calm demeanour in goal with extremely quick reflexes and a champion in saving penalties.

Taffarel won titles across in Brazil, Italy and Turkey, winning the 2000 UEFA Cup with Galatasaray where he was adjudged man-of-the-match. In 1994, he only conceded three goals excluding penalty shootout as Brazil lifted the famed trophy for the fourth time in their history.

CAFU- Brazil’s most capped player with 142 appearances, Cafu was renowned for his pace, hard work and dynamic offensive runs from right back. The only man to appear in the final of the World Cup for three consecutive editions from 1994-2002, Cafu was the captain in their fifth title triumph, their last till now.

#OnThisDay in 1990, two-time #WorldCup winner Cafu made the first of his record 142 appearances for Brazil 🙌

The rest is history… 🏆🇧🇷🏆 pic.twitter.com/L4oZwrA2iP

He was also a serial winner at the club level, racking up 20 team honours along with a whole host of individual ones. His leadership skills and cheerful attitude in the dressing room made him a favourite amongst his teammates and no doubt, Cafu remains one of the top defenders in his country’s history.

LUCIO- A 2002 World Cup winner, Lucio was the rare centre back who was also very efficient with the ball. His great range of passing and surging forward runs along with an aerial dominance helped in establishing himself as one of the top rated defenders in the 2000s. He was also part of the famous treble winning team of Inter Milan in 2010, while also winning titles in Brazil and Germany.

Lucio made 105 appearances for the Samba Boys and apart from the World Cup, he also helped Brazil win the Confederations Cup in 2005 and 2009 with a whole host of star names.

CARLOS ALBERTO- Carlos Alberto was the captain of the 1970 World Cup winning squad where he scored one of the most iconic goals in tournament history. Running onto a layoff from Pele outside of the penalty box, he rocketed the ball home.

Known for his leadership skills and acumen for penalties, Alberto is best remembered for helping Brazil recover from their dismal performance in 1966, while also playing over 400 games for Santos. Though he played only 53 times for the team, it was enough for the player to become a legend for a nation seemingly full of them.

ROBERTO CARLOS- The master of free kicks throughout his career, Carlos is most vividly revered for his iconic “banana free kick” against France in 1997. However, that barely scratches the surface of the genius player. Carlos has 125 appearances for Brazil to his name and won the 2002 World Cup with them, along with two Copa Americas.

The Brazilian is also a Real Madrid legend, helping establish the club into the force it is today. His supreme pace, ability to cross, and ferocious shooting accuracy made him the top left-back in the game throughout his storied career.

ZICO- Nicknamed the “White Pele,” Zico is considered one of the best players not to win the World Cup. That does not diminish the fact that the diminutive playmaker was one of the greatest to play the game. Zico was famous for his exquisite passing, technical skills and tricks along with his accuracy from set pieces.

#Zico didn’t win the #WorldCup with #Brazil but has been champion many times in his life, he was part of one of the best selections ever. He taught #Japan to play football, was a World Champion with #Flamengo and charmed #Italy by playing for #Udinese. Zico, forever Zico! pic.twitter.com/aM35IXIAjr

Indeed, his 48 goals from 71 appearances for the national team speak to one of the most prolific goal scoring ratios ever with Zico distinguishing himself at club level also. He won all major trophies in Brazil at the time with Flamengo and racked up a litany of other individual accolades.

SOCRATES- “Doctor Socrates” due to his medical degree and political correctness, the midfielder was one of the most intelligent players to play the game. Socrates orchestrated the play from the middle of the pitch with his visionary passing and link-up play. Not to mention he was also extremely cool and one of the most stylish players of his time.

Brazil's captain at the 1982 #WorldCup, the late Socrates was born #OnThisDay in 1954. #RIP #Legend https://t.co/isRLXdSuJP pic.twitter.com/UjEm3EASn0

A hero for Brazilian club Corinthians, he helped them win the Sao Paulo League multiple times. Along with Zico, he was another key figure of the 1982 World Cup team, widely considered to be the greatest to not win the World Cup.

GARRINCHA- Considered one of the greatest dribblers of all time, Garrincha inspired millions of Brazilians with his play and positive attitude on the pitch. The “bent-legged angel” was part of Brazil’s first two World Cup wins in 1958 and 1962. In the latter, with Pele injured, Garrincha guided the team through to a famous victory while also becoming the first player to win the Golden Ball, Golden Boot and the World Cup in the same tournament.

#Garrincha in the 1962 World Cup final between #Brazil and #Czechoslovakia.#WC1962 pic.twitter.com/tb6kL1JBkW

His ball control and eye for goal made him a threat from the flanks, and he also led his long-time club Botafogo to countless trophies on his way to making 600+ appearances.

ROMARIO- The first of three prolific strikers on the list, Romario was a master of close range finishing and goal poacher who also possessed supreme speed and balance. He won the 1994 World Cup and was awarded the Golden Ball for his efforts throughout the tournament. With 55 goals in 70 appearances, he is the fourth-highest goal scorer for the national side but it was at club level where he really established himself.

Romario scored 165 goals in 167 games for PSV, winning the league title thrice while he was also a key cog of Barcelona’s “Dream Team” under Johan Cruyff through the 1990s.

RONALDO NAZARIO- A Ballon D’Or winner and scorer of 200+ goals before turning 23? That was Ronaldo for you. The forward was one of the most standout attackers of his time, widely praised for his direct running, excellent movement with the ball and finishing acumen. He won silverware across the Netherlands, Spain, Italy and native Brazil.

He achieved what many thought impossible and helped Brazil win their fifth World Cup title. Netting twice in the final – a Man of the Match performance.

Ronaldo scored against every opponent in the tournament except in the quarter-finals against England. pic.twitter.com/VQdS1lGx70

With the national team, he won two World Cups (1994 and 2002), winning the Golden Ball at the former and Golden Boot at the latter while also receiving another Ballon D’Or in 2002. Ronaldo also won two Copa Americas (1997 and 1999) and has 62 goals from 98 appearances for the Selecao.

PELE- The greatest player of all time, Pele is the record goal scorer in world football with more than a 1000 goals in total. Santos’ all-time leading scorer, Pele led Brazil to three World Cup triumphs (1958, 1962, 1970), a record for a player. Pele was the master of his craft, with his ability to score from anywhere in the forward line mixed with his speed and penchant for the spectacular.

The only man to have won the #WorldCup three times 💪 pic.twitter.com/VORO4mdcyT

He was also championed as one of the first black athletes to succeed so widely across the globe for his exploits on the international stage. For the national team, he has scored 77 goals in 92 appearances and is widely celebrated for being the most beloved icon in Brazil.