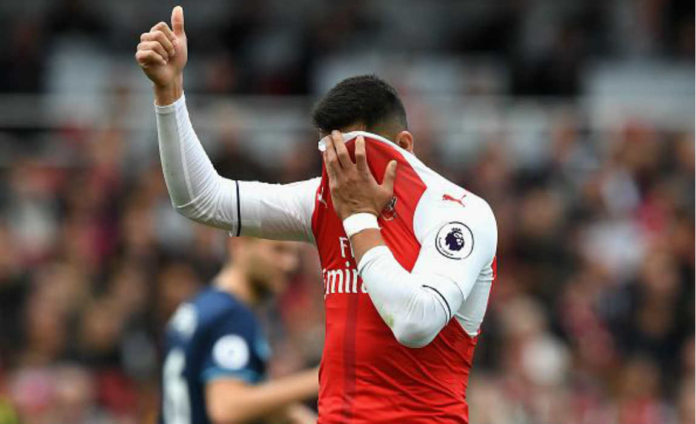 Arsenal have offered Alexis Sanchez a new contract worth £300,000-a-week, according to reports.

In a desperate bid to ward off the likes of Manchester City and Paris Saint-Germain, the Gunners have pushed the boat out in a big way.

But as yet there is no indication if he will accept this new offer.

Manager Arsene Wenger has remained adamant that he will keep hold of his star man, and has refused to accept he will be sold this summer.

That is despite the 28-year-old only having a year left on his current deal.

Meanwhile Wenger has confirmed Sanchez will not feature in the side’s Premier League opener tomorrow (Friday) against Leicester after picking up an abdominal strain on Sunday morning.

Sanchez was in the stands for Arsenal’s Community Shield shootout win over Chelsea on Sunday, having returned to London Colney to catch up on training.

He has also had an extended period of time off following Chile’s Confederations Cup campaign over the summer.

Wenger was speaking to the media in the first pre-match Premier League press conference of the season.

The Frenchman said: “Sanchez had an abdominal strain he caught on Sunday morning before he came to Wembley.

“He had a scan two days ago and is out for a while. One or two weeks.

“Always for us Alexis Sanchez is a loss.”

However, speculation has been rife Sanchez, 28, will leave the Emirates this summer, even though Wenger has told the player he will have to see out the remaining 12 months of his contract.

According to reports Manchester City and Paris Saint-Germain are the two clubs in the frame to sign Sanchez, should he leave North London.

Although Dani Alves has reportedly been engineering a reunion with Sanchez after former Barcelona team-mate Neymar joined the Ligue 1 club for a staggering £198million.